November 15, 2012
2
T-58VD - an experimental fighter developed at the Sukhoi Design Bureau, having a short take-off and landing. This machine to improve the Su-15 had nothing to do. The T-58VD was used as a flying laboratory under the program for creating the T-6-1, an attack aircraft with a short take-off and landing, from which the Su-24 front-line bomber leads its pedigree. At that time in the world the idea of ​​improving takeoff and landing characteristics by installing additional PDs (lifting engines) was very popular. For example, in France, the experimental Dassault Balzac was tested, in England - Short SC.1. It was necessary to pay for the improvement of take-off and landing characteristics by reducing the combat load and significantly reducing the flight range, however, the inefficiency of the chosen scheme did not seem obvious then. This was a "growth disease" of the military aviationsymptoms of which have been noted in various countries. 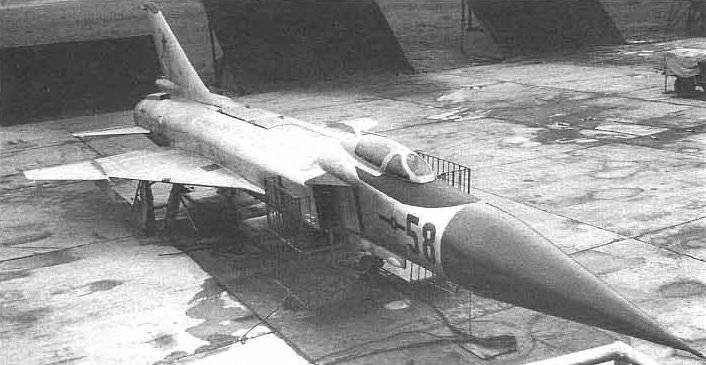 6 May 1965 of the year issued an order from the Ministry of Anti-Monopoly Policy, according to which the Sukhoi design bureau was entrusted with the construction of a flying laboratory for field inspections of FOC regimes. The car was given the designation T-58VD. The plane was created on the basis of the first experienced fighter Su-15. In this case, the aircraft fuselage was modified. Between the air channels, in one row, at an angle of 10 degrees to the vertical, 3 elevating engines RD-36-35 (thrust of each 2540 kgf) were installed. The upper part of the fuselage was equipped with two opening air intake flaps: the front for one engine, the back for two. At the bottom of the set managed profiled blinds, having two working positions, ensuring the deflection of the jet of gases. The construction of the T-58VD was completed in December 1965 of the year, after which the mining on the special stand began. The stand was a platform with a metal coating, to which the aircraft was moored, as well as the NK-12 engine, installed in front of the platform as a fan, creating a kind of shaped wind tunnel. The flow at the exit of the pipe made it possible to simulate the run-up of the aircraft at speeds up to 400 km / h. Bench tests allowed to work out all the main systems of the T-58VD fighter. Unfortunately, it didn’t go without state of emergency: in February, 1966 of the year Ukhov died, a power plant laboratory mechanic who inadvertently approached the nose of the aircraft when the fan unit was in operation.

26 April 1966, the aircraft was relocated to LIiDB. Leading test engineer left Yarkarkov, and Solovyov was appointed the leading pilot. In June, conducted taxiing and approach with the inclusion of PD. 6 July Solovyov performed the first flight on the T-58VD, with the lifting engines are not involved. Flight tests with the inclusion of PD started in late July. Until the end of the year, 19 taxiways and fly-ins were carried out, including taxiing on a dirt lane and 37 flights. It was found that with lift engines turned on, the take-off speed decreased from 390 to 285 kilometers per hour, and the landing speed decreased from 315 to 225, the takeoff length decreased from 1170 meters to 500, and the run from 1000 meters to 560. On takeoff, the aircraft's behavior with the included lift engines practically did not differ from the usual Su-15. However, landing, performed at lower speeds, was significantly hampered by a significant converging moment, to eliminate which it was necessary to turn off the front RD-36-35.

Tests of the experimental aircraft continued until the end of 1967 year. They showed that the benefits derived from improved takeoff and landing performance are overlapping with disadvantages. The jet of hot air from lifting engines had a negative effect on the elements of the car, the runway and did not allow the payload to be hung under the fuselage. Significant also were the reduction in weight output and the reduction in fuel reserves (3970 kg). In addition to Solovyov, only Ilyushin flew on T-58VD, having performed an 1967 flight in March 3, in preparation for the testing of an experienced T6-1. In the period from 1968 to 1969, the flying laboratory flew sporadically into the air, then LIiDB stood "at the fence" for a long time. In 1976, it was transferred to MAI for use as a training tool. However, the T-58VD century turned out to be short-lived there too: already in 1980, it was cut for scrap.