November 13, 2012
47
Over the past few years, the command of the airborne troops has been “fighting” with the leadership of the Ministry of Defense for a new combat vehicle. The BMD-4M airborne combat vehicle has become the subject of controversy almost at the level of its concept: both sides require mutually exclusive characteristics from it. One of the last News about BMD-4M appeared in August this year. Then the First Deputy Minister of Defense A. Sukhorukov said that the Ministry of Defense would not purchase these military vehicles because of the level of protection that military officials considered insufficient. Now, against the background of rearrangements at the top posts of the Ministry of Defense, the BMD-4M theme can again become relevant and, in addition, the attitude towards the new car can change. 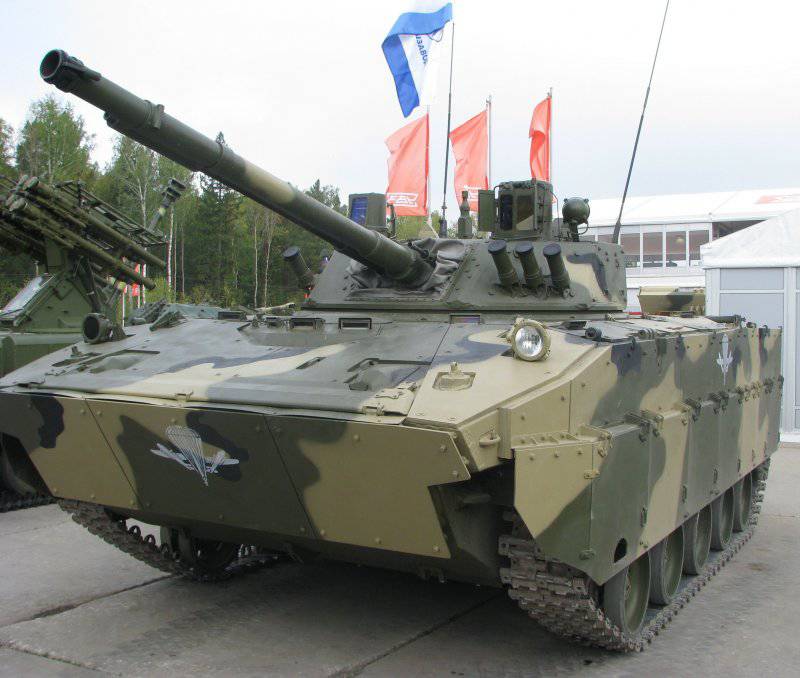 According to august statements by Sukhorukov, booking a BMD-4M does not provide an adequate level of protection against shells and mines. The first deputy minister was supported by other heads of the military department. However, the commander of the Airborne Forces, Colonel-General V. Shamanov, did not agree with such a “verdict”. He believes that the airborne troops have long needed a new combat vehicle and the BMD-4M fully satisfies the requirements put forward by the guidance of the "winged infantry". As a result of this clash of opinions, and four and a half years after the presentation, the new model of the assault vehicle remains a prototype with not very clear prospects. Let's try to understand the conflict and understand what could be the way out of this situation.

The armored class of the airborne assault vehicle is a Soviet innovation, proposed to increase the strike power of the airborne units. Created in the sixties of the last century, the BMD concept implied the creation of a relatively light airborne assault vehicle with the ability to fully participate in the battle, including against heavy armored vehicles. The further development of that old concept was eventually BMD-4M. Since the development of BMD-1, the appearance of this class of technology has changed significantly. In particular, the combat weight (13,5 t in BMD-4М versus 7,2 in BMD-1) almost doubled, and firepower increased. So, instead of the 73-mm cannon, the new assault vehicle has an 100-mm gun launcher, an 30-mm automatic cannon and a machine gun of the 7,62 caliber mm. As a result of such transformations, the firepower of the new machine has increased significantly.

The price for better weapons was a relatively large mass of combat. However, even with the weight of the machine in 13 tons, the Il-76 transport aircraft can transport and airborne two BMD-4М at once. In addition, one of the prerequisites for weight gain was the best level of protection. However, even more protected airborne combat vehicle did not suit the leadership of the Ministry of Defense. At the same time, a further increase in protection will lead to the weighting of the entire machine, which will not allow it to meet the requirements of the Airborne Forces in terms of landing capabilities.

In general, the main controversy surrounding BMD-4М is precisely the balance of protection and weight. Wherein история Soviet, and then the Russian airborne troops did not allow to verify the loyalty of a particular point of view in practice. Rather, the BMD of the old models participated in the conflicts; they did not succeed in working in the conditions of the large landing operations for which they were originally intended. In Afghanistan and Chechnya, airborne combat vehicles were most often used as another version of an infantry fighting vehicle, which had corresponding consequences. For example, BMD-1 and BMD-2, which is not surprising, were vulnerable to anti-tank grenade launchers. For this reason, there were demands to increase the level of protection, even at the price of amphibious capabilities, which in fact turned out to be unclaimed.

Judging by the statements of the leaders of the Ministry of Defense, they want to get some kind of tracked vehicle with weapons no worse than that of the BMD-4M, counter-booking and anti-mine protection. It is quite obvious that with such requirements it is almost impossible to “meet” the combat mass suitable for landing from aircraft. However, the Ministry of Defense stands its ground. Recently, Deputy Prime Minister D. Rogozin spoke about the promising airborne assault vehicle. He considers the BMD-4M to be a good car, but he agrees with the military about its armor protection characteristics. As for the resolution of disputes between the airborne forces and the ministry, Rogozin sees the solution to this problem in creating a new car that meets all the requirements. The Vice Prime Minister confirmed that at the moment, on the basis of the Kurganets-25 armored platform, a new airborne assault vehicle is also being developed.

Probably, the design of a new armored vehicle for the landing force is another factor that hinders the adoption of the BMD-4M. And, apparently, at the present time, the design of Kurgan is the main cause of all the problems of BMD-4M. Meanwhile, the airborne troops continue to update the existing fleet of equipment due to repair and modernization. In the near future, all available BMD-1 in the troops will be brought to the state of BMD-2. It is expected that this alteration will allow at least a little update of the fleet of airborne vehicles and increase its combat capability. In other words, while there is no Kurganets BMD, and BMD-4М does not meet the requirements of the Ministry of Defense, Russian paratroopers will have to use old BMD-2, including those converted from the machines of the first model.

Rogozin also made an interesting proposal for equipping the Airborne Forces with new equipment and features of its application. According to the experience of foreign countries, he proposes to arm the "winged infantry" not only with airborne combat vehicles, but also with light armored vehicles, such as the "Tiger" or "Lynx". At first glance, this alternative looks far from complete. However, it is worth remembering that the vast majority of the landing of armored vehicles belongs to the teachings. In real conflicts, the Airborne Forces almost always acted in the same battle formations with motorized infantry and tank crews. This fact may affect the revision of the entire concept of the use of airborne troops, followed by a complete change in their goals, objectives and methods of combat work.

And yet no one is going to change the look of the Airborne Forces and significantly recycle any documents related to their structure, weapons, etc. In general, the situation that has developed around a promising combat vehicle for the landing forces resembles a classic dispute between those who will use the equipment ordered and those who will pay for it. Judging by previous statements and processes, the last word in the retooling of the Airborne Forces will be not the command of this kind of troops, but the General Staff and other structures of the Ministry of Defense. And it is unlikely that the final decision will be in favor of the long-suffering BMD-4M.