November 12, 2012
4
The new jet carrier-based aircraft was developed on the basis of the Vampire fighter. In the initial project, he received the new Ghost MK.10Z turbojet engine and received the name “Vampire FB.Mk.8”. The development was carried out from the 1947 of the year, when an order for the creation of a small series in the 30 of the Sea Venom machines for the arming of aircraft carriers Bulwark and Centaur is being given for a shift in service with the Sea Hornet. At the same time, the company “de Havilland” has already designed its double version “Venom NF.M.K.2”, a night-weather all-weather fighter with a radar station, based on a single-seat fighter.

It is this modification that becomes, after successful tests, the prototype for the development of a deck-based aircraft. The first prototype was named “Venom NF.MK.20”. It was equipped with units and mechanisms that allow starting from a catapult and landing using a brake hook. The tests began to pass two prototypes.

In the following prototypes, devices for folding the tips appeared, the chassis shock absorbers perform with a wide stroke, bumpers were installed under the keels to protect the plumage during takeoff / landing.

The first departure of the Vampire fighter with the Ghost MK.103 engine made 02.09.1949 of the year and later became the basis for the creation of ground-based serial fighter aircraft (BBC). The first flight of the prototype of the deck aircraft Sea Venom took place on 19.04.1951 of the year. 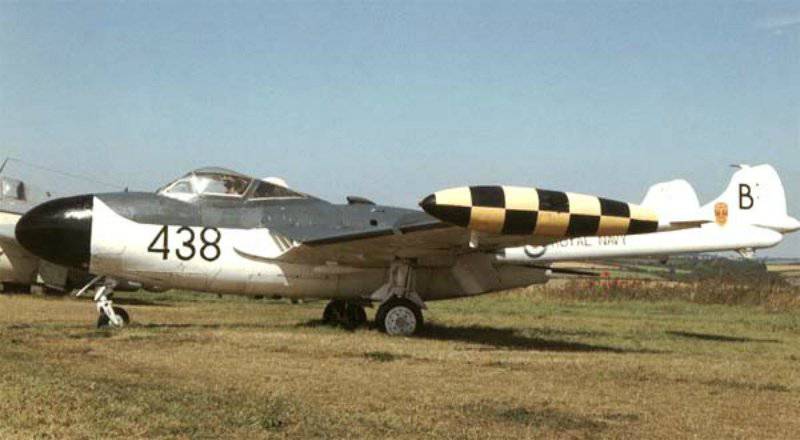 The crew of the prototype consisted of a pilot and navigator-operator of the radar, sitting in the cockpit, one after the other under the lantern tilting back. A month later, the deck prototype entered with the composition of the experimental squadron under the letter "C". Begin testing of landings on marine carriers on the brake hook.

The first prototype crashes the 27.08.1952 of the year. The plane, after the ejection start, was never able to gain altitude and crashed through 5 kilometers. The second prototype successfully continued test flights and landings — made the first night landing on an aircraft carrier. At the start of the 1953, the prototype went through an upgrade and continued to carry out test flights. In the 1954, on the prototype, we completed various test flights. In 1956, the aircraft is disassembled for parts.

The first DH.112 Venom, under the symbol FB.Mk.1, entered the Air Force in the second half of 1952. He also entered service in the German Air Force, some countries of the Middle / Far East, New Zealand. The following modifications of the NF.Mk.2 / 3 made already as night 2 local fighters come into service in the 1953 year. They were also in service with the Swedish Air Force. Switzerland at one time acquired a license for the production of "Vampire FB.Mk.6". In 1953, Switzerland began the production of a batch of these aircraft, which were upgraded to the basic version of the FB.Mk.1 "DH.112 Venom". In addition, the Swiss designers made modifications to the nose with the installation of UHF communication equipment. In the design of the aircraft, the center section was strengthened to ensure the possibility of arming with NAR units. Standard guns received blocks of collections of slug tapes.

Sea Venom
The first production deck aircraft were called "FAW.Mk.20." It was provided with a reinforced structure for the operation of take-off from the catapult, the folding parts of the wing received power drives, and other equipment and mechanisms characteristic of use aviation from marine carriers. This modification entered service in 1954. In the future, it is also adopted by the French and Australian Navy. 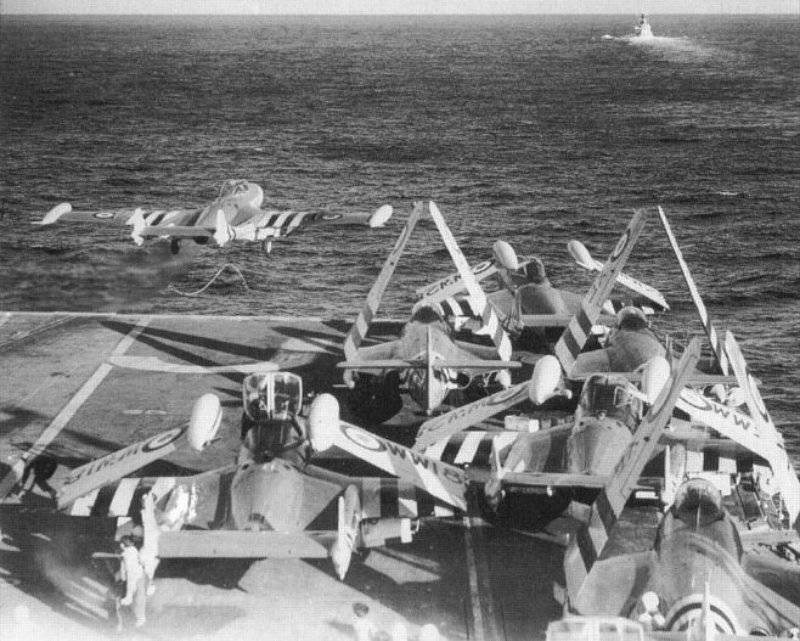 Device and construction
FAW.Mk.20 carried the asymmetrical 2 lanterns of the local cockpit, the equipment designed for the marine version. In the third modification, the lantern provided an emergency discharge system (ejection seats). To be able to take off from the deck of the most loaded aircraft on the tail beams, 6 powder accelerators were installed. The turbojet engine was installed in the stern of the fuselage, air intakes were made in the wing root, which ensured good traction for the established turbojet engine. In the nose of the aircraft there was enough space for the placement of the radar "AI Mk.10". Racks were hydraulically retracted into the wing (main) and into a special compartment located behind the radar (front). There are flaps and two-section air brakes on the wing.

Armament of the serial "Sea Venom" - 4 X-gun caliber 20mm with a total ammunition 600 shots. The guns were located at the bottom of the cabin. Under the wing there were holders for the suspension of NAR or aerial bombs, total weight 900 kilogram.

Aircraft Development - Modifications
FAW.Mk.20 learned a rather complicated machine during operation, therefore instead of the required 60 machines only 50 machines were serially released. The following modification “FAW.Mk.21” is launched into the series. The deck fighter-bomber received an improved engine “Ghost Mk.104”, a reinforced chassis, an updated brake hook, a new pilot seat providing better visibility and a new American-made radar APS-57. The first production aircraft of this series took to the skies in the 1954 year. In total, the FAN.Mk.170 21 aircraft were produced. 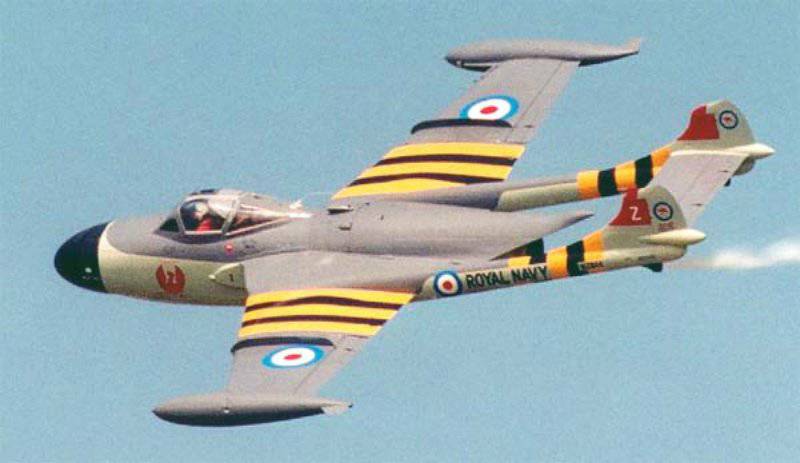 The next modification, “FAW.M.22,” began to be produced in the 1955 year. In the 1956 year, part of the FAW.Mk.21 aircraft was brought to this modification. The aircraft receives an improved engine “Ghost MK.105”, which provided the best lifting speed (the maximum flight altitude in 12.2 kilometers was reached in 12 minutes). In 1957, the airplanes of all modifications of the Sea Venom were heavily exploited - the Suez Crisis military conflict. 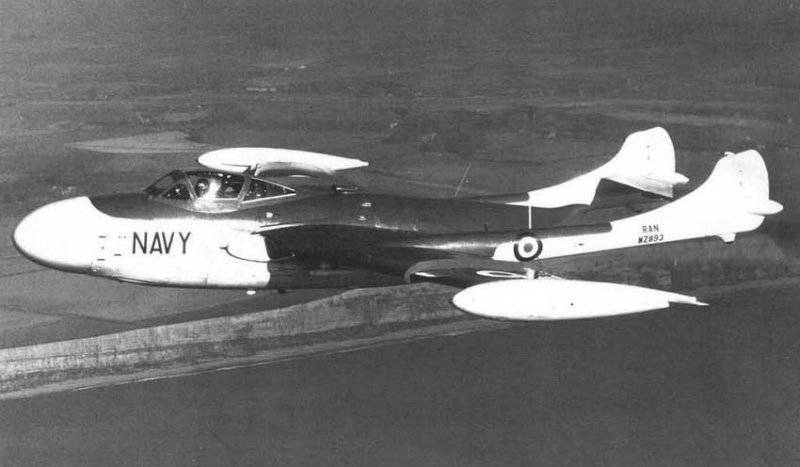 The fate of the "Sea Venom"
The last decked Sea Venom was decommissioned from fleet in 1965. However, many copies remained "in the air" as training or test aircraft. The last training aircraft was decommissioned in 1970. The combat service of the Sea Venom series aircraft is over 16 years old. It was used in all the conflicts of the 1950s by the countries that had it in service. Being the forerunner of the Vampire, it itself eventually became the basis for the creation of the decked twin-engine aircraft Sea Vixen. 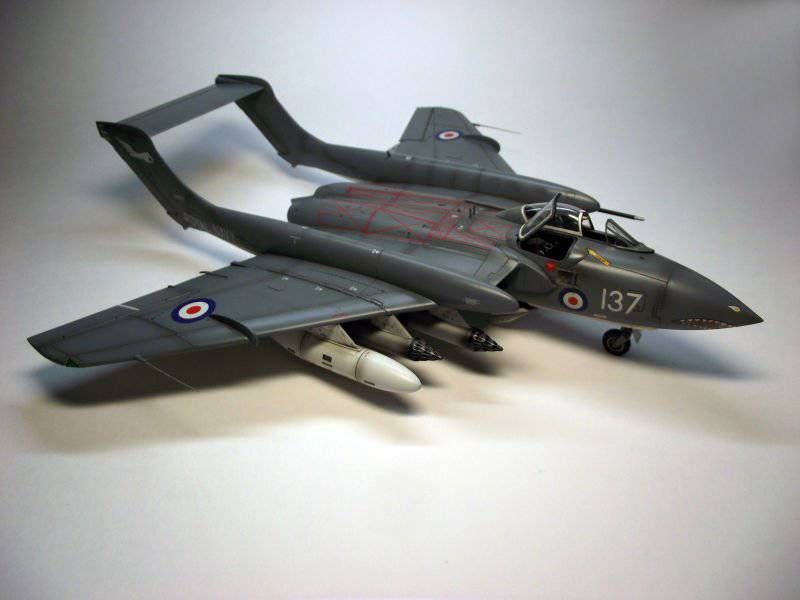