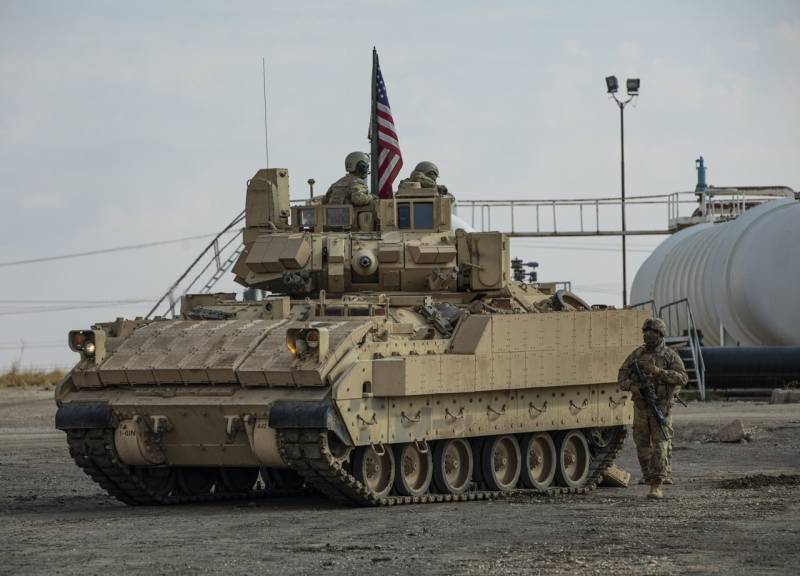 Bradley M2A3. They can make real competition to the BMP-3. But American infantry fighting vehicles in this modification are unlikely to appear in Ukraine. Source: vk.com

Until now, NATO has refrained from supplying armored vehicles of its own production, equipped with at least minimal cannon armament. The legacy of the Soviet Union is coming to Ukraine, which, unfortunately, is still enough in Eastern Europe. According to the most conservative estimates, tanks and infantry fighting vehicles from the stocks of the countries of the Eastern bloc will last until the end of 2023. Of course, if the NATO military-industrial complex manages to replace donations to Kyiv with modern equipment. From here, information from an unnamed person in the US government about the possibility of supplying the BMP M2 Bradley to Ukraine looks quite unexpected. Recall that earlier the Americans sent Kyiv a lot of M113 tracked armored personnel carriers and M1117 wheeled armored personnel carriers. The heaviest armament of these vehicles was a 40-mm Mk 19 automatic grenade launcher - otherwise they were infantry fire support vehicles, nothing more. And now they are talking about the M2 Bradley, and immediately in iridescent colors. For example, analyst Mark Kanchian, who once worked in the White House, argues that

"The Bradley will provide a significant increase in ground combat capability because it is essentially a light tank."

It is possible and necessary to argue with such self-confidence of the ex-official, but not this time. The M2 Bradley is a typical NATO-standard infantry fighting vehicle developed during the height of the Cold War and tailored to combat Soviet armored vehicles. Of course, in addition to the main tasks - fire support for tanks and transportation of manpower. 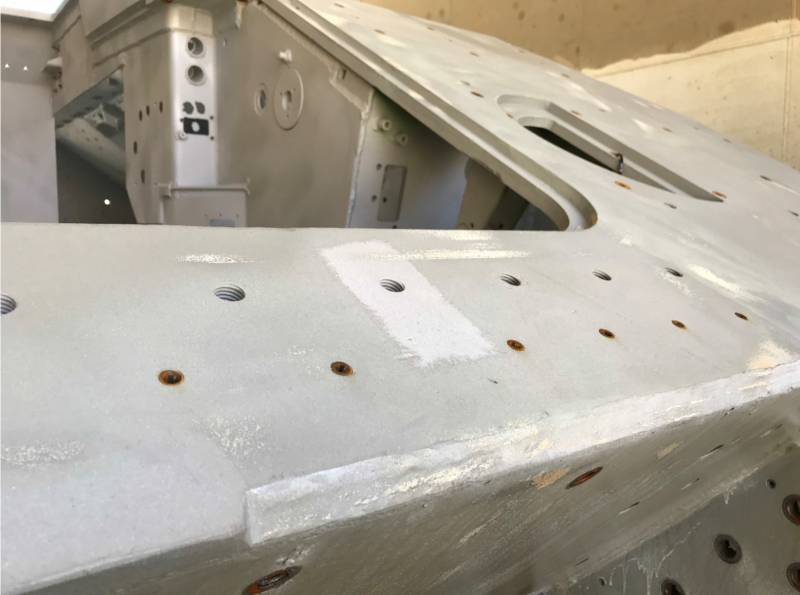 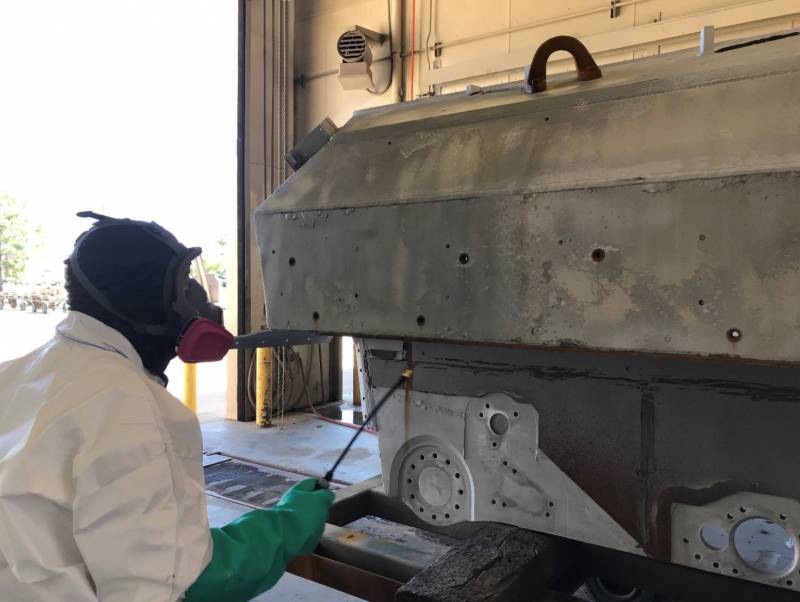 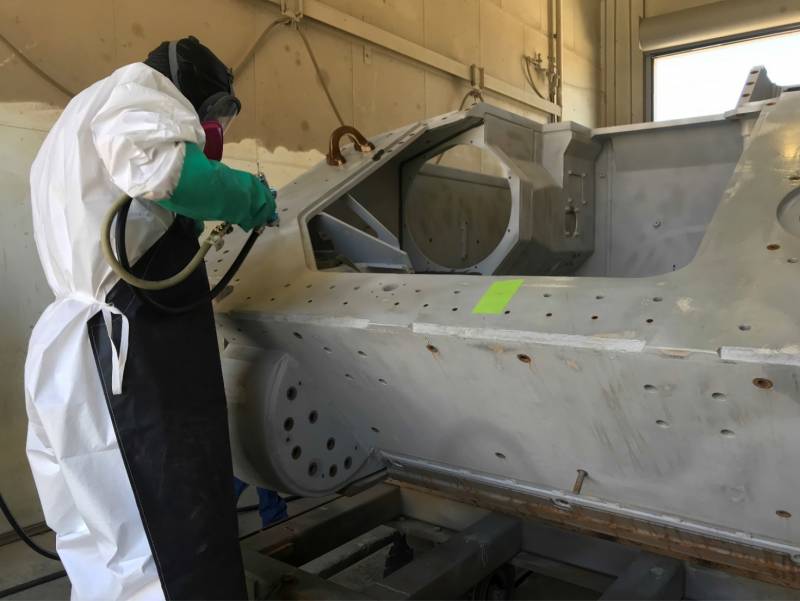 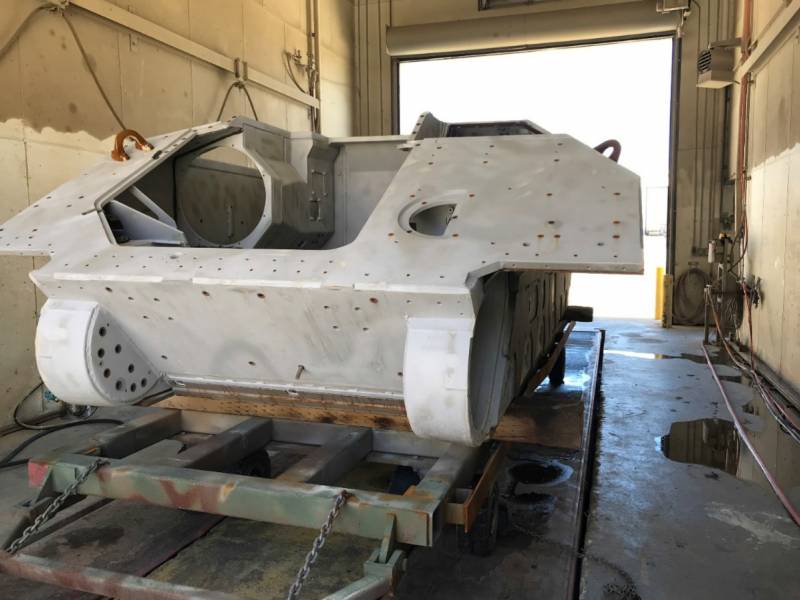 Bradley has aluminum armor. This machine is similar to the BMP-3. Source: vk.com
It is necessary to determine several basic points in stories with potential deliveries of M2 Bradley to Ukraine. First, infantry fighting vehicles will appear in the theater of operations not tomorrow or the day after tomorrow. At best, at the end of spring of the current year. The Americans need time both to train the crews and to create the necessary infrastructure - the cars need to be maintained and repaired somewhere. These are not self-propelled howitzers operating at a decent distance from the front, the M2 Bradley is supposed to be used in areas of front breakthrough, which will inevitably lead to losses. Disabled infantry fighting vehicles need to be repaired, that is, qualified mechanics and the necessary stock of components are needed. The option of delivering each M2 Bradley from the east of the country to Poland, as happens with the PzH 2000 and Krab self-propelled guns, is too expensive. The second point regarding American infantry fighting vehicles is that vehicles will be delivered to Ukraine not from the latest modifications, but from the availability at storage bases. About two thousand Bradleys in the M2A2 and M2A2 ODS versions accumulated overseas. Now the most modern version of the American BMP is the M2A4, which recently entered service with the US Army. There is a new more powerful engine, an improved transmission, increased ground clearance from 380 to 510 mm, and, most importantly, the Iron Fist Light Decoupled (IFLD) active protection system developed by the Israeli company Elbit Systems. The appearance of this version in Ukraine is extremely unlikely, since the Americans themselves have no more than two hundred such infantry fighting vehicles. Therefore, we will proceed from the option of supplying machines of the M2A2 and M2A2 ODS (Operation Desert Storm) series, as the most massive and relatively inexpensive. 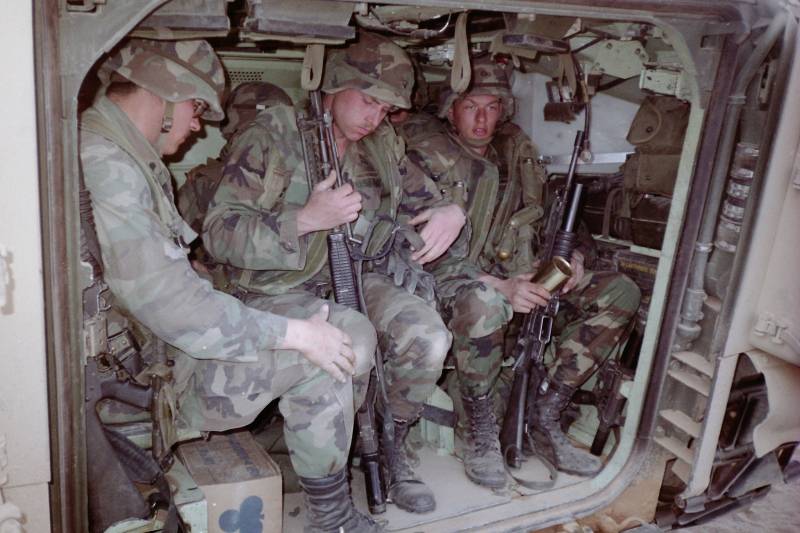 Landing in Bradley. Source: vk.com
Some experts consider the potential supply of Bradley to the Kyiv regime as the beginning of a new stage of Lend-Lease. BMPs will become a trial balloon or, if you like, the first signs before the appearance of the entire spectrum of NATO weapons. As soon as cars from the USA appear on the eastern front, they will revive in Germany. The Germans do not want to be the first in the supply of offensive weapons and, after the American launch, they may well send their Marders to Ukraine, and after some time - Leopard 2 tanks.

How much is an American infantry fighting vehicle worse or better than Russian? This is the first thought that comes to mind when you hear about the potential supply of Bradley to Ukraine. It is also necessary to place accents here. Firstly, direct fire contacts between infantry fighting vehicles at this stage of the special operation do not occur so often. This is due to the specifics of the positional confrontation, and the lack of infantry fighting vehicles among the nationalists. However, with the gradual saturation of the Ukrainian army with NATO infantry fighting vehicles, duels between vehicles of this type will be inevitable. Secondly, the BMP-1 and BMP-2 cannot compete with the Bradley in terms of security. The American machine was originally developed to deal specifically with Soviet armored vehicles, which led to its great firepower. The 25-mm M242 cannon hits the BMP-1 and -2 from almost any distance in any projection. Particularly dangerous are the M919 sub-caliber projectiles with a depleted uranium core, capable of penetrating more than 70 mm of homogeneous armor. At the same time, Bradley has a fairly serious reservation, for which they sacrificed the ability to swim without prior preparation. For reference, only cars from the very first M2 and M2A1 series could swim on a completely calm water surface. Subsequently, an increase in armored infantry fighting vehicles led to a critical increase in weight to 34 tons or more. The initial weight of the Bradley M2 did not exceed 22 tons.

But back to the domestic 30-mm armor-piercing shells of the 2A42 (BMP-2) and 2A72 (BMP-3) cannons, which are not capable of hitting Bradley in the forehead at a distance of 1500 meters. And there is nothing surprising in this - the American car appeared much later than the Soviet infantry fighting vehicles, which ensured a higher technical level of performance. With a high degree of probability, we can assume the appearance in Ukraine of vehicles with dynamic protection units BRAT (Bradley Reactive Armor Tile), which includes protective units mounted on the hull and turret. There are five sizes of dynamic protection blocks: for the forehead of the M3 hull weighing 13,48 kg each with 1,18 kg of explosives, M4 blocks are also mounted in the frontal part (weight - 2,68 kg with 0,27 kg of explosives), M5 is hung on the sides (weight - 33,46 kg with 2,68 kg of explosives), on the tower blocks M6 (weight - 13,7 kg with 1,32 kg of explosives) and blocks M7 (weight - 10,2 kg with 0,95 kg of explosives) . In total, 96 blocks are mounted on one Bradley, which significantly increases the resistance to cumulative weapons. 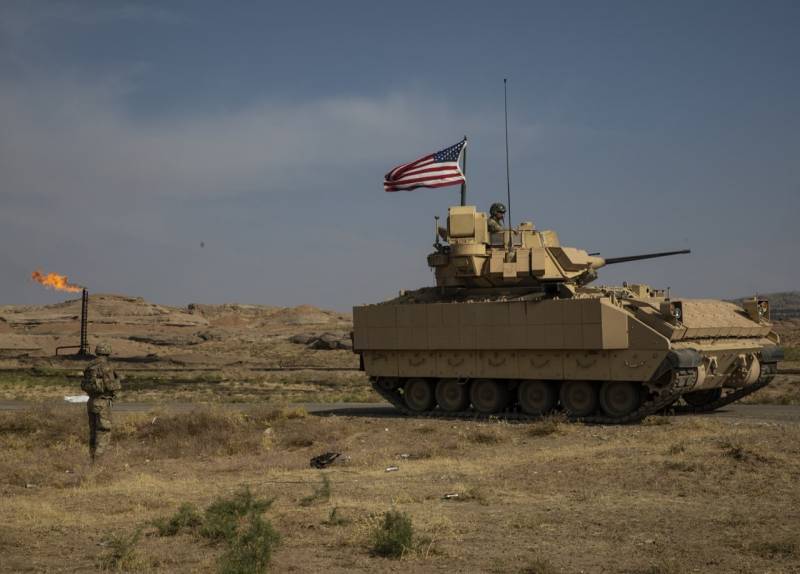 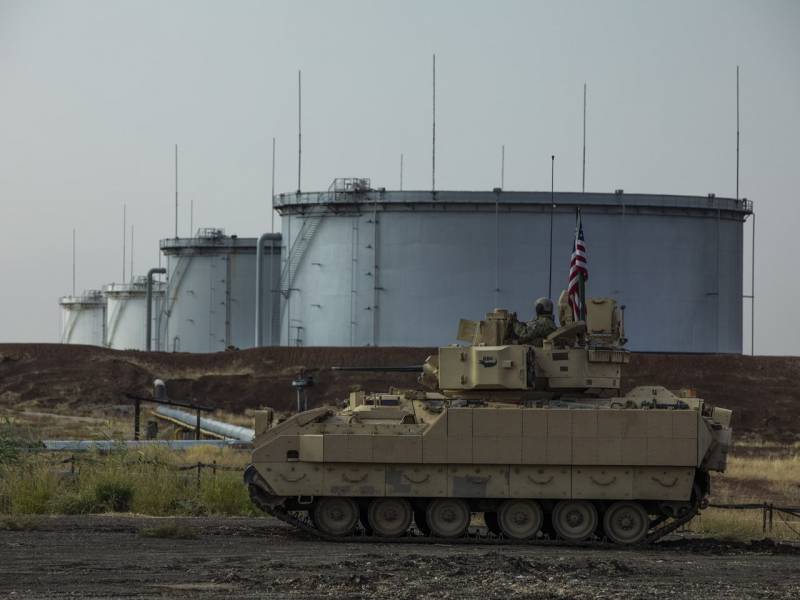 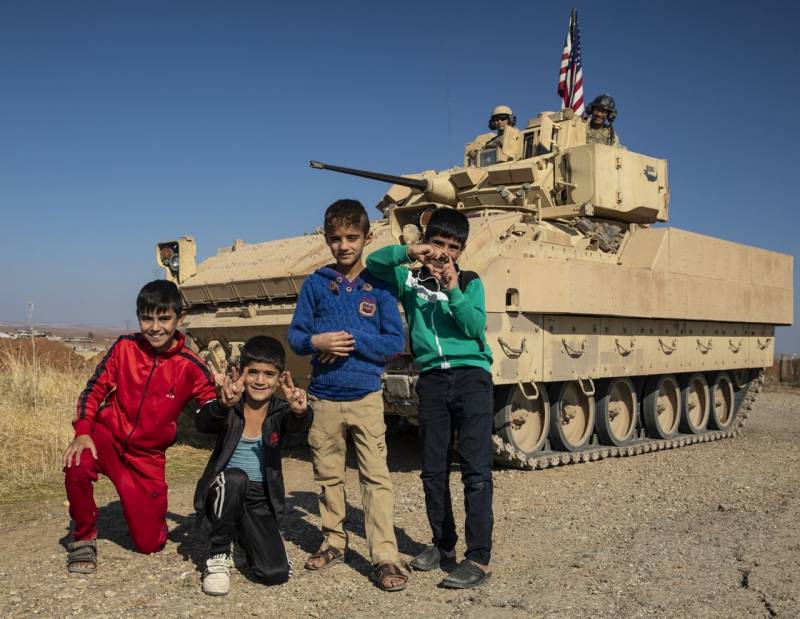 BMP Bradley М2А3 with BRAT (Bradley Reactive Armor Tile) complex in Syria. Source: vk.com
All of the above suggests that the most prepared enemy for Bradley is the domestic BMP-3, which appeared not much later than the American car. And here for the "American" is not good at all news. First of all, due to the unprecedented firepower for vehicles of this class. For example, the Bradley is designed exclusively as a tank fire support vehicle, as an independent combat unit, it is used only against a lightly armed enemy. A 100 mm 2A70 gun-launcher paired with a 30 mm 2A72 cannon provide the ability to "effective conduct of combat operations by motorized infantry units in the offensive and defense without the support of tanks and artillery". Perhaps Mark Kanchian should have referred to this car as a light tank, and not a Bradley. A 100 mm rifled gun is guaranteed to inflict fatal damage on an American infantry fighting vehicle in any design. Except for machines with an active protection system. The Russian cannon does not have the highest ballistics (the initial velocity of the projectile is 355 m / s), which allows the Israeli system to intercept it at the final stage of the flight.

By the way, once Bradley has already lost the BMP-3. We are talking about the UAE tender for the supply of infantry fighting vehicles, in which Russian equipment won. According to various sources, the Arabs now have up to 650 triples. For 2022, BMP-3 operators are at least 13 countries in which more than a thousand Russian vehicles serve. 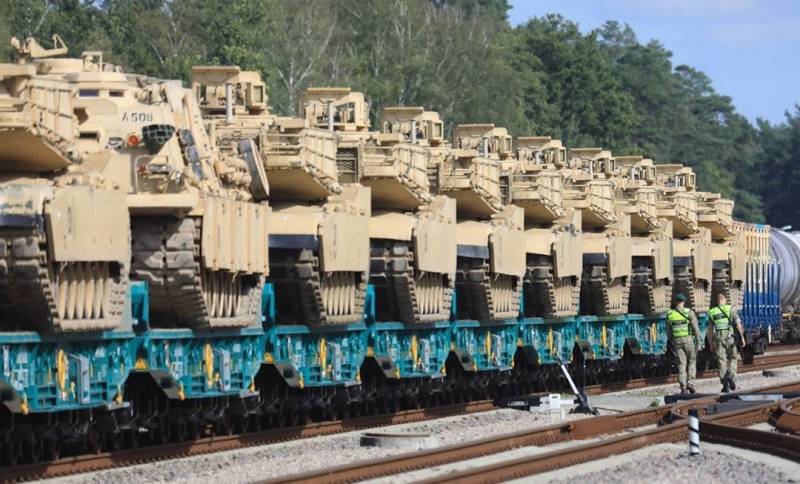 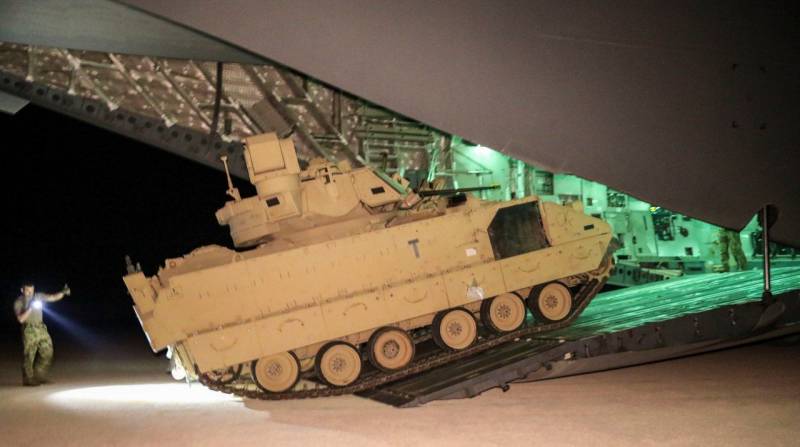 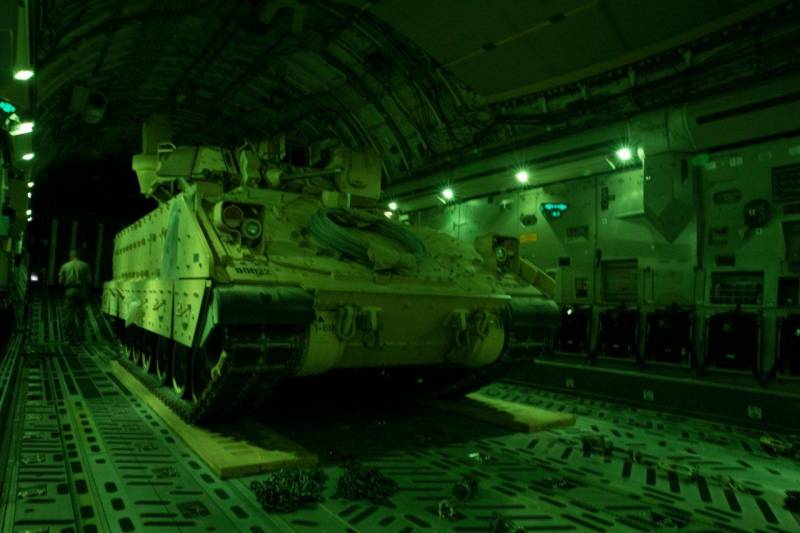 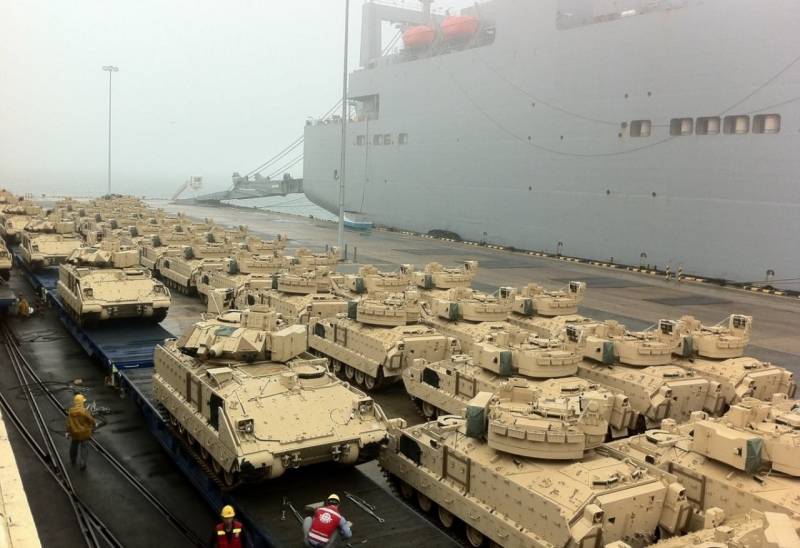 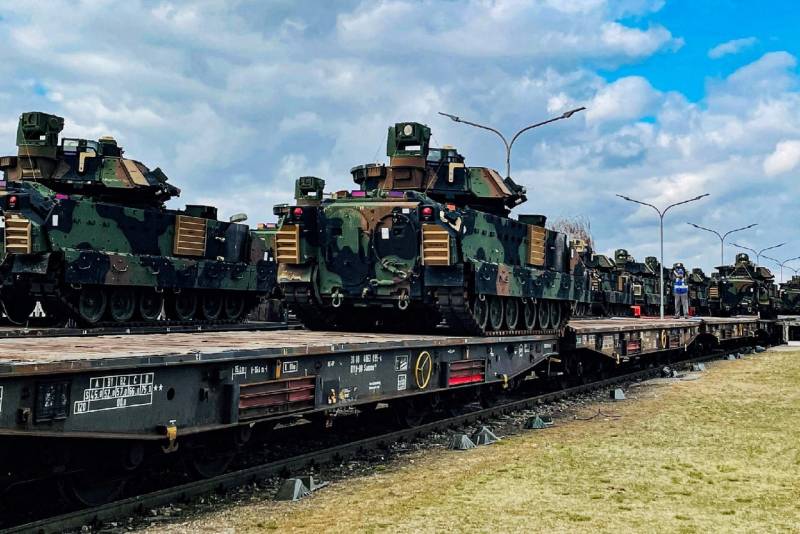 A lot of Bradleys have been transferred to Europe, some of them may end up in Ukraine. Source: vk.com
The most stable when meeting with Bradley will be the BMP-3M variant with reinforced spaced armor. But this technique is not so much in the Russian army. Unfortunately, unlike the Americans, neither industrialists nor the army could reach the mass equipping of infantry fighting vehicles with dynamic protection. Although there are projects implemented in metal - for example, the Cactus DZ. This equipment would come in very handy in the face of the threat of Bradley using standard TOW-2 ATGMs capable of penetrating tank armor, not to mention light armored vehicles. According to the Americans, it was Bradley anti-tank missiles that destroyed more tanks in Iraq than Abrams. The Russian BMP-3 also has the ability to hit the enemy with ATGMs, only through the barrel of a 100-mm gun-launcher - we are talking about missiles of the 9K116 "Kastet" series. 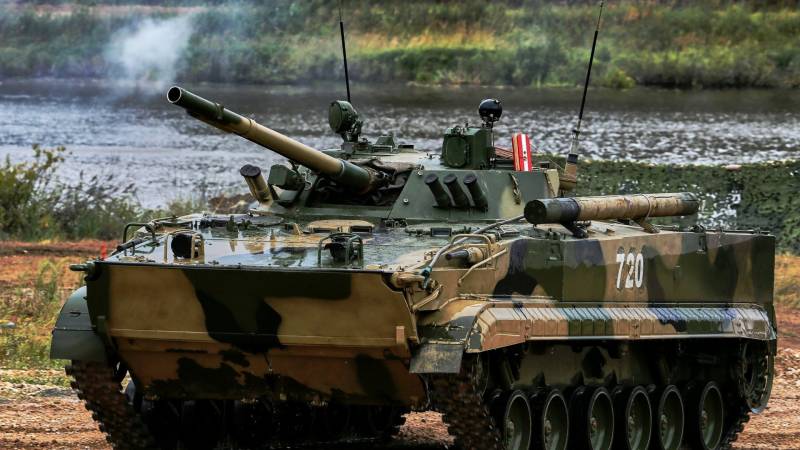 The main advantage of the BMP-3 over the Bradley is its firepower and mobility. Source: 7themes.su
Despite all of the above, the BMP-3, even in stock, is capable of withstanding a 25 mm Bradley cannon head-on. Difficulties can arise only when meeting a 25-mm uranium "scrap" M919. The main caliber of the domestic armored vehicle, on the contrary, will leave no chance for the American.

The Russian armored vehicle of the American competitor is also superior in mobility. The specific power of the BMP-3 is 26,7 liters. s. / t., Bradley - no more than 21,7 liters. s./t. As has been repeatedly stated, it is mobility that is one of the most important factors for survival on the Ukrainian front. Where the Bradley outperforms the BMP-3 is in the greater ease of operation of the fully automatic transmission. In a domestic car, the driver selects gears manually, although without a clutch pedal. And, of course, the Bradley is distinguished by a more ergonomic troop compartment due to the engine located in the front. Everything here is classic - a massive aft ramp, and the BMP-3 has a forced dismounting through hatches in the roof of the hull on top of the engine. However, combat experience suggests that neither American nor Russian vehicles are used to transport infantry in the original sense of the word.