Emergency at the Ministry of Defense 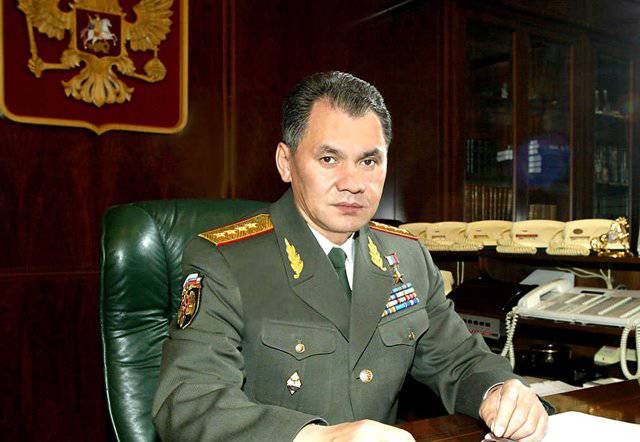 The Russian mass media have repeatedly raised the topic of the urgent resignation of Defense Minister Anatoly Serdyukov. At the same time, not only journalists, political scientists, but also retired and active military personnel, and many other citizens who are seriously concerned about the problems of the Russian army, gave their forecasts. Even when Serdyukov was the defense minister, the names of the people who could change the unpopular head of the defense department were called. Among such “candidates” were: Nikolay Makarov, Dmitry Rogozin, Vladimir Shamanov and a number of other worthy personalities. However, as a result, Nikolai Makarov is still the chief of the General Staff, although it is said that after the dismissal of Anatoly Serdyukov, his days in this post are numbered. Last December, Dmitry Rogozin became deputy prime minister in charge of the Russian defense industry. Vladimir Shamanov remains commander of the Airborne Forces.

The post of the Minister of Defense of the country, as is known, was taken by Sergei Shoigu. And here, as they say, no one guessed. President Putin made the appointment of Shoigu to the new post 6 in November 2012 of the year, relieving Anatoly Serdyukov of his ministerial position.

In order to get an idea of ​​the personality of the new Minister of Defense, it is worth touching on his biography and career.

Sergei Kuzhugetovich Shoigu was born in the Tuva ASSR 21 May 1955. His father, who at birth was called Shoigu (name) Kuzhuget (generic name), by the will of an error in the passport office, became Kuzhuget (name) Shoigu (last name). The father of the current Minister of Defense began his career as a journalist, and then his career entered the political plane. During his professional activities, Kuguget Shoigu was able to achieve a regional political Olympus as the first deputy head of the Council of Ministers of the Tuvinian Autonomous Soviet Socialist Republic.

Mother Sergei Shoigu - Alexandra Yakovlevna Kudryavtseva (in marriage - Shoigu) comes from Orlovschiny. She in the Tuva Autonomous Soviet Socialist Republic also occupied fairly high positions related to agriculture. Aleksandra Shoigu repeatedly became a deputy of the Supreme Council of Tuva, and also worked as the head of the planning department of the Ministry of Agriculture of the Tuva ASSR.

Shoigu Jr. studied mediocre, was a solid troechnik. He was a hooligan (he even got the nickname Shaitan), but thanks to his father’s high position, all pranks got away with him.
Lentapedia

After graduating from high school, Sergei Shoigu entered the Krasnoyarsk Polytechnic Institute and in 1977, he received a degree in construction engineering. There is no exact data on whether Sergei Kuzhugetovich studied at the military department, but by April 1993 he had the military rank of senior stock lieutenant.

After graduation was obtained, Sergei Shoigu worked in the building trusts of Siberia. As a result, in 11 years of work, he has gone from master to manager of one of these trusts. At the end of 80, the political career of the current Minister of Defense went uphill. In 1988, Shoigu becomes the second secretary of the Abakan city committee of the CPSU, and a year later he becomes an inspector of the Krasnoyarsk Regional Party Committee.

A year later, Sergei Shoigu finds himself in Moscow and proposes his candidacy for the post of head of the Committee on the Elimination of the Consequences of the Chernobyl Accident. His proposal was not supported, but Sergei Shoigu received the position of chairman of the State Committee for Architecture and Construction, which was fully consistent with the record in his diploma. However, apparently, Sergei Kuzhugetovich didn’t entice such work, and he finds himself in the prototype of the future Ministry of Emergency Situations - the Russian rescue corps, formed from rescue teams that at one time did hard work to eliminate the consequences of the terrible earthquake in Armenia.

A year later, the corps was transformed into a committee, and Sergei Shoigu became its leader. Emergency work in Ufa was one of the first manifestations of Shoigu's extraordinary thinking and coordination work, when a multi-ton pipe fragment at the local oil refinery, ready to fall from a height, could cause enormous damage to the enterprise and even lead to a serious earthquake. That operation served as an example of the clarity of the actions of the Committee’s staff, and was even listed in the Book of Records. This particular case of Shoigu’s first steps in an “emergency” field suggests that this person is able to solve tasks that are extremely complex in a short time.

In 1994, Sergei Shoigu becomes Minister of Emergency Situations, and he is given the rank of Major General. This fact in the biography of Sergei Kuzhugetovich from the public raises certain questions, because before Sergei Shoigu extraordinary assignment of titles took place only in connection with the flight of Yuri Gagarin into space. However, we must pay tribute to Sergei Shoigu. With his work at the Emergencies Ministry, he proved that the work that his employees do is often less than the level of risk in terms of space flight. At the same time, the work of Sergei Shoigu himself at his post did not cause any complaints from any of the leaders of the state.

The media wrote about Shoigu as the head of the Tuva diaspora in Moscow. It was noted that in the homeland his name is held in great respect: in the hometown of Chadane a street was named after him, a mountain peak appeared Sergei Shoigu, the state farm “Flame of Revolution” was solemnly renamed into the State Unitary Enterprise “Balgazyn” named after Sergei Shoigu. The outcome of elections in the republic depends on his word.
Lentapedia

In the political sense, Shoigu “survived” a truly impressive number of government leaders, just like these Governments themselves. Having started work in the Emergencies Ministry within the Cabinet of Ministers of Viktor Chernomyrdin, he worked in the Government of Sergei Kiriyenko, again Viktor Chernomyrdin, then Yevgeny Primakov, Sergei Stepashin, Vladimir Putin, Mikhail Kasyanov, Viktor Khristenko, Mikhail Fradkov, Viktor Zubkov and again Vladimir Putin.

After, let's say, a short break connected with the work as the governor of the Moscow region, Sergei Shoigu returned to the Government, which at the moment, as you know, is headed by Dmitry Medvedev.

Obviously, Shoigu gets the reins of government of the Russian army in not an easy time for her, but are there any easy times for our army? .. Sergei Shoigu himself, after hearing from the president’s words about the offer to take the post of defense minister, said that will try to justify the hopes placed on him.

Shoigu will have to solve the problems associated with the continuation of the modernization course, the provision of housing for servicemen, waiting for heaps of corruption scandals, which for the Ministry of Defense have become a negative talk of the town hall. The reform, at the initial stage of implementation of which Anatoly Serdyukov stood, clearly cannot be reversed, and therefore Sergei Shoigu will have to apply for his progress all his strength and knowledge, which he has accumulated during the years of work in various Cabinet mines.

Judging by his work at the Emergencies Ministry, Sergei Shoigu is set up to solve any tasks assigned to him, and he will not look like a black sheep in the Ministry.

Shoigu used to rely on a strong team, which means we should expect that in the near future a systematic personnel policy will be pursued in the Ministry to select those who are ready to go to the end to complete the tasks. At the same time, we must not forget that Sergei Shoigu is, excuse me, a “grandfather” in the Government, and is clearly not ready to dance here to someone's tune. He needs comrades, but he will not compromise with those who will stand in his way. This once again proves that Shoigu is a strong and extraordinary personality, and therefore not only the state of affairs in the Armed Forces, but also the degree of relations with his colleagues will depend on his attitude.

In this regard, it will be interesting to observe such a combination as Shoigu-Rogozin. After all, it is no secret that Rogozin was in the Government at the moment when it became clear that the Ministry of Defense was not coping with the plans for the State Defense Order, and, in fact, at the moment when one of the minuses of work in the Ministry Anatoly Serdyukov showed up. But today Serdyukov took the place of a more decisive Shoigu, and the whole question is, does he need some kind of external assistant in the form of a special deputy prime minister? Obviously, no changes will take place on this flank in the near future, but over time, the presence of the post of deputy prime minister for defense will depend on the zeal of both Dmitry Rogozin and Sergei Shoigu in their posts.

In general, there is more than enough work for the new minister, and therefore it is worthwhile to wish him success in improving the country's defense capability while relying on experienced and professional cadres.

Ctrl Enter
Noticed oshЫbku Highlight text and press. Ctrl + Enter
We are
The Ministry of Defense is starting to eliminate the Airborne Forces
Military Reviewin Yandex News
Military Reviewin Google News
149 comments
Information
Dear reader, to leave comments on the publication, you must sign in.