November 6, 2012
1
In the summer of 1956, an event occurred that very worried the Soviet leadership, as it revealed a rather serious gap in the country's air defense system. 2 July 1956 was the first American high-altitude reconnaissance aircraft Lockheed U-2 to be spotted in the airspace of the people's democracy countries, and on July 4 1956, the aircraft was spotted in the sky over the USSR. Subsequently, such flights were continued and American planes flew with impunity in the Soviet sky at an altitude of 20-21 km., Photographing strategic objects from the air, including Moscow. Before the 1960, the Soviet air defense system could not oppose anything to this aircraft. The only means of fighting U-2 at that time could be fighters equipped with liquid-propellant rocket boosters, which would allow them to reach an altitude of 20-22 km.

It is worth noting that by this time there was already quite a good start in the development of such aircraft. Back in September of the 1953 of the year, the Government raised the issue of building a fighter-interceptor with a rocket booster that could climb to an altitude of more than 20 km. The OKB-155 chief designer A.I. Mikoyan was chosen as the main developer. OKB-155 decided not to design a new aircraft from scratch, but to re-equip the already existing experimental E-2 fighter for these purposes. The new machine received the E-50 index, and its main difference from the E-2 was the power plant, which consisted of an L-C-155 and TRD RD-9Е.

The external difference between the E-50 and the E-2 was to lengthen the fuselage of the fighter due to the presence of 3-x tanks for the rocket engine, as well as to install a combustion chamber located above the tail section of the machine. Nitric acid was used as an oxidizer for a liquid-propellant rocket engine, and kerosene was used as a fuel. Hydrogen peroxide was used to drive the LRE turbopump assembly. At the root of the raised keel of the fighter housed turbopumps supplying fuel components to the LRE chamber, as well as control units. The rest of the wing, stabilizer, nose of the fuselage and the aircraft landing gear did not change, as they were already quite well mastered on the E-2 fighter. At the same time, the E-50 interceptor fighter was unique. Prior to this, in the USSR there was still no fighter with a power plant that was inside the fuselage.

Unlike its predecessor, special acid-resistant coatings and materials were widely used in the E-50 design. At the bottom of the fuselage of the first car was the ability to install 2-x 30-mm automatic guns HP-30. The power plant of the fighter included a RD-9E turbojet with a load of 3 800 kgf and a C-155 LPRE mounted above it with a load of 1 300 kgf. In this case, the nozzle sections of the two engines were located in the same plane. In the developed lower part of the keel there were control units, tanks with an oxidizing agent, turbopumps for supplying fuel components to the LRE combustion chamber. For an emergency discharge of rocket fuel components under the fuselage of the aircraft, 2 pipes passed through the skin.

The radio equipment of the machine included the state-recognized Barium-M equipment, RSIU-3М radio station, the MRP-48P radio receiver, and ARK-5 automatic radio-compass. To ensure the life of the pilot when flying at high altitude, the SI-918 spacesuit created in OKB-3 was used, equipped with a transparent pressure head-mask that most resembled a spherical aquarium in which a flat window was mounted.

In the 1956-1957, three experimental E-50 fighters were produced. The first of these was built fairly quickly and was prepared for flights already 1 November 1955 of the year. The first flight of the aircraft was performed by 9 on January 1956, the test pilot LII MAP VG Mukhin lifted it into the air. The first flight using LRE took place only in the summer of June 8. The flight duration during LRE operation with the maximum thrust using mode was no more than 3,1 minutes. At the same time, horizontal flight at an altitude of 20 km. did not exceed 4 minutes, taking into account the deceleration time after turning off the LRE. On the first prototype of a fighter, after making several flights, the cockpit canopy was altered. Due to excessive aerodynamic heating of the lamp, the glazing, which was made of materials existing at that time, could not cope with the actual loads. The new cockpit canopy received a metal lining in which, in addition to the windshield, round portholes were made on the sides.

In total, the fighter made 18 test flights, three of which included the LRE. 14 July 1957, the fighter who piloted Mukhin crashed. Before reaching the runway of all 700 meters, the plane touched the ground. As a result, the fighter received serious damage, and the pilot, by happy coincidence, got off with a slight fright and continued his testing activities. The second fighter, the E-50-2, was already tested by another test pilot of LII MAP, V.P. Vasin. The second car differed from the E-50-1 by installing a “knife” on the rear edge of the steering wheel, which increased the area of ​​the vertical tail and the shape of the tail part of the fuselage.

The third version of the fighter - the E-50-3 was built in 1957 year and was fighting. The aircraft was equipped with two guns HP-30 and sight ASP-5H. In addition, the fighter differed from its predecessors in the elongated nose of the fuselage and the increased capacity of the fuel tanks. Nose extension was performed to accommodate additional fuel and radio equipment. At the same time, the tail section in the area of ​​the LRE installation was also modernized, and the edges of the air inlet shell were also sharpened. The equipment and electrical equipment were substantially reworked, the fuel system was changed. To facilitate the work of the pilot at high altitudes, the aircraft was equipped with a high-altitude compensating suit BKK-3M, a set of oxygen equipment KKO-2M and a head-gear GSH-4 having electrical heating. In addition, the fighter was equipped with a set of high-altitude equipment for work at heights up to 25 000 meters. During tests of this vehicle, the pilot of the Air Force Scientific Research Institute N. A. Korovin was killed. In flight, an explosion occurred, the pilot ejected, but the mechanism of uncoupling the seat and the pilot did not work. Work on the project has been stopped.

Performance characteristics of the E-50: 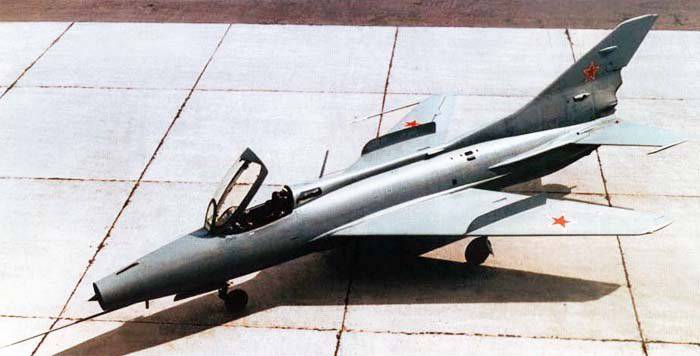 For further testing, work began on creating a new modification of the machine - E-50A. The new fighter was supposed to get a TR-P-11-300, and the fuel tank for the LRE on it moved under the fuselage. When creating it, the operating experience of the E-50 was taken into account, and the design was drastically modified. The experience was taken into account in which the maintenance of the LRE units located inside the fighter was accompanied by a large number of difficulties and seemed extremely dangerous. Significantly increase the operational reliability of the fighter could only be a different arrangement of elements.

The C-155 engine, its systems, the hydrogen peroxide tank, as on the E-50 fighter, were located inside the keel base, but the LRE control and power system was transferred to a special removable outboard container located under the fuselage. In addition, the set of control and power units was reduced due to the reduction in the number of tanks for fuel components, while maintaining its total volume. An ejector was mounted in the engine compartment for purging it, and a frame was added in the rear fuselage. The fuel supply system of the P-11-300 turbojet engine was kept the same as on the experimental E-2A fighter except for the abolition of two kerosene tanks (6 and 7). The horizontal tail, wing, lantern and chassis were completely identical to those of the E-2A. 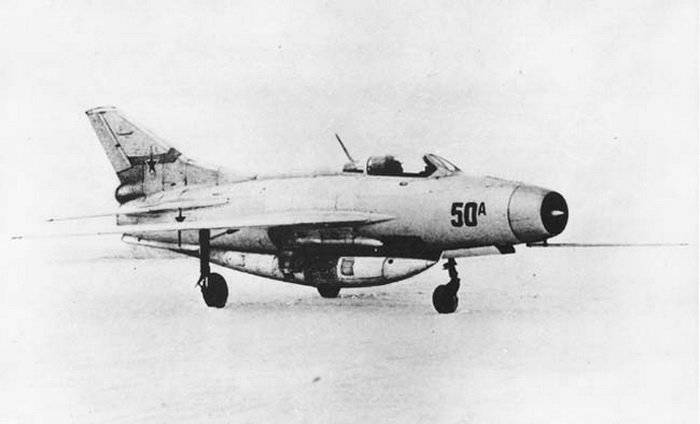 The armament of the E-50А fighter still included the 2-30-mm HP-30 gun (60 ammunition for ammunition on the barrel). In addition, it was planned to install 2-x eight-block units ORO-57K for launching 57-mm unguided rockets ARC-57 or ARC-57М. At the same time, the option of equipping the aircraft with guided missile weapons was being worked out. So, the E-50P version of the aircraft was proposed to equip the radar CSD-30, which was associated with the K-5M guided missile system, the ASP-51 sight, the Azure guidance system and the SOD-57M transponder. However, these plans did not come true.

For a long time, it was fighter-interceptors with a mixed propulsion system that were considered as the only real means of fighting the U-2 U.S. reconnaissance aircraft. However, the short operating time of the rocket engine at high altitudes and the shortcomings of targeting methods did not guarantee the defeat of the reconnaissance aircraft. Spending funds on the development of interceptor fighters, the use of which for their intended purpose was rather doubtful, was considered unreasonable. In 1958, all work on the design of the E-50A aircraft was stopped. At the same time, the USSR came to the conclusion that funding for military aviation, with the aim of promoting rocket technology. This concept as a whole bore fruit in the future, when on May 1, 1960, the U-2 reconnaissance aircraft was shot down near Sverdlovsk with the S-75 air defense system.

Tactical and technical characteristics of the E-50A: