November 6, 2012
13
F-26 STALMA - American fighter VI-generation. Developed by Stavati as a replacement for tactical F-16 Falcon. The name of the aircraft speaks for itself - STALMA (advanced lightweight multi-purpose fighter with a short take-off). It was planned that he will enter the program "DEM / VAL", which was held in 2004 year.

F-26 STALMA - integral triplane with one engine, controlled by one pilot. The sweep of the wing varies widely - 5-70 degrees. Provided great maneuverability and stealth for enemy air defenses. It has the same security and armament with the F-117 Nighthawk, but the cost of one plane is much less — roughly 25 million dollars. The beginning of the project development - 1994 year. The final draft was ready for 1997. The company hoped that after prototyping and flight testing in 2006, mass production would begin. The developers at one time said that the new aircraft will be delivered exclusively to American allies. 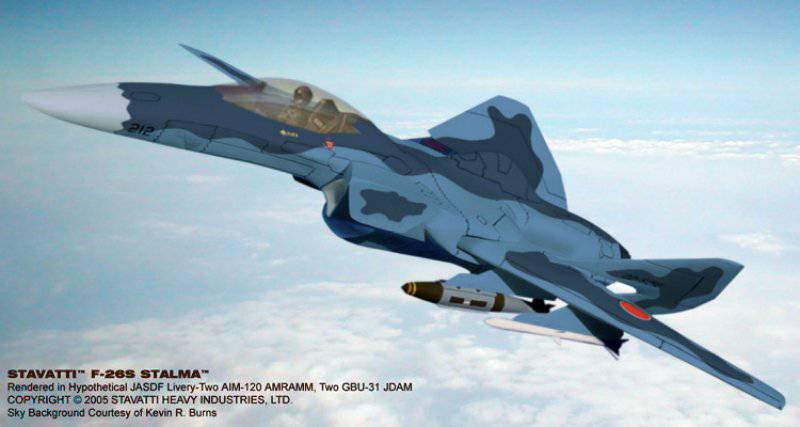 Device and design F-26
The aircraft is a mid-wing with a wing widely sweeping. Wing sweep is determined in flight automatically with the possibility of manual control. The wing has a slightly modified profile from NACA 66-415 and consists of titanium spirits and one spar of special alloys, ribs and stringers of titanium and its alloys. From above the wing is covered with titanium filler, the skin consists of graphite-epoxy composites. The inner part of the wing - fuel tank.

The edges of the wing are made of titanium and various composites. The front edge has slats, the rear edge has flaps of the Fowler type. The flaps and slats are controlled using hydraulic cylinders developed by Bertea / National.
Before a set of supersonic speeds, flight control is carried out using aileron. Spoilers mounted in the center of the wing provide lift control. Four suspension nodes are installed under the wing, allowing you to carry a kilogram of payload up to 7250. At full load, sweep is limited to 35 degrees.

The aircraft fuselage is made of 3 sections. The main structure is made of alloys and composites. V-type plumage with an angle of inclination 55 degrees. Cutouts for console from maximum sweep are provided in plumage. The plumage is used when typing supersonic, the lower end is motionless, and the upper one is fully turning, is controlled in three axes. The mobile part carries antennas and radiation warning equipment. The tail of the aircraft is attached to the farm, which holds the propulsion system.

The aircraft is mounted on a three-post hydraulic chassis. The chassis of the folding version - the front folds forward, the main - back. Landing speed no more than 7 m / s. To control the flow of air fighter has a 3 air intake. The ventral air intake is used at subsonic speeds, the side adjustable are used only on supersonic.

The cabin is designed for one pilot and completely sealed. For him set the seat with a catapult "Aces II". The oxygen supply is carried out using the “Litton” system; the AiResearch air conditioner is installed for thermal control. Cabin lamp integral, drop-shaped, opening / closing is carried out by an electric motor or manually. The cab has viewing angles vertically 13 degrees, horizontally 40 degrees. 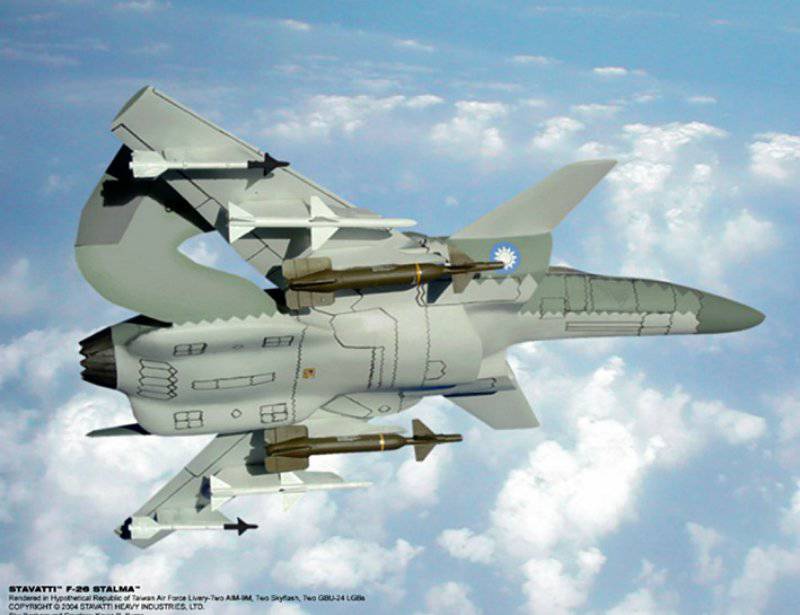 The control of the aircraft is quadruple, electrodistance from the installed console. In the left part of the collected control communications, weapons, defense and navigation systems, radar. In the right part of the collected control of the propulsion system, equipment control system, power systems, lighting, spare main systems and emergency system. The console center is responsible for flight control. In addition to the control devices, the 3 LCD monitors are installed. All monitors are interchangeable and display all available information on the situation, weapons, fuel reserves. On the right / left of the console, the 2 LCD display of the radar data output (front / rear hemisphere) is installed.

Hydraulic cylinders providing wing sweep change work from two independent hydraulic systems with a working pressure 275 atmospheres. In addition, the hydraulic system provides the chassis, air intakes, brake system. The pressure in the systems keeps the engine (in case of failure of the turbofan, there is a high probability of failure of flight control). To eliminate this, install pressure accumulators. The aircraft has an additional powerplant «Allied G250». It starts the engine and maintains the main systems with the engine off. Electrics are supplied from the generator “Sunstrand” with a power of 90kW (spare for 10kW). The power supply is on the main bus, it is duplicated by a spare tire (main systems only) engine start - a separate bus. DC current is output from the 28 B converter. Four 24V batteries are used to start the engine and power the central control console. On the starboard side of the fighter there are connectors for ground equipment and power supply.

The fighter has a radar station developed by Hughes AN / APG-73. Phased array antenna array. It is possible to install radar PS-05 / A or AN / APG 68ABR. The navigation equipment includes laser gyroscopes, built-in GPS, receiving equipment of various navigation systems. The equipment of protective systems includes an EW transmitter, secret communication equipment (voice) KY-58 TSEC, equipment of the “own-alien” AN / APX-109 responder, radiation warning equipment, AN / ALE-47 / 55 trap complexes. The DVR records the data and actions of the HUD with the MFD, as well as the data of the communication systems. In the black box, the last 1.5 hours are stored. As a payload, you can hang containers with additional equipment, such as guidance stations or navigation stations.

The fate of the project
This aircraft is a design work of a little-known American company “Stavati”, the photos presented are 3D-modeling. All those who were interested in clarifying the truth of the F-26 STALMA, argue that the company «Stavati» has no relation to the airlines that actually create combat aircraft. The project of a multi-purpose fighter had a goal to interest the European allies in the creation of a new improved fighter with a small cost. The company's website is present on the Internet, there are projects of various military and civil aircraft of original designs on it. The page with the F-26 STALMA no longer exists, although it was present on the site in 2000-2005. 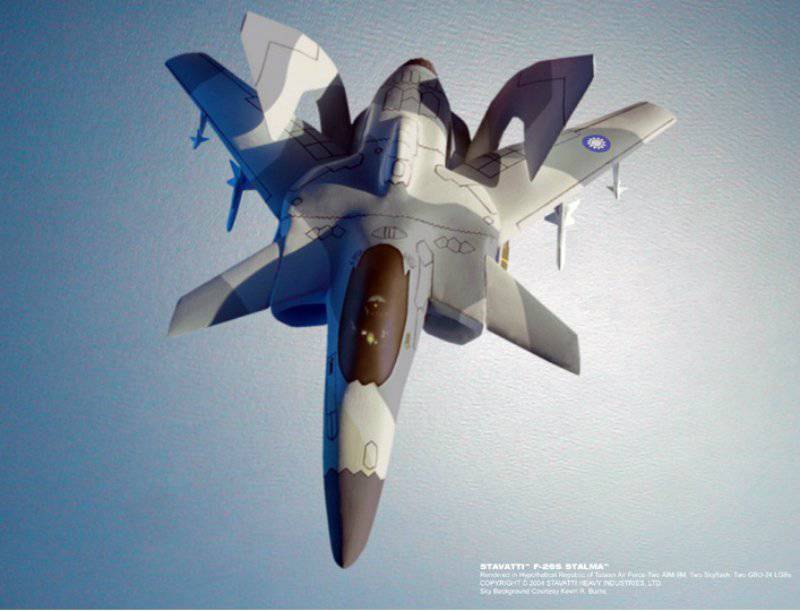 According to military experts, the cost of the F-26 STALMA, nor could it be declared by the designers, the production of necessary components, the establishment of production, would ultimately lead to a strong increase in the cost of cost.

And finally, although the design of the aircraft is quite original, the plane as a whole does not create a very pleasant impression, because, as they say, only beautiful planes can fly well.