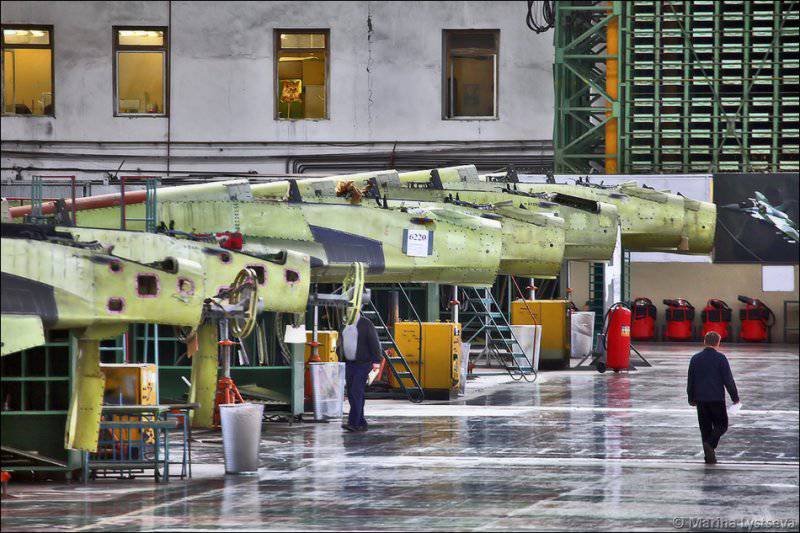 Production growth is carried out in the interests of foreign customers and the Ministry of Defense of Russia. This was confirmed during the on-site meeting of the State Duma Defense Committee in Lukhovitsy near Moscow.

In Soviet times, the production complex of the MiG corporation was designed to produce hundreds of fighters per year, but by the beginning of the 2000-s, the company had practically ceased to assemble new aircraft. Today the plant in Lukhovitsy is experiencing a rebirth associated with the development of new technologies and an increase in the production of aircraft. In the future, it should become the most modern aircraft factory of the full cycle in the European part of Russia. Some of the workshops are still filled with green lathes. But next door, through the wall, is a completely different picture: a clean shop, the latest digital robots processing parts of future aircraft. Young workers in branded overalls.

A large-scale upgrade of production on the MiG is associated with the creation of a new family of MiG-29K / KUB and MiG-29М / М2 fighters, as well as the promising 4 ++ fighter of the MiG-35 generation. All these machines are united by the fact that they are designed as a new platform, which has great potential for increasing combat capabilities for a long time based on the use of technologies inherent in fifth-generation aircraft. The new fighter aircraft looks like a classic MiG-29. However, these are absolutely new fighters with serious changes in the design of the fuselage, on-board equipment, as well as materials used in the production.

“Composites make up about 15% of the entire surface of the fuselage,” explains one of the company's employees, easily lifting an impressively large part of the fighter wing from the desktop. - It is two times lighter than aviation aluminum, five times steel. At the same time, it is an order of magnitude stronger. The use of composites has significantly reduced the dry weight of new machines.

Savings went on increasing the combat load and fuel reserve. If the classic MiG-29 could carry 2,5 tons of suspensions, then the ship's MiG-29K was 4,5 tons, and the promising MiG-35 could be more than 6 tons. The internal tanks of the MiGs hold almost one and a half times more fuel. In addition, the aircraft received an in-flight refueling system, which, in conjunction with the new air-to-ground missiles, makes it possible to accomplish tasks previously only available to bombers.

Internal changes of “MiG” are far more palpable. For example, the MiG-29K / KUB seriously changed wing mechanization, thanks to which the aircraft was able to take off with a shortened run-up and land at a lower landing speed. The fighter is fully implemented the principle of "glass cabin". Instead of analog devices - digital. All indications are displayed on color liquid crystal displays. Instead of control - electronic control system. In the west, it is also called fly-by-wire (flying by wire).

The onboard equipment of the aircraft has an open architecture that allows you to quickly increase the capabilities of the aircraft through the integration of new systems and weapons. It is a modern radar "Zhuk-ME", the latest electron-optical sight-sight systems. The survival rate in combat is significantly increased due to the introduction of elements of the stealth technology and the increasing capabilities of the onboard defense complex through the installation of missile launch detection systems and laser irradiation.

The RD-33MK engines are a significantly improved version of the RD-33, which were installed on the classic MiG-29. Thanks to the refinement of the motors, their power increased by 8%, the modern digital control system FADEC was introduced.

The MiG-29K / KUB / M / M2 aircraft have one more feature that makes them more attractive to customers. The classic MiG-29 was designed for 2500 flight hours and 20 years service life. New "MiGs" can serve without time limit, and the resource has grown to 6000 flight hours. Moreover, the cost of flight hours is reduced almost 2,5 times.

The MiG-29K / KUB successfully passed difficult exams at the aircraft carriers Admiral Kuznetsov and Vikramaditya, as well as at sea aviation India. RSK MiG is releasing them at a growing pace. In 2011, the corporation delivered 12 aircraft to the customer; in 2012, it is planned to produce 24 aircraft. And in the future, according to the CEO of the corporation Sergey Korotkov, the production rate is planned to be increased to 36 fighters per year.

“It seems to me that we are somewhat carried away by the fact that we put so many MiGs on overseas customers, it’s time to arm our own army,” Vladimir Komoedov, chairman of the Duma’s defense committee, complained jokingly after inspecting the production.

Sergey Korotkov noted that this wish is already being realized. The company has already begun production of the MiG-29К / КУБ for naval aviation of the Russian Navy, under a contract signed in March of the 2012 of the year. All technical problems associated with the development of the aircraft, have already been solved.

- We completed the second stage of testing on the ship. We have completed it completely. The state customer has signed a protocol that we have done this work and we no longer need the ship for further testing, ”stressed Sergey Korotkov.

The successes of the MiG-29К / KUB marine tests perfectly reflect the overall situation on the MiG, which in all respects goes to one of the leading positions in the industry. On the basis of the MiG-29K / KUB, airfield-based fighter jets were created and mass-produced: the single MiG-29М and the double MiG-29М2. The serial version of the latter in 2012 was successfully demonstrated in Kazakhstan, Serbia and Slovakia. At the celebration of the 100 anniversary of the Russian Air Force, the public saw the MiG-29М2 in a joint flight with the fifth-generation fighter of the PAK FA. In the future - the appearance of another new product - the MiG-35 fighter - a multipurpose Russian fighter of the 4 ++ generation.

The structure of its weapons includes the latest radar with an active phased array "Zhuk-AE". During test flights of the MiG-35 with the new on-board radar, all modes of its work on air and ground targets were tested both in the rear hemisphere and in melee combat. The radar discovered and led three air targets at ranges up to 148 km. That fully confirmed its compliance with modern - given tactical and technical requirements, including successful firing of an air-to-air missile. Confirming that the combat performance of the fighter brings it closer to the fifth generation models. According to Sergey Korotkov, the purchase of these vehicles has already been registered in the state armament program until 2020. And it will be delivered to the units from the 2014 year.

According to experts, in terms of their combat capabilities, the new MiGs are at least as good as modern foreign fighters of the 4 + and 4 ++ generation, which are mass-produced and are coming into service with the United States (F / A-18E / F) and Western European States ("Rafale", "Typhoon", "Gripen"). And in terms of the “efficiency / cost” ratio, the MiG-29К / KUB / M / М2 is one of the most promising proposals on the world market. Especially in the situation of the cessation of production "Mirage 2000" and the expected withdrawal from the market of the F-16 fighter aircraft, the Russian aircraft simply will not have Western competitors in the market niche of inexpensive light / middle-class fighters.

According to representatives of the corporation "MiG", to the MiG-29М / М2 there is a substantive interest from customers in the countries of the CIS and southern Europe. India, having received the 16 MiG-29K / KUB, ordered another 29 of such fighters. In the context of India, “MiG” fulfills the contract for the modernization of 63 Indian MiG-29 standard MiG-29UPG. Within its framework, the Zhuk-ME radar will be installed on the aircraft, which will extend the service life of the fighters by another 20 years. The corporation’s export orders portfolio now amounts to 4,4 billion on MiG, and there are good prospects for its further increase.

The modernization of production in Lukhovitsy suggests that the corporation intends to seriously fight not only for the external, but also for the internal customer. The success of the implementation of the program for the creation of the MiG-29K / KUB carrier-based fighter allows us to hope for the preservation of the Naval fleet the only aircraft carrier cruiser "Admiral Kuznetsov" and a significant increase in its combat potential. New carrier-based fighters make logical further plans for the creation of an aircraft carrier fleet in Russia. MiG-29M / M2 will allow to maintain the ground grouping of light fighters. And the appearance of the MiG-35 will closely bring it in combat capabilities to the 5th generation fighter.

Ctrl Enter
Noticed oshЫbku Highlight text and press. Ctrl + Enter
We are
New plants and workshops in Russia in 2015 yearKomsomolsk-on-Amur Aircraft Production Association
16 comments
Information
Dear reader, to leave comments on the publication, you must to register.