Pistols of China (Article I)

November 3, 2012
0
Weapon China has always aroused great interest, especially recently. So, if earlier, considering these or other samples, usually tried to find similarities with domestic or foreign models, in the end, China’s military industry has developed so much that now it can boast completely with its developments. However, if you dig, then with some samples you can still find similar features, but in general, the latest samples are completely independent. And on the background of the fact that lately one can notice a tendency to use ammunition, which are superior in characteristics, it is possible to say that China is going nostrils with Europe. However, everything is relative, and everyone can draw conclusions himself, based on the descriptions presented below. 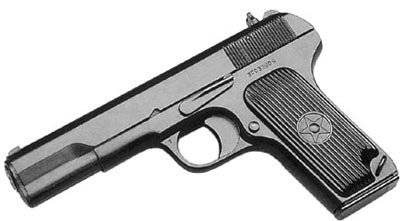 It all started with a TT pistol, or rather, with its Chinese version called Type 51. At the end of the forties of the twentieth century, the Soviet Union transferred to China the right to manufacture a TT pistol model 33 of the year. Taking into account the fact that at that time China’s military industry was developed at a zero level, no changes were introduced into the weapon design, and the Type 51 was completely similar to the Soviet TT. It was because of the lack of specialists that this pistol had all the disadvantages and positive qualities that the Soviet model possessed. I think that it is not worth describing weapons in detail, since this gun, even if it is another manufacturer, is familiar to anyone who is interested in firearms. It is also a copy in Africa, so we will go straight to the next sample of Type 54.

You will laugh, but the Type 54 is also a Chinese TT, but already modernized. Since by the year 1954 there was still no basis for creating one’s own weapons, as well as specialists for this, the Soviet Union did everything, so in this case the pistol is a complete copy of the Tokarev pistol, but of a later model. Thanks to the improvement of production it was possible to significantly reduce the complexity and cost, which is a definite plus. As in the TT, in the Type 54, the grooves on the shutter casing were replaced; in fact, this is the main distinguishing feature of Type 51 from Type 54. It is with this model of weapons, one can say, that the Chinese mass production began, which is now known to the whole world. Nashtamped oh-oh-oh how much. For each year of production it was planned to create about a million pistols, which is eloquently shown by the serial numbers of the weapon. Since the 54 edition of the guns had serial numbers from 1000000 to 1999999, the numbers in 55 already started with 2000000 and so on. Of course, this is not an indicator of how many weapons were actually produced, but I think everyone understands what a plan is and what happens when you do not fulfill it. It would seem, why do so many weapons to the Chinese, because it is unlikely that all this was done under the slogan "To each Chinese on the gun!". The secret of such a bulk production opened pretty quickly. Soon Chinese TT, already under the designation M.20, appeared in all hot spots of the planet. However, many noted that the Chinese sample is no match for the Soviet ancestor. The reason for the less love for this weapon in comparison with the original TT was hidden in a lower quality of metal, a lower quality of processing and so on, which as a result made the weapon less reliable and durable. So at that time TT remained the undisputed leader.

In 70, China made its way to the US market, which allowed them to advance in new territory. Initially, the supply of the Type 54 model was adjusted, but the weapon did not have a mechanical safety lock, and it also used not the most popular ammunition, because it did not find success. It was decided to carry out upgrades gradually. First, the Type 54-1 model appeared, in which the switch of the fuse blocking the trigger was placed on the frame on the left side, and then the “Model 213” appeared. This gun received minor changes to the frame of the weapon, the inclination of the notches was changed, and, most importantly, it used 9x19 cartridges. In addition, the set of weapons included a set of barrels and gates for 7,62x25 cartridges, as well as for .38 Super Automatic cartridges. Also a little later, the 201C model appeared, the production of which NORINCO took up; it differed from 213 only in that it had a magazine for 8 cartridges, as well as more ergonomic handle cheeks. We will not take profits from the gift of the USSR, but let's go further. 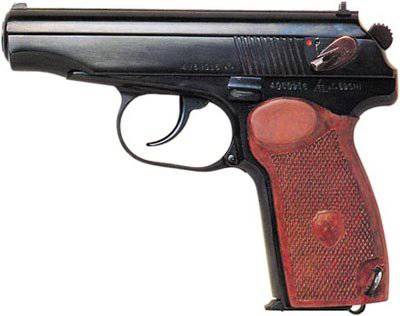 One of all the familiar pistols, which are produced in China, is the Type 59, not only the blind Makarov pistol can recognize the well-known pistol. And indeed, this weapon is a complete copy of the domestic PM, with the only difference that the Chinese save a little on metal during production, respectively, the weapon turns out to be slightly lighter and with less durability. This affects its durability, but here one must also take into account the quality of production, which, although not bad, is not above average. This gun feeds on the Chinese equivalent of the domestic 9x18 cartridge, which in China is also known as Type 59. This weapon was produced with the permission of the USSR, and not just copy a good pistol at will, so blame China for plagiarism in this case, the Type 59 pistol is a licensed Chinese copy of a Makarov pistol.

Both externally and internally, weapons differ little from their Soviet progenitor. On the left side of the weapon is located the switch fuse located on the left side of the casing-shutter, a little further is located control gate delay. The magazine is held in the weapon by a spring-loaded lock located below the handle of the weapon. Sights are open, unregulated, consist of a pillar and front sight. The principle of operation of the weapon is based on the free course of the shutter. The weight of the gun is 700 grams without ammunition. Actually, this is how briefly about all the well-known weapons on which China went “in free navigation” without the support of the USSR, so that the Soviet samples officially produced in China will no longer be in the article. 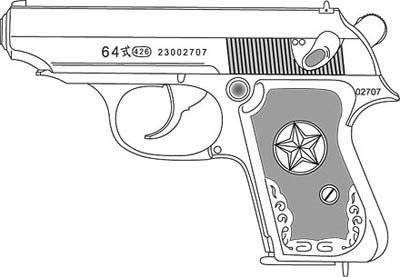 Left without the ideas of domestic designers, China was not taken aback. By that time, both the experience and the specialists for creating their own samples were already available, but still it all ended only with experimental models. But to produce already designed learned just perfect. Next in line was Walther PPK, who changed the name in China to Type 64-1. This gun was almost a complete copy of James Bond's weapon, the difference is only in the heel of the store. Type 64-1 entered service with the police, and also became the personal weapon of the senior officers of the People’s Liberation Army of China. The gun is powered by 7,65x17 cartridges and has quite normal characteristics, which are kept at the level of the original pistol. Separately, it should be mentioned that Type 64-1 was produced without obtaining any licenses. It was difficult to imagine how this issue was settled, but, most likely, they simply turned a blind eye to such tricks of the “Chinese dragon”, since the weapons were used only within the country, and it was impossible for European companies to break through to the domestic weapons market. Nevertheless, this gun can be safely called the most real "pirated" copy.

Further more. Realizing that no modern warfare could be won without reconnaissance and sabotage operations, it was decided to reconsider their views on the conduct of hostilities. Accordingly, there was a need for weapons that would be most suitable for new purposes. Thus, the first Chinese pistols with an integrated noiseless shooting device appeared. 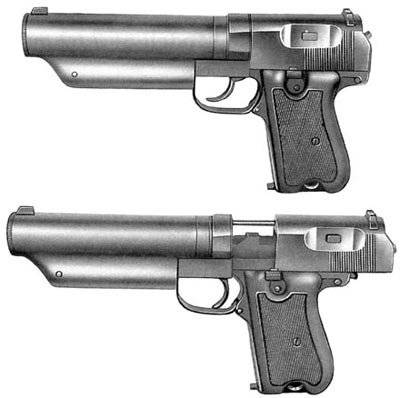 Type 64, namely the weapon was called this way, is the first fully Chinese pistol, well, and since the first pancake was lumpy, the designers with great overwhelmingness have nudged it. The most important feature of this noiseless pistol is that the barrel bore was locked when the bolt was turned. In this case, the gun itself was non-autonomous. If you briefly describe how it worked, you get something like the following. In order to make a shot, it was necessary to remove the cover-lock from the lock using the double-sided button located on the shutter casing, then pull it back to the stop and return to its normal position, but not forgetting to block it back using the button. It is inconvenient, unusual, but almost completely silent, which is important. But how effective it is difficult to judge, without encountering these weapons in person. The fact is that this gun is powered by 7,65x17 cartridges, but they are not exactly Browning, but are upgraded by Chinese designers. So the half-acrylic sleeve disappeared, and the bullet itself became heavier. In addition, the speed of the bullet is affected by the design of the device for silent shooting. And its construction is as follows. By itself, the silent shooting device is a large expansion chamber with two rubber membranes, which in itself speaks of the low lifetime of at least the membranes themselves. Powder gases, getting from the holes in the bottom of the barrel rifling into the chamber, expand, and then they are inhibited due to the turbulence, which they themselves form. After that they pass to the lower part of the device of silent firing, in which a metal grid is rolled to cool the powder gases and only after that they enter the atmosphere. It is possible that the construction was excessively abstruse, but on the whole it should have allowed the shot to be very, very quiet, but it did not. She summed up her method of attachment to the gun, which was an ordinary threaded connection, which was fixed by the safety bracket of the gun. In sum with the fact that the quality of production was not at the highest level, the sound of the shot was at the level of 80 decibels, and not bad martini ... But not martini ... The weight of the weapon was equal to 1,24 kilogram, while the gun length was 330 millimeters, with the length of the barrel 124 millimeter. The gun had a magazine with a capacity of 9 cartridges.

This concludes the first article about Chinese pistols, this is just the tip of the iceberg, more will be much more interesting, however, copies of famous models will also be found, but there will be quite a lot of Chinese samples.