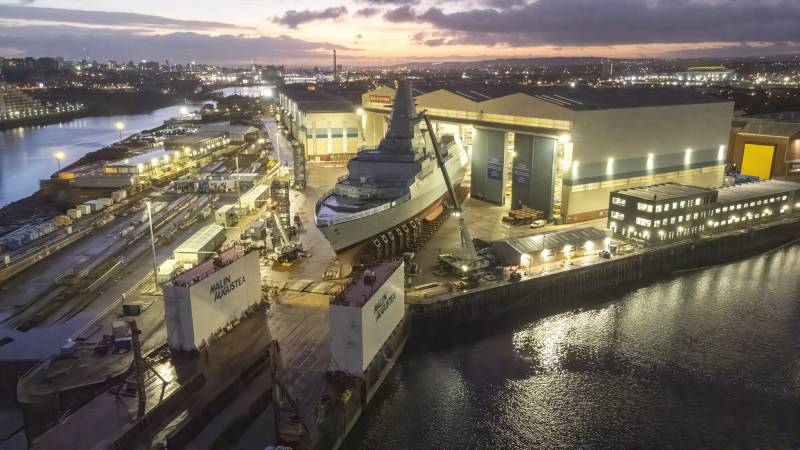 Transfer of HMS Glasgow to a submersible barge, November 25, 2022

A new series of Type 26 frigates is being built for the Royal Navy of Great Britain. The construction of the lead ship started several years ago, and only now it has been launched. Further work and testing of the finished frigate will take several more years, and it will be possible to take it into service only at the end of the decade. The next ships of the series will join the CVMF even later - during the thirties.

Currently, the UK Navy has 12 Type 23 frigates. The ships of this project have been built since the late eighties; the head one was handed over in 1990, and the last one - in 2002. The fleet received 16 pennants, but later 3 were sold to Chile, and one ship was written off in 2021 and is going to be disposed of.

Back in the late nineties, the CVMF began to study the possibility of creating a promising frigate capable of replacing the current Type 23 in the future. By the middle of the next decade, two concepts of such ships were presented that could enter service by the end of the tenth years. Then the plans were adjusted and changed, and with them the deadlines for the implementation of the future program were shifted.

In March 2010, the Department of Defense updated such plans and signed a contract with BAE Systems to develop a new frigate. The program as a whole was called the Global Combat Ship, and the project was assigned the Type 26 index. The ships of the new type were planned to be named after the major cities of the kingdom, which is why the project is also called the City-class. 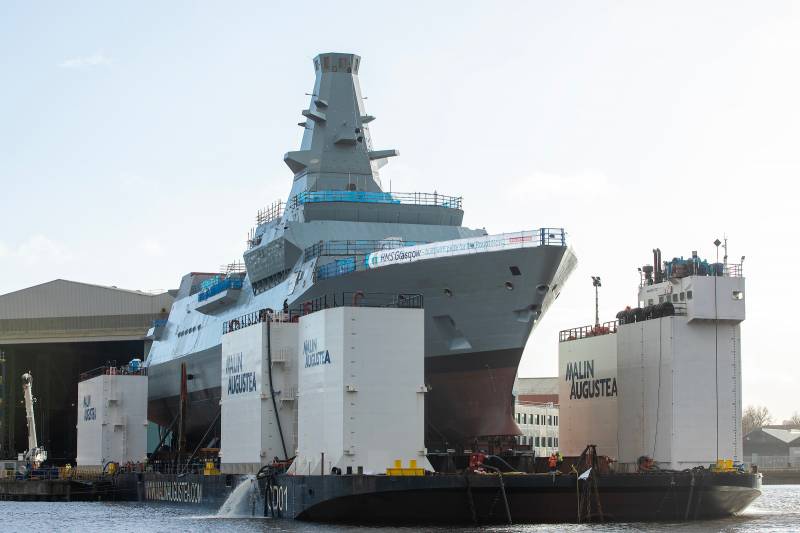 In 2014-15 BAE Systems has completed the formation of the appearance of the future frigate and has begun to develop a technical project. These works took more than two years and ended in success. In July 2017, the Ministry of Defense and BAE signed a contract for the construction of the first three ships of the series with a total value of 3,7 billion pounds. Metal cutting was planned to begin in the very near future, and before the end of the year, the laying of the lead ship was to take place.

In the early stages of the GCS program, the command planned to build 13 new ships - according to the number of Type 23 frigates to be replaced. However, in 2015 the budget was cut, and the Type 26 construction program was reduced to 8 hulls. At the same time, it was proposed to develop a simpler Type 31 ship to maintain the total number of pennants. Despite further difficulties, such plans remain in place, and the CVMF still wants to receive eight new frigates.

The GCS project was created taking into account the future entry into the international outlet, and such a calculation was generally justified. In 2018, a contract was signed for the construction of three frigates for the Australian Navy. A similar agreement is expected to be signed with Canada in the near future. At the same time, BAE Systems continues to search for customers and offers its project to new countries.

The order for the first three Type 26 frigates was issued on July 2, 2017. Already on July 20, the laying of the lead ship took place at BAE Systems Maritime - Naval Ships in Govan (Glasgow). The ship was given the name HMS Glasgow and tactical number F88. The next few years were allotted for further work. 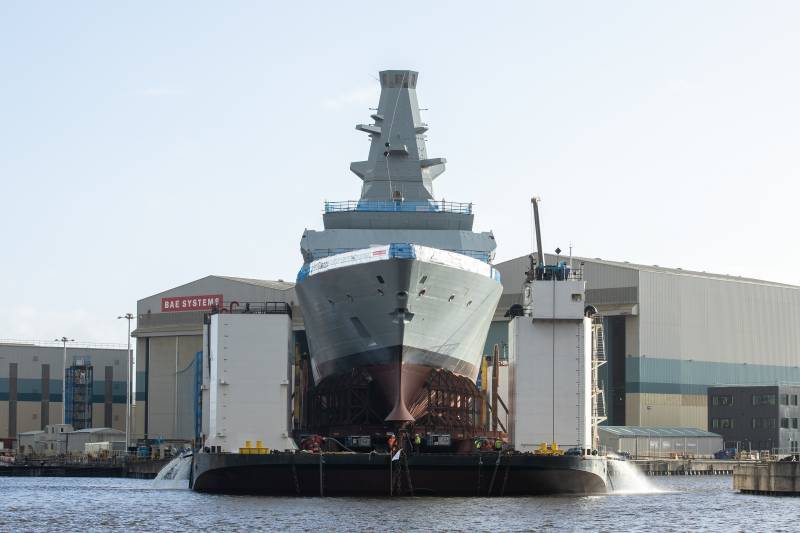 Since then, all hull and superstructure structures have been built in a closed workshop, and most of the internal equipment has been assembled, incl. propulsion system, general ship systems, etc. Not so long ago, the frigate was taken out of the workshop and external structures were mounted on an open area, incl. mast of a characteristic type. In recent months, the ship has been prepared for launching.

On November 25, the Glasgow frigate was transferred to a submersible barge. The barge was then towed down the River Clyde to Loch Long, which is deep enough. On December 3, the non-self-propelled vessel sank and allowed the ship to float. After that, the tugboats took the frigate to another BAE Systems site in Glasgow and put it to the mooring wall.

Now the ship must receive the remaining electronic systems, various weapons and devices. Completion afloat may take several years and will likely continue until the middle of this decade. HMS Glasgow will then go on sea trials. If they do not encounter unforeseen difficulties, then in 2028 the ship may be accepted into the composition fleet. Whether such plans will be fulfilled, only time will tell.

Under the 2017 contract, the contractor is to build two more frigates. The first of them, HMS Cardiff (F89), was laid down at the shipyard in Glasgow on August 14, 2019. At the moment, the ship remains in the workshop, and its construction continues. When the frigate will be ready for launching, it is not specified. Given the pace of work on the head pennant, it can be assumed that another two or three years will pass before the descent. 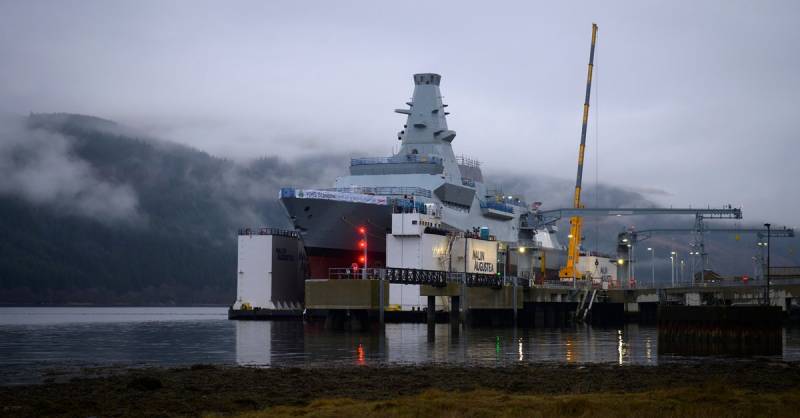 Launching process, December 3, 2022
On June 29, 2021, the laying ceremony of the third frigate HMS Belfast (F90) took place. Its construction is also in its early stages. Apparently, the formation of hull structures is still ongoing. Completion afloat can begin no earlier than the middle of the decade.

The head frigate Glasgow is going to be handed over to the customer in 2028, and the following ships will begin service even later. According to various estimates, "Cardiff" and "Belfast" will be able to pass through the tests and pass only in the early thirties.

Just a few weeks ago, on November 15, BAE Systems issued a second order for Type 26 frigates. It will build five ships with a total cost of 4,2 billion pounds. The names of the ships of this series have already been announced - Birmingham, Sheffield, Newcastle, Edinburgh and London. At the same time, the dates for the laying and completion of construction, as well as acceptance into the fleet, have not been named. It is likely that five ships will be handed over over the next decade, and this will complete the GCS program. 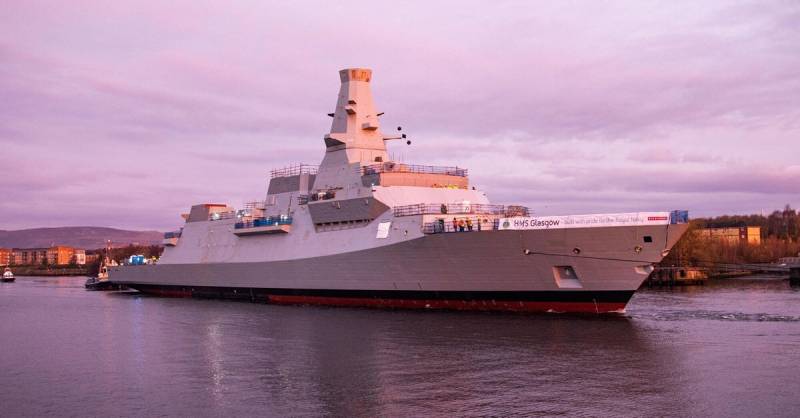 Frigate on the way to the outfitting embankment
The frigate has a characteristic "inconspicuous" exterior with a maximum of flat panels and a reduced number of protruding parts. The ship received a superstructure of great length and variable height, on which a mast pyramid with equipment is placed.

The basis of electronic weapons will be a three-coordinate Type 997 Artisan radar. It also provides for the installation of other locators to illuminate the situation, ensure firing, etc. Anti-submarine functions will be provided by the Type 2150 built-in hydroacoustic station and the towed Sonar 2087. It is planned to use various communication devices, incl. satellite, electronic warfare systems, etc.

The frigate will receive a set of barrel weapons. The main one is the Mk 45 installation with a 127 mm caliber gun and a 62 klb barrel. Two DS30M 30mm mounts and two 20mm Phalanx CIWS mounts will also be used. The crew will have several machine guns at their disposal. 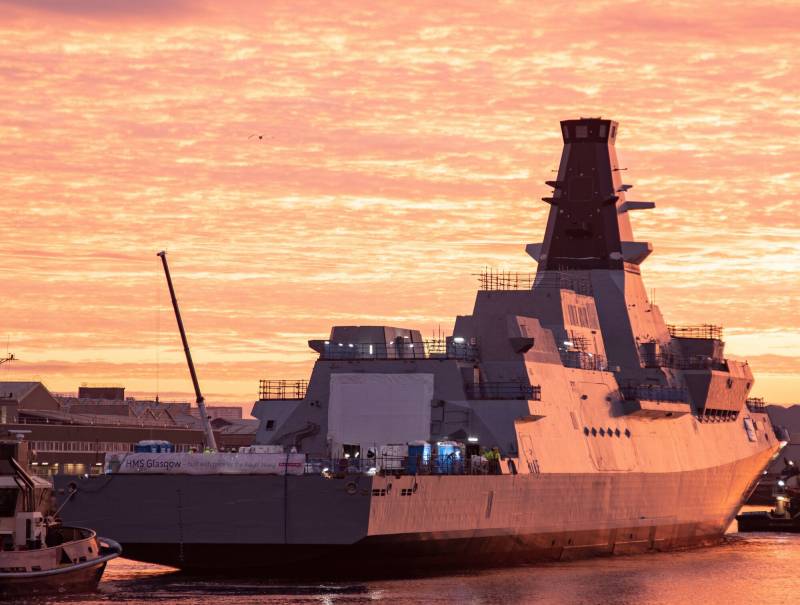 In the center of the superstructure is a universal launcher Mk 41 with 24 vertical cells. It will be able to use a wide range of existing missiles for various purposes. In addition, the promising Anglo-French anti-ship missile FC / ASW is expected to appear in 2028 or later. It is considered as the future main weapons "Type 26". The frigate also receives two vertical installations for Sea Ceptor anti-aircraft missiles, 24 cells each.

In the stern of the superstructure there is a hangar for receiving various helicopters. The frigate will be able to carry all current naval helicopters aviation KVMF and ensure their combat use. The dimensions of the landing area will allow even heavy helicopters, up to CH-47, to be received.

Ships of the future

Technically, the GCS / Type 26 / City-class project looks quite modern and has a certain reserve for the future. The ships of this project in the long term will be able to become a good replacement for the obsolete Type 23 frigates, and the difference in performance and capabilities will compensate for the smaller number of new pennants.

However, as it turned out, for modern Britain, the construction of even such ships is a very difficult task. The design of the "Type 26" was dealt with fairly quickly, but the pace of construction leaves much to be desired. More than five years have passed from the bookmark to the launch of the lead frigate, and the same amount remains before it is accepted into service. It is possible that in the series the construction time will be reduced, but even in this case, the KVMF will receive all the desired ships no earlier than in 12-15 years. Until that time, the fleet will have to operate obsolete ships with limited characteristics, which, moreover, will gradually have to be withdrawn from service.