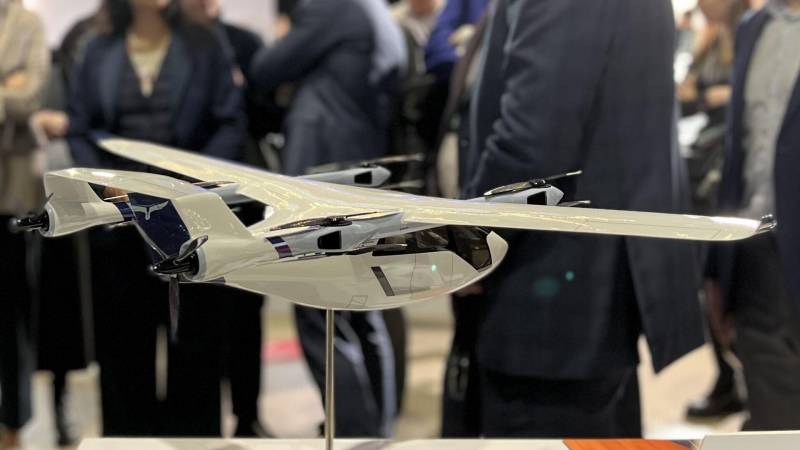 News, which is very difficult to ignore in the framework of this review - in Moscow at VDNKh in the pavilion "Cosmos" the exhibition "Aeronet 2035" is open. According to the official website, this is “the first exhibition and presentation of technological products and solutions in the field of unmanned aviation systems." In Russia, it turns out, there are a lot of companies involved in drones. In this exhibition alone, more than 130 developers will present more than XNUMX off-the-shelf solutions and technologies for aerial drones. 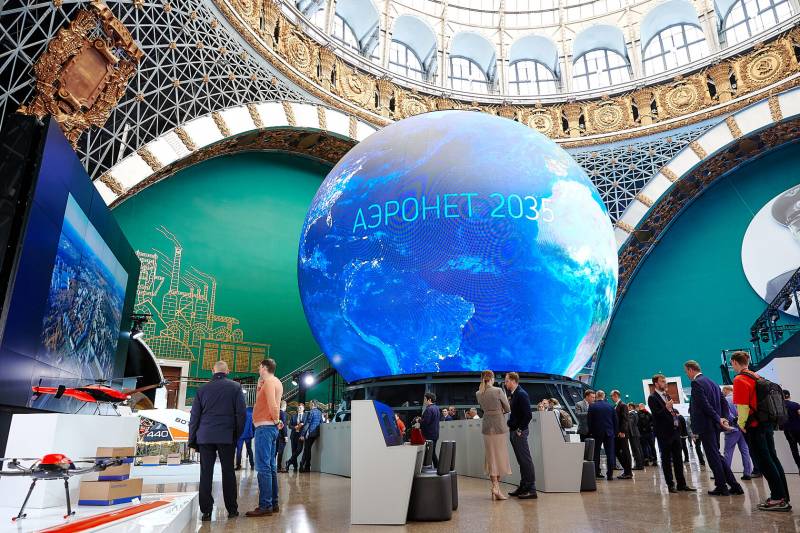 Source: aeronet2035.rf
Here is the helicopter VT 45, lifting up to 10 kg of cargo; and a ST D-20 aircraft-type drone capable of taking off and landing vertically; and the very first civil drone-helicopter BVS VT 440 in Russia, officially approved for operation in the country. The last car takes up to 100 kg of cargo into the sky with a delivery radius of 300 km. From the new products on the official website of the exhibition ripples in the eyes.

And what will happen when the layman is at the event offline? Here it is - the long-awaited equipment of the Russian army, its heavenly eyes and deliverers of "gifts" to the enemy's trenches.

Only now our fighters do not see this magnificence. There is hope for the six-bladed Supercam X4 drone, which is the only one of those presented at the exhibition that is mass-produced. The car was also presented at Army 2022, but so far there is no evidence of the presence of drones in Ukraine. Maybe because the share of Russian components does not exceed 70 percent. This is a very good result. 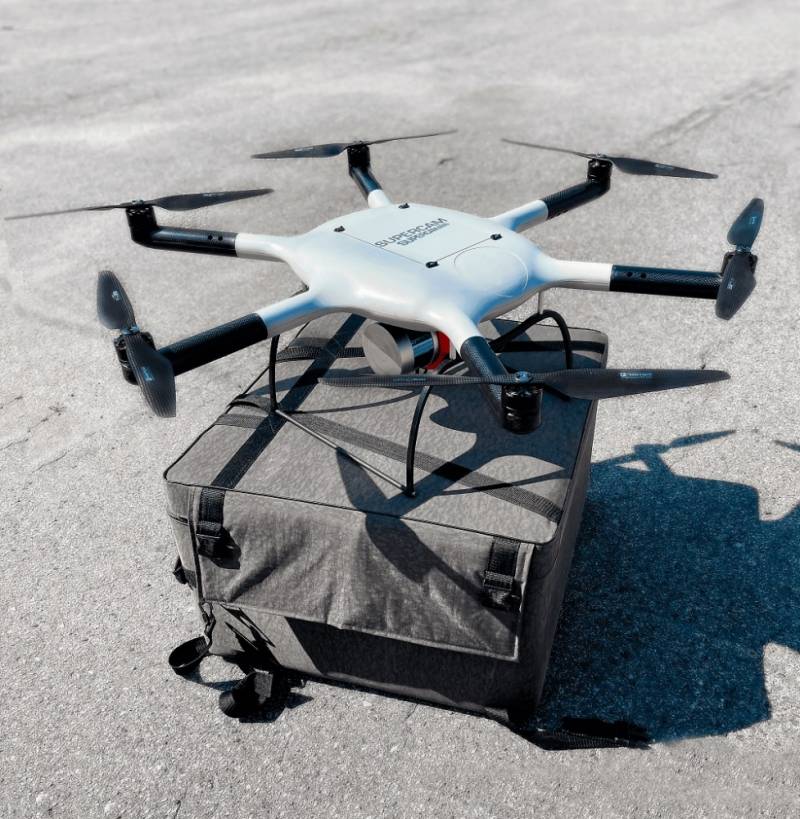 70% domestic Supercam X4. Source: mobilelegends.net
According to the Ministry of Industry and Trade, by the end of 2022, the level of localization of drones is approximately 40 percent. In particular, Russian manufacturers independently manufacture "electric motors, the production of payloads is being established, including with optical and thermal imaging sensors of domestic production, domestic composites and resins are used, and electronic devices are localized."

A couple of years ago, they didn’t know how to do this either - the share of imports reached 90%. But by 2024, Russian manufacturers expect to achieve 70% localization. 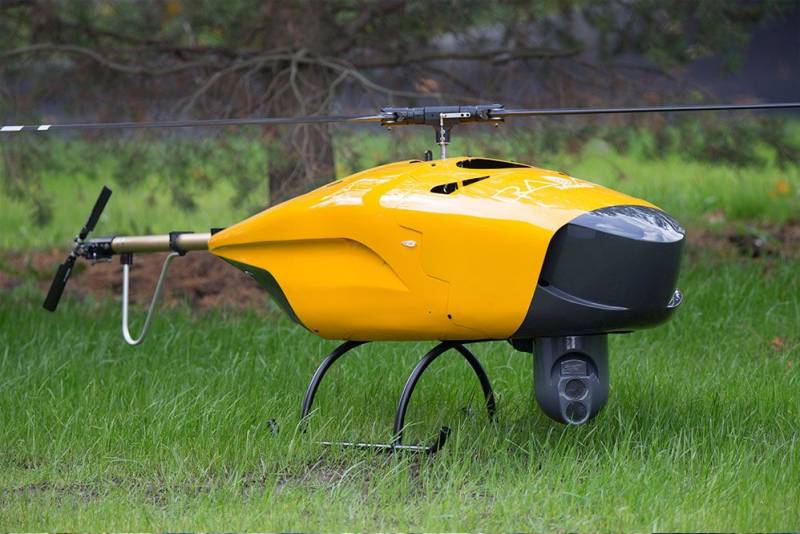 Small-scale BVS VT 45. Source: radar-mms.com
By the way, the only primordially Russian drone at the Aeronet 2035 exhibition is called the Cyclocar air taxi, which still exists in the form of a mock-up. Otherwise, everything is fine with drones in Russia, they are exploring new areas of application, expanding their functionality and becoming more and more independent. But this is all spinning anywhere, but not on the fronts of a special operation, although all these 130 developers should have simply filled up the fighters with drones. On paper, everything is very good - in the nomenclature of Russian commercial and government developers of unmanned aircraft, there are more than a hundred different types of products!

The unambiguous name of the event "Aeronet 2035" very accurately illustrates the level of backwardness of the domestic industry. If you believe the comments of officials, then 2035 is called a watershed, after which a lot of UAVs will appear in the sky, which do not need a person either in the air or on the ground. It remains quite a bit before the new glorious world.

Enough about the sad, let's look at the main conceptual novelty of the forum - the first Russian vertical takeoff and landing aircraft "Ecolibri".

A lot of things in the Russian industry are connected with electrification now. Unfortunately, there are not many projects tailored for domestic components. The project of the first vertical takeoff and landing aircraft in Russia "Ecolibri" is just one of this number.

The main idea of ​​the developers is clear from the name - to create an environmentally friendly aircraft. The Ecolibri flight range is planned to be about 1 km with an average speed of 200 km/h. The design hints at the possibility of transporting two or three people, or 270-300 kg of payload. There is no exact data on the power plant of the car, it is only known that they are planning a hybrid version. Energy-consuming take-off in all modes (with a small run-up or vertically) will be electric.

Horizontal flight is assumed due to two gas turbine engines with pusher propellers. Eight propellers are responsible for takeoff and landing, located four on two longitudinal beams. The outwardly laconic appearance of the Ecolibri is devoid of complex components, like a helicopter main rotor skew mechanism.

Model "Ecolibri". Source: ixbt.com
Alexei Rogozin, chairman of the scientific and technical council of the Ecolibri developer company, comments at the presentation of the model of the future drone:

“The VTOL aircraft will receive modern Russian avionics and will be made mainly on components produced in Russia. As a result, it will be more cost effective than helicopters in some applications. This is especially true for long routes, since due to the large area of ​​the wing, high aerodynamic characteristics can be ensured.”
He also publishes a vision of the military use of such products in his telegram channel. The hypothetical "Ecolibri-V" can be used as a repeater of control signals for strike and reconnaissance drones, a high-altitude reconnaissance aircraft, and even a hunter for enemy drones.

In hover mode, the thermal signature at high altitudes will tend to zero - only the radar will be able to detect the drone. Several hundred kilograms of payload can significantly expand the functionality of the machine.

Marching gas turbine engines that are not used for takeoff do not need to be built too powerful, which means they will be quiet enough. At low altitudes, this will allow the front lines to pass unnoticed and deliver everything necessary to blocked units. A sort of combat shuttle, not Ecolibri.

And of course, a hybrid drone is great for the most dangerous missions - delivering several hundred kilograms of bombs, missiles and other “cast iron” to the enemy.

So far, this idea is more theoretical than practically realizable. Even at the Aeronet 2035 exhibition, only a drone model was presented. But there are still certain hopes for implementation. They are connected with the construction of a plant for the production of lithium-ion cells and batteries for cars on the territory of the Baltic NPP in the Kaliningrad region.

The main designer of the enterprise is the Rosatom Corporation. There is no fundamental difference (except for weight and size restrictions) between an aircraft and a car lithium battery, so there is every reason to believe that the future Ecolibri will be equipped with a domestic product. 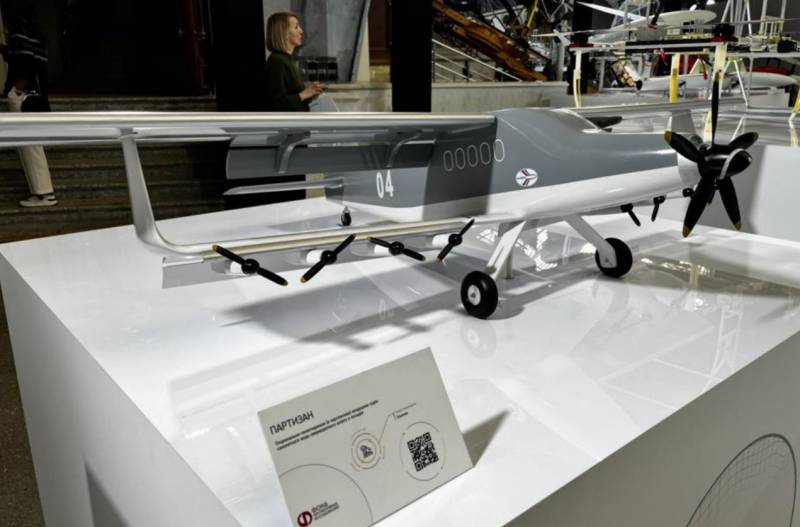 Project "Partizan". Source: ixbt.com
The Kaliningrad plant of Rosatom will provide the aviation industry with batteries not only for the project of an unmanned vertical takeoff and landing aircraft, but also for more prosaic vehicles. An illustrative example is the Partizan technology demonstrator aircraft, which should be able to take off from a platform of 50 by 50 meters. Approximately the same amount is needed for a Mi-8 class helicopter to take off into the air from a run.

The machine has been developed since September 2019 on the basis of the TVS-2MS Baikal aircraft. For the uninitiated, this is a modern interpretation of the well-deserved An-2 "corner", which is planned for production no earlier than 2024.

The main feature of the future "Partizan" should be the technology of active blowing by a distributed propeller group of the lower wing plane. Simply put, eight electric motors from the propeller will provide the lift required for a short takeoff.

The prototype of the Partizan was supposed to appear at the end of this year, but the lack of foreign components shifted the deadline to the right to 2023. In what quarter of next year the car will appear, the developer did not specify. There is no clarity with the timing of the construction of at least a technology demonstrator of the Ecolibri project.

It seems that the permanent shift of time to the right is becoming a habitual trend in modern technological Russia.