Strategic Missile Forces. 63 years on guard of the world 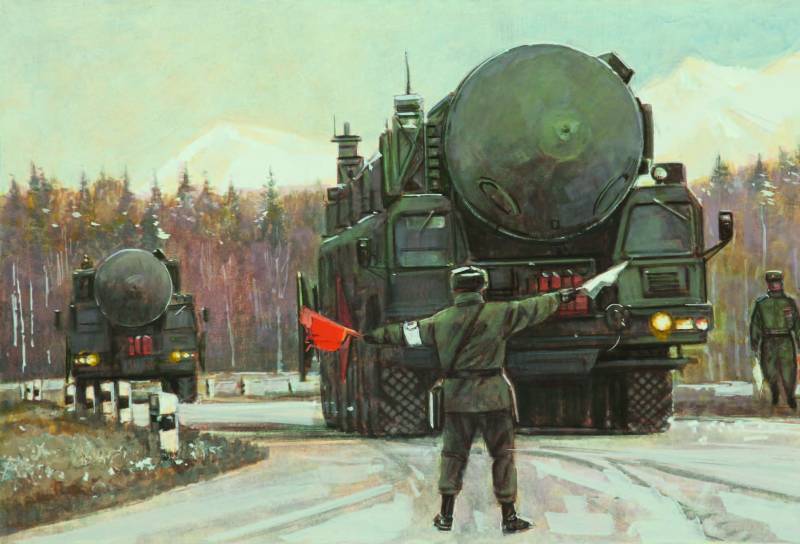 And ... rushed. Skip adolescence. Everyone knows everything.

By the beginning of 1983, the teenager had grown into a strong man - Ilya Muromets: the Strategic Missile Forces - this is 1 ICBM launchers and 398 warheads with a total capacity of 6 Mt. And then the Americans, not immediately, of course - it took some time to realize, a "window of vulnerability" opened. And the barrel, apparently, from this window is not weak.

The program for the rearmament of strategic forces, announced by the administration of President Ronald Reagan on October 2, 1981, regarding ICBMs, provided for the deployment of two hundred MX LGM-118A missiles to replace all fleet "Minutemen".

Moreover, at the first stage in a smaller quantity (100 units) than it was planned by the previous administration of Jimmy Carter. However, already at the beginning of 1983, a fundamentally new addition was made to it. Reagan accepted the recommendation of the report of the Strategic Forces Commission, headed by retired Lieutenant General Scowcroft, presented to him on April 6, 1983, to create another type of mobile ICBM, called the Midgetman. General Scowcroft's commission proposed deploying 1 mobile small ICBMs and 000 heavy MXs, all in a mobile variant like the Russians.

By the end of 1986, a contract was signed with Martin Marietta. Permission was granted for the full scale development of the XMGM-134A Midgetman.

The first test launch of the rocket (emergency) took place in 1989. The missile deviated from the set course and was eliminated at the 70th second of the flight.

The first successful test flight took place on April 18, 1991. The missile launched from the Vandenberg Air Force Base in California and after 30 minutes of flight, having covered 7 kilometers, hit a mock target at the Kwajalein training ground in the Pacific Ocean. In total, it was planned to conduct 300 test launches, but already in September 16 the program was closed.

XMGM-134A was a small-sized three-stage solid-propellant rocket with a length of 14 meters, a diameter of 1,17 meters. Starting weight - 13 kilograms. Like the LGM-600 Peacekeeper, the missile uses a cold launch system (mortar launch), copied from similar systems of Soviet 118th generation ICBMs. Midgetman had a maximum range of about 4 kilometers (11 mi).

Two warheads were developed for the missile: a W87-1 / Mk 21 warhead with a capacity of 475 kilotons and a penetrating warhead based on the W61 physical package with a capacity of 340 kilotons. In 1991, funding for the Midgetman R&D program was terminated, and, of course, there was a break in the work related to it, and part of the cooperation fell apart. The main factor in the decision to suspend the development of the Midgetman PGRK was the military-political factor - the completion of the process of preparing the Treaty between the USSR and the USA on the reduction and limitation of strategic offensive arms (START-1 Treaty).

Due to the technological features of this warhead, irreversible design changes have been made to the platform of the breeding unit. Now the missiles that have gone through this program are only capable of carrying one W-87/Mk-21 warhead. In 1978-1982, out of 550 Minuteman IIIs deployed, 300 were replaced with new, more powerful W-62/Mk-12A warheads.

If in the previous configuration the throw weight of the Minuteman was 1 kilograms, now it is 200. That is, the American ICBM forces, unlike SLBMs, have zero “return potential”. In one launch, they can lift 465 warheads, and this is the maximum.

The American silo LF-30G ICBM "Minuteman-3" has a degree of protection against the shock wave of a nuclear explosion of up to 1 psi. inch PSI (000 kg / sq. cm). Since December 70, 1986 LGM-3 Peacekeeper (MX) missiles have been deployed at the Minuteman-400 silo of the 50th Strategic Missile Squadron (Francis E. Warren Air Force Base, Wyoming). At the same time, the silos were strengthened to the level of 118–2 psi. inch PSI (000-2 kg / sq. cm). In 200, the MX missiles were decommissioned. The silos are abandoned, and the 140th squadron has been disbanded.

This level of protection made it possible to reliably hide the best Soviet missiles not only from W-62 / Mk-12 warheads (capacity - 170 kilotons, KVO - 270 meters), but also more powerful and accurate W-78 / Mk-12A (capacity - 350 kilotons , KVO - 220 meters) of the American Minuteman-3 rocket. In total, there are 58 such silos, and from next year Sarmatians will be placed in them.

On August 21, 2017, the US Air Force commissioned Boeing and Northrop Grumman to conduct a three-year preliminary study on a new ICBM to replace the Minuteman III.

In July 2019, Boeing stated that it would not submit its preliminary design, justifying the refusal by Northrop Grumman's acquisition of Orbital ATK, a manufacturer of solid rocket engines for various Boeing launch vehicles in the past. According to Boeing, the competitor has full control of the solid propellant rocket engine market and thus can reduce the cost of its own system.

“The Pentagon should buy a new intercontinental ballistic missile, and upgrading Cold War missiles is not an option. You cannot extend the life of a Minuteman III."
His comments were in response to calls by Democratic senators for the Joe Biden administration to rethink the Pentagon's massive investment in the Ground-Based Strategic Deterrent (GBSD) intercontinental ballistic missile, or even phase it out altogether. The funds will be used to finance the B-21 strategic bomber program.

In September 2020, the Air Force awarded Northrop Grumman a $13,3 billion contract to develop the GBSD over the next seven years. The program will cost tens of billions of dollars more over the next two decades.

The Biden administration is expected to review Pentagon nuclear budgets next year. weapon and modernization strategy. A coalition of progressive anti-war think tanks called on Biden to cut military spending substantially and consider ending the GBSD program. There are more than enough opponents of the new ICBM inside the United States. The high cost of the program is facing criticism from its opponents, who propose, in particular, to upgrade the old LGM-30G Minuteman III.

"Welcomes Biden's review, but trying to save money with a Minuteman III successor is unwise. I don’t understand how a person in a think tank who doesn’t actually hold a rocket in his hands, doesn’t look at the details, the cables, all the details inside, can make recommendations.”
He insisted that the Minuteman III was already past the point where it could be upgraded:

"This thing is so old that in some cases the technical documentation no longer exists."
According to him, any drawings that still exist are so old that people who can understand them are no longer alive.

In March 2019, the W87/Mk21 thermonuclear warhead was selected for GBSD, partially replacing the W78/Mk12A warhead on the Minuteman III. It is not clear if the W78/Mk12A will be fitted to the GBSD as a temporary measure or just the W87/Mk21 warheads, but the estimated warhead production start date has been pushed back to 2030, a major delay from the original estimated entry into service in early 2027.

It is obvious that the new rocket will not be the size of Minuteman III (35 tons) and, rather, the resuscitation of the Midgetman project. Flight tests of the American advanced intercontinental ballistic missile Ground Based Strategic Deterrent (GBSD) are scheduled for 2023. This summer, the rocket received its own name - LGM-35A Sentinel.

The Strategic Missile Forces also have a "joker" - the 621st and 767th (in a month the 767th will go into operation in full force) missile regiments of the 13th Dombarovskaya RD, armed with 6 launchers of ICBM UR-100 N UTTKh with the latest combat equipment - the Avangard hypersonic complex. In total, the latest and relatively new ("Topol-M") missile systems - 291.

In total, the missiles carry up to 894 nuclear warheads of two types of medium power class and one type of high power class: 500 kilotons, 750 kilotons and 2 megatons. Of course, that's not all.

There are also outdated systems. The 35th and 7th Guards Divisions - three of their regiments are armed with Topol complexes, a total of 27 launchers and two "heavy" ones - the 13th and 62nd divisions have at their disposal two and three regiments, respectively, armed with old Soviet R-36M2, only 30 missiles. Despite the fact that these missiles are fresher than the American Minutemen, their release was completed in 1996, the second - in 1992.

Still, their combat value is low. It is to replace the R-36M2 that new heavy ICBMs RS-28 "Sarmat" should come. From open sources it is known that the RS-28 "Sarmat" in terms of performance characteristics will be very close to the "Voevoda". The first modification of the "Satan" R-36M (SS-18 Mod 1) is equipped with a monoblock warhead 15B86 with a capacity of 24 megatons with a throw weight of 7 kilograms. The latest monoblock modification R-500M36 "Voevoda" (SS-2 Mod 18) has slightly reduced warhead power and weight - up to 6 megatons and 20 kilograms, respectively.

In total, according to expert Robert Johnston, during the entire period of operation of the SS-18, from 20 to 60 monoblock modifications of the rocket were deployed.

Avangard, according to SAP 2018-2027, will appear in two regiments of six missiles each in the 13th missile division (Dombarovsky, Yasnaya), a total of 12 carriers in a monoblock version. The carrier of the first Avangards will be the UR-100N UTTKh (15A35) ICBM. The missiles are deployed not in their own silo 15P716, but in someone else's 15P718M.

The Avangard hypersonic unit is a fairly large object. Length - 5,4 meters, weight, according to various estimates, from 2 kg to 000 kg. On the UR-2N UTTH, only one block can be placed, on the Sarmat - two or three.

Note that the three-block Avangard is just one of the options for combat equipment. The standard equipment of the Sarmat ICBM is the classic MIRV (MIRV) with 16 medium-yield warheads of 500 kt or 10 high-yield warheads of 2 Mt each.

Over the past 10 years, RFNC-VNIIEF (Sarov) has created three new types of universal (for ICBMs and SLBMs) ​​warheads in nuclear equipment of small, medium and high power classes - respectively 150 and 500 kt, 2 Mt.

On March 1, 2018, in his already legendary speech, President V.V. Putin partially revealed the performance characteristics of the missiles, he noted:

“The Sarmat missile carries many more warheads, and they are much more powerful than those of the Voyevoda.
"Voevoda" at the time of adoption carried the most advanced 15F174 warheads, in terms of specific power they surpassed the W-2 / Mk-88 warheads adopted a year later by the American Trident-5 SLBMs, which to this day are considered the most advanced in nuclear warheads. US arsenal.

The newest Russian warheads, with the same weight of 450 kg as the old Soviet 15F174, are 2,7 times superior in terms of specific power. As for warheads of the medium power class (500 kt), they are twice as light and theoretically they could be deployed on a missile up to 20 units with some limitation in flight range. Therefore, the designers of the rocket limited their number to 16 units.

If today we compare the total throwable weight of ground forces of ICBMs, then it is approximately the same: for the United States - 333 tons, for Russia - 339,75 tons. Approximate equality in the ground component of nuclear forces, both in terms of the number of warheads and their weight.

Curiously, in the configuration declared in the TTZ, with the deployment of 400 LGM-35A Sentinel ICBMs, the total throw weight of US ICBMs will be reduced from 333 tons to 106 tons, the number of warheads will be reduced from 800 units to 400 with a slight decrease in the total capacity of American ICBMs from 270 Mt to 190 Mt. With the deployment of the Sarmat missile group, the total “thrown weight” of Russian ICBMs will more than double, to 799,75 tons.

The total yield of the Strategic Missile Forces warheads will increase from the current 482,5 Mt to 1 Mt.

Unfortunately, in the other two components: SLBMs and strategic bombers, the situation is not so rosy. We'll have to get on the "Sarmatians". Again, as in Soviet times, the Strategic Missile Forces will pull for everyone.