October 27 2012
3
Advances in the development of aircraft in the late 1960-x allowed to arm the Navy high-speed aircraft with vertical takeoff and landing (VTOL), which did not require special devices for takeoff / landing. These aircraft are highly efficient. weapons ship, because they solved a wide range of tasks, as in the interests of fleet, and individual ships at a distance of up to 800 km.

The main objectives of the aircraft with GDP were anti-submarine guarding of warships at the exit from basing places, and during the campaign - search, tracking and destruction of enemy submarines, communication between ships and communication with the coast, delivery of personnel and urgent cargo, landing of marine corps. In addition, aircraft carried out ice reconnaissance, aviation provision of landing operations, maintenance of expeditionary vessels, as well as search for schools of commercial fish. 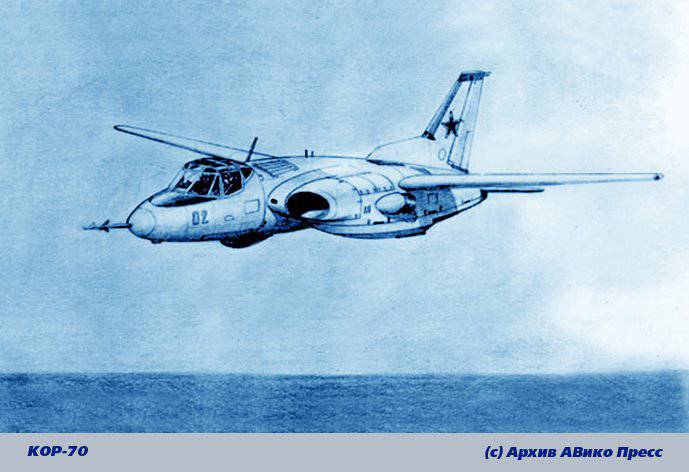 As can be seen from the list of tasks, the range and speed of flight, along with the vertical take-off / landing, were the main ones. requirements imposed on aircraft. The helicopters, which at that time were in service with naval aviation, had good take-off and landing characteristics, but were inferior to aircraft with GDP in range and speed.

The effectiveness of search and reconnaissance operations, combat and rescue missions, transport flights in the open sea, the higher, at higher speeds and distances from the ship, they can be performed. A shipboard aircraft with a GDP in this respect has significant advantages over a helicopter.

The seaplane of the ship-based, in addition to good flight performance, as an aircraft, which is operated in the open sea, must have certain seaworthiness. That is, to take off and land on the water, to stay afloat and drift, mooring or anchorage if necessary.

A relatively small offshore aircraft with GDP in difficult weather conditions can take off and landings, at sea conditions around 3 points and even slightly higher. At the same time, it is necessary to take into account that the vertical take-off / landing mode is the most intense, in connection with which take-off / landing in an aircraft mode over the same modes vertically have significant advantages.

Aircraft takeoff / landing modes increase payload, and as a result, the duration and range of flight, save limited resources of lifting engines.

The conditions for the use of such aircraft make it possible to abandon GDP in all cases of off-flight flights on the high seas, when weather conditions allow for taking off in an aircraft-like manner from water. This requirement is also true for onshore operation of aircraft with vertical take-off and landing, where there are conventional airfields.

If possible, a shipboard aircraft with a GDP should be an excellent amphibious seaplane, whose LTH correspond to the level of modern requirements.

Engineers Berlin I. and Korchagin V., who worked at the Bartini Design Bureau on a maritime theme, in 1969 developed on a proactive basis the concept of a shipboard aircraft with a GDP. The aircraft received the designation KOR-70. 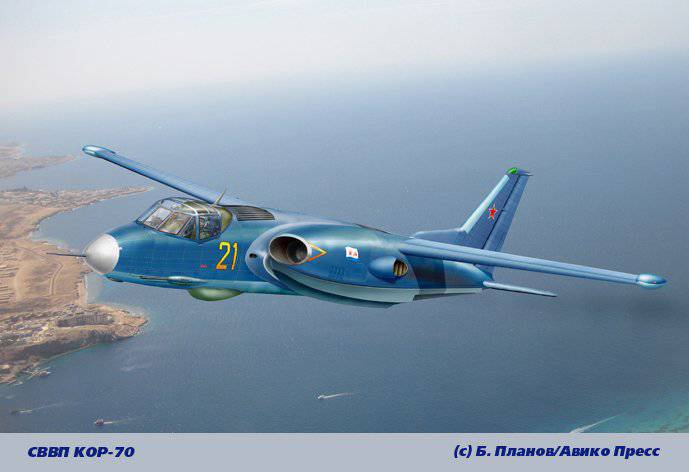 At the same time, an aircraft with a vertical take-off and landing of the Yak-38 was adopted by the naval aviation. Korchagin recalls:

“We were aware of the position of many of the fleet aviation, including Alexander Nikolaevich Tomashevsky, the deputy commander of the Navy aviation. Yes, this "Yak" can come in handy as a strike aircraft for short distances with small combat loads. However, the vertical take-off was the cause of the huge expenditure of fuel and, as a result, of a short range, low combat load. In general, for the Navy it was not a big find, and moreover it was not a panacea for all ills.

We decided to propose such a concept. About 80 percent of the seasonally perturbed sea makes it possible for an aircraft to take off from the water as a seaplane, without spending a huge amount of kerosene for lifting, without resizing the engine power several times. In this regard, we conceived the plane, which, if necessary, could take off from the deck vertically, but the rest of the time (80 percent of the time for the season) can be launched by crane and take off in the usual way. ”

The proposed scheme made it possible to most confidently assemble retractable floats, cruising and lifting engines, while retaining the necessary volumes for accommodating equipment, fuel and crew, and the size of the cargo compartment.

One of the features of the project was that the lifting engines had to be performed block-type, with the possibility of quick dismantling in ship-based conditions.

At the end of the 1960-s, vertical take-off and landing aircraft were almost at the stage of creating experimental samples. Their applications have not yet been determined.

At that time, checks required approval of a so-called. "aeronautical" airplanes with vertical takeoff / landing and their ability to compete with aircraft that do not require vulnerable and expensive concrete strips and taking off from the ground. Also, the dispute was not resolved whether the aircraft with GDP should take off and land only vertically or with run and run. 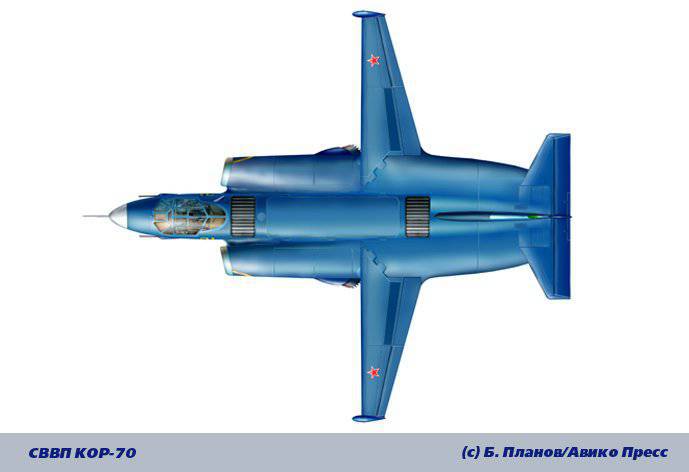 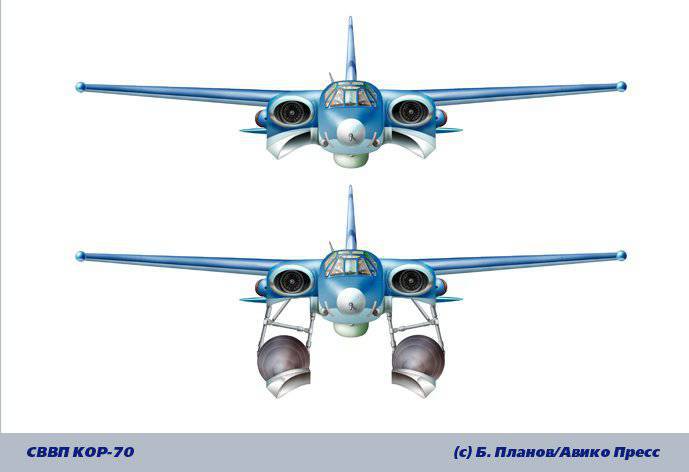 The proposals from Berlin and Korchagin gave unambiguous answers to these questions:
- the area of ​​effective use of aircraft with vertical take-off and landing is exclusively ship-based aviation;
- the ship's deck is the best runway, and ship-based bases create favorable conditions for the "aerodrome-free" operation of aircraft;
-sea aircraft with a GDP should take off / land in an aircraft-like manner on the water, using vertical take-off / landing only when the sea is in a state of turbulence (when there is more than 3 points).

Comprehensive studies of such schemes allowed us to expect that the parameters of the aircraft, stated in the proposal, could be implemented. The use of serial cruise and lift engines, an amphibious chassis that did not represent a technical problem, conventional materials and structures, as well as the small size of the aircraft, allowed us to expect that the proposed aircraft in GDP during 2-3 years could be created and tested.

However, alas, the design of the aircraft did not work out in detail, an application was made only for the development of the advance project. And in Minaviaprom, they reacted traditionally to him: "What else did the designers find out and climb into their own business?"

As a result, the project was buried, although the sailors showed great interest to it. In the proposed aircraft, they saw a workhorse, about the same as in the 1940-s. was lee-xnumx. “Not thirsty”, unpretentious, but at the same time having an opportunity of vertical take-off.

The project was not given a turn. Some time later, in the design office, active work on the BBA-14 and KOR-70 aircraft was abandoned.

The aircraft with vertical takeoff and landing of the KOR-70 was supposed to solve a wide range of tasks that faced the deck aircraft of the Navy: from anti-submarine and assault operations to landing and transport operations. The design of the KOR-70 is riveted, duralumin, with reliable anti-corrosion protection, which ensured normal operation in sea conditions. 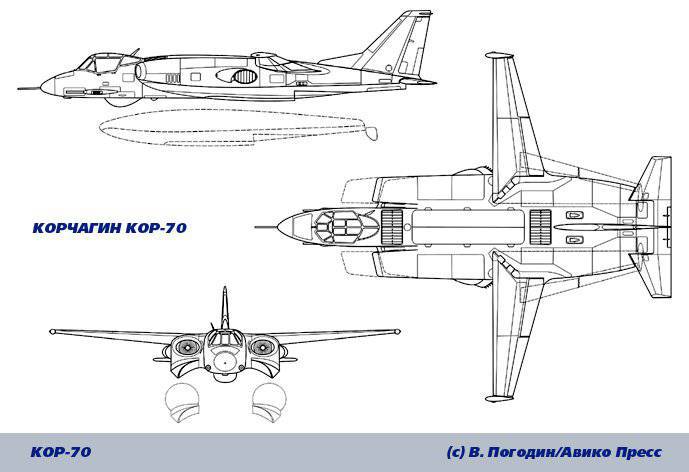 The powerplant consisted of 2 lift-marching and 4 lifting engine. Depending on the task being performed, the mass of the commercial cargo or combat load was 1 ton, in the cargo hold in the airborne variant could fit up to 12 people.

The multipurpose purpose of a ship-based aircraft with a GDP was determined by the need for modular configuration of special equipment and units, depending on the requirements of the customer. Installation of units and devices in mass production could be carried out at the final stage of assembly. Thus, it was hoped to achieve the possibility of assembling the aircraft along a single technological cycle.

It was assumed that the fuselage will be all-metal. The fuselage with the wing center section was a single unit. In the forward part of the fuselage was a double crew cabin, equipped with ejection seats. In the lower part, there was an observation radar of the lower hemisphere, and small arms could be placed under the cab. In the central part there were two compartments of lifting engines and an extensive cargo compartment. The wing consisted of a center section and folding consoles having a negative sweep. The wing mechanization included single-slit flaps at half the span. To control the roll during the vertical take-off at the ends of the wing jet rudders were made. Their working fluid was the air, which was taken from the lift-propulsion engines.

The powerplant of the aircraft with the KOR-70 GDP included two AI-25 lift-main engines with rotating nozzles. Each take-off thrust - 1500 kgf.

The lifting engines RD36-35F (thrust of each 2900 kgf) were located in the rear and front parts of the fuselage in pairs. The air intakes were at the top and closed with the help of flaps. There were a total of four lifting engines. The exhaust flaps of these engines were to be used for directional control and pitch during takeoff and landing. To the bottoms of the floats, ski runners were attached, which gave amphibious qualities to the landing gear. To create the floodability and the necessary reserve of buoyancy, soft cylinders were fastened to the floats, filled with air when landing on the water.

The shock-absorbing device was part of the mechanism for the release and cleaning of floats. The advantages of such a take-off and landing device consisted in the fact that the hydrodynamic characteristics were determined by the rigid part of the float, which was submerged to the waterline, and did not depend on the deformation of the cylinders that were above the waterline. If necessary, the float-ski chassis was replaced with a wheeled one. 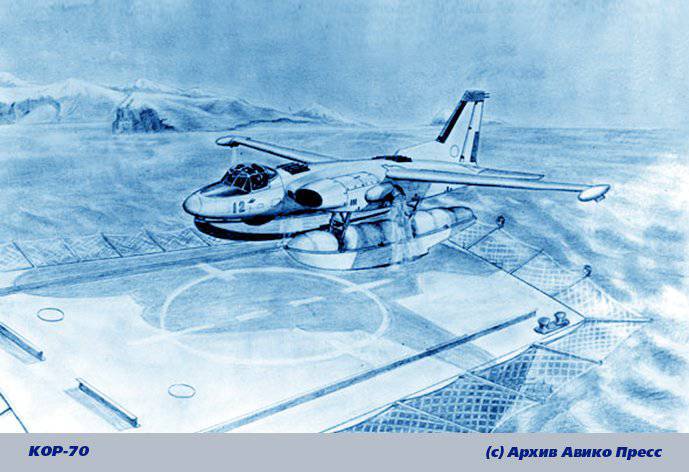