Amphibious boats of the project 21820 "Dugong"

October 24 2012
23
Project 21820 landing craft the Dyugon code (according to NATO codification - Dyugon) is a series of the latest Russian airborne landing craft, the lead ship of the series is the Ataman Platov D-105 boat. Currently, it is the only ship built under this project and is part of the Caspian flotilla. Today, 2 more boats of this project are under construction - one is being built at OJSC Vostochnaya Verf in Vladivostok, the second at OJSC Volga Shipbuilding Plant in Nizhny Novgorod. Also in 2011, a contract was signed for the construction of a series of 3 landing craft of project 21820 at OJSC Yaroslavl Shipyard. The first of the three ships of this series was laid down at YaSSZ on January 18, 2012, the ship received the name "Denis Davydov."

The lead boat of this project was laid in 2006, and since 2010, it is part of one of the Caspian flotilla formations and was named Ataman Platov in honor of the commander of the Great Don Army, whose regiments in 1814 were in Paris and gave the French capital a new the type of catering establishments is a bistro (from the Russian word “quickly”), since the Cossacks in Parisian cafes demanded that they be served as soon as possible. It is worth noting that the landing craft laid in Yaroslavl will receive the names of the heroes of World War 1812 of the year, which in the year of its 200 anniversary seems to be really relevant. Three boats under construction in Yaroslavl will be named “Denis Davydov”, “Lieutenant Rimsky-Korsakov” and “Midshipman Lermontov”. The last two were members of the naval guard crew and participated in the 1812 campaign of the year. 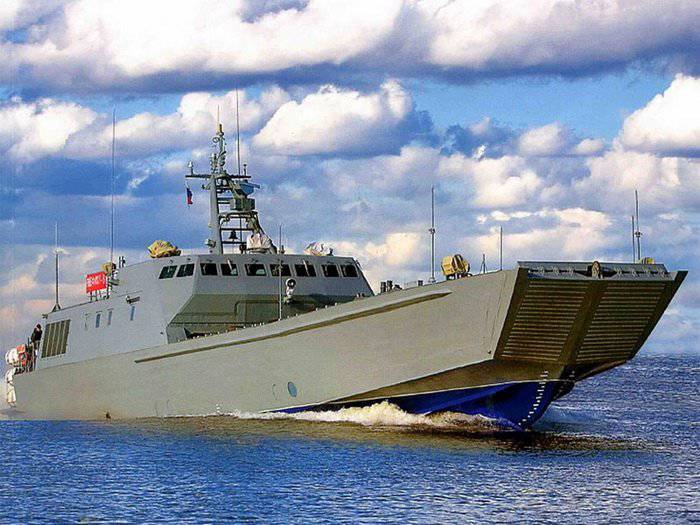 The landing craft of the 21820 “Dugong” project was developed in Nizhny Novgorod by the specialists of the “Hydrofoil Central Design Bureau”. R. E. Alekseeva. This design bureau specializes in the field of scientific research, design and creation of high-speed ships, ships and boats with dynamic principles of maintenance. Constructors and scientists of this design bureau created ekranoplans that have no analogues in the world, or as they are also called - “Caspian monsters”. This is the rocket "Lun" and the airborne "Eaglet", which were able to reach speed during the main mode of motion to 500 km / h. For projects created in the "Central Design Bureau for hydrofoil vessels" to them. R. E. Alekseeva produced more than 8 000 hydrofoil ships for both civilian and military purposes.

Currently, speed during amphibious operations plays an increasing role. The faster equipment and troops will be delivered to the bridgehead, the greater the chance that success in this area will be developed. The experience gained by Russian sailors during the use of the 11770 “Serna” landing boats once again confirmed this axiom. But another thing became obvious: today, as an independent combat unit, even more high-speed ships are required, with greater airborne capability and payload. At the same time, the amphibious and mobile characteristics of the new ships had to correspond to the similar characteristics of boats of the 11770 project. These circumstances became the impetus for the creation of a new airborne boat on an air cavity, which was the boat of the Dugong project 21820. 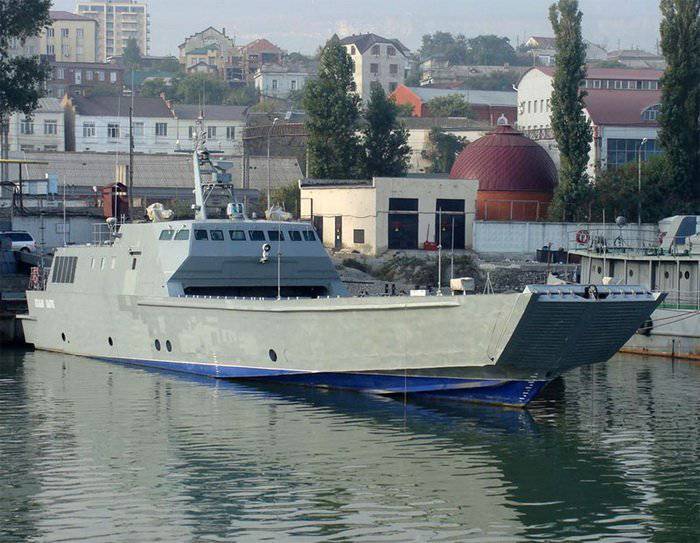 The total displacement of landing craft on a Dugong air cavity is 280 tons, the greatest length is 45 meters, the greatest width is 8,5 meters., The draft is 1,9 meters. The maximum travel speed is 35 knots at the height of the 0,75 wave meter. The ship can also be used in storm conditions with a wave height of no more than 3,5 meters. Amphibious boats of the 21820 project are equipped with two diesel engines of the M507A-2 type with the power of 9 000 hp. each. The maximum cruising range is 500 nautical miles. Cargo hold dimensions are 27x6,8x2,34 meters, maximum payload is 140 tons, the landing craft can carry up to 3-x MBT or 5 BTR.

In the control system of the landing craft "Dugong" together with the sea information and computing complex MIVK 6P-08B, the gyrocourse indicator GCU-5, the LI2 1 lag and the engines that are equipped with tachometers of the ТЭ-204 type are also used by the autopilot "Agat -NXX". Production "NPP" ANFAS "Saratov city). At the same time, it is possible to use an upgraded autopilot “modified 3”. 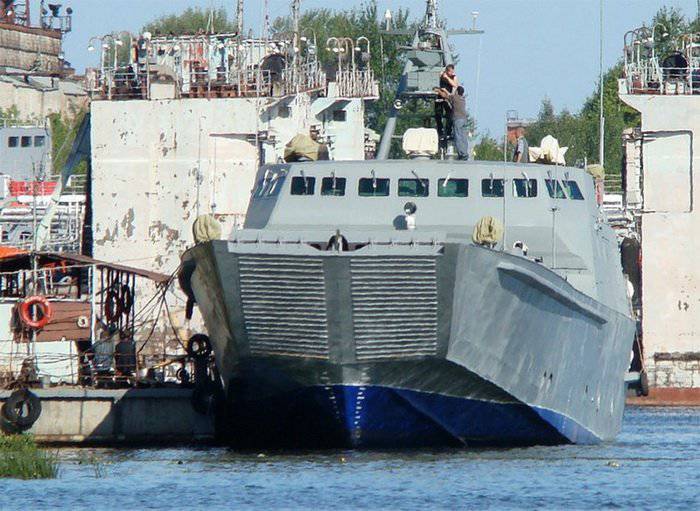 The propulsion and steering complex of the landing craft, which includes a ventilated jet propulsion unit, does not stand for the dimensions of the hull of the vessel and makes it possible to work effectively in conditions of clogged waters and shallow water. The crew of the landing craft is 6 people. On the landing boat is armed. In the standard configuration, it consists of 2-x large-caliber machine guns MTPU caliber 14,5-mm, as well as 8 MANPADS of the type “Needle”. At the request of the customer, the composition and equipment of weapons can be changed.

The fairly high combat performance of the ships of this project, in particular the only landing craft Ataman Platov in service, was confirmed as part of the strategic maneuvers Center-2011, which also took place in the Caspian Sea. As part of the exercises, the amphibious assault ship quickly delivered to the battlefield and landed armored vehicles and marines on the unequipped coast. 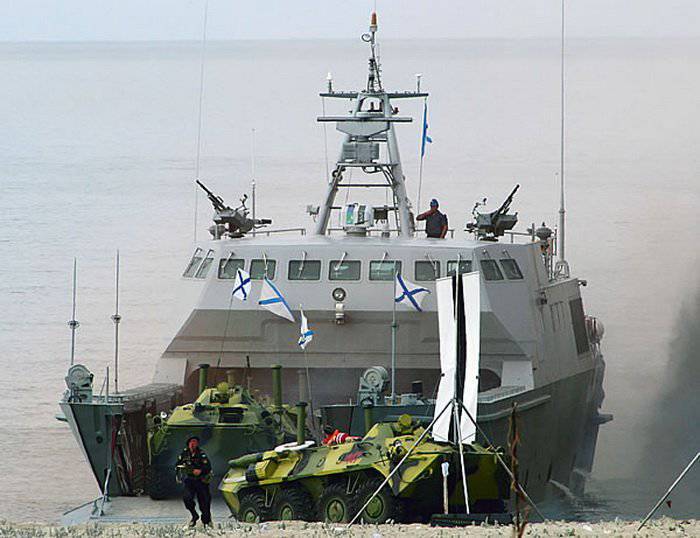 It is reported that these vessels can be used together with the landing helicopter docks of the Mistral project, which are being built today for the Russian Navy. Tank assault boats of projects 11770 "Serna" and 21820 "Dugong" are fully suitable for the "Mistral" in terms of their overall weight and size characteristics. Such boats in conjunction with aviation the Mistral group is designed to deliver arms and landing forces of a dock ship to the shore.

Currently, the construction of 21820 project ships for the needs of the Russian Navy continues. And the Central Design Bureau for the SEC them. R. E. Alekseeva continues to work on improving the boats of this project and the creation of new modifications. All of them differ from each other in the main power plants, layout solutions, propellers, travel speed and displacement. But at the same time, everything is perfectly suitable for use in amphibious operations in the waters of closed and semi-enclosed seas, gulfs and archipelagic waters.