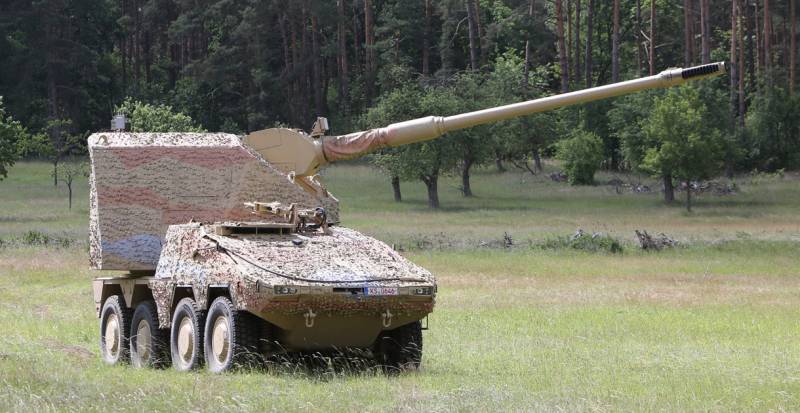 Ukraine again demands from Germany to provide it with self-propelled artillery, and this time we are talking about combat vehicles of the RCH-15 type. The German government has approved such an appeal, and signing of the relevant documents is expected in the near future. However, the planned contract does not differ in large volumes, and deliveries of finished equipment under it will begin only in a few years.

On the preparation of the next episode of the German-Ukrainian military-technical cooperation on September 17, the publication Welt am Sonntag reported. According to him, the issue of a possible delivery of the RCH-155 self-propelled guns has been discussed over the past few months, and only now the results of these processes and plans for the future have become known.

Since spring, the German company Krauss-Maffei Wegmann has repeatedly made proposals for the supply of various armored vehicles and weapons to Ukraine. In particular, it was proposed to build and transfer to the Kyiv regime a certain number of RCH-155 self-propelled guns. However, the release of such equipment required official permission from the German federal government.

According to Welt am Sonntag, in mid-July, the Ukrainian Ministry of Defense sent a request to the German military department for the supply of 18 self-propelled guns from KMW. It was proposed to pay for the production of these machines to the German side - as part of the financial assistance provided to the Kyiv regime. 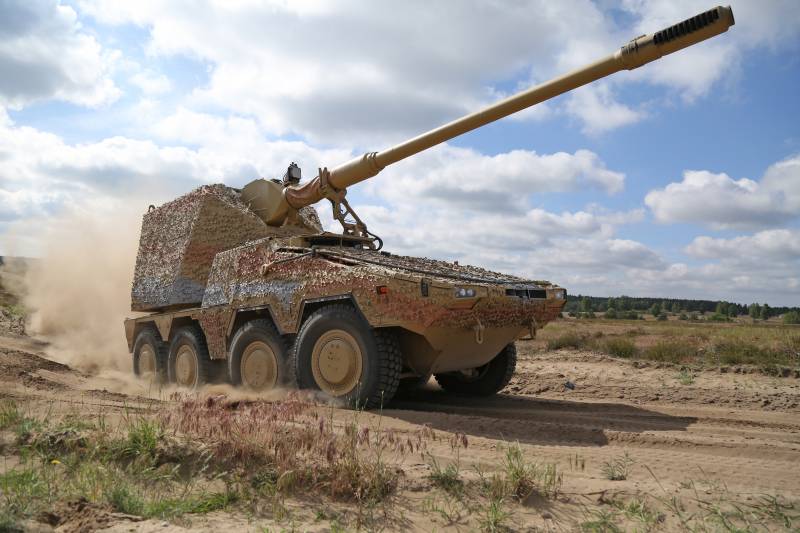 Over the past two months, the German government has considered the Ukrainian request several times, but for one reason or another, no decision has been made. Only recently the application was officially approved, and now new bureaucratic procedures will begin.

The government will issue a license to KMW to manufacture the required self-propelled guns and related products, as well as permission to export them. An official Ukrainian-German agreement should also appear, defining all the conditions for cooperation: the amount of equipment and other products, the timing of production and transfer, the cost and payment procedure, etc.

According to the latest data, Ukraine wants to receive 18 German-made self-propelled guns. The manufacturing company expressed its readiness to provide spare parts and train personnel. The total cost of all these products and services reaches 216 million euros - 12 million for each self-propelled gun, spare parts for it, etc.

This raises the issue of timing. Even at the preliminary proposal stage, KMW warned that the start of production and the subsequent assembly of equipment would require several years. It will take 30 months from the signing of the contract to the shipment of the first batch of self-propelled guns. Thus, if the document is signed right now, self-propelled guns will be handed over to Ukraine only in March 2025. Any delays at the stage of preparing and signing the agreement will lead to an understandable shift in the start of deliveries. 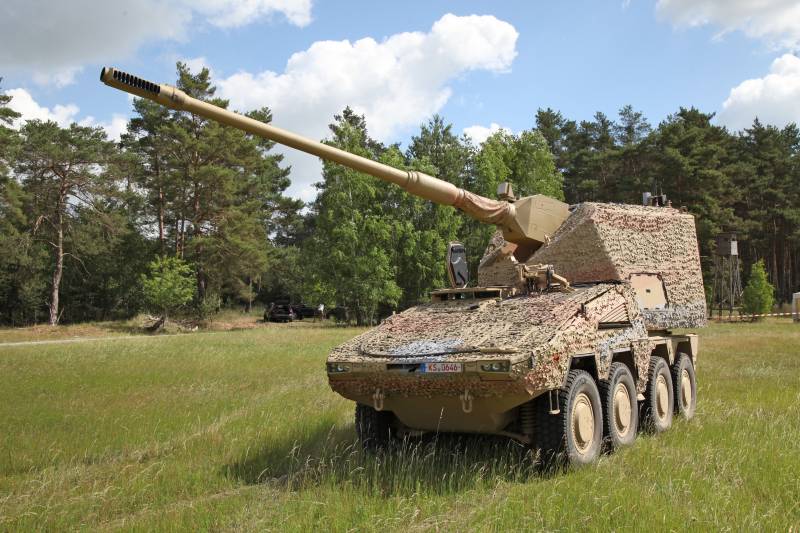 In search of a customer

The RCH-155 ACS is one of the results of the AGM (Artillerie-Geschütz-Modul or Artillery Gun Module) project, which has been created at KMW since the early 155s. The purpose of this project was to develop a unified combat module with a XNUMX-mm gun, ammunition supply and fire control. It was planned to put such a module on different chassis and get different self-propelled guns with the same fire characteristics.

The AGM module, made with extensive use of developments and components of the PzH 2000 serial self-propelled guns, was first demonstrated in 2004. Soon, in 2005-2006. The product has been field tested. It was reported about obtaining high fire performance and demonstrating advantages over existing counterparts.

In 2008, the development company for the first time introduced a full-fledged self-propelled guns with an AGM module. The tower was installed on a redesigned tracked chassis from the ASCOD 2 infantry fighting vehicle. The resulting sample, called Donar, was repeatedly shown at exhibitions. Tests were also carried out, during which it was possible to confirm the full compatibility of the chassis and the combat module.

A simplified version of the self-propelled guns based on a truck was proposed. In this case, the AGM module was installed on an Iveco four-axle chassis. It was reported about the fundamental possibility of building similar self-propelled guns on a different base. 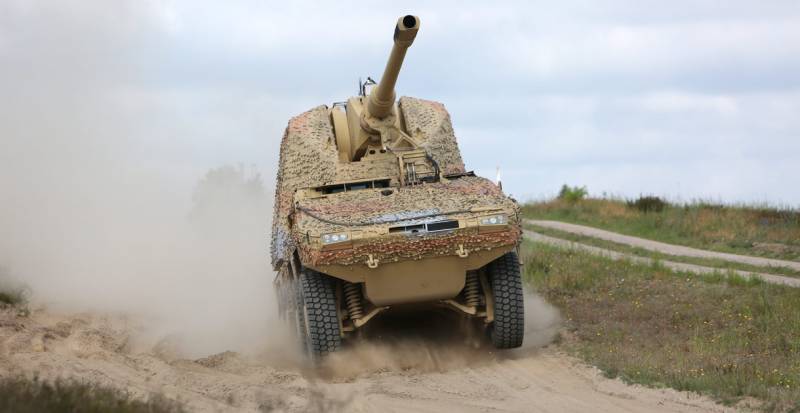 In 2014, they introduced self-propelled guns based on the Boxer wheeled chassis. In this case, a modified AGM module with an increased degree of automation was used. It was this sample that received the designation RCH-155 (Remote Controlled Howitzer 155 mm). At the end of the tenth years, such a self-propelled gun passed the necessary tests. During these events, special attention was paid to the strength and stability of the high wheeled chassis.

The AGM module and self-propelled guns with its use are regularly demonstrated at all major foreign exhibitions and attract the attention of visitors. However, orders for such equipment have not been received until recently. Even the Bundeswehr was not interested in German development. As a result, Ukraine is the first customer for RCH-155 and AGM. Whether new contracts for such equipment will follow is unknown.

The RCH-155 self-propelled guns are based on the four-axle Boxer chassis. Its version is used with a double control compartment and a stern platform for installing a payload. The combat weight of the self-propelled gun does not exceed 39 tons, of which 12,5 tons are accounted for by the AGM module. With the help of an 815 hp engine. the speed on the highway is not less than 100 km/h.

An AGM combat module is located in the rear of the chassis. This is a large armored tower with weapons and related systems. The design of the module provides circular horizontal guidance and elevation angles from -2,5° to +65°. It is alleged that the self-propelled guns can fire laterally without the risk of rocking and capsizing. At the same time, at the request of the customer, it is possible to install an additional stabilization system. 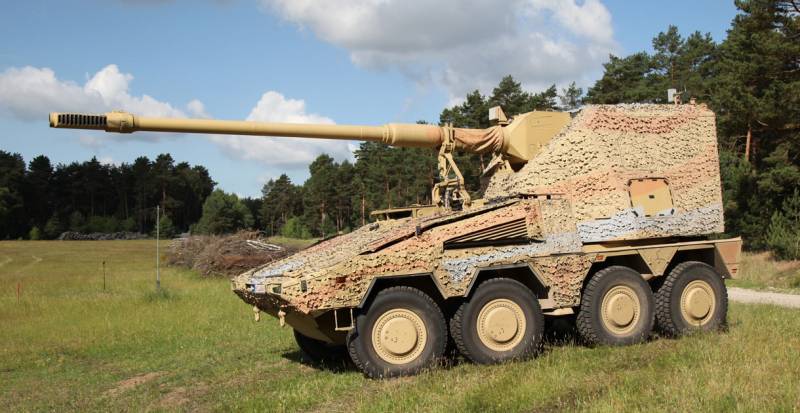 The main armament of the AGM is a 155 mm rifled howitzer with a barrel length of 52 klb. Separate loading shots with a modular powder charge are used. The autoloader holds 30 rounds and 144 modules; the supply of ammunition into the barrel is carried out without human intervention. The rate of fire is up to 9 rds / min. The maximum firing range of a conventional projectile exceeds 30 km; for the most advanced active-reactive ones, it reaches 54 km.

The ACS crew consists of only two people. The commander-operator fully controls the combat module using an automated workstation in the control department. At the same time, the AGM module has an additional control post. The fire control system includes navigation aids, a ballistic computer, various sensors, incl. a radar projectile velocity meter, as well as a programmer for working with controlled fuses.

From the point of view of the declared characteristics and capabilities, the German ACS RCH-155 is a successful and modern model. It is made using proven components and technologies, and innovations do not lead to high technical risks. At the same time, sufficiently high combat characteristics are provided, and in this respect, AGM, at least, is not inferior to other modern artillery systems.

However, as practice shows, the AGM module and self-propelled guns with it are not popular on the market. In the 18 years that have passed since the first showing of the fighting compartment, KMW has not received a single firm order. The exact reasons for this are unknown. Probably, potential customers are attracted by the declared performance characteristics, but repelled by the high complexity and cost of the system. 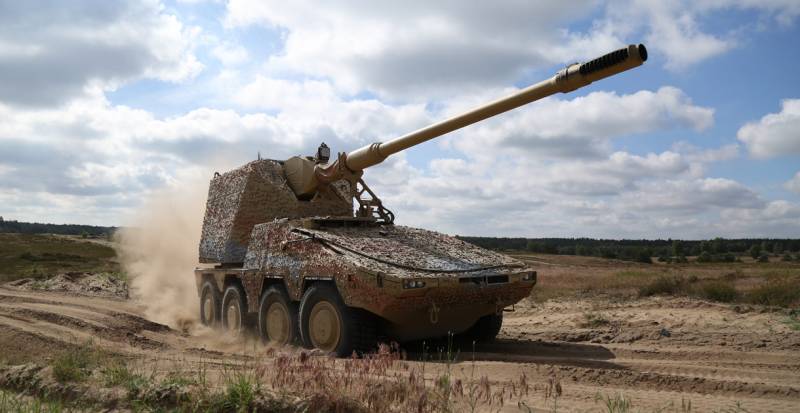 In addition, other claims are made to the RCH-155. First of all, the stability of such a self-propelled gun when driving over rough terrain and when firing into the side sectors raises doubts. The development company rejects such suspicions and talks about the stability of the machine, and also offers additional measures.

However, in the current situation around a possible Ukrainian order, cost and technical features are not the main problem. Questions are caused by the required volumes and the stated terms of delivery of equipment. So, the Ukrainian side wants 18 imported self-propelled guns. This is enough to equip only a few units, and there is simply no talk of restoring ground artillery. At the same time, so many vehicles are enough to shell cities and civilian objects. In this case, any projectile does a lot of damage, and the number of self-propelled guns no longer matters much.

However, KMW is not yet able to provide ready-made RCH-155s. It will take two and a half years to start production and assembly of just 18 self-propelled guns. Deliveries will be able to start no earlier than the spring of 2025. Whether they will be relevant by that time is a big question. It is likely that the current Kyiv regime simply will not have time to get the desired self-propelled guns.

Thus, foreign partners again promise Ukraine advanced weapons, but their delivery will have to wait. In the case of RCH-155 self-propelled guns, such a wait will stretch for 30 months - not counting the time that will now be spent on all the remaining approvals and signing of documents. In this case, we are talking about a small batch of armored vehicles, which, even with immediate shipment, could not affect the general situation.

However, the situation around the contract for the RCH-155 suits the German side quite well. The authorities allocate money to help Ukraine, and a substantial amount will go to their German manufacturer. KMW, in turn, receives a lucrative contract. In addition, she has opportunities to advertise her self-propelled guns, which are not yet popular among customers. And whether this technique will have time to the front is not so important.