65 years ago in the USSR, the first launch of a ballistic missile

October 18 2012
10
13 May 1946 of the Year saw the light of the decision of the Council of Ministers on the development of jet weapons in the USSR. According to this decree, scientific research institutes and design bureaus for rocket technology were formed in the country, as well as the Kapustin Yar State Test Site was created. Already by October 1, 1947, the Kapustin Yar test site was fully prepared for test missile launches. October 14 1947 A-4 rockets, also known as German V-2 rockets, designed by engineer Werner von Braun, were delivered to the newly opened test site by two special trains. After 3 of 18 of October 1947 of the year from the Kapustin Yar test site, the first launch of the A-4 ballistic missile in the Soviet Union was carried out. The rocket was able to climb to an altitude of 86 km. and reached the Earth's surface in 274 km. from the place of its start.

From this launch, a series of flight tests of A-4 rockets in the USSR began. Like the US space program, the Soviet program began with the launch of captured, and later modernized, A-4 (V-2) rockets. In the period from October 18 to November 13, the 1947 of the Kapustin Yar test site produced 11 test launches, with good luck and bad luck, but all this concerned only missiles, and not the available ground equipment. Later, the first Soviet ballistic missiles built by Sergei Korolev were launched at the Kapustin Yar test site: Р-1, Р-2, Р-5, Р-11, as well as geophysical rockets created on their base. The missiles designed by Mikhail Yangel were tested here: P-12 and P-14.

31 August 1959 on the landfill for the first time in stories a silo-based missile was launched, it was the launch of the medium-range missile P-12, which, after launch, was able to reach the calculated area, marking a new era in the history of the development and creation of Soviet missile technology. 16 March 1962 of the year Kapustin Yar from a rocket test range is transformed into a cosmodrome - the Cosmos-1 satellite was launched here. From this cosmodrome, small research satellites are launched, for which launch vehicles of comparatively low power were used. 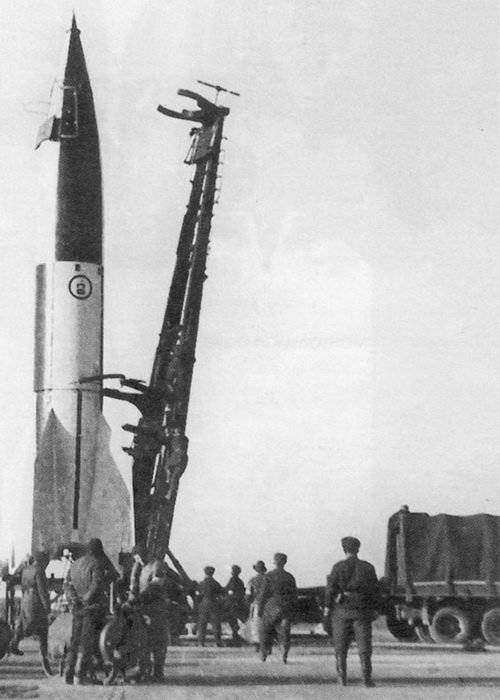 Preparing A-4 rocket for launch, Kapustin Yar test site
From October 14 1969, the Kapustin Yar begins to function as an international space center, after it launched the Intercosmos-1 satellite, developed by experts from socialist countries. Also from the cosmodrome, the Indian satellites Ariabhata and Bhaskara, the French satellite Sneg-3, were launched. Kapustin Yar played a very important role in the training of qualified personnel in the field of testing of rocket and space technology, as well as leading personnel for other space centers.

Kapustin Yar (often abbreviated as Kap Yar) is a missile military test site located in the northwestern part of the Astrakhan region. Officially, it is called 4-th State Central Interspecific testing ground of the Russian Federation (4 GCMP). The date of creation of the test site is considered to be 13 May 1946, it was created to test the first Soviet ballistic missiles. The area of ​​the polygon is about 650 square. km (occupied an area of ​​up to 0,4 million hectares), mostly located on the territory of Russia, but also occupies part of the land of Kazakhstan within the Atyrau and West Kazakhstan regions. Orbits of inclination, degrees: maximum 50,7, minimum 48,4. The administrative and residential center of the landfill is the city of Znamensk - a closed territorial entity (CATF). The population of the city 32,1 thousand people. The landfill received its name from the name of the ancient village of Kapustin Yar located on its territory, which from the south-east adjoins the city of Znamensk.

The first test launch at the test site was carried out on 18 on October 1947, as already mentioned above, on this day the A-4 (V-2) rocket was launched. After that, on 10 years from 1947 to 1957 years, Kapustin Yar was the only place in the USSR to conduct tests of domestic ballistic missiles. From September to October 1948, and then 1949, were tested here by P-1 missiles, from September to October by 1949, by Р-2, in March, 1953 was tested by Р-5. Even as part of the first series of test launches in 1947, the Kapustin Yar test site began to be used as a place to launch geophysical rockets. So on the rocket launched on 2 in November 1947, scientific instruments were placed. Since then, this tradition has been maintained until such time as the USSR did not develop specialized geophysical rockets B-1 and B-2. At the same time, Kapustin Yar was still the place of their start. In the future, the launch of meteorological rockets was added to the launch of geophysical rockets. And in June, 1951, the first rocket with dogs on board started from here. 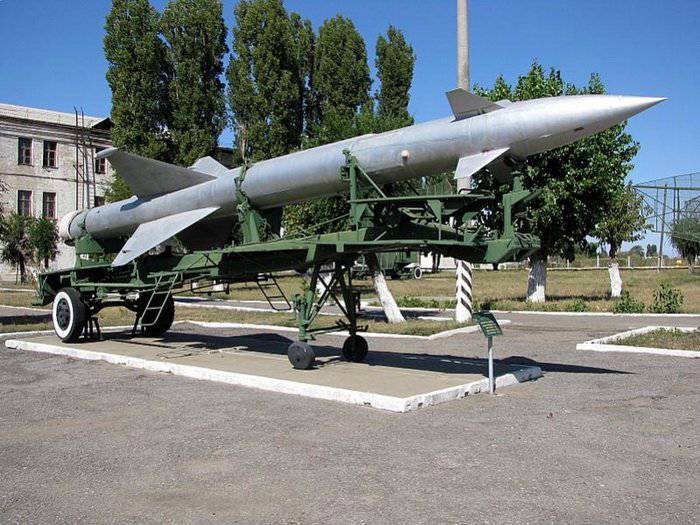 Anti-aircraft missile B-300. Museum of Kapustin Yar
At the beginning of the 1950-s, in addition to the active program of rocket launches, the development and establishment of the test base of the test site was under way, new technical and launch complexes were built. 20 February 1956, nuclear missile tests took place at the test site weapons. Launched from here, the P-5 rocket was equipped with a nuclear warhead and delivered it to the Astrakhan steppe, where a nuclear explosion thundered in a desert area. Later on, new intercontinental ballistic missiles were tested here more than once.

According to the data open today, starting from 50-s of the last century, at least 11 nuclear tests were carried out at the Kapustin Yar test site (nuclear explosions were carried out at an altitude from 300 m to 5,5 km.), And the total power of the blasted devices was approximately 65 atomic bombs that were dropped on hiroshima. In addition, around 24 thousands of various guided missiles were blown up on the test site, as well as 177 samples of various military equipment were tested, here, according to the agreement on the destruction of medium and short-range missiles, 619 RSD-10 “Pioneer” missiles were destroyed.

After 1962, the Kapustin Yar cosmodrome assumed the role of a cosmodrome for launching small research satellites and rockets. This specialization remained with him until the 1988 year, when the need to launch research satellites was significantly reduced and the launches from the Kapustin Yar cosmodrome were stopped. Despite this, technical positions and launch pads for launch vehicles are still maintained in a healthy state and, if necessary, can be used again at any time. 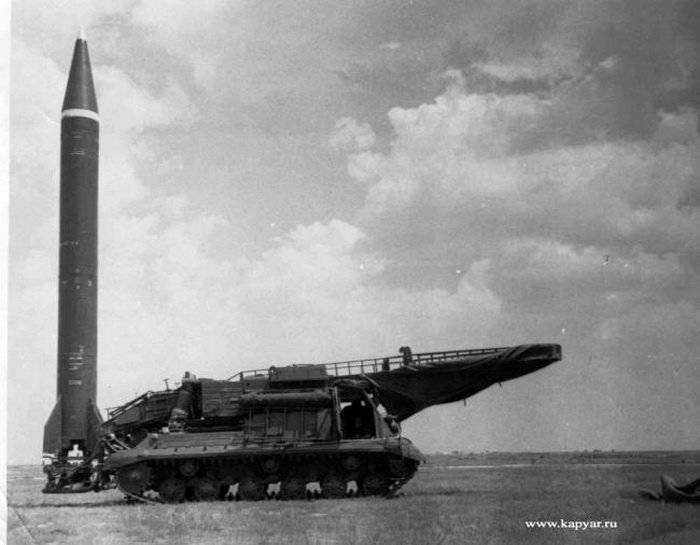 Exercises at the Kapustin Yar training ground, 1966 year
Effective use of the latest rocket technology is very difficult to imagine without the necessary personnel - well-trained rocket specialists. Understanding this, the Directive of the Ground Forces GC from 20 in May 1960 of the Year on the territory of the Kapustin Yar state testing ground was established the Ground Forces Rocket Forces Training Center, the main task of which was to train and retrain missile specialists, to work out the regulatory documents for comprehensive combat activity of rocket troops.

At the same time, not only strategic missiles were tested at the test site. Over the years, a variety of medium-range and short-range missiles, missiles and air defense complexes, cruise missiles were tested here, and operational-tactical complexes, for example “Tochka”, were also tested here. It was here that the famous air defense complex C-300PMU was tested. In the 2000-ies here were tested the latest anti-aircraft missile system C-400 "Triumph". This complex is the most advanced air defense system in the world and can be successfully used to combat all types of existing as well as promising means of air attack.

Years succeeded each other, generations of people changed, the equipment was improved, and the test site was still one of the largest test and research centers in the country. He gave a start in life to many samples of rocket and space technology and currently has highly qualified test and scientific personnel, is equipped with modern technology and equipment. Today, the Land Forces and the Russian Navy, the Strategic Missile Forces and the Airborne Force, Air Defense and the Air Force came together on this proving ground. Here, unique experiments are still being conducted, missile launches are planned and carried out in the interests of all types of troops, and new systems are being tested. Training centers train mechanics-warriors of the world-famous Topol-M complexes, rear specialists.