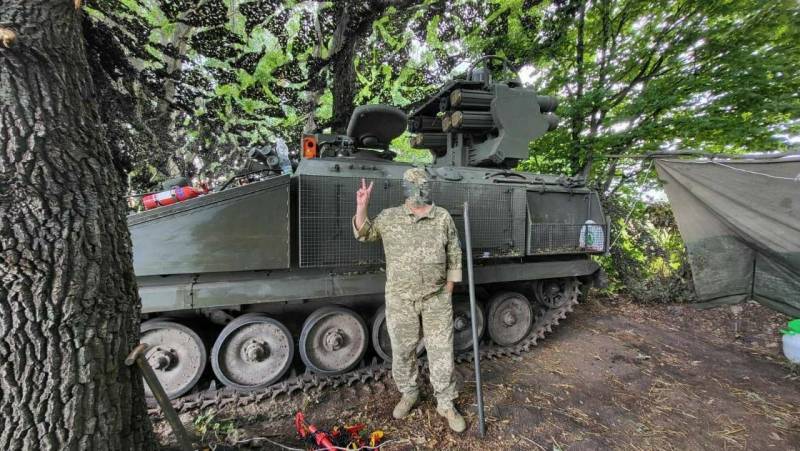 Back in the spring, Great Britain promised to help Ukraine with the supply of modern anti-aircraft weapons. In particular, they talked about the imminent transfer of a certain number of Stormer HVM self-propelled missile systems. The wait was seriously delayed, and such combat vehicles entered the combat zone only in mid-July. However, by this time it became clear that the British anti-aircraft systems are not distinguished by high performance or combat qualities.

In mid-March, the UK Department of Defense announced that it would soon transfer a large number of Starstreak portable air defense systems to the Ukrainian army, and also organize the training of operators. The possibility of sending other anti-aircraft systems was also not ruled out.

In mid-April, the British press revealed new details of the ongoing processes. It was reported that two weeks earlier, at one of the training grounds of the Ukrainian delegation, a self-propelled near-zone air defense system Stormer HVM was demonstrated. As a result of this event, Prime Minister Boris Johnson ordered the preparation and transfer of a number of such complexes to Ukraine.

On April 25, this information received official confirmation from Secretary of Defense Ben Wallace. According to him, the delivery of Stormers is really being prepared, and this step will give the Ukrainian army new opportunities. At the same time, the number of equipment and the timing of its transfer were not reported. 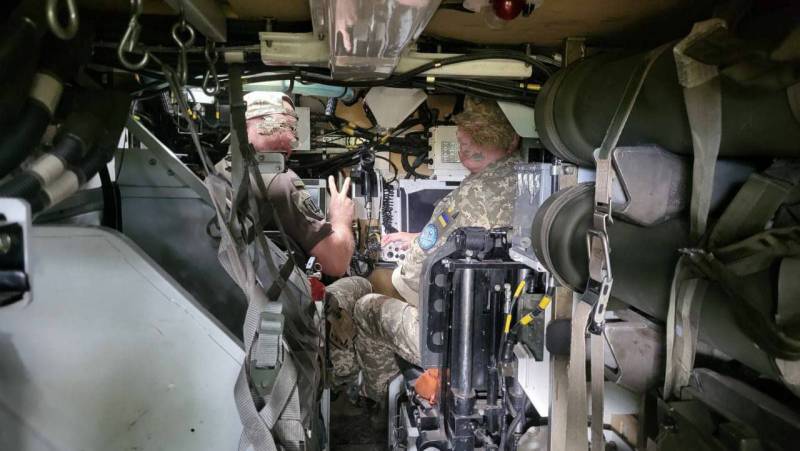 Interior habitable compartment
For the next three months, Stormer HVM air defense systems disappeared from News. Only in the twentieth of July, the British Ministry of Defense announced the transfer of six combat vehicles and several hundred Starstreak missiles to the ally for them. Literally the next day, the first photos of this technique appeared on Ukrainian resources.

One of the published images shows a self-propelled air defense system in a makeshift parking lot among trees and under a camouflage net. The second photo was taken inside the combat vehicle and shows the crew at their workplaces, as well as the ammunition load. It is easy to see that in both cases the complex is not on combat duty.

Thus, there is already reason to believe that the Stormer HVM air defense systems have already entered the combat zone. At the same time, information about the combat use of such equipment and its missiles against the Russian aviation have not yet arrived. Perhaps they continue to hide it in camouflaged positions in order to avoid losses. And while such a “plan” justifies itself, no losses among the Stormers were reported either.

The Stormer HVM product is a near-field tracked self-propelled air defense system designed for use in military air defense. He is able to accompany troops on the march and in places of concentration, search for and hit various types of air targets. With its help, it is proposed to protect troops from aircraft and helicopters, which the operator can observe. 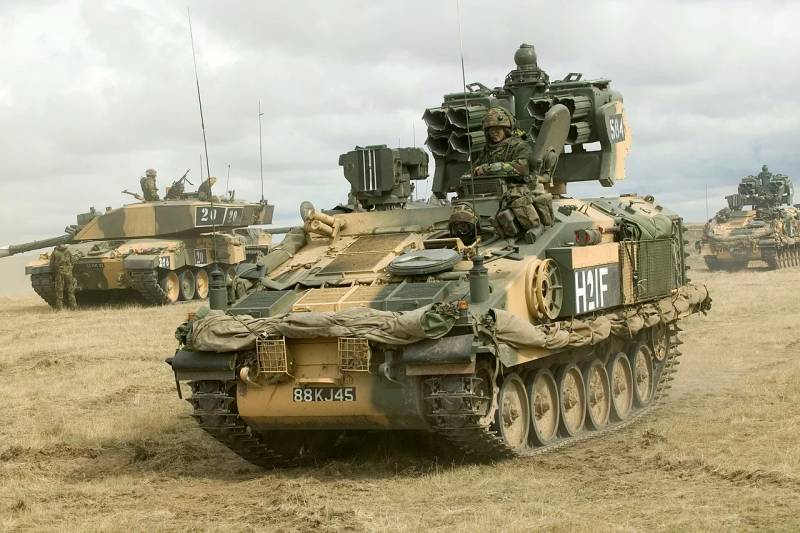 British air defense system on exercises
The air defense system is built on the chassis of the Stormer serial armored personnel carrier developed by Alvis. It is a tracked vehicle with anti-bullet / anti-fragmentation armor. A 250 hp diesel engine is placed in front of such a hull, giving high mobility and cross-country characteristics. The main volume of the hull, which was originally the troop compartment, is used to accommodate operators and ammunition.

An anti-aircraft weapon station is located on the roof of the Stormer HVM. This is a rotary device with two rocking blocks, each of which is equipped with four missile transport and launch containers. Also on the combat module there is an optical-electronic system with a laser channel for searching for targets and controlling missiles. The module is controlled remotely, from the operator's workplace inside the case.

The Stormer air defense system uses guided missiles from the portable Starstreak complex. Such a rocket has a length of 1,4 m with a diameter of 130 mm and a launch weight of 14 kg. The rocket is made two-stage: the first stage is a solid-propellant engine for acceleration to a speed of about 4M. The second, combat stage is made in the form of three separate combat elements with their own guidance systems. Each element weighs approx. 900 g and carries 450 g of explosive.

Guidance is used on the principle of flight in the beam. The automation of the complex illuminates the target, and the missile or submunitions are held in the beam and hit the target. The declared firing range is 7 km. Reach in height - the same 7 km.

From a technical point of view, the British Stormer HVM air defense system is a good example of its class. It has some positive qualities that can increase combat effectiveness, but it is not without objective shortcomings. However, in order to realize all the positive potential and leveling problems, a competent organization of service and operation is necessary. 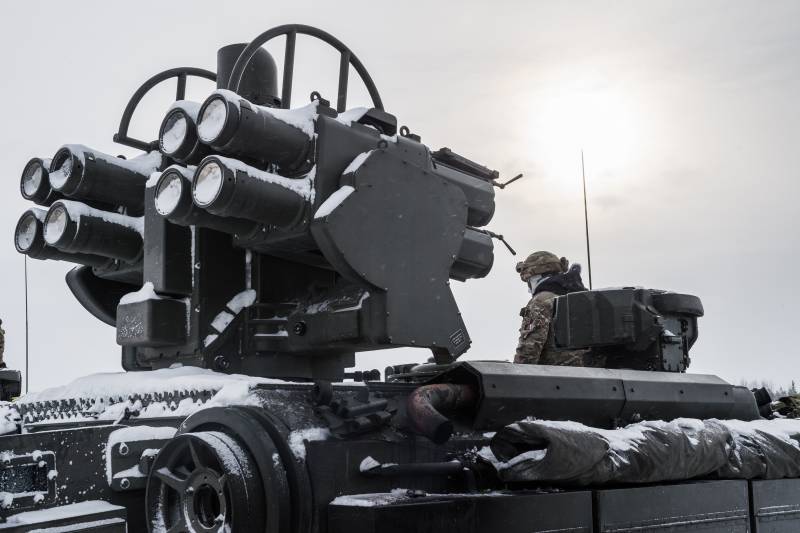 Launcher for Starstreak missiles
The Stormer HVM air defense system is built on the basis of a concept popular abroad, which provides for the installation of missiles for MANPADS on a self-propelled chassis. Due to this, mobility is increased, the ammunition load ready for use is increased, it becomes possible to install a full-fledged OES and other devices, etc. At the same time, all the characteristics of the rocket are preserved, and there is also no need to develop a new ammunition.

The British "Stormer" is distinguished by a high degree of automation of combat systems. Also, the positive qualities include a fairly large ammunition load - 8 missiles on the launcher and 8 inside the hull with the possibility of quick replacement.

The combat vehicle has only optical search/guidance aids. This means that during operation, it does not unmask itself with radar signals and does not give out its location. It can remain invisible until almost the moment the rocket is launched. Guidance along the laser beam is characterized by high noise immunity. At the same time, unlike the portable complex, the combat vehicle has automatic equipment to keep the laser beam on the target. This reduces the likelihood of guidance failure due to the fault of the air defense system itself.

However, the main disadvantages of the Stormer HVM air defense system are associated with the chosen means of search and guidance. The machine has only one laser, which is why you can only fire at one target at a time. Guidance is carried out only under the condition of direct visibility of the target. The range of detection, tracking and firing directly depends on weather conditions. The same applies to the laser illumination of an air target, as well as the reception of the beam by the rocket instruments.

The self-propelled complex is built on the basis of a missile from MANPADS, which has a limited range and height of destruction. Developed countries are armed with aviation weapons with a launch range of more than 7 km. With the help of such missiles or bombs, enemy aircraft can destroy the Stormer HVM without risk to themselves. 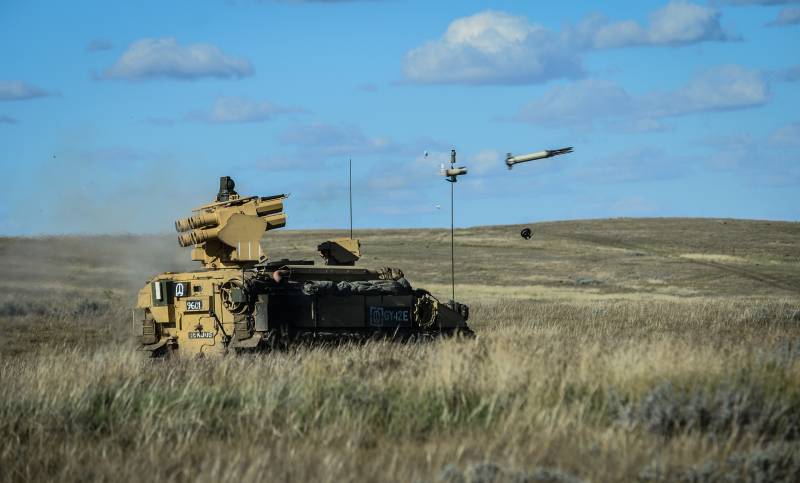 Start of a rocket
There are other problems associated with limited range. So, the air defense system of the near zone cannot work independently. It should be part of a large multi-component military air defense, including radar equipment, fighter aircraft and ground-based air defense systems. In the absence of one or another component, the effectiveness of such defense is sharply reduced. A single Stormer HVM is virtually useless against a properly organized attack.

All these negative factors are fully manifested in the case of Ukraine. Moreover, new problems and limitations are added. Thus, only six Stormers were transferred to the Ukrainian army, which is not enough to restore or re-equip military air defense. Their calculations have undergone accelerated and reduced training, and also have no work experience. Their opponent is the Russian Aerospace Forces, well-equipped, armed and experienced.

It should also be remembered that Starstreak missiles have been delivered to Ukraine since March and were allegedly used extensively on the battlefield. However, evidence of any success of such weapons missing. Practice has shown that Russian planes and helicopters are capable of dealing with such a threat or moving away from it. There is every reason to believe that the transfer of these missiles to a self-propelled platform will not be able to fundamentally change the situation.

Thus, the recent delivery of British air defense systems to Ukraine has a number of curious features that give it a specific and dubious appearance. So, they promised to transfer the equipment back in April, but real deliveries took place only three months later. Only six cars were allocated, which is extremely small against the backdrop of recent Ukrainian losses. Finally, the delivered Stormer HVM systems with Starstreak missiles have limited capabilities and performance - and this also reduces the potential for British assistance.

As a result, the supply of British air defense systems will have no practical effect and will not help the Kyiv regime. Despite this, the UK gets the opportunity to once again demonstrate its commitment to the general ideas of NATO and to indicate support for the Kyiv regime. And this time, such tasks can be solved at the cost of only six not the newest air defense systems.