Mines PTKM-1R fight with the enemy 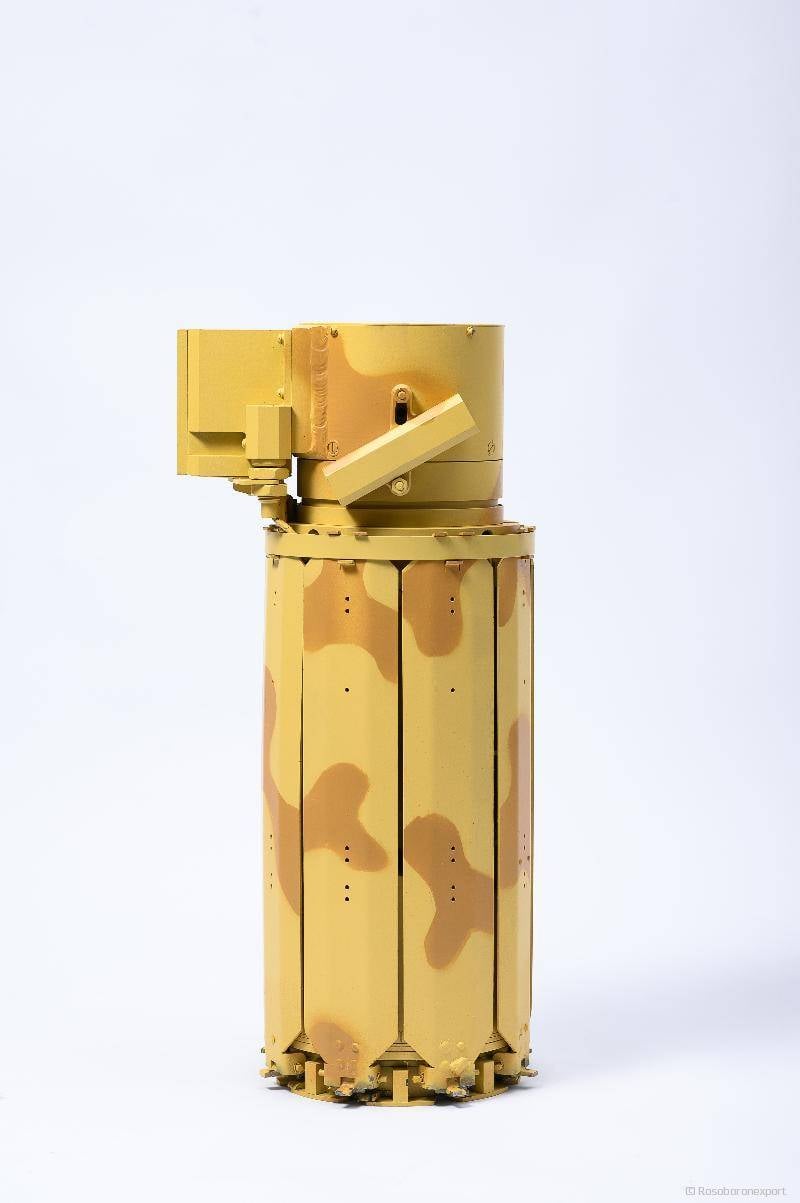 Back in the spring, it became known that Russian engineering troops were using anti-tank anti-roof / roof mines PTKM-1R during the Special Operation. Now appeared news about the success of this weapons and hit real targets. Such munitions reportedly helped stop Ukrainian Tanks and thwart an attack attempt in the Kherson region.

Mines in the fields

The first reports on the use of PTKM-1R products in the framework of the Special Operation appeared at the end of April. Mines of this type were seen in the territories of Donbass, at that time occupied by Ukrainian formations. At the end of May, the Ukrainian side spoke about the presence of such mines near Kyiv. At the same time, the operation of mines and the defeat of armored vehicles was not reported. It is quite possible that such cases took place, but the Ukrainian military did not advertise them for obvious reasons.

Information of this kind appeared at the end of May. Then the publication Life wrote about the use of "smart" mines by our army to protect the controlled areas of the Kherson region. By that time, the mines were already working on real targets, confirmed their capabilities, and also helped repel the enemy attack. Referring to the military-civilian administration of the Kherson region, it was reported that in recent days, Ukrainian troops have made two attempts to attack in the area with. Davidov Brod. Both attacks failed, and the Ukrainian side lost equipment and personnel. 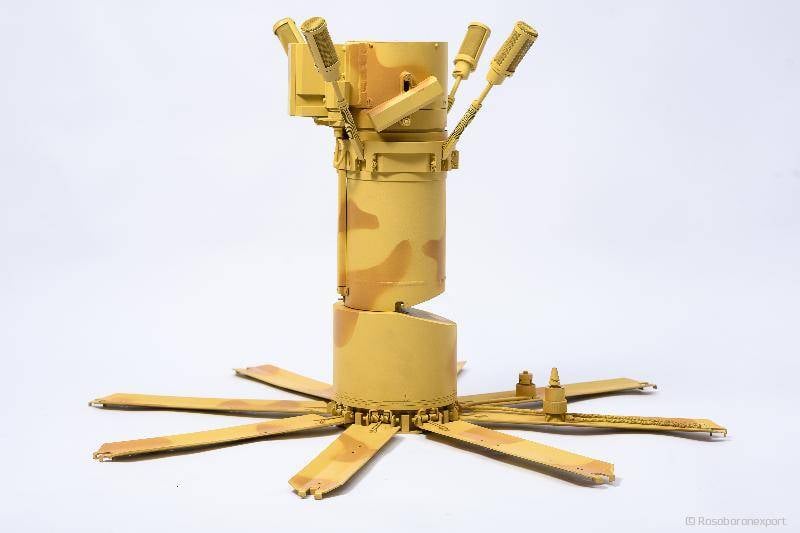 Mina in working position
Survivors and captured Ukrainians report that at the beginning of the attack they did not encounter Russian tanks, artillery or aviation. But then they suddenly came under a blow of some unknown kind. It was he who became one of the key factors in the defeat of the advancing group and the failure of the attack.

The news indicated that this blow was carried out precisely by PTKM-1R anti-tank mines. The Ukrainian offensive went through a barrier based on such ammunition, and they worked on the targets that appeared. Then other forces and means completed the defeat of the advancing units. How many mines worked and how many armored vehicles managed to hit is not reported. However, the results of their work are already known.

From design to application

The existence of a new anti-tank roof mine PTKM-1R became known in 2018. By this time, the Nizhny Novgorod Plant named after. G.I. Petrovsky and the Ministry of Defense managed to complete the design work and began testing prototypes. At the same time, the main features and general capabilities of the mine became known. Soon, product models began to be shown at domestic and foreign exhibitions.

Two years ago, in July 2020, reports appeared in the domestic press about the launch of mass production of new mines. From sources in the industry it became known that such products are produced in small batches and shipped to the engineering troops. It followed from this that the PTKM-1R are being mastered by sappers and can be used in exercises. 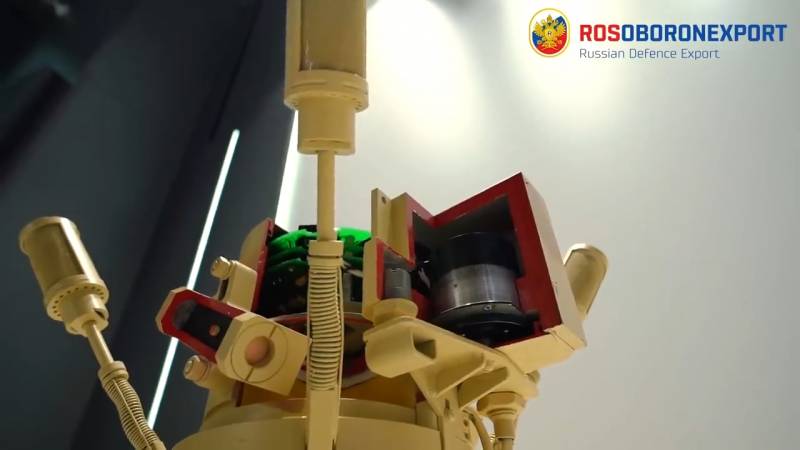 Split layout
Finally, in April of this year, the first news about the combat use of anti-roof mines appeared. Together with other novelties of Russian production, they are being tested by practice within the framework of the Special Operation. As is now known, mines are placed in positions and go about their main business. They hit enemy armored vehicles, hinder the maneuver of the remaining armored vehicles and simplify the combat work of our other forces and means.

The PTKM-1R product is a land mine designed to destroy enemy armored vehicles. It implements several new interesting ideas, which ensure the search and destruction of only designated targets, and also achieve high combat performance.

The mine is structurally divided into two parts: a transport and launch container and a combat element. The container is a cylindrical device with eight spring-loaded support petals at the base. On top of it are folding target sensors. Between the sensors is a cylindrical combat element. The assembled mine has a height of 510 mm with a diameter of about 220-230 mm. Weight - 19,9 kg, incl. 2,8 kg warhead.

TPK mines are equipped with a bottom seismic target sensor and four acoustic sensor microphones in the upper part. It also contains a power supply and control electronics. The upper part of such a TPK is movable and has drives for guidance in two planes. 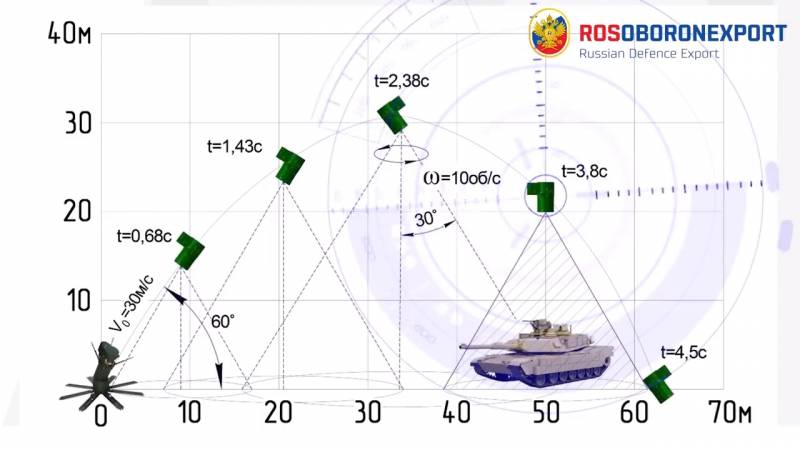 Operating principle
The target is hit with the help of the so-called. combat element. This is a shaped charge in a separate case, equipped with its own electronics. The element has infrared and radar target sensors, as well as a control system. Charge penetration - not less than 70 mm of homogeneous armor.

Roof mine PTKM-1R is installed manually on the ground; the use of remote mining is not provided. When transferred to a combat position, the mine opens the petals and rises vertically, and also lays out the target sensors. After setting on a platoon, she is ready for work. In this case, the sapper must set the self-liquidation time from 1 to 10 days.

During the "combat duty" mine monitors sound waves in the air and the ground. According to the frequencies and amplitude of oscillations, the electronics detects approaching objects and recognizes them. When an armored vehicle is detected, it also calculates the approximate range to it. When the target approaches 50 m or closer, the mine turns and tilts the TPK, after which it shoots the combat element. The latter flies along a ballistic trajectory and tracks objects below it. Two target sensors give the command to detonate, and the target is hit by a cumulative jet.

The “smart” anti-tank mine PTKM-1R is much more complicated and more expensive than traditional ammunition, but it is capable of solving more complex tasks and has a number of other important features. All this makes it an effective tool for interfering with the movements of the enemy and / or destroying his combat vehicles. 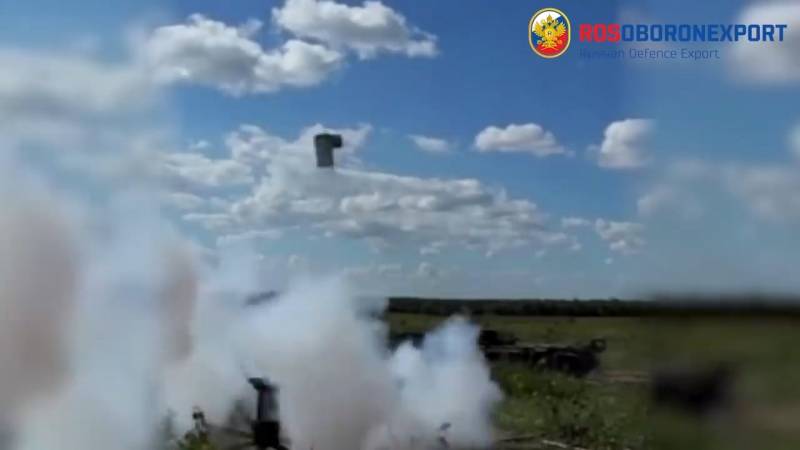 Launching a combat element
The main advantage of the PTKM-1R is its large range. One such product is capable of controlling a section with a diameter of 100 m, and several mines can block a larger area, both in front and in depth. Each of the installed mines will hit only one target, but this will be enough to provide the necessary impact on enemy tanks.

The mine is equipped with a whole set of target sensors and advanced electronics, thanks to which it can detect and hit only targets of the selected type. This allows you to knock out the most valuable combat units and not spend expensive ammunition on other objects. In addition, the defeat of foreign objects, such as civilian transport, is excluded.

PTKM-1R is distinguished by improved combat potential. So, the fired combat element has its own target sensors, which increase the probability and accuracy of the defeat. In this case, the cumulative ammunition attacks the target from the upper hemisphere - to the least protected projection.

The PTKM-1R product is one of the most interesting and successful recent domestic developments in the field of land mines. With its help, you can seriously increase the potential of minefields and simplify the solution of a number of combat and other tasks. At the same time, the complexity and high cost of a new mine is offset by the effects achieved.

Right now, such weapons are being used against Ukrainian armed formations, and the first information about their successes is coming in. It can be assumed that the recent episodes of PTKM-1R mines in the Kherson region were not the first. They probably won't be the last either. Smart mines will continue to increase their combat score, confirm their potential and help achieve the goals of the Special Operation.