October 13 2012
46
The gun of Yarygin is weaponwhich causes a lot of controversy recently, many mark it as an excellent substitute for a Makarov pistol, even more people speak of it as a weapon extremely unreliable and unsuitable to be in service with the army and police. One could say that how many people have so many opinions, and a large number of negative reviews are based not on the personal experience of using these weapons, but on the fact that someone said somewhere, read it somewhere, but given that the criticism was domestic weapons came into vogue, everyone considers it his duty to comment on PJ, although many have seen the gun only in the picture and even weakly present the scheme of its automation work, let alone draw objective conclusions. Let's try to find the truth, well, and at the same time find out what is wrong with this weapon, and why it causes a flow of negative emotions in most people. 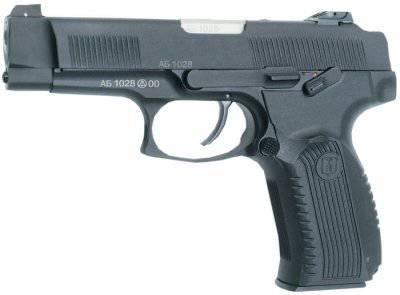 Need to start with stories making this weapon. In 1990, the Ministry of Defense announced a competition to create a new pistol, which would replace the Makarov pistol in service. Despite all its simplicity and reliability, the PM uses not the most effective ammunition by modern standards 9х18, which do not meet modern requirements, which was the reason for the creation of a new weapon. Given the not the simplest time, this contest stretched over 10 years. So, the Yarygin pistol itself was introduced in 1993, and became the winner only in 2000. Since 2003, this gun and the new ammunition 9x19, differing in their characteristics from the Western model for the better, were adopted by the army. And at the end of 2008 and the Interior Ministry expressed a desire to get a new weapon. However, given how many different models of pistols are being positioned as a replacement for the PM, it is impossible to say anything concrete. Mass production of PU for the army was established only in the 2011 year, which can be considered as confirmation of the existence of problems with weapons that had to be fixed. In addition to the gun Yarygin for the army and the Interior Ministry, which was named in accordance with the ongoing competition "Rook", there are also several other options for these weapons. Thus, an export version of the Viking pistol with the designation MP-446 is produced, there is a sports pistol with the same name, but already referred to as the MP-446C, it differs in its weakened design, which allows the use of only standard 9x19 cartridges. Well, it’s better to keep silent about the traumatic version and the pneumatic one. 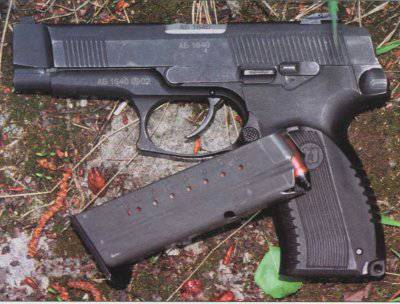 The appearance of the pistol Yarygin not quite normal. First of all, the half-hidden trigger, which is almost completely hidden in the casing-shutter, catches the eye. This was done so that in the process of removing the weapon he did not have something to cling to the equipment or clothing of the shooter, however, this decision is quite controversial, since it makes it difficult to pre-pull the trigger if the hands are protected with thick gloves, and the back of the weapon is for this looks quite unusual. On the other hand, provided that a double-action firing mechanism is installed in the weapon, the trigger can not be touched at all during the operation of the weapon. The remaining controls are fairly familiar and are represented by a standard set. So, the fuse switch is duplicated on the right and left sides, only the slide delay lever is located on the right, the magazine eject key can be installed both on the left and right sides of the weapon, this is done by the shooter himself. Standard sights do not have the ability to adjust, however, the rear sight is mounted on the cover-bolt on the dovetail-type seat, which makes it possible to replace it with a more convenient aiming device. The safety bracket of the pistol is rather large; it allows fire even if the shooter’s hands are protected by thick gloves; the front has a deflection for the index finger of the second holding hand while holding the weapon with two hands. It feeds a pistol from a detachable magazine with a capacity of 17 cartridges. You can also find more capacious stores with a capacity of 18 cartridges, they belong to weapons manufactured before the 2004 year. The gun can be either with a steel or with a plastic frame, and if previously there was a strict separation and “Rook” had only a frame of steel, now it can already be found in a lightweight version. 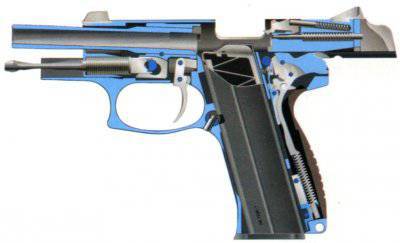 The principle of operation of the automatic pistol is built according to the scheme with a short stroke of the barrel. The barrel is locked by moving the breech breech in a vertical plane, which is realized through the interaction of the figure cut in the tide under the barrel and the pin passing through it. When moving in the vertical plane of the barrel, the protrusion above the cartridge chamber enters and leaves the clutch with the window for ejection of spent cartridges, which allows for reliable locking of the barrel bore. It is noteworthy that many note the complete similarity of the automation system with the Glock pistol, forgetting that very, very many samples of pistols use the same system of locking the barrel bore. Works automatic gun as follows. Immediately before the shot, the bore of the weapon is closed, that is, the barrel and casing-bolt are in engagement with a projection above the chamber and a window for ejecting the spent cartridges. When fired, the powder gases press not only on the bullet, forcing it to move along the barrel, but also on the bottom of the liner, but given that the pressure is held for a fraction of a second by force, it is impossible to call it, but a short-term pulse is quite possible. This pulse sleeve transmits casing-bolt, which begins to move back, as well as the barrel of the weapon is engaged with him, then he begins to move. In the process of movement of the barrel and casing-bolt, the shaped cut under the breech begins to interact with the pin, and since the cut is made slightly obliquely, this interaction causes the breech bore to descend downwards, which removes the overhang from the clutch from the window to release the shot sleeves Thus, the shutter casing and the barrel are separated, the barrel is braked against the weapon frame, and the shutter casing continues to move backward, removing the cartridge case and cocking the pistol trigger. Having reached its extreme rear position, the shutter-casing stops and under the influence of the return spring begins to move forward, removing the new cartridge from the magazine and inserting it into the chamber. After the shutter casing rests against the breech breech, it begins to push it forward, which leads to the interaction of the figure cutout in the tide under the cartridge chamber and, as a result, raising the breech breech and its engagement with the window for ejection of spent cartridges, i.e. locking the barrel After that, the gun is again ready for the next shot. 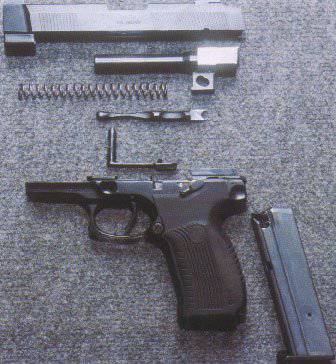 As you can see, in theory, everything is quite simple, and the scheme itself has long been worked out on many weapon models, so, in principle, there was nowhere to "mess up", but you need to understand that even with such a simple scheme of work, the weapon can be raw, and manifested in quite unpleasant moments until recently. First of all, it should be noted that there are quite frequent cases when the cartridge case did not leave the pistol, but it was tangled in the window to eject the cartridge case, stopping the shutter-casing. This trouble is not the biggest and easily enough disposable, but outside the shooting range such delays are unacceptable, as they can cost the life of the shooter. The main reason that the cartridge case was skewed could be called the low quality of the weapon, as well as not the highest quality of the ammunition themselves. At the moment, this problem has been eliminated, at least in the weapon itself, but the "sediment remained." The second problem was that the plastic frame of the weapon often did not withstand a large shot and burst. There is already a reason not in quality, but in the fact that previously only export and sports versions of weapons had a plastic frame, and the latter were weakened so that they could not use more powerful 9x19 cartridges, but only standard ones. Apparently, they have gone overboard with the weakening, and it is difficult to say how things are now with this, since this problem has “turned away” people from the national pistol for a long time. In my opinion, it was a very big mistake to launch a weapon to the masses before it was fully developed, as now the Yarygin pistol is very different in reliability compared to the first weapon variants, and this is confirmed by the reviews of those who just now encountered this weapons. Those who have tried the pistol from earlier releases have already added their opinion about the pistol of the POI as poor-quality and unreliable weapons, and even new ones, which are already much better in quality, cannot be overrun by their samples.

Of course, that without a negative moment in this gun has not done. You can still observe delays when shooting, if you use low-quality standard 9x19 cartridges, but with enhanced domestic weapons, they work without problems. Actually, you can even say that it was designed for more powerful ammunition weapons, and 9x19 with its standard characteristics is not the best option for Grach pistols. To everything else, you can add a sufficiently large width of the pistol, not the most successful standard sights, a long trigger stroke, and so on, that is, those things that you just need to get used to. Among the positive features of the weapon, first of all, it is necessary to note a full-fledged ammunition, which, however, is already beginning to get rid of its own, but here the domestic version of the 9x19 has a slight advantage over Western patron models adopted by the armies of other countries. the cartridge will be distributed in our army.