In the UV range, camouflage is useless. 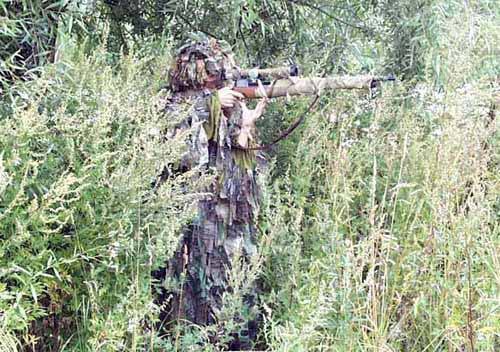 Modern camouflage is more than fabric, painted to the color of the area. Currently, the military must be masked in the infrared spectrum. But few know that there is another way to detect a soldier: using sensors that operate in the ultraviolet spectrum.

Compact infrared sensors are quite common in the armies of developed countries. However, their production requires complex technologies, and they cost from thousands to tens of thousands of dollars. Therefore, for example, US Army soldiers may not be afraid of the widespread use of thermal imagers among the Taliban. Nevertheless, American military uniforms are manufactured to provide stealth in the infrared range.

However, in the free market there are many devices that allow monitoring in the UV range. You can buy on the Internet for 100 dollars a video camera and simply remake it for shooting in real time in the near ultraviolet spectrum with a wavelength from 330 to 1250 nm. In such a cell, a soldier in camouflage will look like a bright blue spot that can be easily detected from a distance of at least 100 m.

Ultraviolet Intelligence is most effective in the Arctic, where UV rays are particularly bright. Also, the amount of ultraviolet radiation increases at dusk at dawn, on cloudy days and in such conditions, simple UV video cameras can sometimes be even more useful than thermal imagers.

The capabilities of ultraviolet sensors should be taken into account when disguising personnel, equipment and machinery. The near ultraviolet spectrum, primarily 320-400 nm, has an amazing ability to display the details of an object, even at a great distance. A modified digital SLR camera with a 400-mm lens can detect camouflaged soldiers at a distance of a kilometer. Using such UV cameras or camcorders, you can quickly explore a mountain valley from a height and cause fire on targets that consider themselves well disguised. The exact range of such surveillance devices is unknown for the simple reason that no one has ever seriously engaged in such measurements. However, scientists are currently using UV cameras to determine one part of sulfur oxide per million in volcanic plumes from a distance of 16 km.

The US Army recognizes the need for camouflage in the UV range. Guidance on the training of soldiers requires the adoption of measures to disguise them from UV sensors. In addition, the latest US Army Field Manual in the masking section (FM 20-3) noted that the threat of ultraviolet sensors is underestimated by military personnel because they rarely know about the capabilities of specific sensors or combinations of systems used by the enemy.

It is known that UV cameras pose a significant threat in snow-covered areas, since snow reflects UV rays better than most white paints and man-made objects. Photographic intelligence systems with simple UV filters can easily highlight military targets as dark spots on a snow-covered surface.

Few people know, but in dense foliage a UV camera is also a very useful tool. The fact is that green foliage absorbs ultraviolet light, reflecting only 7% percent of radiation, while most camouflage models reflect much more ultraviolet. Sand, depending on the content of silicon, reflects only about 3% of UV rays, while many tan and gray camouflage fabrics are up to 50% and more. For example, the famous Ghillie suit, which is used by American snipers, hides a soldier in visible light so that the enemy can literally step on the head of a sniper, but in the UV range, gilli is perfectly visible.

Why are UV cameras not used in summer and in places where there is no snow? The answer is simple: rich armies make extensive use of thermal imagers, and assorted terrorists and insurgents simply do not know about the possibilities of surveillance in the ultraviolet.

Be that as it may, the US Army drew attention to the potential vulnerability of its soldiers. In particular, the demand from the military has generated such simple solutions as spray produced by UVR Defense Tech. It is applied to the uniform to reduce reflectivity in the UV range.