October 12 2012
11
Russia has the longest maritime borders in the world - about 39 thousand kilometers. At the same time, our country has direct access to two oceans (the Arctic and Pacific), and there is also access to the Atlantic through the seas. Thus, Russia has the opportunity to take full advantage of all the advantages of sea freight and naval fleet. However, the large length of the coast, among other things, has not entirely positive sides. The longer the coastline, the greater the space for maneuver of the enemy’s amphibious assault and, as a result, greater forces are required to protect the coast from landing. The many years of experience of foreign countries clearly shows that amphibious assault operations are quite effective in order to launch successful offensives with them. In addition, all leading and developing countries have and / or are building a sufficient number of landing craft of various classes. In such circumstances, the coastal air defense becomes one of the most pressing issues. For Russia, this task is of particular importance in view of its geographical position and the length of the sea borders and coasts. 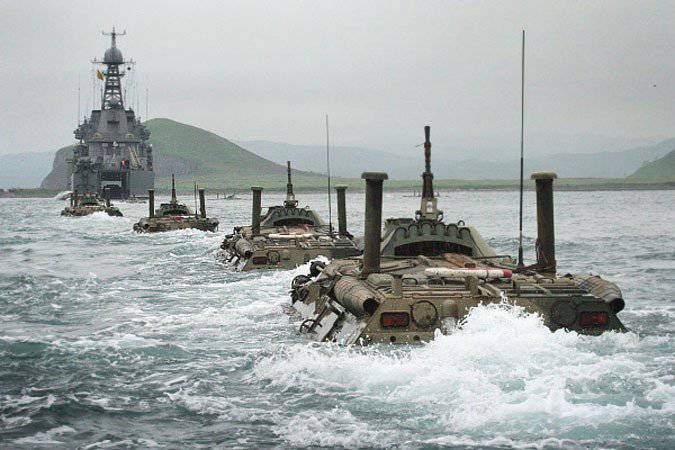 The organization of the coastal airborne defense is a rather difficult matter, having a number of characteristic features and snags. As their example, we can cite the peculiarities of the interaction of different types of armed forces and combat arms. Obviously, not only ground forces, but also aviation with the fleet. Thus, effective anti-airborne defense requires well-functioning communications between the types / types of forces / troops, which will ensure the timely transmission of information about the actions of the enemy and the possible development of the current situation. In addition, in some situations, not only the correct interaction of the types and types of troops is required, but also the relationship between units belonging to various state organizations. The fact is that, starting from the first years of the existence of the Soviet Union, the Border Troops belonged to the Cheka, the NKVD and the KGB. Now they are a structural unit of the Federal Security Service. The armed forces themselves, in turn, belong to the Ministry of Defense, which requires additional ties between the Ministry and the Federal Service.

Another specific problem of the interaction of troops is the question of personnel. The military personnel involved in the coordination of actions must know the features of both topographic, and aeronautical, and nautical charts, which, for a number of reasons, vary greatly. Thus, the officer corps must take a special training course to participate in the organization of antiamphibious defense, without which it will not be able to work with due efficiency. It should be said that the training of officers for such work is quite a long process. At the same time, if the junior officers providing interaction can simply study a number of relevant manuals, practice card design, etc., then for commanders with higher ranks who, in the case of disembarkation, will lead the defense, long training with tactics is required antiamphibious defense, as well as the organization of the interaction of various types / types of forces / troops.

As a matter of fact, the question of the interaction of units concerns not only different types of troops. Properly organized landing operation may be sudden, so the defending troops may simply not have time to fully prepare for it. Accordingly, it is required to minimize the timing of information transfer between departments, as well as accelerate planning. With planning everything is clear - you need good command, preferably with a lot of experience in this kind of work, even if it was gained during the exercise. But the acceleration of the transfer of information requires a different approach relating to technical equipment. The most promising methods for solving this problem are integrated communication and control systems. At present, the military is focusing on creating unified communications systems within the same type of armed forces. In other words, the navy, ground forces and the air force must have their own integrated system. However, in this case, the question remains open of the interaction of the fleet with the ground forces, the ground forces with the air forces and aviation with the fleet. Thus, the creation of additional systems for the interaction of two or more integrated systems of the types of troops or the development and implementation of a common complex of data transmission and control, which will be the same for all armed forces, is still required. However, such a solution to the problem will take a lot of time and “eat” a huge amount of money. However, with the latest trends in the development of the armed forces around the world, these sacrifices look quite normal and worth the end result.

So, with the global issues of providing anti-landing defense in general, everything is clear. Now we need to consider the practical side of the matter, directly related to the protection of the coast. Amphibious assault forces can be landed on almost any shore that meets certain requirements. These requirements are quite mild, so in most cases the choice of a specific landing site depends more on the idea of ​​the attacking side’s command and weather conditions than on the coast topography. For defending troops, this fact has not quite pleasant consequences: the defense needs to be built on a fairly long territory, which entails the need to transfer a large number of personnel, weapons and equipment, the complex preparation of a significant number of positions, etc. In practice, this can result in the organization of defense on the basis of strong points. And in the conditions of the coast of some seas, first of all, the northern ones, this threatens with the appearance of “holes” with a width of at least several tens of kilometers, which, among other things, may not even be controlled by radar or aerial reconnaissance. As a result, defending troops must have good mobility and be equipped with the most modern equipment and weapons. In addition, a good initial positioning of positions on the coast will be a good help. In the latter case, everything else is added intelligence, which by all types (space, sea, air) and means (RR, RTR) must in time detect the movement of enemy assault vehicles and reveal its plans.

And yet, even the timely detection of enemy landing ships at a sufficient distance from its own shores may not have the desired effect on the course of the entire defense. For the transfer of troops and their deployment takes time, so the plans of the enemy must be known no later than the departure of landing ships from the port. Otherwise, even the most competent defense organization risks not achieving the expected effect due to the banal lack of time for full training. Thus, additional sources of information are needed, from reconnaissance satellites to agents in relevant circles in a country that may become an adversary.

Summing up, we can say the following: in ensuring the safety of sea coasts, Russia still needs to do a lot of various technical and organizational things. All this will not be easy and fast, but the security of the shores of the country is worth it. Of course, nowadays no country shows signs of preparation for a conflict with Russia, but the construction of a full-fledged antiamphibious defense system will take quite a long time. Over the years, the geopolitical situation can significantly change and there may be people willing to attack us.