Behind the scenes of testing the IL-76MD-90A

October 8 2012
46
So, it happened. New military transport aircraft IL-76MD-90А after several years of development and construction took off for the first time. A few days after that, a contract was signed at the Ulyanovsk Aviastar-SP Aviation Plant for the supply of new air "truck" to the Russian armed forces 39. This agreement will have positive consequences for the customer and for the manufacturer. In the future, the Ministry of Defense will probably additionally order some more new aircraft of this model.

Among other things, the events of recent days are interesting in that the contract signed in Ulyanovsk, according to some media outlets, was almost impossible. The fact is that in the last days of August, the Izvestia newspaper published a note in which the words of a certain source in the military department were quoted. The anonymous author told the newspaper about the non-compliance of the Il-76MD-90A with military requirements. According to this source, at present the prototype of the new transporter does not have a number of special equipment necessary for operation in the military transport aviation: these are electronic warfare systems, weapons, special avionics, etc. Therefore, the source concluded, the IL-76MD-90A is unsuitable for use in the air force.

Nevertheless, despite the words of an anonymous source allegedly from the Ministry of Defense, the contract was signed and the new planes will go to the troops. Officials did not comment on the publication in Izvestia, but from the position of the military department, namely from the concluded contract, it follows that the aircraft of the customer are satisfied. Perhaps with certain reservations. If the version voiced by an anonymous source has something to do with reality, then most likely the special equipment has not yet been installed on the prototype plane and its place is taken by weight and size simulators. In addition, according to unconfirmed information, EW systems designed specifically for IL-76MD-90А will be ready only in the next 2013 year. So, the conclusions about the unsuitability of the aircraft turned out to be at least greatly exaggerated.

And yet the greatest interest in the project of deep modernization of IL-76 is its история and prerequisites for creation. In the middle of the last decade, the leadership of the air force faced a specific problem: the existing military transport planes become obsolete, and the purchase of new ones is associated with a number of difficulties. The fact is that before the production of IL-76 transport workers was carried out at the Tashkent Aviation Production Association (TAPO), which after the collapse of the USSR became the property of another state. Despite the latter fact, the Ilyushin company continued to work with the Tashkent aircraft factory and create new aircraft modifications, however, such cooperation had certain disadvantages. First of all, the development company was not satisfied with the state of TAPO. For the production of a large number of aircraft needed to significantly upgrade the plant equipment. But de facto it turned out to be impossible: Uzbekistan could not “pull” modernization of production alone, and Russia did not want to invest in a foreign enterprise, even with a positive return for itself.

It is worth noting that the Russian side several times attempted to increase its influence on the TAPO. So, in 2007, a document was signed, according to which the Tashkent Aviation Production Association in the future was to become part of the Russian United Aircraft Building Corporation. The case seemed to go successfully, but less than a year after the signing of the first agreements, Uzbekistan refused to continue the transfer of the enterprise. After these events, Russia continued the work begun in 2006 — the complete transfer of the production of Il-76 aircraft from Tashkent to Ulyanovsk. Further development of the situation with the IL-76 was ambiguous. On the one hand, the Ulyanovsk plant really coped with the production of another type of aircraft. But on the other hand, TAPO, left without new orders, suffers losses and has debts of several tens of millions of dollars. In other words, not entirely rational actions by the leadership of a friendly republic led to the fact that a foreign aircraft factory had already received a large order and in the future could add other contracts to it, and another enterprise (and its own, which should be twice as sad) - on the verge of closing . 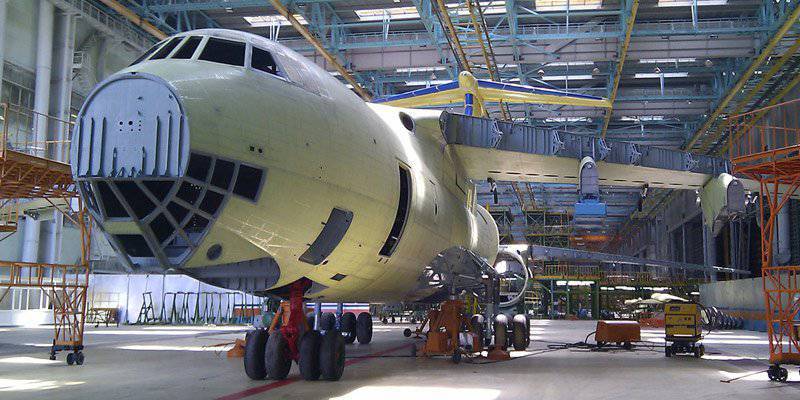 Consider what the order for the Il-76MD-90А aircraft is useful for the Aviastar-SP Ulyanovsk plant. According to the head of the presidential administration of Russia S. Ivanov, the contract for the construction of 39 new transport workers will provide the plant with work up to 2018. In addition, Ulyanovsk aircraft manufacturers assemble Tu-204 aircraft. Due to two models of Aviastar-SP aircraft, in the coming years it will have such a load that it did not have since the collapse of the Soviet Union. It is worth noting that almost four dozen cars are most likely only the first part of the total order. IL-76MD-90А was developed with a long-term perspective, and after the delivery of the last aircraft in the 2018-19 years we should expect new contracts. The total volume of IL-76МД-90А orders, and in the more distant future, new IL-76 modifications can be represented based on the number of the current fleet of these vehicles. The Russian air force currently operates more than two hundred aircraft of this family. In addition, a certain amount of IL-76MD-90A can be ordered by the Ministry of Emergency Situations.

It is not difficult to imagine what economic and social consequences a contract will have. Under the contract for the supply of 39 aircraft, the Ulyanovsk Aviastar-SP plant will receive about 140 billion rubles. It is quite obvious how useful such a contract will be and how the standard of living of the company's employees will change. In addition, the contract signed by 4 in October is the most “ponderous” agreement for the supply of aircraft in the history of the new Russia. Over the past twenty years, never military or civilian state organizations have spent such huge sums on purchases of new aircraft.

However, the success of the IL-76MD-90A is overshadowed by some unpleasant things. First, at present, the purchase of these transport workers is significantly more expensive than upgrading the aircraft to the level of IL-76MDM. Secondly, the deadline for the delivery of the first production machines may move due to possible problems with fine-tuning the EW equipment and other special equipment. Finally, the tests began quite recently and it is still impossible to say how much their course would correspond to the plan, especially since the first flight of the IL-76MD-90А was initially going to take place almost a year ago. Hopefully, the entire “limit on delays” has already been chosen and in the future the program of testing and building new transport airplanes will be carried out in strict accordance with the plan.