October 5 2012
14
The past few weeks have been particularly rich in news regarding two ships of the same class and similar origin. News from China came about the commissioning of the PLA naval forces of the new aircraft carrier Liaoning, and some troubles were reported from the Barents Sea during the tests of the Indian ship Vikramaditya. The two ships have a lot in common. Projects of both aircraft carriers were developed in the Soviet Union and to a certain extent are related to each other. For example, Vikramaditya belongs to the 1143.4 project, and Liaoning belongs to the 1143.6 project. In addition, both ships in the early nineties experienced a series of unpleasant events that ultimately predetermined their fate. The future “Liaoning”, which bore the name “Varyag” then, was sold to the latter under the agreement of Ukraine and China, and the Russian “Admiral Gorshkov”, being ready for service, went over to India after the modernization. 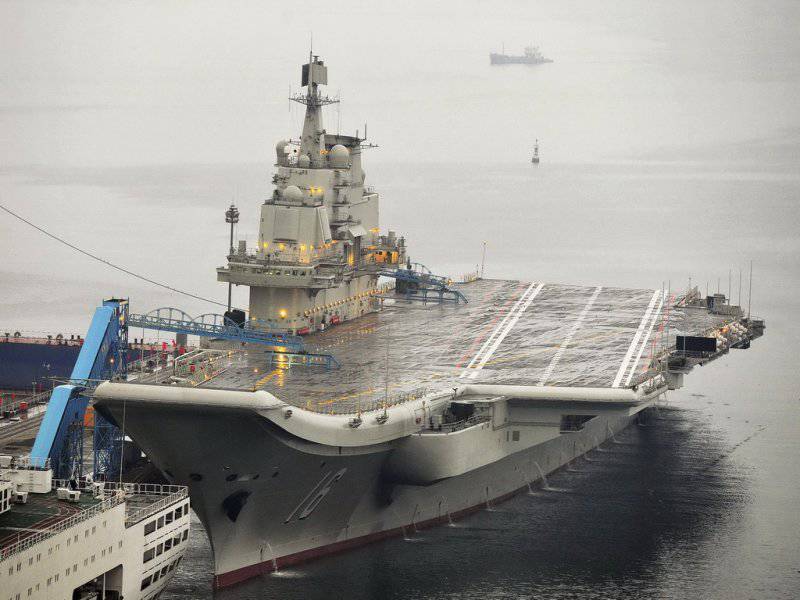 On this path the ships parted and all coincidences mainly concerned difficulties with the implementation of the plans of the new owners. "Varyag", according to initial statements, was to become the basis for a floating floating entertainment center. However, a purchase worth about twenty million dollars for a long time could not fall into the hands of the addressee. The fact is that during the towing of the ship from the Black Sea to the Chinese shores, Turkey intervened in the matter, who refused to let even the unfinished, but the aircraft carrier through the Bosphorus Strait. Nevertheless, the issue was resolved, although it took almost a year and a half. A few years later, the future "entertainment center" was under repair at a shipyard in China. But, as it turned out, the initial statements about the purpose of the purchased ship did not correspond to the actual state of affairs. By the middle of the last decade, it became clear that Beijing does not intend to give up the unfinished warship to the needs of idle people, but will complete the construction precisely with the aim of using a swimming facility in the military navy.

Since then, several years have passed and a number of events have occurred. Among other things, it is worth noting the difficult path of China to its own carrier-based fighter. According to reports, at the earliest stages of the development of a new aircraft, Beijing planned only to use the experience gained from abroad, but to make the bulk of the constructive aspects on its own. However, in the late nineties, just at the time when negotiations with Ukraine were underway on the subject of selling "Varyag", all these ideas were discarded. Official representatives of the Chinese administration asked Russia to sell a number of Su-33 fighters. During the negotiations, the number of required aircraft was reduced to several units, after which the Russian side refused to supply. This decision was motivated by the reluctance to give China equipment in the amount in which it is clearly not capable of being used for military purposes, but can serve as material for reverse engineering. A little later, it became known that Ukraine, together with the aircraft carrier, sold one of the prototypes of the Su-33 to China - the T-10K aircraft. In 2010, China announced the completion of design work on its own carrier-based fighter Shenyang J-15, emphasizing that it is not a copy of the Soviet / Russian machine, but was a further development of the fighter Shenyang J-11. The piquancy of the situation adds the fact that the aforementioned J-11 is essentially a copy of the Soviet Su-27.

As of early October 2012, China's aircraft carrier program is as follows. The only ship capable of carrying aircraft was recently commissioned by the PLA Navy, some minor modifications to its equipment are ongoing, and the new carrier-based fighter is only being tested. At first glance, nothing special, especially for a country that previously did not have aircraft carriers. At the same time, the situation is ambiguous. The commissioned Liaoning, as the fleet command claims, is only a training ship. But here a fair question arises: who and what will be taught on it? The aircraft carrier has a number of characteristic features that distinguish it from other warships. However, in the case of Liaoning, almost all of these features cannot be used; at least for now. First of all, it should be noted the absence of a deck fighter. After improvements and modernization, the former Varyag lost missile launchers for anti-ship missiles. Thus, if we take the armament of the ship, then the sailors have to learn to use only anti-aircraft missiles and guns, as well as anti-submarine bombers. Obviously, sailors can take similar training on other ships. The last “point” of training that can be discussed concerns the training of personnel in the operation of special systems designed for aviation. However, the composition of the Liaoning equipment is such that the use of this equipment, as well as training in using it, is practically impossible without airplanes and pilots. So all training can be reduced to the maintenance of installed equipment and training alarms. The same applies to the part of the crew that is responsible for the actions of the aviation group.

Arguing on the topic of an aircraft carrier without airplanes can come to several questions and conclusions. Among other things, such a question is often asked: if “Liaoning” is not yet ready for full-fledged operation, even if it’s a training one, why were they in such a hurry to put it into operation? One of the answers to this question is the version relating to the competition of the leading countries of the Asian region. Simultaneously with the completion and reworking of the Varyag to another shipyard (the Russian plant Sevmash), there was a restructuring of another ship of the same class — the aircraft carrier Admiral Gorshkov, which after all the changes received the new name Vikramaditya. The situation with the Indian ship is much easier than with the Chinese. At least for the reason that carrier-based aircraft and helicopters for the Indian aircraft carrier already exist and are mass-produced. Moreover, information appeared that said that if necessary, almost any aircraft with a take-off weight of up to 25 tons would be able to get on board the Vikramadity without any special training. If this is true, then, if desired, the Indian command will be able to replace the Russian MiG-29K fighter jets with other aircraft of the same weight category. Naturally, I would like such contracts, if they are, to go to Russian aircraft manufacturers. 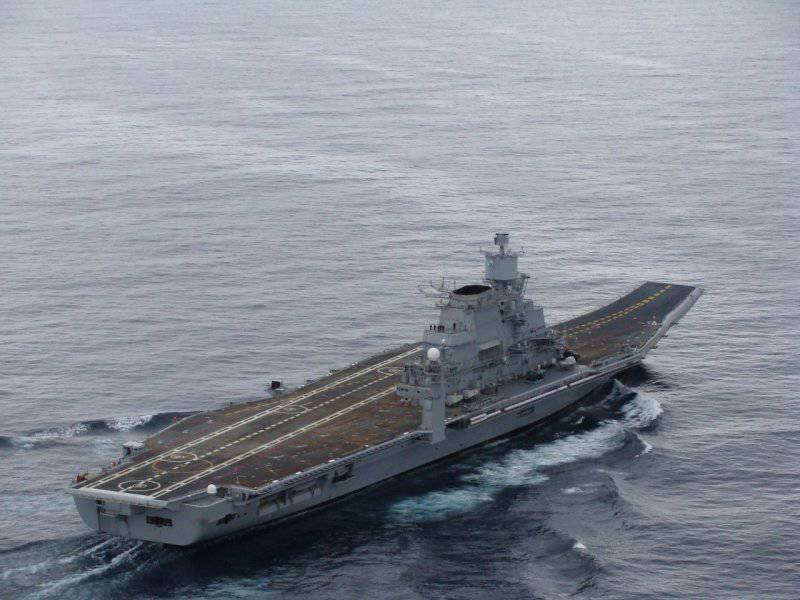 Admittedly, the aircraft carrier "Vikramaditya" could not do without problems. A couple of weeks ago there was news about him, which caused heated discussions. Media reported that during the sea trials there was a breakdown of the power plant of the ship. An anonymous source at Rosoboronexport told reporters about the nature of the problem. According to him, because of the problems with thermal insulation, seven out of eight existing steam boilers failed, due to which the ship had to be towed to the port for long repairs. This unpleasant news spread through the media and personal blogs, overgrown with new and new details. However, at the very beginning of October-month, information appeared “from the other side”. The blog of the Center for Analysis of Strategies and Technologies published information received from the Indian press. Among other things, it is mentioned and история with boilers. As it turned out, firstly, not seven were damaged, but only three out of eight boilers. Secondly, they are not completely out of order. The loss of 5-10% thermal insulating brickwork first forced the sailors to limit the ship's total power installation to 70% from the maximum, and then to 50%. In such a mode of operation, boilers “Vikramaditya” not only kept the course, but was able to accelerate to 22 nodes - the speed at which it is already allowed to take off and land. The maximum speed reached by the ship on trial before the incident with bricks, reached the 27,8 node, which is slightly less than the estimated. Currently, issues related to the restoration of full operation of the power plant of the aircraft carrier are being settled. Most likely, asbestos materials traditional for Russian shipbuilding will be used with the bricks during repairs.

The situation with poor-quality thermal insulation is already the subject of litigation by the relevant organizations, and we will probably soon find out what really happened there. In the meantime, Vikramaditya will undergo additional repairs and prepare to march to its new service station - the port of Mumbai. Terms of delivery of the ship to the customer is not too clear. It is believed that the aircraft carrier will go to India no earlier than next spring. As proof of this version, the following calculation is given: if the repair of the boiler lining starts right now, it will be completed at least by the beginning of winter or even later, and by that time the ice situation will not allow us to go camping. So in less than a year, most likely next summer, the Vikramaditya will become the flagship of the Indian Navy. Moreover, unlike the Chinese brother, it will be a full-fledged warship with an aviation group on board.

In general, an interesting situation has developed with the Chinese and Indian aircraft carriers. One of them has already started the service, but so far he cannot fully perform even the training tasks. The second, by contrast, may soon be commissioned by the Indian Navy, but requires repair of the power plant and some small “strokes”. These facts can cause a variety of thoughts, including rather ambiguous. For example, why is China already operating an aircraft carrier, and airplanes are still not ready? It is difficult to resist the answer associated with the new arms race going to Asia. Of course, China’s adoption of its first aircraft carrier should raise the country's prestige. Naturally, if not spread about the absence of aircraft for him. The question of state prestige can be transferred to India, with the difference that there were already two aircraft carriers in its navy. The first of these, the English-made Wikrant, has been 15 for years as being withdrawn from the fleet and serves as a floating museum, while the second, called the Viraat (also built by the English), is waiting for the arrival of Vikramadity, after which it will be written off. It is worth noting that in addition to the two new aircraft carriers, China and India also plan to build ships of this class. Thus, at the shipyard of the Indian city of Kochchi, the aircraft carrier Vinkrant is being built from 2006 on the basis of a joint Russian-Indian project, which is planned to be launched shortly after the adoption of the Vikramadity. India’s further plans for the construction of an aircraft carrier fleet have not yet been announced. China, in turn, is also going to expand the fleet of aircraft carriers and, according to the old tradition, does not specifically cover the details of this expansion.

Anyway, the emergence in the Asian region of two new large warships once again will be the occasion for news, reasoning and controversy. In the meantime, some are experiencing airplanes, others are repairing insulation and preparing for the delivery of a new combat ship. True, there is also a third party - this is Russia. With the help of a contract with India, our shipbuilders intend to restore the lost skills necessary for the construction of aircraft carriers. If we recall the recent statements of the political and military leadership of the country about the start of a new aircraft carrier project, such skills and technologies will not be superfluous.