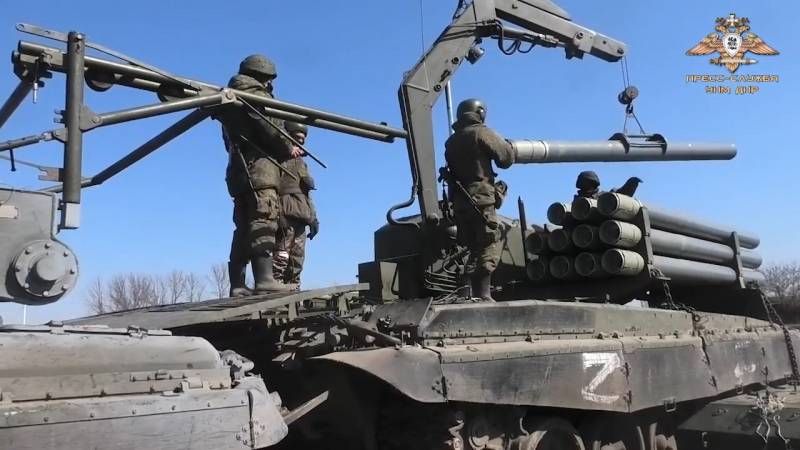 The process of loading ammunition on a combat vehicle

The other day it became known that heavy flamethrower systems TOS-1A Solntsepek were involved in the Special Military Operation. This technique is used to defeat enemy positions and various objects over large areas. TOS-1A is distinguished by its high performance and special combat capabilities, and therefore its appearance actually predetermines the outcome of the battle.

On March 20, the People's Militia of the DPR published a video showing the combat work of the Russian "Solntsepeka" near the city of Mariupol. It demonstrated the process of loading the launcher and the subsequent advancement of the system to the firing position.

Then they showed the firing of rockets. For greater entertainment, it was filmed from several angles. The results of this combat use are obvious, but not completely clear - instead of the affected objects of the nationalists, only clouds of smoke were shown. 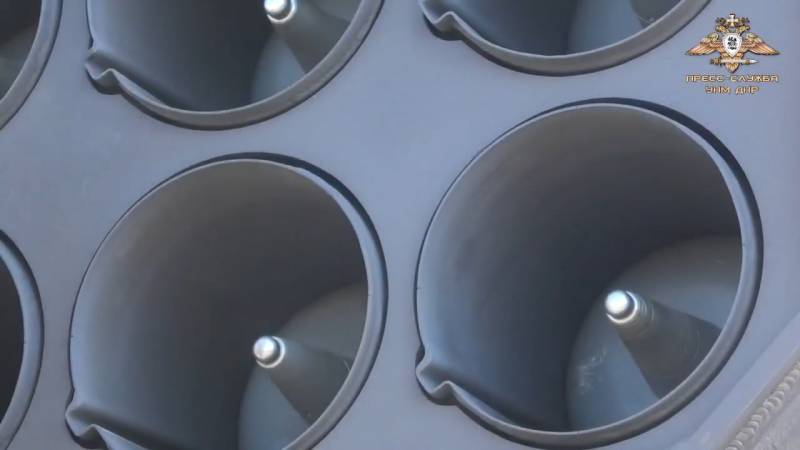 Shells in barrels
Also in recent days, other short videos with Russian "Solntsepeks" have appeared in various sources. The spectacular shooting process and the flight of rockets are demonstrated. For obvious reasons, operators cannot reach the affected targets, and the results of the application do not fall into the frame.

However, soon a similar video appeared. A UAV footage is published on specialized resources, presumably showing the attack of the Solntsepeka on the positions of nationalists at the Azovstal plant. It turned out to be a very interesting video demonstrating the potential of Russian weapons - and their particular danger to the enemy, even trying to hide in various buildings.

A drone filmed how rockets fly up to the workshops converted into defensive positions. They easily break through the roof and explode inside. Flashes from explosions fill the entire space of the building, after which a cloud of smoke and dust rises into the air. The main structures of the workshops after such an impact remain intact, no noticeable damage is observed. However, it is obvious that the improvised military infrastructure, manpower and weapons inside them have been completely destroyed. 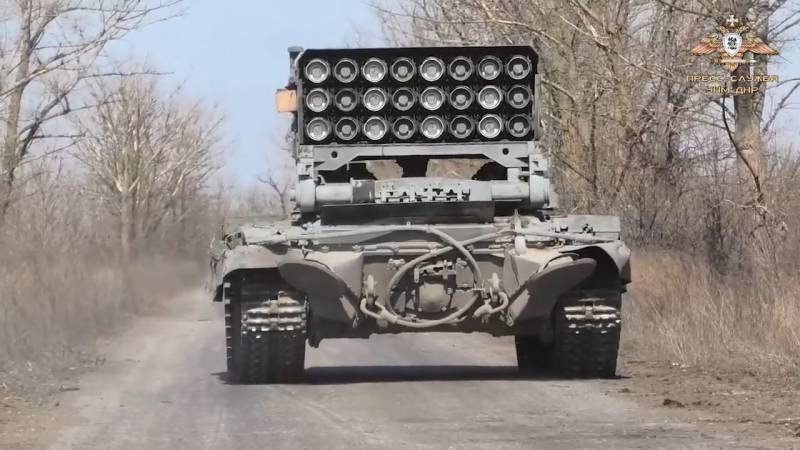 Apparently, the combat use of TOS-1A will continue. Some fortified areas and other similar complexes and objects still remain at the disposal of the enemy. All types of artillery can be used to destroy them, incl. reactive systems with special ammunition. Practice has already confirmed their high firepower and effectiveness.

TOS-1A is actually a specialized multiple launch rocket system. It differs from other domestic MLRS with a special ammunition - it is an unguided rocket with a volumetric detonating or incendiary warhead. It is a heavy missile with such equipment that determines the combat qualities and capabilities of the flamethrower system.

The product TOS-1A "Sun" was developed at the beginning of the 1s on the basis of the serial system TOS-XNUMX "Pinocchio". A number of small but important improvements were made to the original design, determined by the results of its operation. Subsequently, it was reported on the development of a new ammunition and other ways to improve overall performance. 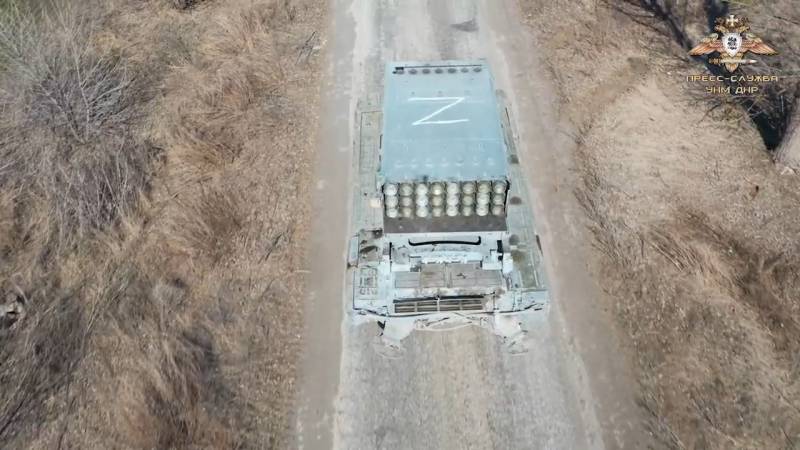 The self-propelled launcher and the transport-loading vehicle from the "Solntsepeka" are made on the chassis of the main tank T-72. Saved regular anti-projectile armor and additional protection. At the same time, the fighting compartment of the tank with the turret is replaced by new units. On a combat vehicle, this is a movable base with a launcher, and on the TZM, mounts for ammunition with armor casings and a crane are used.

The TOS-1A combat vehicle carries a launcher with a package of 24 guides. Compared to the base model, their number was reduced, but due to this, armor protection was enhanced. The launcher is controlled by a specially designed fire control system. It includes a set of sensors, a laser rangefinder and a ballistic computer. Due to this, the maximum possible accuracy of fire is ensured over the entire working range of ranges. Preparation for firing is carried out using remote control systems. 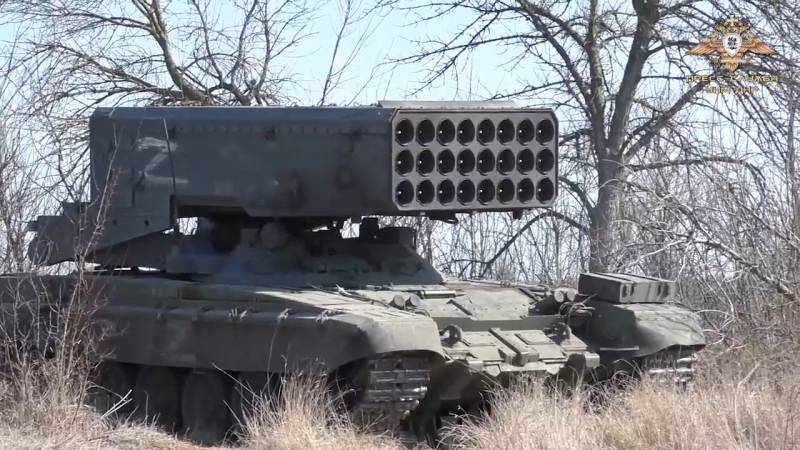 TOS-1A uses unguided 220-mm solid propellant rockets of the MO.1.01.04 series. Various modifications are equipped with warheads of a volumetric explosion or incendiary action. The first versions of the missiles made it possible to fire at a distance of up to 3,6 km. Later, improved modifications were developed with a range of 6 km. The area of ​​​​continuous destruction with a full salvo of 24 shells is up to 35-40 thousand square meters.

The mass of the combat vehicle is 46 tons. In terms of mobility and protection, it does not differ from the serial T-72. Management is carried out by a crew of three people. TZM "Solntsepeka" is several tons lighter and has the same running characteristics. It carries an additional ammunition load of 24 missiles. A crew of three spends no more than 15 minutes on the transfer of ammunition.

TOS-1A is actually a multiple launch rocket system, but bears little resemblance to Grad or Smerch. Due to a number of characteristic features and features, special combat capabilities are achieved, incl. giving advantages over traditional MLRS. 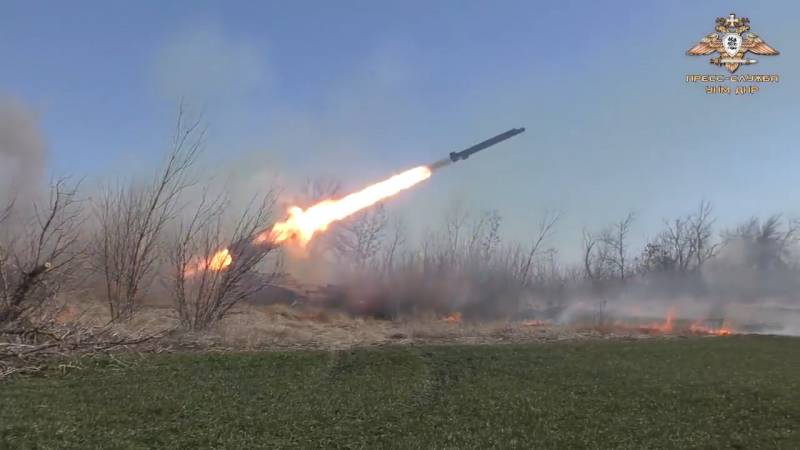 Launch a pair of rockets
A characteristic feature of "Pinocchio" and "Solntsepeka" is a tank chassis with anti-cannon armor. Initially, this was a forced measure due to the limited range of a heavy projectile. However, due to this, TOC-1(A) can operate at or near the leading edge. With the advent of new extended-range projectiles, protection has not lost its importance.

"Solntsepek" is equipped with a developed and efficient fire control system. It monitors a number of important parameters and calculates shooting data with high accuracy. The result is improved hit accuracy and minimal dispersion. The deviation from the aiming point may not exceed a few meters.

Traditional MLRS mainly use high-explosive fragmentation warheads. Articles of series MO.1.01.04 are equipped with volumetric detonating charge of large mass. The thermobaric principle of destruction makes it possible to more effectively destroy manpower, equipment and buildings both in open areas and in shelters. Such a warhead has advantages in the radius of continuous damage, and also better destroys various structures and causes damage to those inside. In addition, large areas are affected, both by a single projectile and by a full salvo. 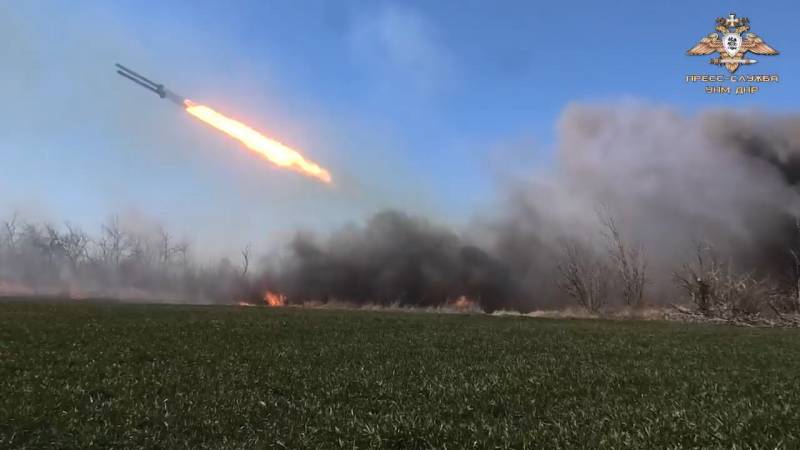 However, there are also objective limitations. So, due to the limited firing range, TOS-1 (A) is forced to work directly at the forefront. It potentially falls into the zone of destruction of enemy artillery or missile systems. Volumetric detonating ammunition has limited capabilities to combat armored vehicles. At the same time, the choice of missiles for the Solntsepeka is small, which reduces the flexibility of its possible use.

However, competent strike planning, use of cover, etc. allow to offset the effect of negative factors. In addition, "Solntsepek" can be supplemented with other multiple launch rocket systems with the necessary functions and qualities. In this case, all planned goals will be achieved with minimal restrictions.

Domestic heavy flamethrower systems are not used for the first time in real operations. So, the first cases of the use of "Pinocchio" took place in Afghanistan in the late eighties. In the future, this technique was repeatedly used in local conflicts, both by the Russian army and by foreign operators. In all cases, high efficiency was demonstrated.

Now TOS-1A are involved in the Special Military Operation. They are entrusted with the task of destroying the enemy and his positions at a distance from civilian infrastructure. The high accuracy and power of the munitions make this job easier – and understandably speed up the process of Ukraine's demilitarization.