March 18 2022
143
Su-34 is a kind of aircraft. The fact that he works from dawn to dusk as part of a special operation in Ukraine, I personally hear, despite all the soundproofing, because the Voronezh airfield "Baltimore" is one and a half kilometers in a straight line. 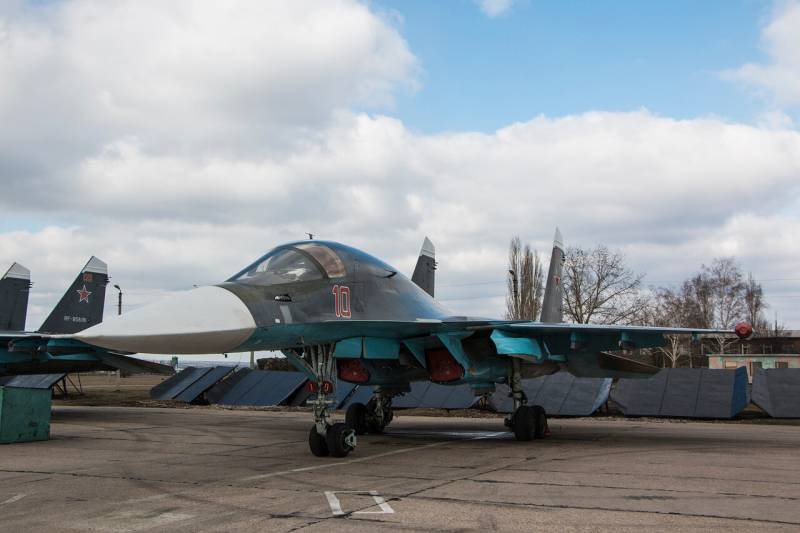 I would like to start this material with losses. The Su-34 is such an aircraft, which is just as honorable to shoot down as the Su-35S, which we have already talked about. That is why Ukrainians shoot them down in packs in the information space. Kharkiv, Melitopol, Volnovakha, Chernihiv…

With the evidence base somehow not very, I note. No, of course, the wreckage of the plane, piled in a heap, is a confirmation. And the star, and the tricolor coloring of the keel ...

But how ukroSMI work today, everything needs to be checked there 33 times, because they are still wizards. Give them free rein, they will sentence the entire 47th Bomber Regiment. And they all fly...

And "interviews" with the "downed" pilots, and "press conferences" also somehow do not cause bouts of pessimism. The staging is more than rooftop. So it’s hard to say where the truth is, because some (Russians) are simply silent, like dumb ones, the second (Ukrainian) mold so many fakes that it’s sometimes very difficult to determine where the truth is and where it isn’t.

There are currently no confirmed Su-34 losses by the RF Ministry of Defense.

Quite a lot has been written about the Su-34 both in terms of performance characteristics and in terms of assessing capabilities. The aircraft seems to be of the “4 ++” generation, but from my personal point of view, all these “pluses” are for managers selling military equipment to other countries, since theoretically I can influence prices.

In fact, the Su-34 is a front-line bomber that is able not only to repel the attack of almost any modern fighter, but also significantly complicate its further existence. We can say that the Su-34 is a classic fighter-bomber, a versatile aircraft capable of solving various tasks. 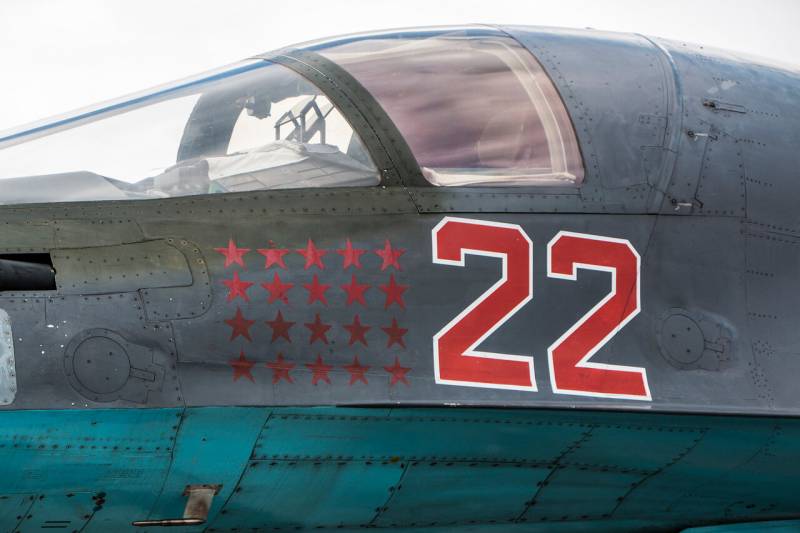 Unlike two-seater colleagues in the class (F-15E and Tornado), the Su-34 has an in-line arrangement of crew members in the cockpit. There is a feature in this. The cabin is fundamentally arranged differently. The entrance to it is not through a reclining lantern, but through a hatch, which is located behind the landing gear and a door (!) At the rear of the cab.

Because of this, the nose of the aircraft acquired a characteristic flattened shape, with sharp side edges, turning into influxes in front of the front horizontal tail.

Well, the nickname "duckling" is from here. 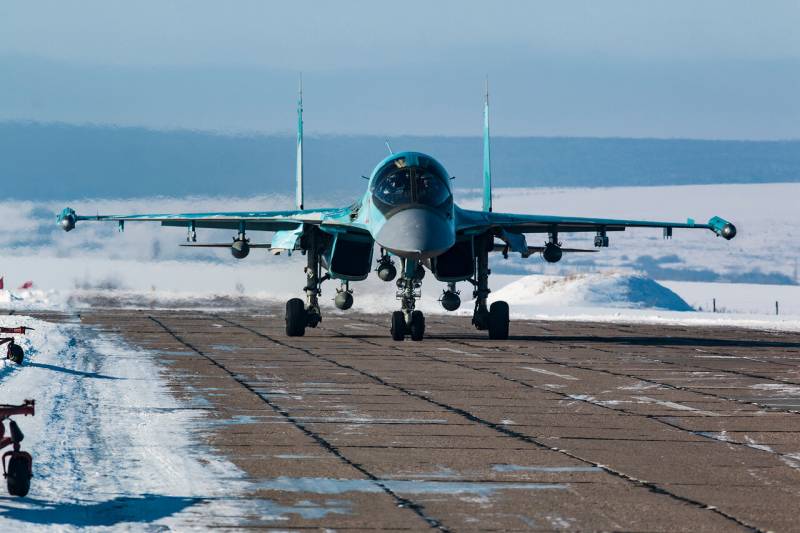 The cabin itself, one might say, is huge. Crew members have the opportunity not only to take a vertical position during the flight and warm up, but also to cook food or perform physiological actions in the compartment behind the pilots' seats. In general, in the case of a long-range flight, the crew of the Su-34 feels much more comfortable than the crews of other aircraft. And if you wish, you can even lie down in the compartment in full growth.

Naturally, there is a serious air conditioning system on board and maintaining pressure up to an altitude of 10 meters at a level of 000 meters.

The cabin was armored with titanium armor, at the same time it protected the consumable fuel tank and engines. The total weight of the armor was 1480 kg. For comparison, the latest modifications of the Su-25 have a total weight of armored elements of 1100 kg.

The air intakes were made unregulated, since the aircraft needed the maximum speed not at altitudes above 10 thousand meters, but much lower. For the sake of extracting maximum speed closer to the surface of the earth, engines and engine nacelles were redesigned.

The use of titanium and composite materials, coupled with the rejection of the mechanism for changing the sweep angle of the wing, facilitated the design of the aircraft and made it possible to compensate for the armor and increase the number of weapons carried, while maintaining the excellent flight characteristics of the prototypes.

But armor and engines are not the most important thing in aircraft design today. Electronics on board plays a very important role both in flight and in the use of weapons. 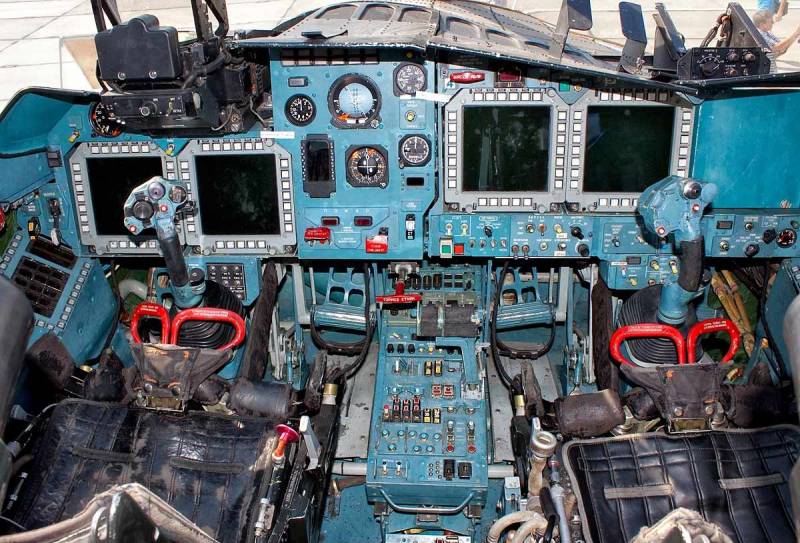 The Su-34 was equipped with a digital control system, an active safety system, and a system for dampening longitudinal oscillations of the aircraft during flights in turbulent conditions. The active safety system had modes for spinning out of a spin and bringing it to the horizon, and made it possible to perform aerobatic maneuvers at low altitudes and supersonic speeds.

The flight control system, which uses elements of artificial intelligence, controls not only the state of on-board systems, but also the physical condition of the crew. In addition, this system allows you to automatically return to the airfield and make a landing approach in the event of a crew failure.

For combat work, the Su-34 has two target detection systems: television and infrared. The systems can be used both separately and together, if the conditions of use depend on the weather or time of day in terms of lighting.

The airborne radar is multi-mode, with a phased antenna array, detects air targets at a distance of 200-250 km. Can detect small ground targets. The second rear-view radar is capable of not only detecting enemy attacks from the rear hemisphere, but also directing air-to-air missiles.

Plus, the installation of containers with the Khibiny electronic warfare system at the wingtips significantly increases the survivability of the aircraft in combat conditions. 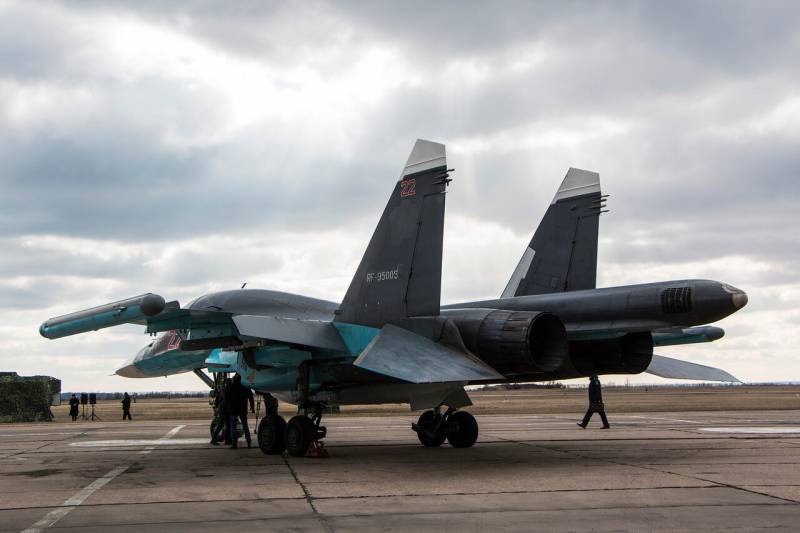 A quite fair question may arise: are the losses of the Su-34 possible?

The answer is complex and simple at the same time.

The main thing is that we are completely unaware of what and under what conditions the Su-34s were shot down. There is no clear information about the first at all, except for pictures of debris on the ground. The defeat of the second aircraft was recorded on the ground using a telephone. That is, in fact, the plane was caught at a low altitude and fired with the same Stinger. 1-2 seconds of rocket flight - no warning system can cope. It is possible that the situation was exactly the same in the first case.

The actions in Ukraine are very different from the actions in Syria, where the Su-34s could operate from a high altitude, outside the actions of the same Stingers. And, as you know, the terrorists simply did not have long-range air defense systems.

The Armed Forces of Ukraine still have at their disposal a certain number of S-300s and Buk, which are quite effective air defense systems. Here the main role is played by a short distance, which does not give time to work out the aircraft's defense systems or to maneuver the crew. The same "Stinger" flies to a maximum range of some 6 seconds.

In principle, the Su-34 in Ukrainian conditions is simply obliged to work from heights at which MANPADS cannot reach it. In the end, there are not so many decent medium and long-range air defense systems left at the disposal of the Armed Forces of Ukraine. But there are a lot of Stingers. And the chances of catching a plane at a low altitude, it turns out, are enough.

Of course, what happened in reality, if we find out, we will find out much later. But I express the hope that it will nevertheless become known, as with Tvardovsky, they will find “who shot where they hit” and will be awarded accordingly. For 15-20 years. 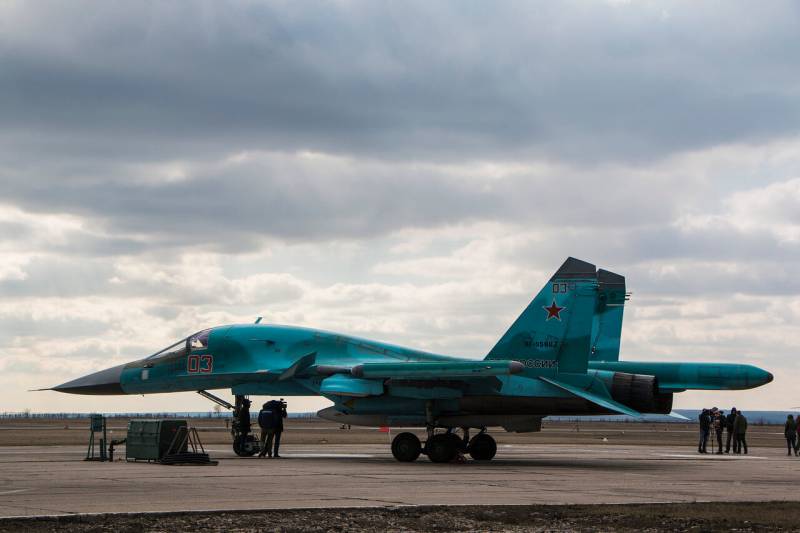 12 suspension units under the fuselage, engine nacelles and wings, allow you to hang up to 8 kg of various weapons.

Very often in reports from Ukraine we hear that it was with the Su-34 that high-precision weapon. By the way, this is quite correct and logical. The navigator-bombardier is able to provide accurate targeting of ammunition without distracting the pilot from piloting. In this regard, only the Su-34 of ours can compete with the Su-30, but the "thirtieth" pure water heavy fighter, which also carries half as much weapons.

In Ukrainian conditions, there is no point in using heavy attack aircraft of the Tu-22M3 type until ALL Ukrainian air defense systems are destroyed. It will be difficult to get away from the Tu-22M missiles, the aircraft is larger and less maneuverable than a front-line bomber.

So it is on the Su-34 that all the training of targets with high-precision weapons from the air falls.

To do this, the “duckling” has X-59M tactical cruise missiles, which can be used without entering the air defense coverage area at all, from a distance of up to 250 km. There are Kh-29, Kh-25M, S-25L air-to-surface missiles, which, although they seem to be considered as anti-ship missiles, are not theoretically used against ground targets. X-59M each aircraft can take up to three pieces, X-29 and the rest - up to six.

Adjustable bombs 1500 kg (2-3 pieces) or 500 kg (up to 6 pieces). We leave all these tales from Ukrainian broadcasters that “this is a Russian bomb lying” because a bomb that was dropped from an airplane simply cannot lie like that. In such cases, it simply carries it to the ground.

Is it possible to work with conventional bombs? Yes, it is possible. Up to 16 FAB-500, up to 22 FAB-250 or up to 34 FAB-100. Plus, inherited from predecessors, you can hang up to 6 units with NAR S-8 (120 missiles) or S-13 (30 missiles), as well as up to 6 S-25 missiles. Yes, the S-25 is a very stupid missile. Unmanaged. But she has warheads weighing 150 kg, of which 58 are explosive charges, the rest is 9000 fragmentation elements.
In fact, of the entire world family of fighter-bombers, the Su-34, if not the most “punching” (and who compared it in battle?), then definitely the most comfortable. This was said by the pilots themselves, with whom it was a pleasure to talk. Of course, they did not fly the F-15 and Tornado, but there were those who could compare with the Su-24.

It is somewhat incorrect to compare the use of the Su-34 in Syria and in Ukraine. In Syria, it was possible to calmly peck at columns of militants with conventional bombs, completely without thinking about extraneous things. 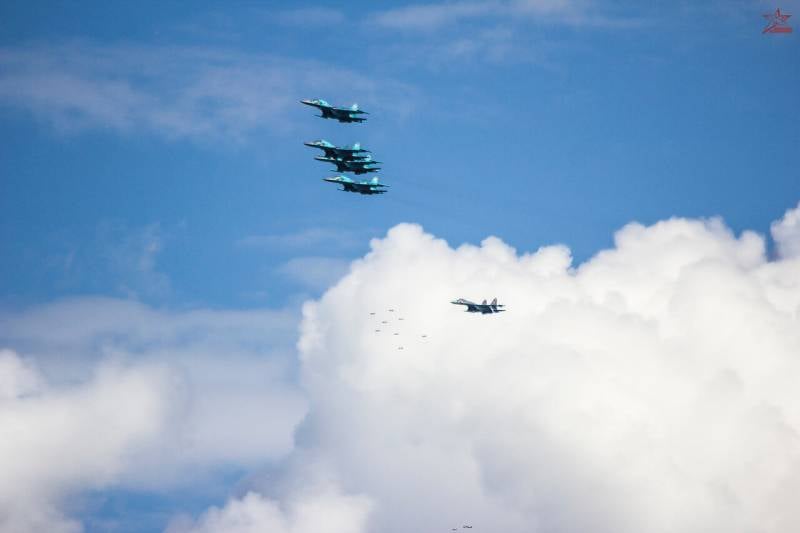 In Ukraine, obviously, one has to take into account the peaceful infrastructure of the cities where the terrorist battalions and the Armed Forces of Ukraine have dug in, using non-combatants as a shield. Hence - only high-precision guided weapons or the use of conventional weapons with a huge number of restrictions. This is understandable, understandable and losses.

But in fact, it is here that the Su-34 can show and realize its strengths to the maximum. Accuracy and survivability. Something that is no longer available to either the Su-24M or the Tu-22M. And it remains only to be glad that our Aerospace Forces have such an aircraft at their disposal.