Projectile 3OF39 "Krasnopol" in flight configuration. Photo by Wikimedia Commons

Rocket troops and artillery are actively involved in the current Special Military Operation. Using a variety of weapons and ammunition, they hit various targets and enemy targets. Recently, the Ministry of Defense showed how howitzer artillery uses Krasnopol guided missiles. Due to a number of features and advantages, this weapon It turns out to be a very successful and convenient tool for solving the problems at hand.

The use of guided artillery shells in the current Special Operation was first shown on March 13. The Ministry of Defense published a short video filmed by a reconnaissance unmanned aerial vehicle. The fire mission was to defeat the enemy's camouflaged field command post. What kind of forces and means were involved in the strike is not reported, although the basic principles of its implementation are clear.

Video from the Ministry of Defense shows a section of the area with a forest belt; roads pass nearby, and some buildings are located at a distance. Then a large and bright flash appears among the trees from a shell explosion. In the following frames you can see a cloud of smoke. Unfortunately, green spaces and video quality do not allow viewing the target before the projectile hits or after the impact.

The use of "Krasnopol" on the Ukrainian command post
It is reported that the Krasnopol guided projectile aimed at the intended target and hit it. Means of objective control confirm the exact hit on the command post and its complete destruction. Thus, the ammunition and other elements of the artillery complex confirmed their characteristics and capabilities.

There is every reason to believe that the shown attack on the Ukrainian command post is not the first or the last of its kind. Such weapons can be actively used on all fronts against a variety of targets and objects, but not every such shot is shown to the public.

The 152-mm projectile 3OF39 Krasnopol is the main element of the 2K25 guided weapon system for artillery. Its development has been carried out since the late seventies in the Tula Instrument Design Bureau with the participation of the Leningrad Optical and Mechanical Association and other organizations. The work was completed in the first half of the nineties, and in 1995 the 2K25 complex was officially adopted by the Russian army. 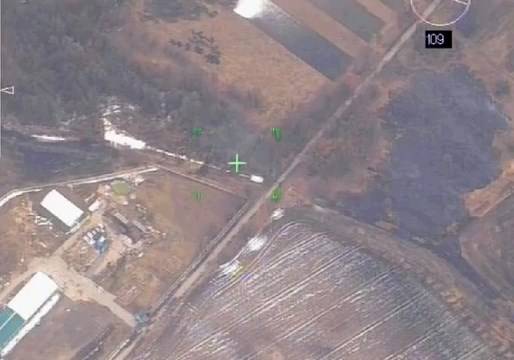 Frame from UAV video: terrain with a target
Subsequently, several modifications of the complex were developed with certain differences. So, in the project 3OF39M "Krasnopol-M" improved the design of the projectile, and "Krasnopol-D" provided for an increase in the firing range. Modifications of existing shells in foreign caliber 155 mm were also created.

Serial production of 2K25 complexes and 3OF39 shells was mastered in the mid-nineties. The Russian army became the starting and main customer of such products. At the end of the decade, export deliveries began: India and China received significant quantities of shells and related equipment. New orders were expected, with some foreign armies even conducting their own tests.

For a long time, Krasnopol products were used only as part of the exercises. The first cases of their combat use against real targets took place in 2016-17 as part of the Syrian operation. Guided projectiles were used to quickly and reliably destroy the enemy near the Khmeimim airbase. 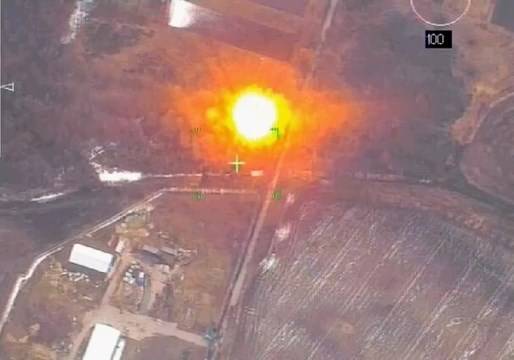 Frame from UAV video: shell explosion
Now the Russian army is using 2K25 in the Special Operation to Protect Donbass. "Krasnopol" is already showing itself as an effective means of defeating small targets and is making a certain contribution to the overall processes of the demilitarization of Ukraine. The operation has not yet been completed, and it is to be expected that Russian artillerymen will continue to use their guided weapons - with understandable results.

Features of the complex

The 3OF39 Krasnopol basic modification guided projectile is made in a thin-walled body with a streamlined head and cylindrical tail. There are two X-shaped sets of planes that are laid out in flight. The total length of the ammunition is 1305 mm with a caliber of 152 mm. Weight without other components of the shot - 50,5 kg.

For use in self-propelled artillery, the long ammunition is divided into two compartments that are docked before use. The head control compartment accommodates the homing head, autopilot unit and rudders. The tail "projectile block" carries the warhead, stabilizers and a jet engine.

"Krasnopol" is equipped with a semi-active laser homing head 9E421. In the transport position and at the time of the shot, the seeker is covered with a drop cover. On the descending part of the trajectory, the head searches for a target illuminated by a laser designator. The QUO is provided no more than a few meters, regardless of the firing range. The defeat is carried out by a high-explosive fragmentation warhead weighing 20,5 kg, the mass of explosive is 6,4 kg. 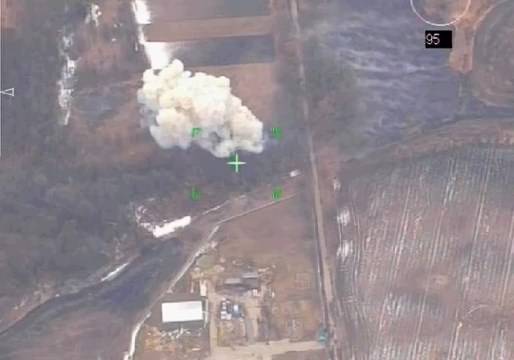 Composition of the 2K25 complex: Shot with a guided projectile 3OF39 with a semi-active laser homing head and a propellant charge;
Complex of means of automated fire control "Malachite". "Malachite" includes target designators-rangefinders 1D22, 1D26, LCD-3M1.

Communication facilities are also needed to coordinate the actions of reconnaissance and artillery. In recent years, the use of "Krasnopolya" is provided by UAVs of various models. In the latter case, an increase in the speed and flexibility of the use of the entire artillery complex is ensured.

The 3OF39 projectile is active-reactive and is equipped with its own engine. It is used as part of the 3VOF64 and 3VOF93 shots with a variable charge. Shots with "Krasnopol" can be used by any domestic 152-mm guns. Due to the propellant charge and jet engine, the firing range, depending on the gun used, can reach or exceed 20 km.

In the course of further modernization, the design of the Krasnopol was refined, and the main characteristics changed. So, when developing the 3OF39M Krasnopol-M product, they abandoned the detachable circuit, which made it possible to optimize the layout and other features. The monoblock projectile is 960 mm long and weighs only 45 kg. Reducing the mass made it possible to increase the range to 25 km. The minimum range of application is 3.000m.

In the middle of the tenth years, the development of the Krasnopol-D project was reported. Its main innovation was the use of satellite seeker. An increase in firing range was also expected. At the same time, the projectile was supposed to retain its former form factor and combat qualities. 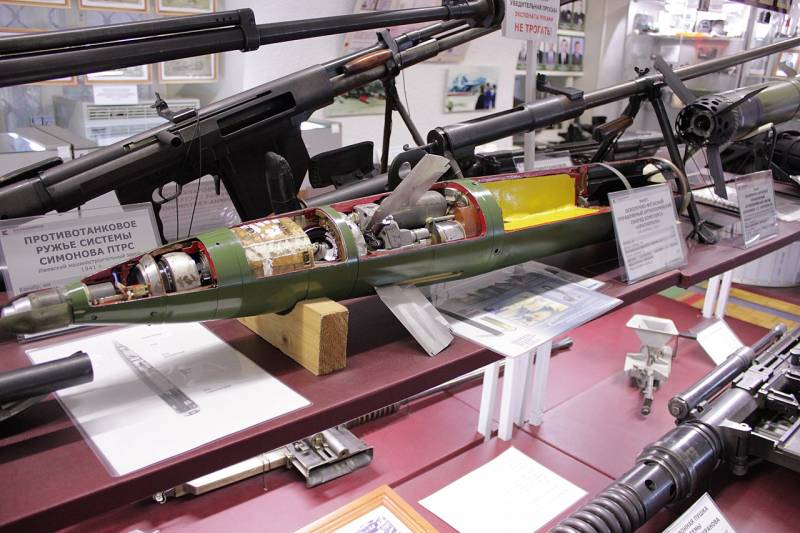 Split layout of "Krasnopol". You can see the division into compartments and internal equipment. Photo by Wikimedia Commons
For export, 155-mm modifications of shells were created, differing only in the dimensions of the hull. On the basis of the basic Krasnopol, the product "Complex KM-1" was made. The modernized Krasnopol-M2 is the KM-2 Complex.

The 2K25 complex with the Krasnopol projectile was created as a high-precision weapon capable of hitting small stationary targets with the first shot. The design tasks set were successfully solved, and the army received the desired guided munition. Then there were its improved versions with improved tactical and technical characteristics and new advantages.

The main advantage of the Krasnopol projectile is the presence of a seeker and the ability to aim at an illuminated target with minimal deviation. This dramatically increases the probability of hitting the target with the first shot, regardless of range and other factors. In addition, the risk of missing and causing damage to surrounding objects is reduced. With all this, the product 3OF39 surpasses the standard unguided "blanks" in terms of firing range.

The experience of defending the Khmeimim base shows that reconnaissance and strike circuits and complexes using Krasnopol are a highly effective means of defense. They are able to quickly and effectively identify threats, as well as hit them over the entire range of ranges. 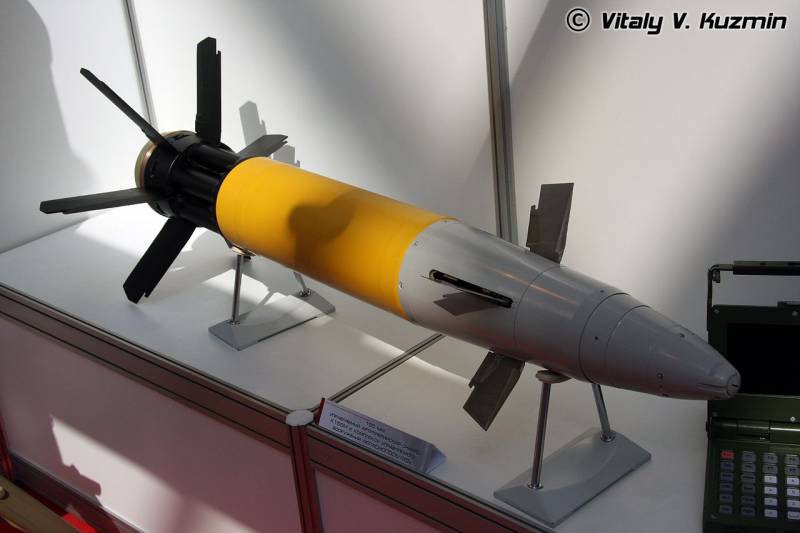 Improved export "Krasnopol-M2". Photo Vitalykuzmin.net
As part of the current Special Operation, these advantages are again used. In addition, high accuracy is now of great importance. It allows you to hit specific objects and targets without threatening the surrounding buildings. Ukrainian formations are trying to hide behind civilians and civilian infrastructure - and Krasnopoli and other guided weapons allow them to be accurately hit without risks to the population.

To achieve the required performance indicators of a modern army, high-precision guided weapons of various classes are required. In particular, rocket troops and artillery need such weapons. Since the mid-nineties, our gunners have had at their disposal shells of the Krasnopol family, which combine high accuracy, range and power.

Recently, Krasnopol products have been used in real operations. Together with various artillery systems and reconnaissance equipment, they hit enemy targets, ensuring the solution of assigned tasks with minimal ammunition consumption and virtually no collateral damage. All these qualities and opportunities have been actively used during the demilitarization of Ukraine in recent days.