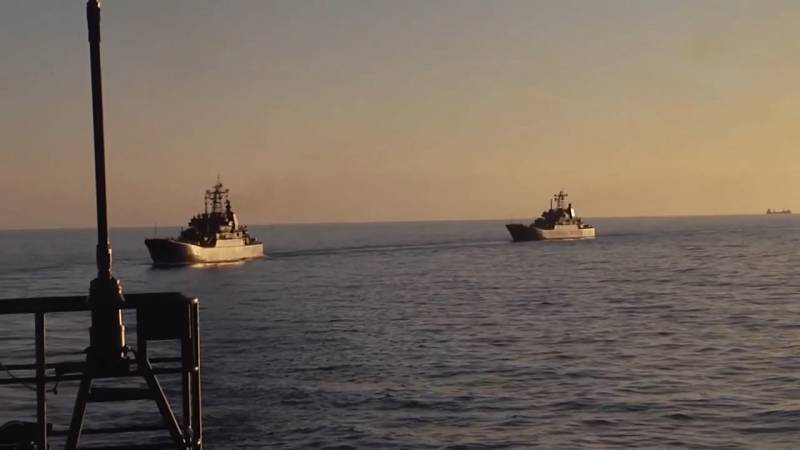 A group of landing craft enters the Black Sea for exercises, February 2022.

Ships of the naval forces were involved in the Special Military Operation fleet. They operate in the Black Sea, and they are entrusted with a number of different tasks. They are responsible for covering the area of ​​operation, holding down the enemy's actions, striking at distant targets, etc. The tasks set are successfully carried out, and thanks to this, the Navy makes a significant contribution to the achievement of the overall goals of the Special Operation.

The Black Sea Fleet has been participating in the Special Operation since its first hours. It was he who was entrusted with the execution of part of the first strikes on the infrastructure of the demilitarized enemy. In the future, the combat work of the Navy continued. Surface ships and coastal troops reportedly participated in various activities. Apparently, other structures are also involved.

According to some information, there are several pennants of other fleets in the ship grouping in the Black Sea. They arrived in this water area earlier, as part of naval exercises, and now they are also involved in real events. However, the exact list of such "guests" was not disclosed.

It is known that the missile cruiser "Moskva" pr. 1164 and the latest patrol ships pr. 22160 - "Vasily Bykov" and "Dmitry Rogachev" have already participated in various episodes of the Special Operation. Small missile ships have been and are participating in delivering high-precision strikes. Apparently, these are pennants of projects 21631 and 22800, but which ships carried out live firing were not reported. 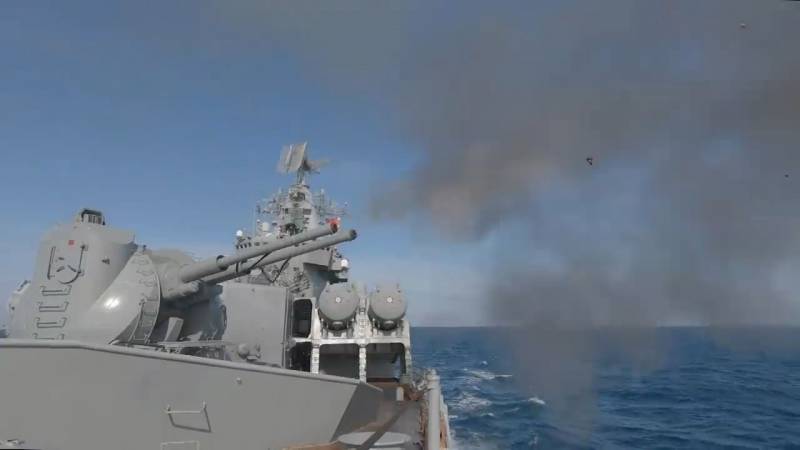 Missile cruiser Moskva using artillery, February 2022
Almost from the first days of the operation, large landing ships are regularly mentioned in various sources. A group of 5-6 such ships is located in the western part of the Black Sea, but has not yet started landing. If the BDK really have such tasks, then the personnel and equipment of the Marine Corps should be on board. Upon receipt of the order, this component of the coastal troops will go into battle.

The role of the marine aviation in the Special Operations remains unclear. The Black Sea Fleet has a fairly large fleet of front-line aircraft of various types, capable of solving a wide range of tasks. They can be used in the current operation to maintain air superiority and defeat ground targets, but details of this kind have not yet been announced. 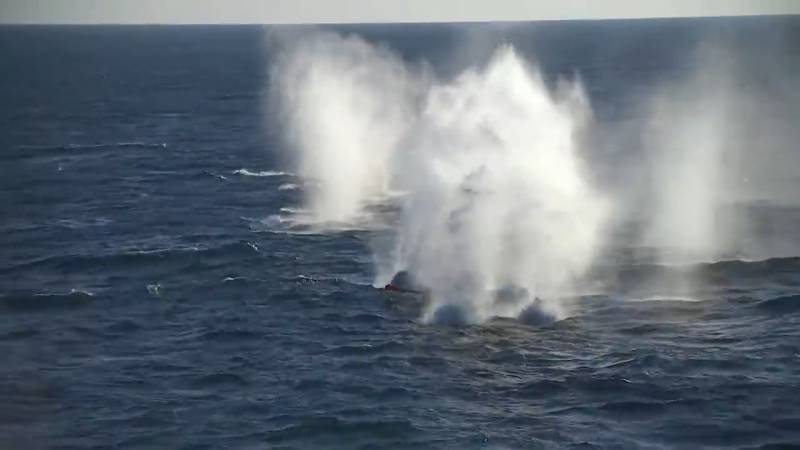 In a few days, Ukrainian boats will be at the target site
Thus, despite the lack of some information, a fairly detailed picture is formed. The Black Sea Fleet, based in the immediate vicinity of the zone of the Special Operation, naturally takes the most active part in it. Its forces and means corresponding to specific tasks and goals are involved in the activities. This approach allows you to get the desired results of combat work. At the same time, the Black Sea Fleet is reinforced with combat units of other formations, and also operates together with other branches of the military.

The Black Sea Fleet began its combat work almost immediately with the start of the Special Operation. In its first hours, a massive missile attack was carried out on key objects of the enemy's military infrastructure. To destroy a significant part of the targets, Caliber cruise missiles were used, so far available only on ships and submarines.

During the Special Operation, it was repeatedly reported about new strikes using high-precision weapons, incl. products "Caliber". According to various estimates, by now the ships have used up to several hundred of these missiles and have fully realized their potential. Cruise missiles have proven to be one of the most effective means of demilitarization. Therefore, they will continue to be used - with clear consequences for the enemy. 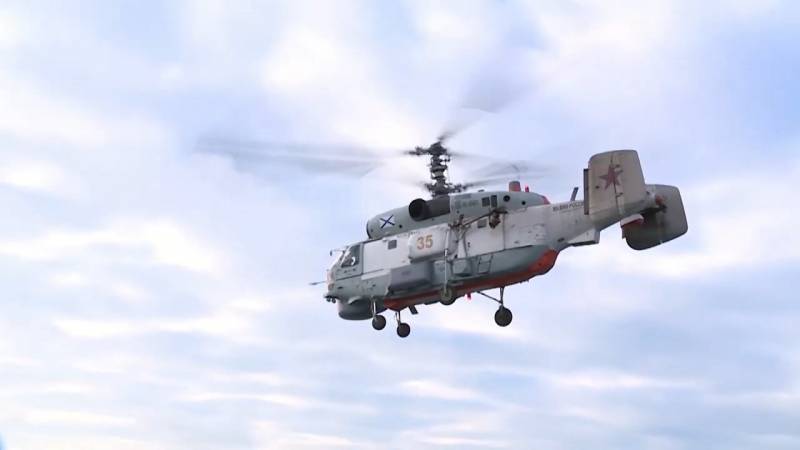 Naval aviation - still in training, February 2022
It should be noted that the ships of the Black Sea Fleet use not only cruise missiles, but also other weapons. So, starting from February 25, the Ministry of Defense reported several times about attempts by Ukrainian combat boats to attack our ships using "mosquito" tactics. Such attacks ended with a natural result - each time the "swarm" lost several combat units. To combat such an enemy, artillery of various calibers was used.

However, an episode is known in which the Black Sea Fleet managed to solve the task without the use of weapons. So, on February 24-25, without a single shot, Fr. Serpentine. The garrison of the island surrendered and was transferred to the Crimea. However, during the removal of the surrendered fighters, another enemy mosquito attack had to be repelled.

With the direct participation of the fleet, other tasks are also solved. So, the other day, the port of Berdyansk was taken under control, which previously served as one of the bases of the Ukrainian naval forces and border guards. Now the anti-sabotage forces of the Black Sea Fleet are guarding the port and the captured trophies.

It should be noted that the work of the Navy in the current Special Operation is connected not only with the direct defeat of targets or active actions to take new territories. No less important is the task of controlling water areas, territories and airspace for one purpose or another. 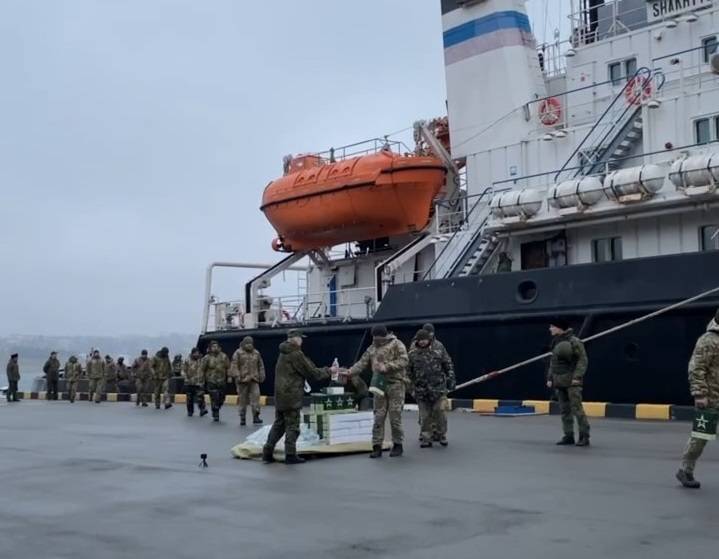 Captured garrison about. Serpentine gets rations
The events of recent weeks and days clearly show that the Black Sea Fleet, represented by ships and coastal formations, completely controls the Black Sea water area. The remnants of the Ukrainian Navy are blocked at the remaining bases, and any attempt to use them in combat will again lead to losses. The same applies to the airspace over the sea and over the coast. The work of Ukrainian aviation in these areas is virtually excluded.

It is important to take control of Serpentine. In the past, it housed air defense facilities that controlled a significant part of the Black Sea. Also, the island is an advantageous position for anti-ship, anti-aircraft or other fire weapons. However, now the appearance of enemy weapons on it is excluded, and there is no threat to our ships and aircraft.

What tasks are assigned to the Black Sea BDK is unknown. However, even information about their release to the sea leads to curious results. The Ukrainian army is expecting an amphibious assault near Odessa and is trying to build defenses there. At the same time, the deployed units are tied to their positions and can no longer depart for other fronts. In addition, they become easier targets for demilitarizing strikes. 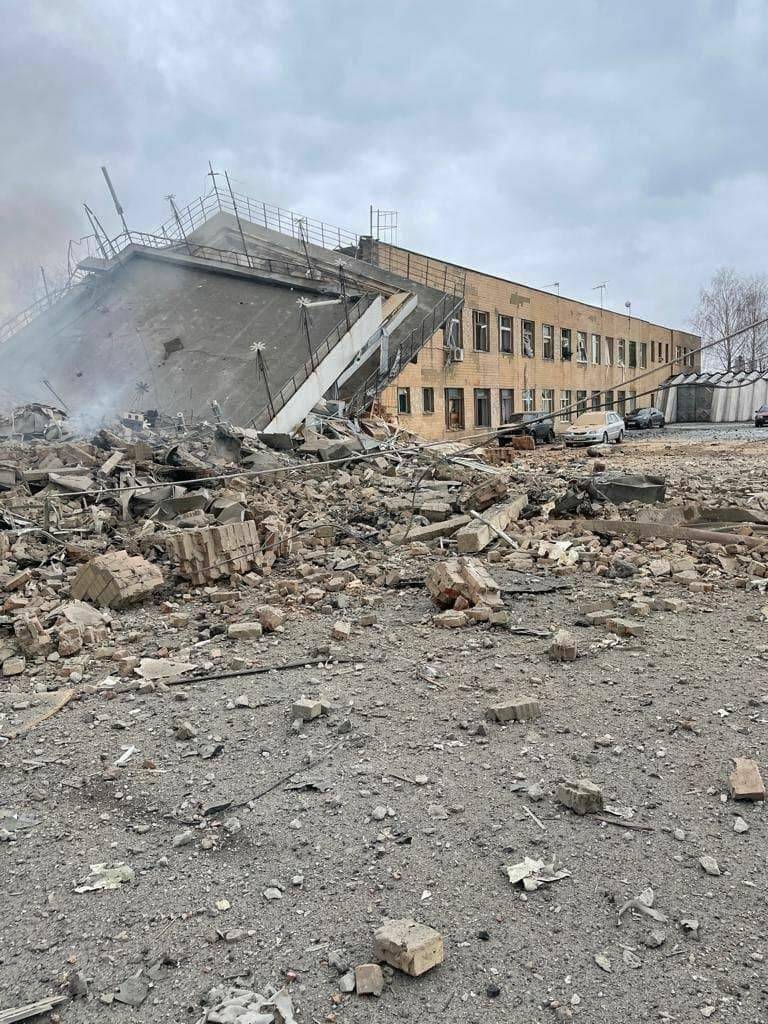 The building of the airfield in Vinnitsa, hit by a Caliber strike
Such "anti-amphibious defense" tries to take active steps, but has not succeeded in this. So far, she has only managed to fire on foreign ships and release a few fakes about unconfirmed “victories”.

The special military operation in Ukraine is still ongoing, and various types of armed forces are performing their assigned tasks. At the same time, it is already possible to consider intermediate results, incl. from the point of view of the combat work of the navy. And in general, the Navy shows itself in the best way.

The extensive capabilities of modern shipborne armaments of all main classes are clearly shown and confirmed. It is the fleet's missiles that account for most of the affected stationary objects of the enemy's military infrastructure. Also, our Navy successfully completed several naval battles, in which it easily disabled or destroyed enemy watercraft. The implementation of other measures, both combat and auxiliary, continues.

Thus, even now the actions of the Russian Navy and the results of its combat work are highly commendable. At the same time, the Special Operation has not yet been completed, and the fleet will have to continue work in all areas. Apparently, he will cope with future tasks.