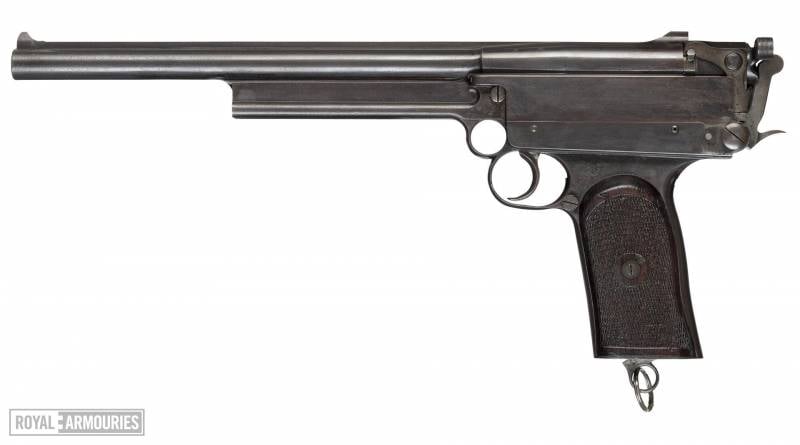 Pistol "Mars" from the collection of the Royal Arsenal (Leeds). View from the left. Variant with a long barrel, with a wider and heavier frame and attachment for a shoulder stock. A large round hole in the frame above the trigger guard served to ... lighten the frame, but it could well have been used to hold this pistol more firmly in your hand

Half an inch - make you shiver
A creature of heaven and earth,
Half an inch of everything is separated
From the death of your enemy!
Adam Lindsay Gordon (October 19, 1833 - June 24, 1870)
stories about weapons. Today our story will be dedicated to one of the most unusual and powerful pistols in the world, namely the Mars or Webley-Mars automatic pistol, which appeared just at the turn of two centuries, in 1900. Hugh William Gabbet-Fairfax of Leamington Spa (Great Britain) designed this dead-end miracle of weapons art, he began to deal with it in 1889, and he received a patent for it on October 15, 1900. They talked about him as a successful and prolific inventor, he seemed to come up with a lot of interesting things, but it was at that time that the idea came to him to create a powerful self-loading pistol for the military. As you know, the idea of ​​creating something for the army has been and is visited by many people who dream of making money on it. But here you have to listen to what the military tells you and what they want. Not everyone and not always succeeds, however ... So Gabbet-Fairfax was from a breed of people who do not want to make concessions to anyone, considering their invention to be the best. 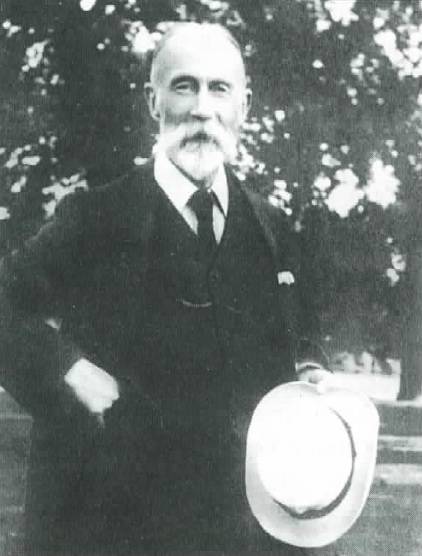 There he was, a handsome old man: Hugh William Gabbet-Fairfax of Leamington Spa. You can't tell from the look that you were engaged in inventing such deadly ... "things"!
First of all, he, like, by the way, many other designers of small arms, began with the creation of a new cartridge. Knowing the British military's addiction to heavy bullets with high stopping power and, accordingly, large calibers, he developed very powerful cartridges of several calibers at once: 8,5x26 mm, 9x26 mm and 11,2x20 mm (short) and 11,2x28 mm (long). And they were really very strong cartridges. So, a 8,5 mm caliber bullet had an initial speed of 533 m / s and a muzzle energy of 1294 J, and a bullet of a “long” cartridge (bullet weight 14,26 g) had a speed of 365 m / s and a muzzle energy of 957 J. A feature of the cartridges was bottle-shaped cartridge case and a large charge of gunpowder.

Cartridges for "Mars" and all "Mars": from left to right: .45 "Short", .45 "Long", .360 and 8,5 mm (.335). Photo: forgottenweapons.com
So it is not at all surprising that the model of his pistol, called "Mars" in honor of the Roman god of war, chambered for a long cartridge .45 (11,2 mm) at the time of its appearance turned out to be the most powerful pistol in the whole wide world! It is already in our time that the famous "Desert Eagle" and similar samples of powerful pistols appeared, and at that time it was the only one. And all because the British officers who fought the Mahdists in Sudan, as well as those who pacified the Kaffirs and Zulus in South Africa, often complained that their own 9-mm revolvers were far from always effective against them. Hence, the designer’s interest in precisely such powerful cartridges and heavy pistols made for them is understandable. 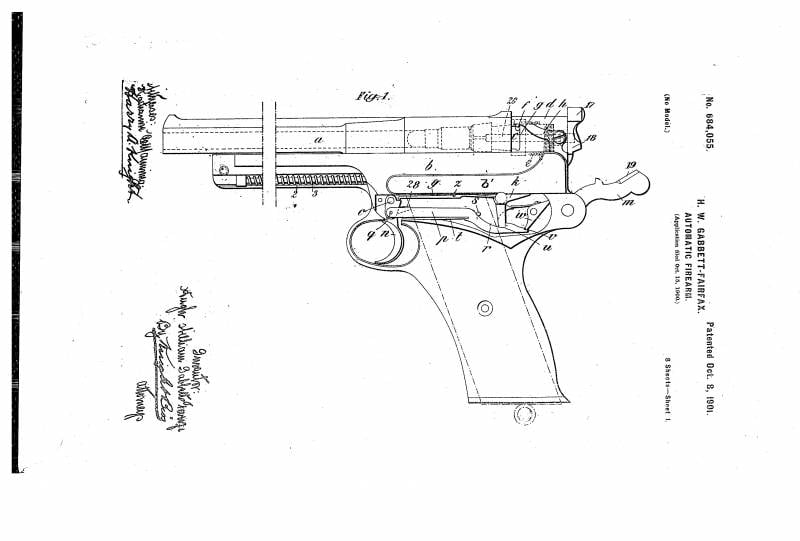 Scheme of the device of the main components of the pistol from US patent No. 684055 dated October 1, 1901
Naturally, it was simply impossible to shoot such powerful cartridges using automatic blowback. A bolt was required that locks the barrel, and locks it in the most reliable way. Therefore, Gabbet-Fairfax decided to use in his pistol a type of automation that is rarely found on pistols, which operates due to the long stroke of the barrel. But with such a device, feeding cartridges from the magazine located in the handle was difficult. And ... the designer figured out how to get around this difficulty. He came up with a store covered with a lid on top, so that cartridges from it could not move up, as usual. They had to be inserted into this store with bullets forward. 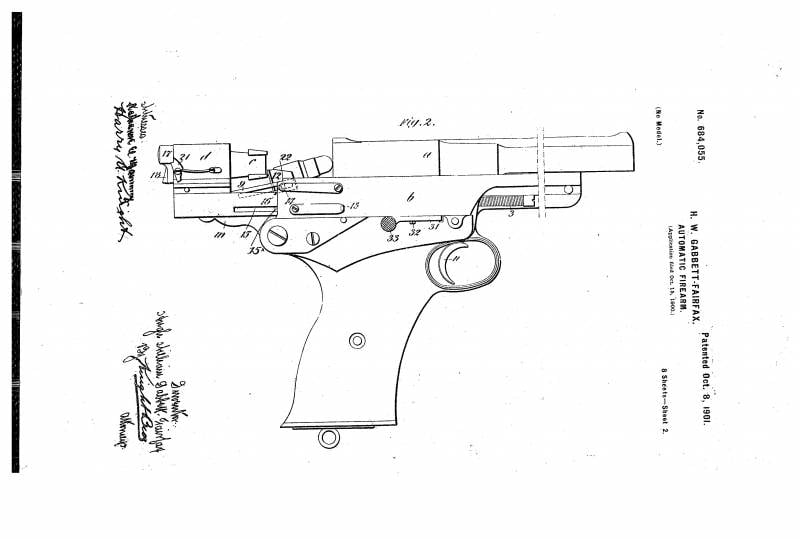 Pistol, right side view. In this diagram from US patent No. 684055 dated October 1, 1901, the bolt with lugs and the cartridge are clearly visible before it is fed into the chamber
The bolt of the pistol was made rotating, with four lugs, with which it was firmly fastened to the barrel at the time of the shot. 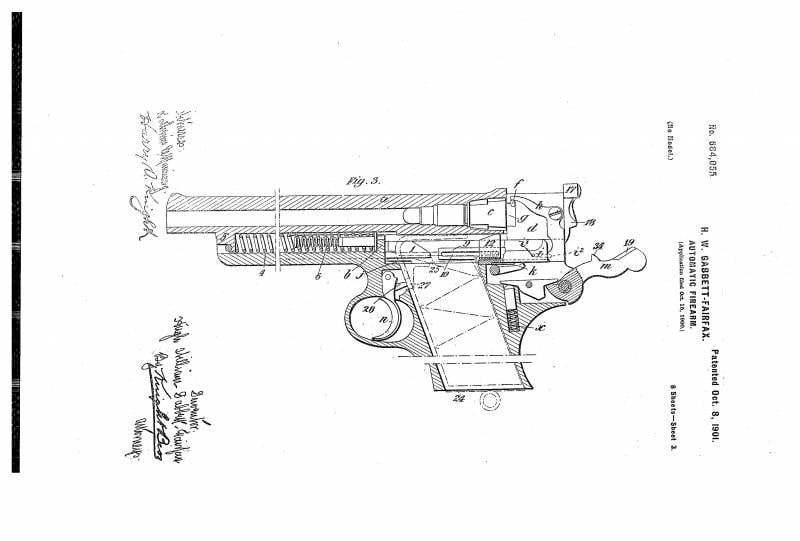 This diagram from US patent No. 684055 dated October 1, 1901 shows the shape of the plate that closes the magazine from above (shown in dotted line), as well as the cartridge feeder and trigger, and there is no needle for cocking it by hand. No holes on the frame above the trigger guard
The automatics of the pistol worked like this: immediately after the shot, the barrel began to move backward, compressing two springs put on two rods under the barrel. Moving back, the barrel, linked to the bolt, removed the cartridge from the magazine and pushed it back onto a special U-shaped feeder. At the same time, the bolt itself rotated and moved back even further, and the barrel returned to its extreme forward position by the force of the springs. In turn, the shutter in the rearmost position pressed on the feeder, and he raised the next cartridge to the chambering line. Interestingly, the designer provided for a shutter delay when the trigger was pressed back after the shot. Thanks to this, immediately after the shot and the rollback of all the moving parts of the pistol back, the barrel managed to go forward, but the bolt remained in the rear position until the shooter released the trigger for another shot. At this point, he immediately took off, picked up the cartridge from the feeder, he slid along the magazine cover and ... recovered into the chamber, while the bolt turned and locked the bore. This connection was strong. Due to the long stroke, the bullet had time to leave the barrel before reaching the extreme recoil point of the moving parts. But ... all these advantages were leveled by the large dimensions and weight of the pistol. 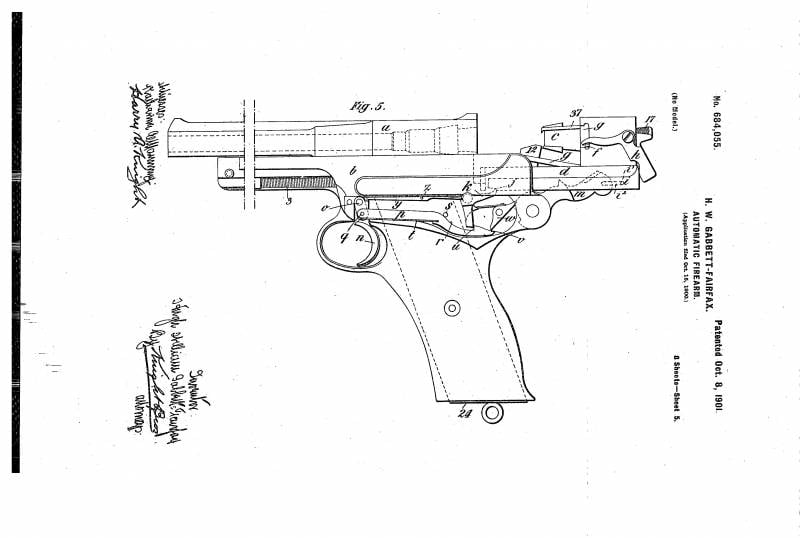 Shutter retract to rearmost position. Very, let's say, at the same time, its entire mechanism is “exposed”!
The movement of the shutter also led to the cocking of the hammer, which leaned back. After that, he remained cocked even after the shutter returned to its previous position. Well, for the first shot, the shutter was cocked manually. To do this, two cylindrical protrusions were provided on it in the back, similar ... to the ears of Mighty Mouse. In this way, he looked like a Schwarzlose pistol, about which there was already an article on VO. 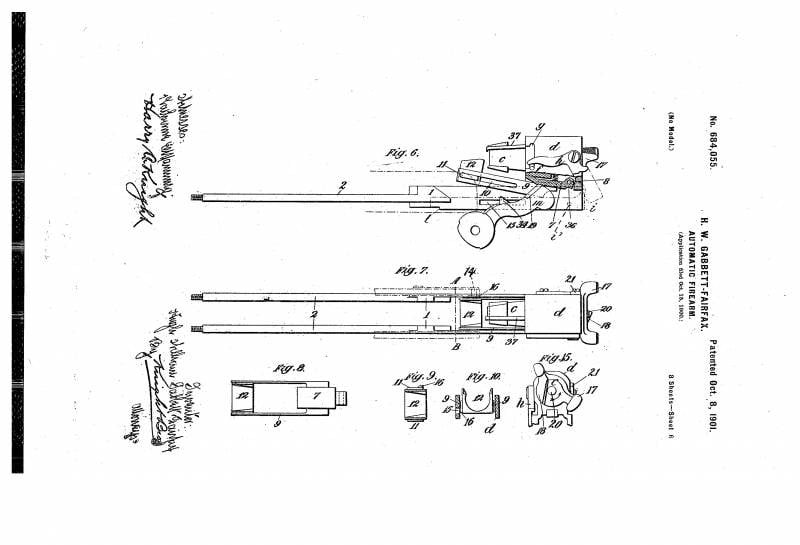 View of two spring guides, cartridge feeder (shaped like a tuning fork) and bolt, side and rear views. Item 37 - extractor
On the left side of the pistol frame, just behind the trigger guard tide, there was a magazine latch control button - a decision not typical for that time, but which has become common for modern pistols. The cheeks on the handle were wooden, and the sight was the simplest - open and unregulated. 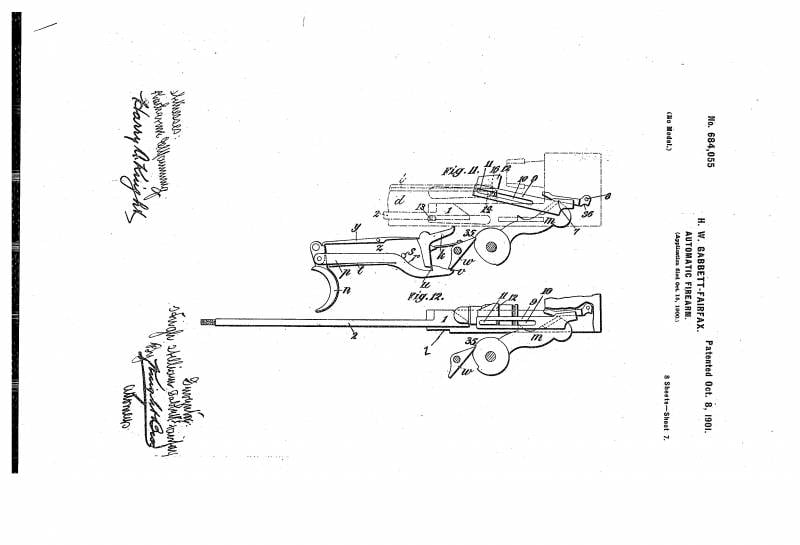 The mechanism of the cartridge feeder
From March 1901 to 1903, the British military tested the pistol (as a result of the designer's persistent proposals) ... eight times. The peculiar record was certainly the result of Gabbet-Fairfak's persistence, but it also suggests that this gun still attracted them with something. And I must say that he had merit. Good accuracy was noted, but most importantly, a very large penetrating and stopping effect of bullets fired from it. However, the result of all these worries was the rejection of the pistol by the British War Office. And it buried all the designer's hopes for a major military order, because it was planned that the new pistol would replace the Webley revolver in service with the British army. Among the reasons that caused the failure, indicated too much recoil when fired, the mechanical complexity of the design, the heavy weight and dimensions of the pistol. And in itself, shooting from it was simply uncomfortable, which is also important. So, in 1902, the head of the test noted that everyone who fired at least once from this pistol no longer wanted to shoot from it, and the process of firing from it was described as something "incredibly terrible and disturbing." Although, trying to please the military, the designer submitted for testing a lightweight model chambered for 8,5x26 mm. But ... and with this cartridge, it turned out to be too "exciting" to shoot from it! 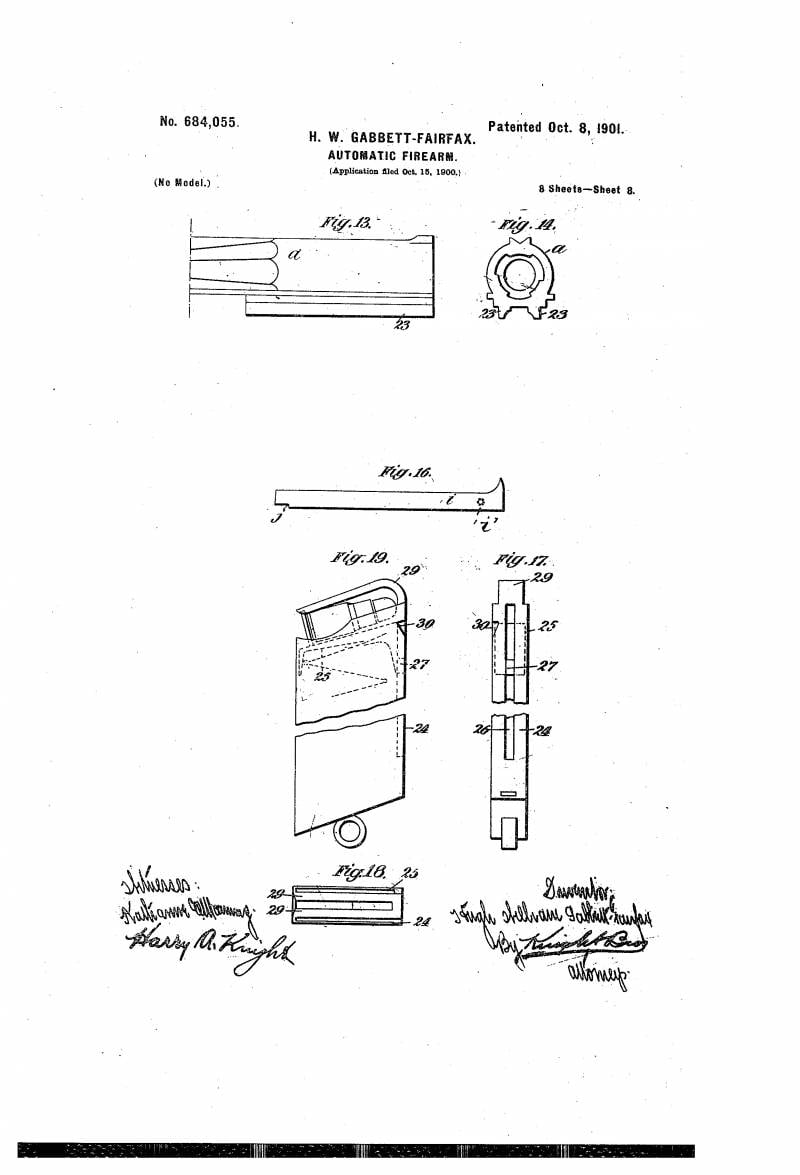 Device shop for the pistol "Mars"
In 1902, Gabbet-Fairfax, without waiting for a military order, declared himself bankrupt, but in March 1904 in Birmingham he managed to create a company called the Mars Automatic Pistol Syndicate, which tried to establish a commercial production of this pistol. Its release was to be carried out by Webley and Scott, and then other arms enterprises in London and Birmingham were to be connected to it. It was possible to release 81 copies of "Mars", but things "did not go further" due to the lack of commercial demand. Moreover, by 1907, the “syndicate” also went bankrupt, having failed to capture any noticeable niche in the commercial arms market! 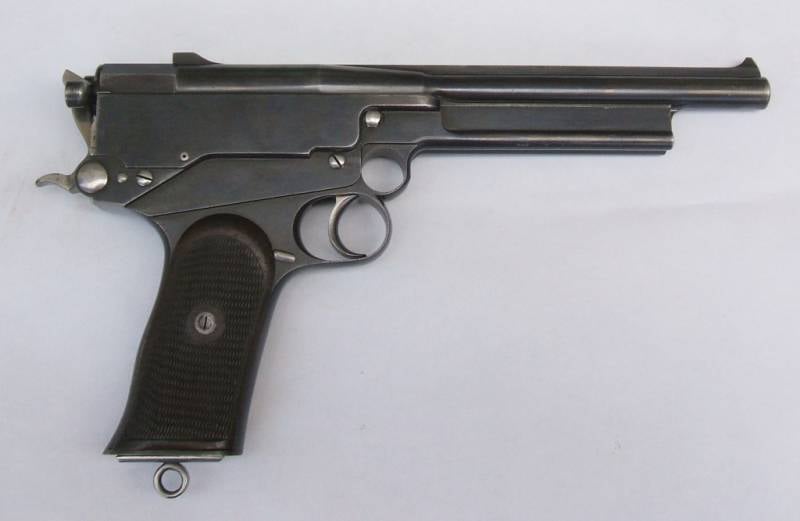 And the conclusion: to do simply is very difficult, and to do difficult is easy, although not always and not in everything, and the result also varies! But, of course, standing on the “bloody sand”, it was better to have at least such a (preferably ten-shot!) Pistol than none at all!