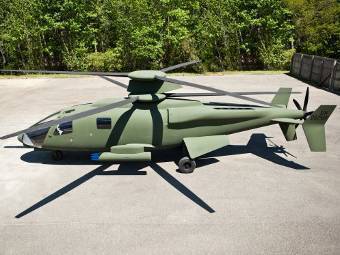 The American company Sikorsky decided to continue the evolution of its high-speed helicopter X2 by creating two prototypes of a multifunctional rotary-wing for the US Army. The new helicopter will be created specifically for the army tender for the supply of light reconnaissance machines to replace the aging Bell OH-58D Kiowa Warrior. In this competition, Sikorsky will have to compete with Bell Helicopter and Eurocopter, which will offer modified versions of existing equipment.

Plans to create a new high-speed helicopter company Sikorsky announced 20 October 2010 of the year. The new helicopter, called the S-97 Raider, will be built according to a coaxial rotor arrangement. The fuselage will be made according to the rotor wing layout - partial wings will create a partial lift in flight. The latter will be equipped with pylons for outboard weapons.

According to Sikorsky’s classification, the new machine will be a transport-attack helicopter, which will also be possible to use for reconnaissance from the air, to guard other air vehicles (for example, V-22 Osprey on navy), urgent medical evacuation, transportation of landing, striking at enemy targets and fast transportation of goods. S-97 will be able to fly at a speed of 200 knots (370,4 kilometers per hour) with the possibility of a short-term increase in this indicator to 220 knots. As expected, the first prototype of the new helicopter will make its first flight in the next 50 months.

The S-97 will be powered by T700 engines of the American company General Electric with shaft horsepower of 2300. Engines of this family are used today in many US military helicopters, including Boeing AH-64D Apache Longbow, Bell AH-1Z Viper, Bell UH-1Y Venom, NHI NH90, Sikorsky S-70C and Sikorsky S-92. 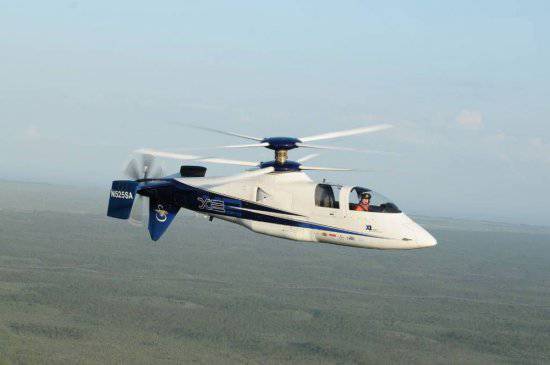 S-97 is planned to be created on the basis of a prototype of a high-speed helicopter X2, tested by Sikorsky today. Part of the technical characteristics of the new X2 helicopter will be inherited. A high-speed Sikorsky helicopter is also created using a coaxial rotor arrangement, which has four blades and rotates in opposite directions. The X2 is equipped with a six-blade propeller. All screws are driven by a single engine through a complex transmission. According to Sikorsky plans, the helicopter will be able to reach speeds up to 260 nodes and fly to a distance of 1300 kilometers.

S-97 Sikorsky plans to complete the preliminary design in 2011 year, although the mass-dimensional model of the promising machine presented the 20 of October 2011 of the year. The presented model has small protruding wings on the sides in the middle part of the fuselage and a far-apart tail. However, this option S-97 in the series may not go. You can look at the expected appearance of the perspective helicopter in the video (file size is about 50 megabytes) on the Sikorsky website.

Initially, the S-97 Raider will be created for the US Army, which in 2009 published the Armed Aerial Scout (AAS) program. As part of this program, the military is looking for a replacement for the outdated Bell OH-58D Kiowa Warrior aging light reconnaissance helicopters. The technical requirements for the new helicopter are still being worked out and are not fully known. The tender as such has not yet been announced. As expected, the tender for the supply of new helicopters will begin in the second quarter of 2011. Currently, the US Army is armed with X-NUMX OH-818 Kiowa helicopters, 58 of which are OH-368D. 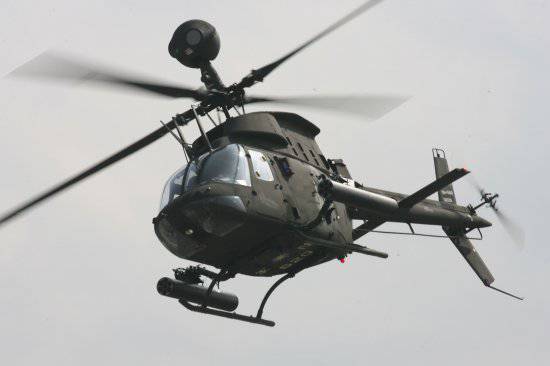 Interest in a promising military tender has already been shown by several companies that will have to compete with Sikorsky. In particular, Bell Helicopter, whose products are used today by the army team, announced its intention to take the path of further improving the time-tested Kiowa Warrior. This helicopter is expected to receive new, more powerful Honeywell HTS900-2 engines, as well as, possibly, new propellers.

In turn, the European company Eurocopter has established a joint venture with Lockheed Martin to create a new AS645 Armed Scout helicopter based on EC145 and AS645 Lacota. For the competition, Armed Scout is developed under the symbol AAS-72X. As expected, the helicopter will make its first flight in 2011. Presumably, the new machine will be able to reach speeds of up to 270 kilometers per hour, and its combat radius will be about 690 kilometers.

At present, the creation of machines for an army tender is complicated by the fact that the detailed technical specifications of the future helicopter have not been made public. It is only known that, according to the requirements of the US Army, the new machine will have to be able to fly and hover at an altitude of 1,8 thousands of meters at an ambient temperature of 35 degrees Celsius or higher with a payload of one ton. According to Eurocopter, Bell Helicopter and Sikorsky, their helicopters will be able to hover at that altitude and at this air temperature. 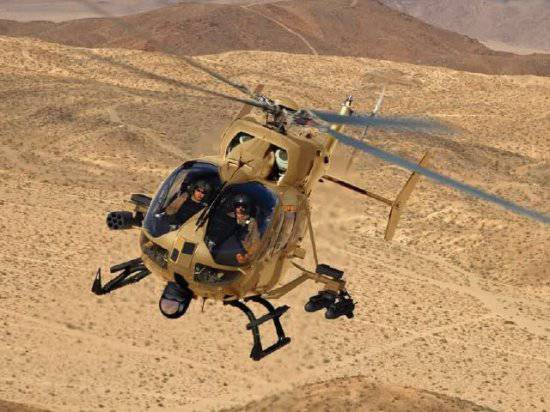 At the same time, Sikorsky claims that the company’s new helicopter will be able to hover thousands of meters high at 1,8, carrying six soldiers in full gear and a full set of outboard weapons. At the same time, if the Raider will carry only weapons, then its height can be up to three thousand meters. It should be noted that the majority of single-rotor helicopters are not able to hang at one point at high air temperatures, which imposes certain restrictions on the use of military equipment in hot climates. The requirements of the US Army are based on the experience of using helicopters in Afghanistan.

Whose victory can end the tender of the US Army, it is very difficult to predict. On the one hand, the S-97 may be of interest to the military for its speed characteristics. In addition, the helicopter will be created with the use of stealth technology and differ in low noise. On the other hand, Sikorsky's competitors will propose to tender existing and proven machines (OH-58D and AS645 are already being used by the US Army), rather than revolutionary technical solutions. But even if Sikorsky does not get a victory, tragedy will not happen - the company intends to offer S-97 to the US Navy, Marines and Air Force. Anyone interested.