Will there be a new AK?

25 September 2012
497
Probably not the only one I am waiting for the launch into mass production and at least the minimum distribution of the new machine. Recently, however, news "from the front" has not been observed, and, in addition, many print publications, whose circulation is not counted at all by the tens of thousands (for example, such an edition as "The Lie of Capitalist Disorder of Pensioners"), begin to say that and it will not be at all, and that the current models simply undergo modernization by installing on them mounting straps like "picatinny". As usual in such situations, the authors of such articles refer to anonymous sources: the officer who “saw”, the special forces soldier who “felt”. I will try to dig deeper in this matter and at least find out what exactly is the basis for such articles, just ask the dump truck not to call.

I want to note right away that I am not the so-called patriotic patriot, but the “decaying” west will not wait from me, I just think that in matters of armament even a little exaggerate the possibilities weaponsthat is, with a purpose, to develop patriotism in people's minds is a crime.

In this question there should be bare facts, which let it be better to be a little worse than the reality, the better. Then financing, perhaps, bold ideas of designers will not be buried in archives, but at least they will be implemented in prototypes, and there, collecting all the best, and not far from the series. And so it turns out that everything is fine with us, and since everything is fine, then why develop something? In general, my position is as follows: even if by all types of weapons “ahead of the rest of the planet”, then it is by no means impossible to stop, and the weapon development process should be constantly stimulated, somewhere with a premium, and somewhere with a weighty kick under fifth point. But back to the main topic of the article. 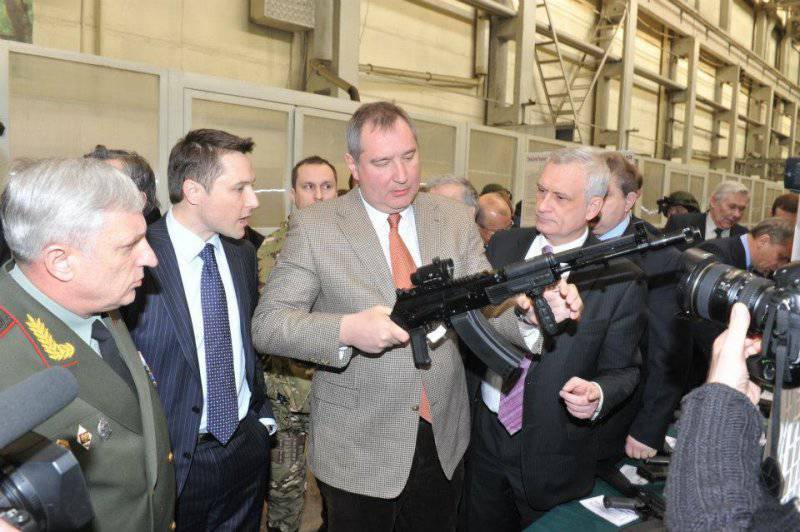 From the very beginning, as the AK with the digital designation 12 appeared in the hands of Rogozin, it was clear that all the noise around this weapon was clearly superfluous and was created solely for political reasons. Despite all the cheerful talk that the army should be re-armed, and it should be done immediately and as quickly as possible, the wagon did not move from its place, since even the loudest words cannot bear with a piece of money called money, which is very much needed for complete re-equipment . Nevertheless, the weapon was shown, and even the current sample seemed to be there, it remains only to process it with a file and into the series, gradually, step by step, even if it were possible to replace completely old samples during 5 years. That, apparently, is planned to be done, but, most likely, unforeseen problems arose, as always, which prevented the process from starting. But people are worried, weapons showed, they talked a lot and were abruptly silenced, there is no certainty, which is what journalists use when making sensational articles. Well, oh well, maybe they are not to blame, maybe the editor said “it is necessary!”, But not to lose a person of work because of some kind of conscience and self-esteem.

The most common method of creating a “sensation” is to pull words out of context and insert them in the form of quotations already with the author’s comments, and you don’t find fault. The second technique, supplementing the first, is a reference to an anonymous, but very knowledgeable and trusted source. These two tricks of the "successful" journalist were used in this case. At first, information appeared from an unknown fighter of a special unit, who, in view of the lack of normal weapons for service, bought! Attention! in a hunting store. In the same place, as it turned out, they buy weapons and faces that are all bad, in the mountains and hiding in the forests, in general, nonsense. But some moments in this “interview” were still true, for example, such as a lack of normal equipment. It was also noteworthy that such a “bad” domestic weapon, in one of the answers to the question asked, suddenly became completely satisfactory in everything except the absence of the possibility of installing additional devices. In general, there were glimpses of light in this interview, and it is even possible that it was really real, but it was subjected to such proofs that the meaning was distorted and the answers to the asked questions became very contradictory. But this was the only way for the seed, everything went much more interesting further, but I would like to deviate a little from the topic and express my opinion about the compliance of the current weapon with modern standards and requirements.

No one will argue that the most discussed topic in the field of domestic firearms is the topic of replacing AK74 and its variants with something radically new. Someone, nodding at foreign models, speaks about the superiority of the younger weapon in the combat characteristics, someone says that the weapon is simply morally obsolete, and it is embarrassing to hold it in service, and someone, on the contrary, says that These machines are the best of the best, and they have no analogues. My point of view on this issue is somewhat twofold, but I think I can express it, having fully argued. For whom was originally created a Kalashnikov assault rifle? That's right, the weapons were created, literally, for the people, so that even the person who holds them for the first time in their lives did not experience difficulties in maintaining the weapons and their exploitation. And this means that such a mass sample should be as simple as possible in construction and as unpretentious as possible, which we managed to combine in one model. But if everything is so good in this weapon, then where is the desire to replace it? And this desire arises due to the fact that, due to its age, this model is not adapted to be compatible with various modern devices that gradually fall into the military environment. But not everyone should use the same collimator sight, so why replace the weapon completely? Give people only what they really need and in no case dispose of, do not sell the old images with which many have served, which have been studied far and wide, let them lie just in case. Maybe modern AK foreign automaton loses in its characteristics, but for universal weapons, in the event of which it is better not to find a weapon. Even if the desire to play with new toys will be so great that AK74 will be completely replaced, in no case can we exclude from the program of its thorough study, even if not in the form of the main weapon. But at the same time, many AK really no longer fit, so that it will still have to partially replace it, whatever one may say. In general, here is a lyrical digression, we come back to the topic of conversation. 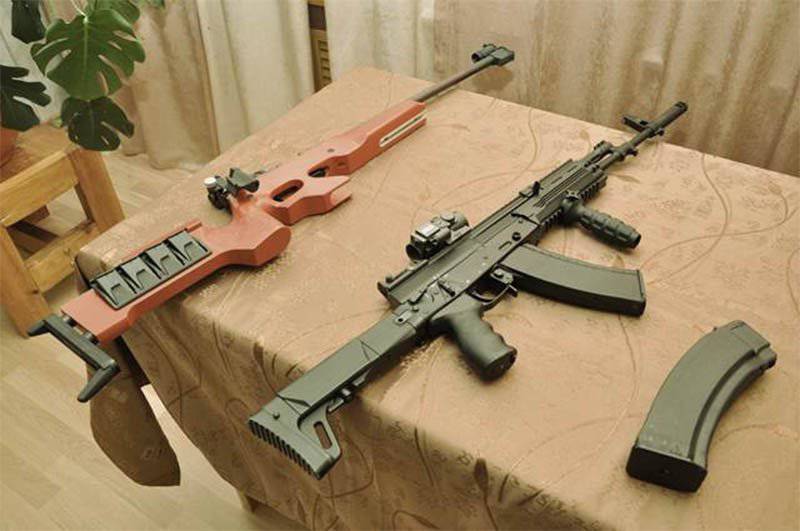 As already noted above, one of the problems of AK74 and its modifications, so to speak, is that the weapon does not have the ability to install modern additional devices, and since the new model is delayed and the people demand at least some gestures, it was accepted A relatively adequate solution is to adapt AKs already in service. It was after such a proposal that Rogozin began ... Remembering that the Ministry of Defense refused to purchase old Kalashnikov assault rifles, the army began to be presented almost unarmed at all, questioned the appropriateness of such an adaptation in general, specialists appeared saying that the weapon would completely change its characteristics the worst side, they remembered the price of the question ... But, roughly speaking, the whole adaptation consists in installing mounting strips of the “picatinny” type. At the same time, Rogozin proposed two adaptation options with 3 fastening straps and seven, if the first option can be performed independently in part, then the second one requires more in-depth intervention. Honestly, I personally am against hanging arms with fastening straps from all sides, but once they decided to supply additional devices to the army, people need to learn to handle and work with them, well, since there is nothing to do with it, then this option will do. It looks more strange that the prices for adaptation were published. So for some reason, the numbers are thoughtlessly reprinted by one edition of another and say that the upgrade in the first version will cost 2000 rubles for the 1 machine, the second is already 10000 thousand rubles. Something tells me that these figures are taken from the ceiling, or it is planned not just to install the mounting strips, but a complete rework from AK74 to some kind of laser rifle or plasma gun, at the worst in AK12. It is clear that it is impossible to simply put or fasten the fastening strap on the glue, but the prices are really very high.

In general, everything is so uneasy here and on paper, which can endure everything, and in life. But after reading everything that was written on this subject, I still found some positive moments. First, modern supplementary devices will appear in the army to facilitate work with weapons. Secondly, the weapon itself will be able to use these devices, even if it is in the form of such a temporary option. Once again, I am convinced that the national press is the most impartial, informative and accurate, and it also makes people think, draw conclusions, analyze information. Maybe this is the whole point? Our newspapers develop the population, while in other countries they simply give ready-made information that you only need to read and perceive as is. Maybe all the same in vain we swear at them for distorting the facts, tearing the words of people out of context, completely changing the meaning of what was said, and sometimes they just lie? Suddenly, they are well-meaning ...