25 September 2012
58
In 2000, the press around the world reported on the use of new by Russian troops weapons. During the fighting for the village of Komsomolskoye (Chechen Republic), self-propelled heavy flamethrower systems TOC-1 “Buratino” fired at the positions of the militants. Soon after these messages, some details began to appear concerning the technical and combat characteristics of the complex. In addition, the high impact effectiveness of unguided rockets caused a specific reaction from some human rights defenders. These people considered the TOC-1 an inhumane weapon and even began to demand from the world community to condemn the actions of the Russian military. Nevertheless, the entire foreign reaction was limited only by restrained criticism and restrained praise. More than ten years have passed since then and the TOC-1 complex, along with its modernization of the TOC-1A, "Solntsepek" continues to be in service with the Russian RCBZ troops. At the same time, the total number of built heavy flame-throwing systems, according to various estimates, does not exceed two to three dozen. Why did the weapons, which received a lot of laudatory reviews and provoked a critical reaction, entered the army in such limited quantities? Let's try to figure it out. 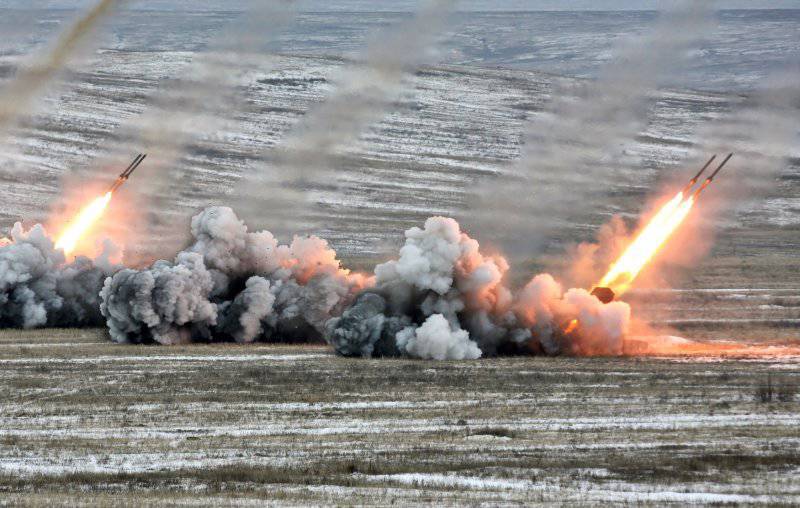 Let's start in order. The basis of the combat vehicle of the TOS-1 and TOS-1A systems is the tracked chassis of the main combat tank T-72. Diesel engine V-46 with a capacity of 700 hp provides mobility and maneuverability to a 46-ton vehicle at the level of other armored vehicles, which allows it to operate as part of mobile strike groups. So, in the course of the already mentioned use of TOS-1 missiles for targets in the territory of the village of Komsomolsky, flamethrower systems were covered by T-72 tanks. Due to the same base and insignificant difference in the combat mass, Pinocchio and tanks did not have any problems in interacting on approaching and leaving the combat position. Modification TOS-1A "Solntsepek" received a new power plant - a diesel V-84MS with a capacity of more than 800 horsepower. This innovation to some extent improved the driving performance of the combat vehicle.

As you can see, the running performance of the Buratino and Solntsepe armored combat vehicles equipped with launchers could hardly have caused a small number of ordered vehicles. Perhaps, claims of the military are caused by other vehicles of the complex? Probably. The initial complex TOC-1 had a transport-charging vehicle (TZM) based on the KrAZ-255B truck. The wheeled chassis was equipped with a cargo crane and devices for the transport of unguided missiles. It is quite obvious that the wheeled chassis of the TZM flamethrower system had not such indicators of speed and maneuverability as the combat vehicle had. For this reason, the upgraded TOC-1А received a new transport-charging vehicle made on the chassis of the T-72 tank. The target equipment of the new TZM was modified accordingly. In addition, special armored jackets were added to the design, closing the missiles from bullets and fragments in the stowed position. Each combat vehicle of the Buratino and Solntsepek complexes is attached with two TZMs with a set of unguided rockets. If necessary, a number of trucks may be attached to the connection of flamethrowers to transport the stock of missiles, but in this case, for security reasons, it is required to bring the missiles to the combat vehicle exclusively on TZM with a closed housing. 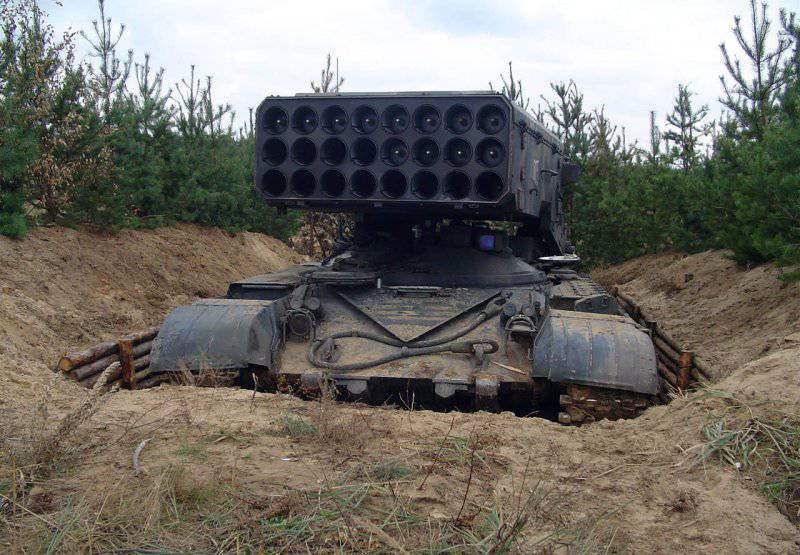 So, all the machines of the complex are maximally unified and protected from enemy attacks. When creating a new version of a heavy flame-thrower system, a number of wishes of the military were taken into account, which, for example, led to a number of innovations related to the level of protection of ammunition and, as a result, machines. The main armament of both complexes - unguided missiles MO.101.04 and MO.1.01.04М caliber 220 millimeters. Both types of missiles are equipped with a volume-detonating or incendiary warhead. The first came projectile MO.101.04. With a length of 3,3 meters, it weighs more than 170 kg and has a maximum range of 3600 meters. The new MO.101.04M rocket is longer (3,7 meters), heavier (217 kg) and flies farther, six kilometers. Missile launch is made from a package of tubular guides. Externally, it is a box inside which are placed "nests" for rockets. On the combat vehicle of the TOC-1 complex there are 30 rails, on the TOC-1А - 24. The package of guides can be induced in the horizontal and vertical planes: the turning mechanism is installed on the seat of the standard turret of the T-72 tank. Vertical guidance is carried out by lifting the entire package.

One of the main differences between the original and the upgraded version of the flame-thrower system is a different number of guides for missiles. The reason for this was the peculiarities of the combat use of the complex. Since the maximum launching range of MO.101.04 type rockets was relatively small, the troops immediately began to take measures regarding the safety of the vehicle and crew. The space-detonating or incendiary warhead, having been damaged on the launcher, can destroy the entire machine. In order to avoid such incidents, even during the first applications of TOC-1 in Afghanistan (late eighties), the crews left the extreme side guides empty. Because of this, the relatively rare fragments and bullets of the enemy had almost no chance of damaging the missiles. Taking into account this experience, the engineers of the Omsk transport engineering design bureau redid the design of the launcher. Firstly, the “loss” of six missiles in practice did not have a significant effect on the effectiveness of the shooting. Therefore, only 24 guides were left. Secondly, the saved volume and weight was given to ensure the protection of missiles. Now the external lining of the launcher is made of armor plates and can withstand the hit of an armor-piercing bullet B-32 (cartridge 7,62х54 mm) from a distance 500 meters. Thus, the combat vehicle of the TOC-1A complex is practically not at risk of destruction as a result of damage to the missile warhead with small arms or splinters, especially when firing the MO.101.04М at a maximum range. With regard to the protection of the chassis and crew, the anti-shell protection of the armored hull of the T-72 tank does not withstand hitting only powerful cumulative and high-speed sub-caliber feathered projectiles. 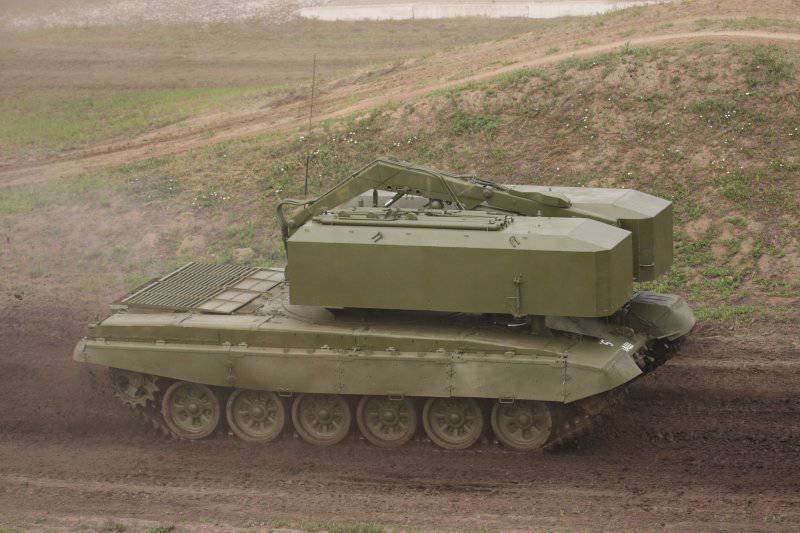 The version of the inadequate protection of combat and transport-charging vehicles can also be deleted. Perhaps, the potential buyer is not satisfied with the fighting qualities of unguided missiles? You can immediately say: and satisfied, and no. Volley the first version of the ammunition - MO.101.04 - ensured the destruction of targets in an area of ​​up to two thousand square meters at distances up to 3,6 kilometer. A full volley when shooting at a maximum pace takes between six and twelve seconds. In terms of its effectiveness, a salvo of one combat vehicle is equal to the relatively long work of an artillery battery. At the same time, "Pinocchio" and "Solneptek" have no sufficiently large range of compatible ammunition: only incendiary and thermobaric. In some cases, the action of such combat units is insufficient, for example, when it is necessary to destroy any structure. This requires a direct hit of the projectile inside the target, followed by an explosion. Such features of the warheads of the MO.101.04 and MO.101.04М missiles severely limit the range of their use, although they increase the area of ​​destruction. The second problem of unguided rockets was their relatively short range. 3600 meters of the first version of the MO.101.04 missile were considered to be too short a range, especially in comparison with other multiple launch rocket systems. In the face of a collision with a seriously armed enemy, the use of TOC-1 or TOC-1А is a rather difficult task. With proper organization of interaction between units, the enemy, if it gives the combat vehicle a chance to enter the position, it will not allow launching. In this regard, heavy flamethrower systems again lose the "classic" MLRS. Thus, the Smerch 9K58 complex with the 300-mm 9М55С missile with a thermobaric warhead is capable of hitting targets from 25 to 70 kilometers, without endangering itself to return fire. At the same time, the warhead of the 9М55С rocket weighs a quarter more than the entire MO.101.04M rocket of the Solntsepe complex.

So, we have found that stumbling block that hinders the mass production of heavy flame-throwing systems and the equipping of troops with them. This is a specific ammunition, not giving the possibility of widespread use. Yes, in its combat effectiveness, it exceeds a number of other similar systems. But the price of this is the short range, the risk of catastrophic consequences if the ammunition is damaged, and the need for serious cover on the position. All these factors seriously reduce the possible conditions for the use of heavy flame-thrower systems. And the small range of available warheads for missiles is not conducive to frequent use. The combination of the pros and cons of the TOC-1 and TOC-1A systems makes it possible to give an approximate representation of the “ideal” situation in which the use of heavy flame-thrower systems will be reasonable and effective. This is the shelling of areal targets from a relatively short distance. In addition, the attacked enemy must have relatively weak training and not have serious anti-tank weapons or artillery. Thus, the ideal task for “Pinocchio” or “Suntsepek” is to strike at a camp or convoy of vehicles of a weak army or armed gangs. When using new shells MO.101.04M increased range, the general features of a hypothetical volley remain the same. 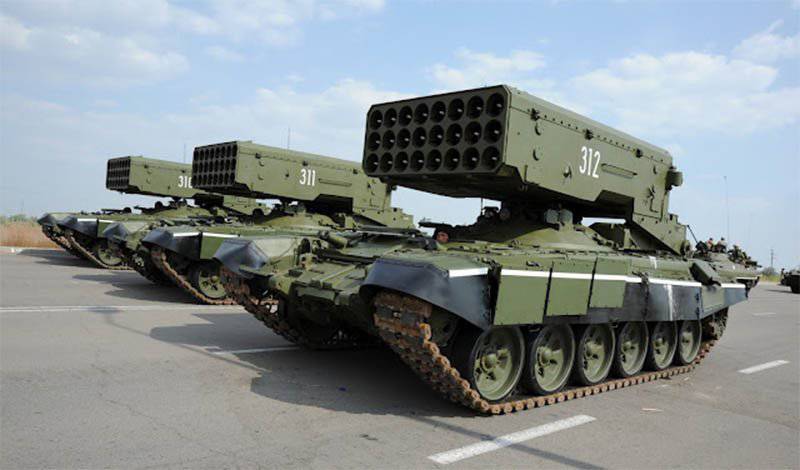 In general, in the case of the heavy flamethrower systems “Buratino” and “Sunlight”, we observe a specific situation. An interesting and undoubtedly promising project in practice turns out to be rather poorly adapted to real combat operations and requires the involvement of additional forces. Another reason why TOC-1 and TOC-1A were not ordered in large quantities relates to the specific tactical niche of the complexes. Of course, if necessary, it would be possible to increase the firing range of flame-throwing systems. But in this case, they will "overlap" with the existing MLRS. Meanwhile, purchases of new multiple-launch rocket systems continue, which cannot be said of heavy flame-throwing complexes. Thus, the only suitable tactical niche for heavy flame-throwing systems remains small special operations, where rapid deployment and immediate destruction of manpower and poorly protected equipment over a relatively large area are required. At the same time, the very idea of ​​a special salvo fire system for RCBZ troops is interesting and, possibly, promising. For example, MO.101.04 missiles can be equipped not only with a volume-detonating or incendiary warhead. On the basis of this munition, a special projectile can be created, carrying a mixture to extinguish fires. With such use of heavy flamethrower systems (it sounds ironic - fire extinguishing with the help of a flamethrower system), there is no need to provide fire cover for the combat vehicle, and all the advantages remain in full. Similarly, TOC-1 and TOC-1A are capable of eliminating small clouds of toxic substances or similar aerosols. However, the authors of the projects of heavy flamethrower systems have not yet presented alternative projects for their use and, it seems, do not even have such plans.