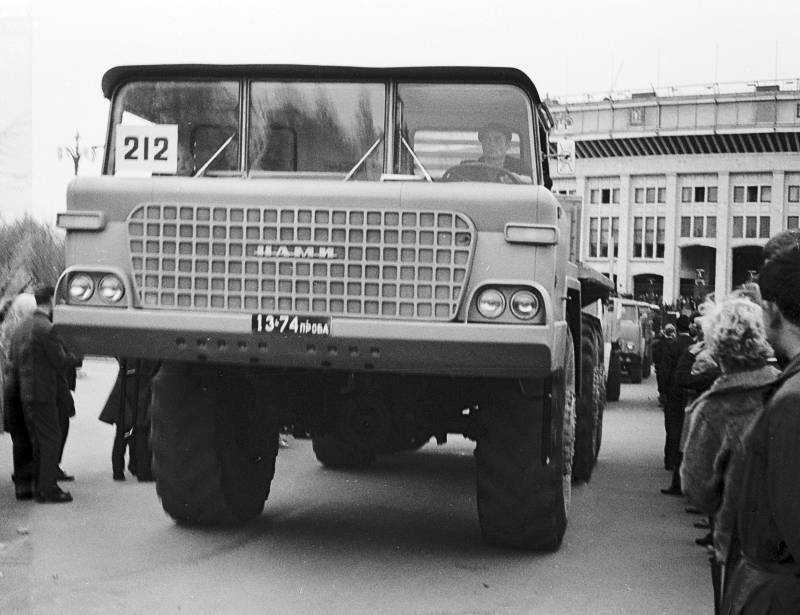 The birth of the concept of the three-axle NAMI-076 was associated with the fashionable foreign trend in the construction of giant desert ships. The first roles were French cars designed to work in the African colonies. These were bonnet trucks, often of cyclopean dimensions, for example, the Berliet T100.

A machine with a gross weight of 100 tons appeared in 1956 and was intended for the needs of oil companies. The idea cannot be called particularly successful - only four trucks were built, which, however, proudly bore the title of "the greatest car in the world." But as an example for the development of the Soviet giant, it was decided to take a much more mundane 25-ton Willeme W8SA model of 1954. The NAMI off-road vehicle department even received a French truck for comparative testing.

But there is no need to talk about direct copying of foreign analogues by Soviet engineers - for the future Yermak they chose a progressive layout for their time with a cabin shifted forward beyond the wheelbase. The Willeme W8SA chosen for comparison was a classic 6x6 bonneted truck with wide tires, powerful air conditioning (working in the desert after all) and an advanced cooling system for a 250-horsepower diesel engine. 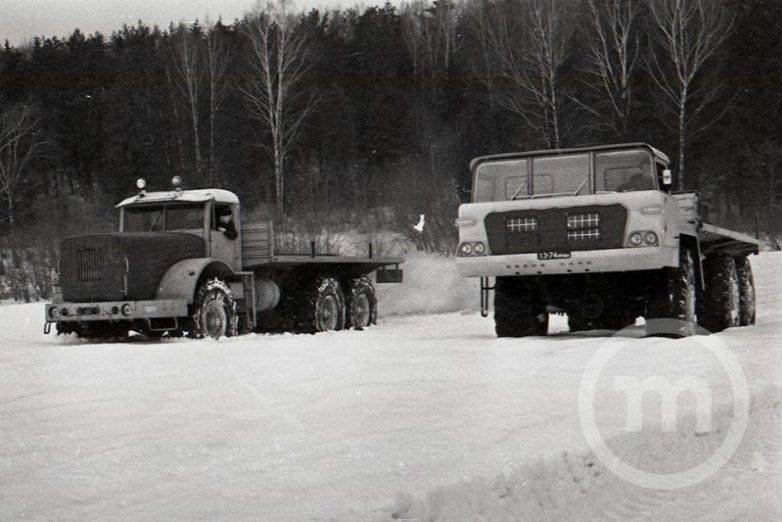 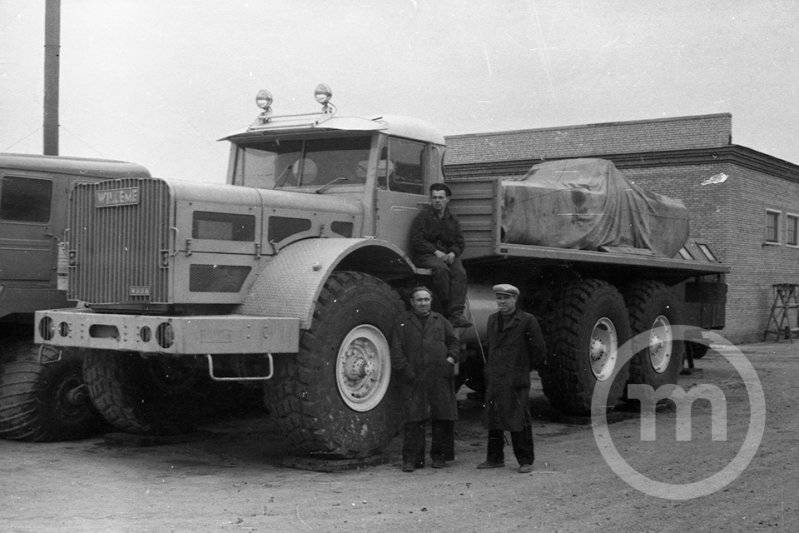 Willeme W8SA and NAMI-076 "Ermak" in comparative tests
NAMI-076 "Ermak" not only for the Soviet Union, but for the world industry was a modern, if not breakthrough, machine. It was distinguished by four-wheel drive with a second axle through passage and a three-speed hydromechanical gearbox, partially unified with its analog from the BelAZ-540 quarry. Given the expected specifics of the work of "Ermak", special attention was paid to the cooling of transmission oil. NAMI engineers equipped the truck with water-cooled disc brakes. This was a revolutionary solution, which, however, was later abandoned in favor of shoe brakes with a pneumohydraulic drive.

It's amazing how different information can be regarding the technical features of Yermak. A lot of quite respectable automotive publications are still spreading the myth about installing a tank engine on a truck. NAMI specialists perfectly understood the limitations of the V-2 combat diesel engine in terms of resource (albeit in a derated version), so they would never have decided on such a simplification of the design.

Therefore, initially, Yermak received a 300-horsepower YaMZ-238N, the power of which made it possible to transport up to 25 tons on hard ground, 20 tons on sand and 15 tons off-road. At the same time, it is important to understand that in the curb condition the truck pulled 21 tons, which is less than the mass of the cargo, and this is a very progressive parameter for the early 60s of the last century.

In the Soviet table of ranks, NAMI-076 received a special place. The largest four-wheel drive truck of the classical layout in the USSR at that time was the KrAZ-214, capable of taking on board no more than 7 tons, while it itself weighed more than 11 tons. All this meant that Yermak alone could replace two or even three KrAZ trucks in the supply chains. There were simply no analogues of this machine in the USSR. Unless, of course, we take the MAZ-537 tractor, which can be very conditionally attributed to mass equipment, given the complexity of operation and the low resource of a tank diesel engine.

You can also cite the Moscow four-axle ZIL-135, but in this case, the civilian use of an expensive and complex SUV was very conditional. The twin-engine layout, coupled with a system of steered wheels on the front and last axles, was worth something. 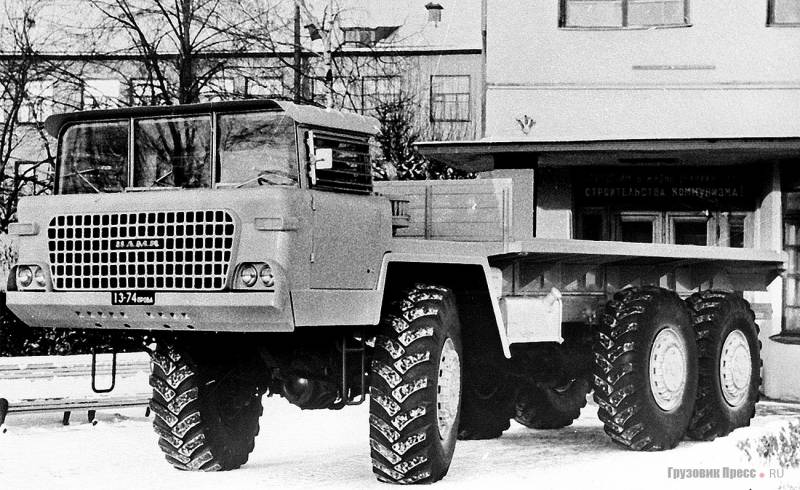 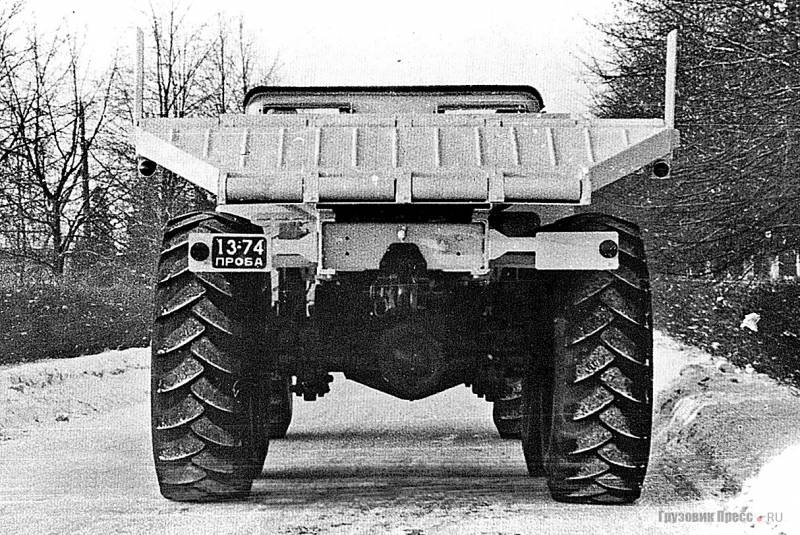 NAMI-076M. Source: gruzovikpress.ru
At the same time, the developers of the NAMI off-road vehicle department immediately proposed three versions of the Yermak - in two-, three- and four-axle versions. In the performance of 8x8, the NAMI all-terrain vehicle was already becoming a direct competitor to the MAZ-537, which by the beginning of the 60s was already being produced with might and main.

The Moscow version looked much more perfect - the engine power was 650 hp. With. against 525 l. With. at MAZ-547, and the load capacity is up to 40 tons (for a Minsk tractor, the load on the saddle is not more than 25 tons). However, MAZ's competitor did not even appear as a prototype.

In metal "Ermak" was born in 1963 in a triaxial version. It was a giant with a length of more than 10 meters and a width of more than 3 meters, designed to work in the deserts of Central Asia and in the oil fields of Western Siberia. On tests, he overcame snow up to one and a half meters deep. However, from the very beginning, the true purpose of the projected Yermak was not fully understood. 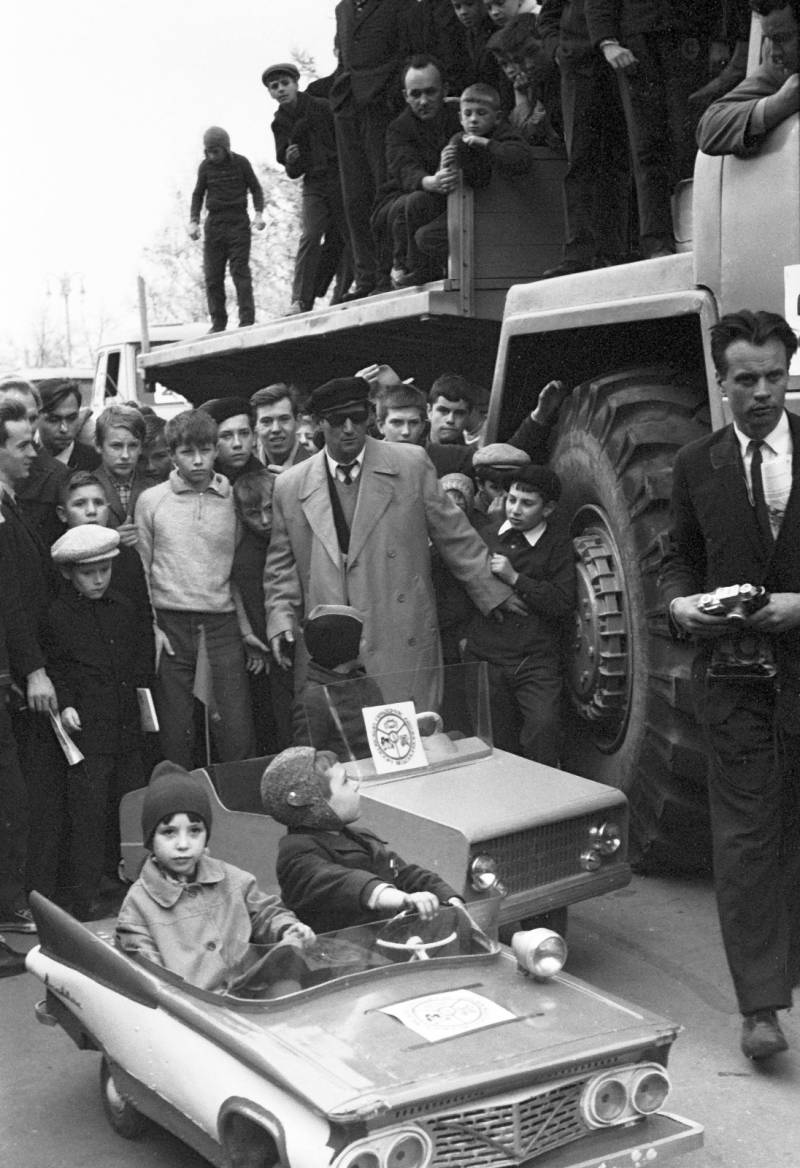 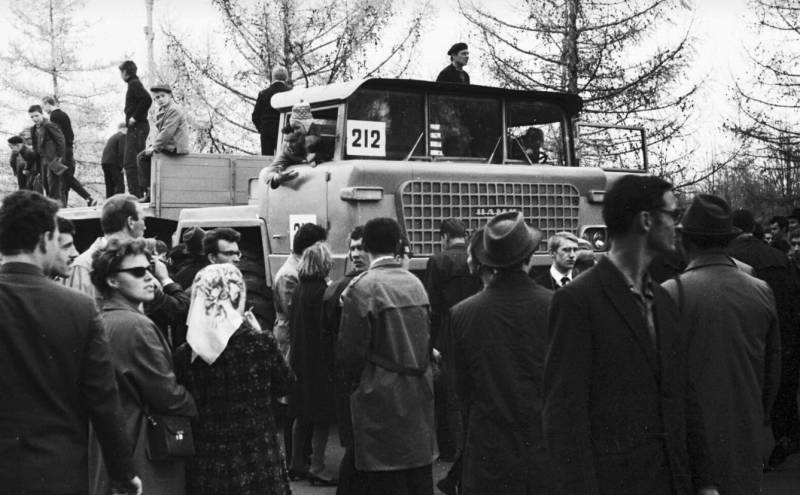 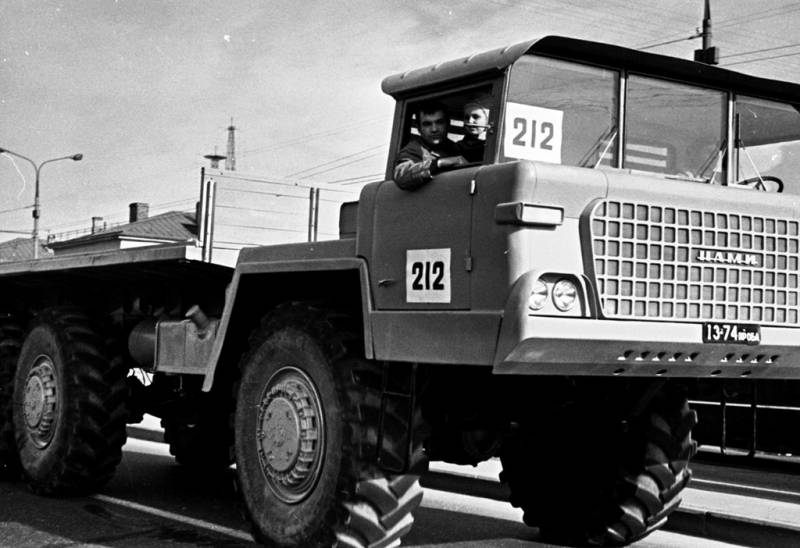 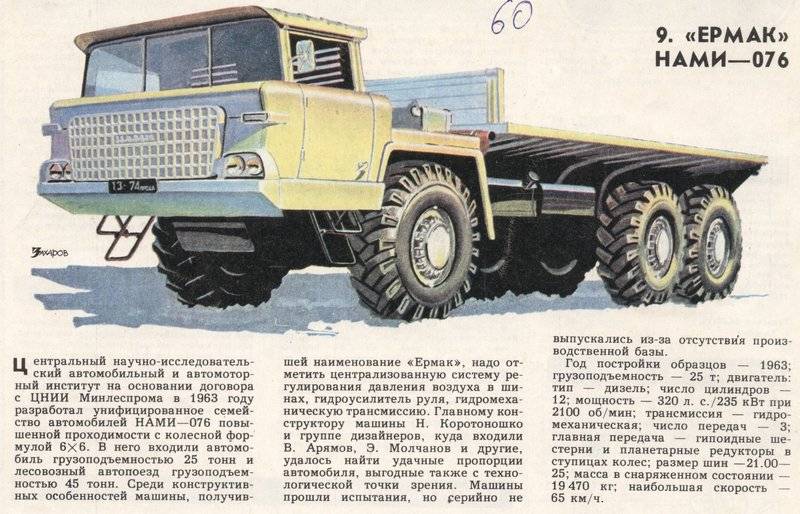 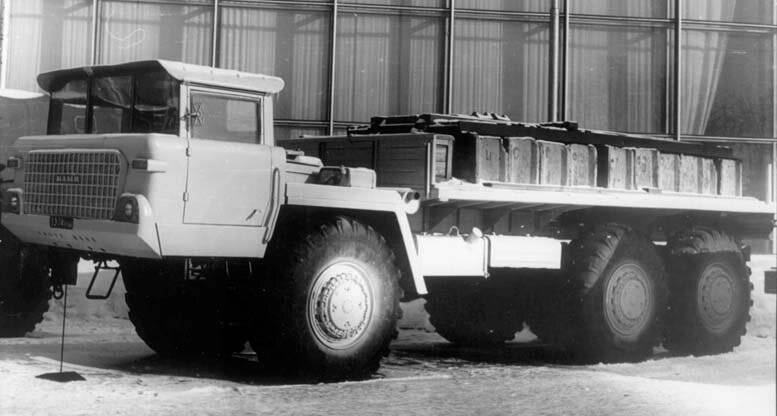 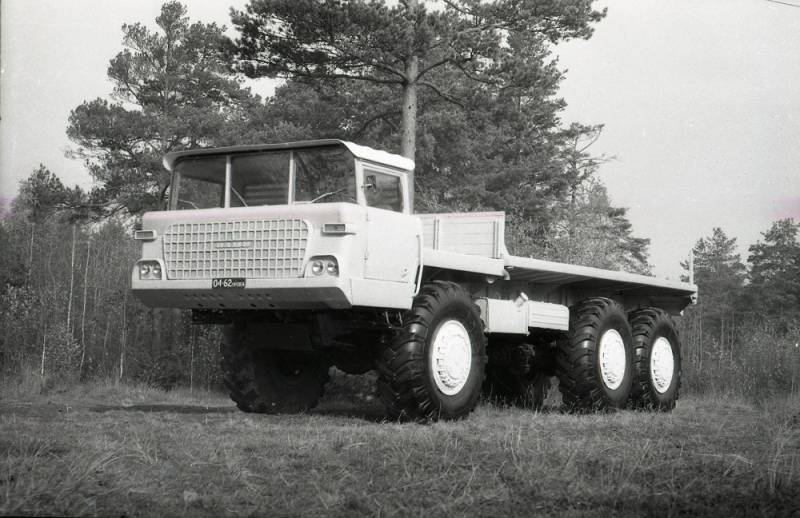 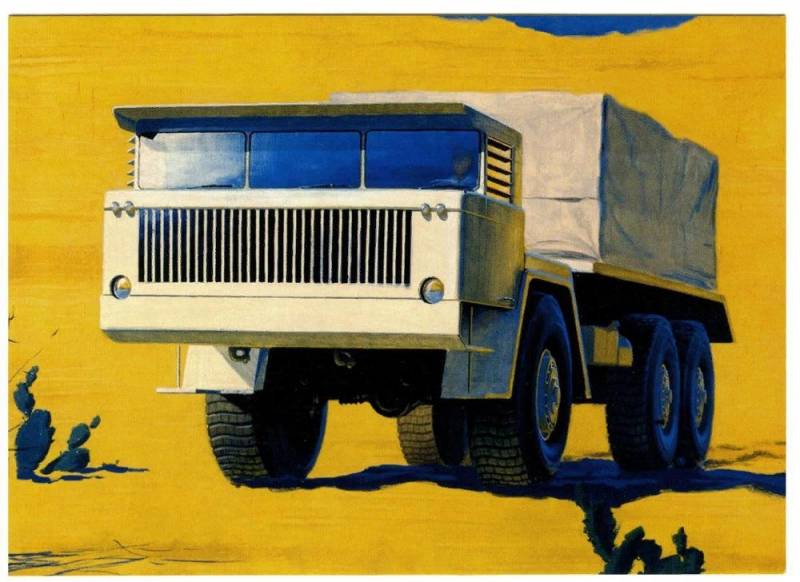 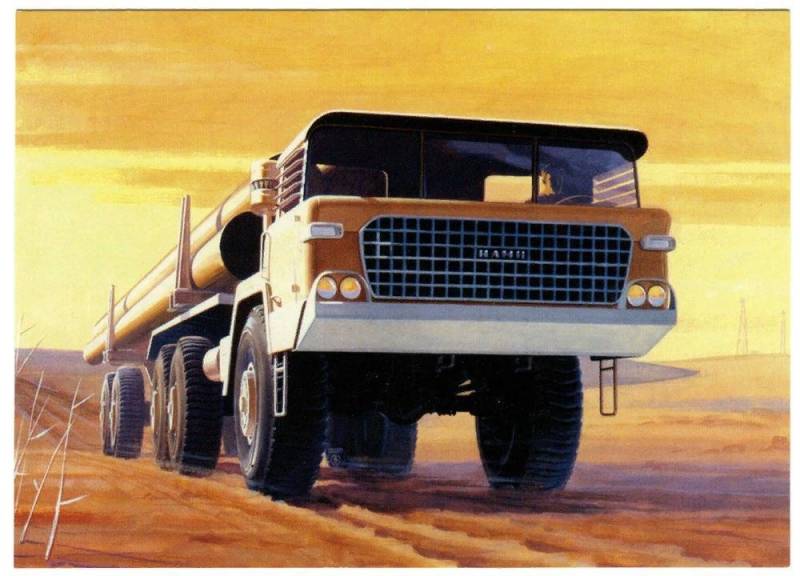 "Ermak" in various periods of its existence. Unfortunately, the machine stories remained only in the photo and drawings.
The car was simultaneously adapted for the conditions of the cold north and the sultry south. The cockpit windows were double, developed thermal insulation was mounted, and the side windows were prudently closed from the sun by blinds. The heavy truck was not suitable for the Soviet army because of its gigantic dimensions and incomprehensible functionality.

By that time, all the needs for military tractors were covered by KrAZ, the latest Urals and ZiLs. NAMI-076 was, of course, good on rough terrain and in terms of carrying capacity, but in terms of dimensions it was not suitable, perhaps, for any army in the world. "Ermak" with a three-meter height theoretically was not included in any, even projected, transport aircraft.

Therefore, NAMI began to look for a customer.

Since no one needed the onboard Yermak, NAMI engineers turned to the Central Research Institute of Mechanization and Energy of the Forestry Industry. Simply put, they tried to attach a giant to forestry. To do this, the car was converted into a timber road train with a carrying capacity of 45 tons, which, however, proved to be imperfect. The brakes were not effective enough, and the motor was weak.

NAMI began large-scale alterations - they mounted a 12-cylinder 320-horsepower diesel engine, and, as mentioned above, they installed shoe brakes. By the way, the brake drum of the Yermak updated in 1968 turned out to be a record diameter for its time - 510 mm. Friction material for brake linings was specially developed at the Tambov plant of asbestos products.

The hydropneumatic brake drive was unified with a similar Ural-375 system, which was previously developed at NAMI. However, this machine, known as NAMI-076M, did not find serial implementation - the country did not have a decent production base for such a complex design. 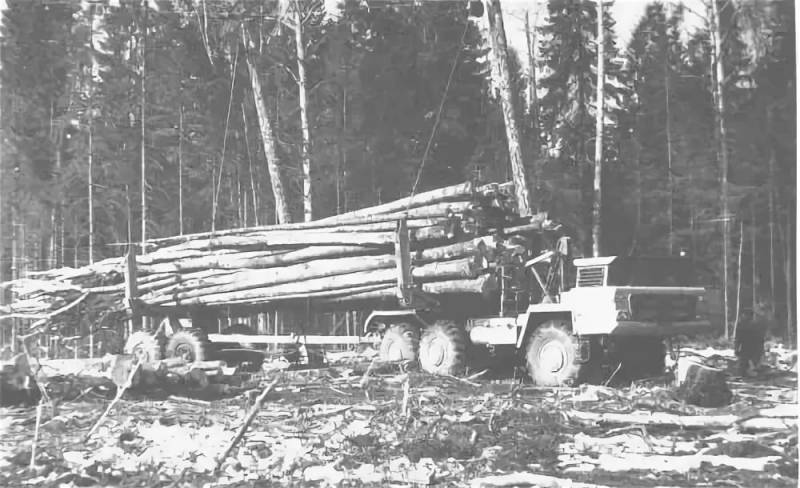 "Ermak" - timber carrier.
Hope appeared only in 1969, when the MoAZ automobile plant in Mogilev received the task of mastering a logging road train with high cross-country ability and a carrying capacity of up to 50 tons.

As a result, NAMI had to reshape the Yermak design for the third time.

It didn’t work out very well, mainly due to the requirement of the Ministry of Automotive Industry to “develop the chassis of the tractor with the widest use of units of existing production.” All the innovations of engineers that were implemented in NAMI-076M turned out to be out of work, and the resulting monster MoAZ-7411 turned out to be a frankly overweight machine.

The timber carrier was built in 1974 and in terms of curb weight exceeded the "Ermak" immediately by 7 tons! Naturally, this mass was taken away from the carrying capacity of the truck, and the resulting product no longer interested anyone - the tactical and technical requirements of the Minavtoprom were not met. Even the powerful 500-horsepower YaMZ-240N diesel engine did not help, which was replaced by the previous one with 320 liters. With. 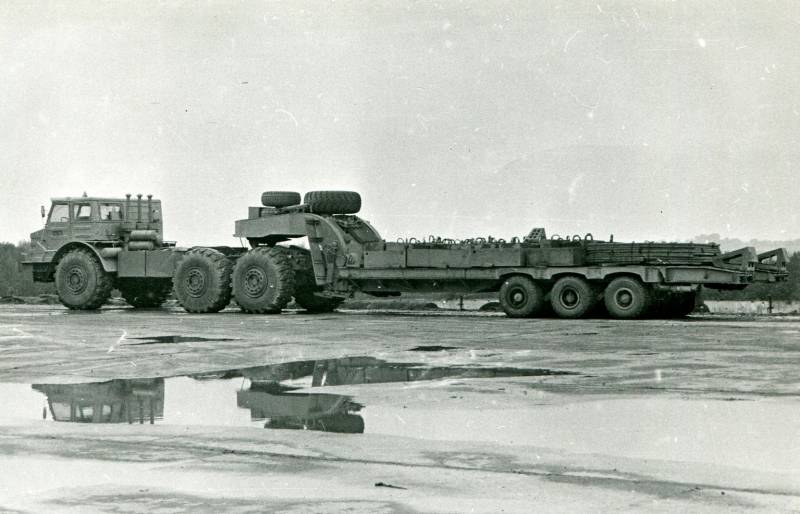 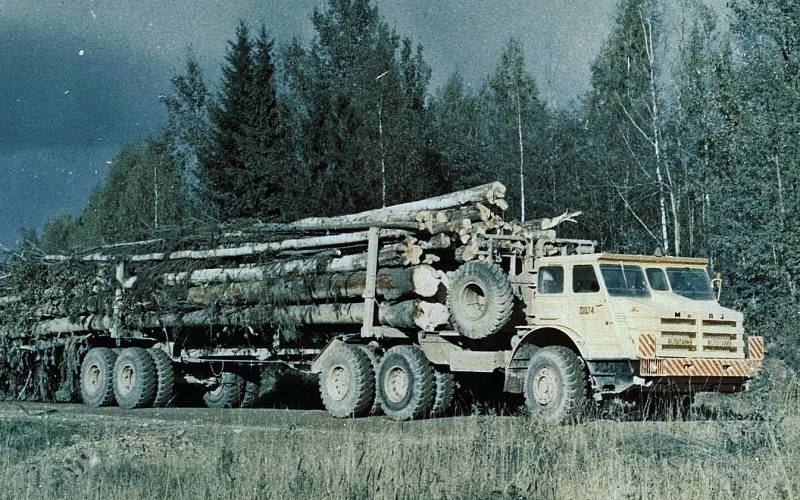 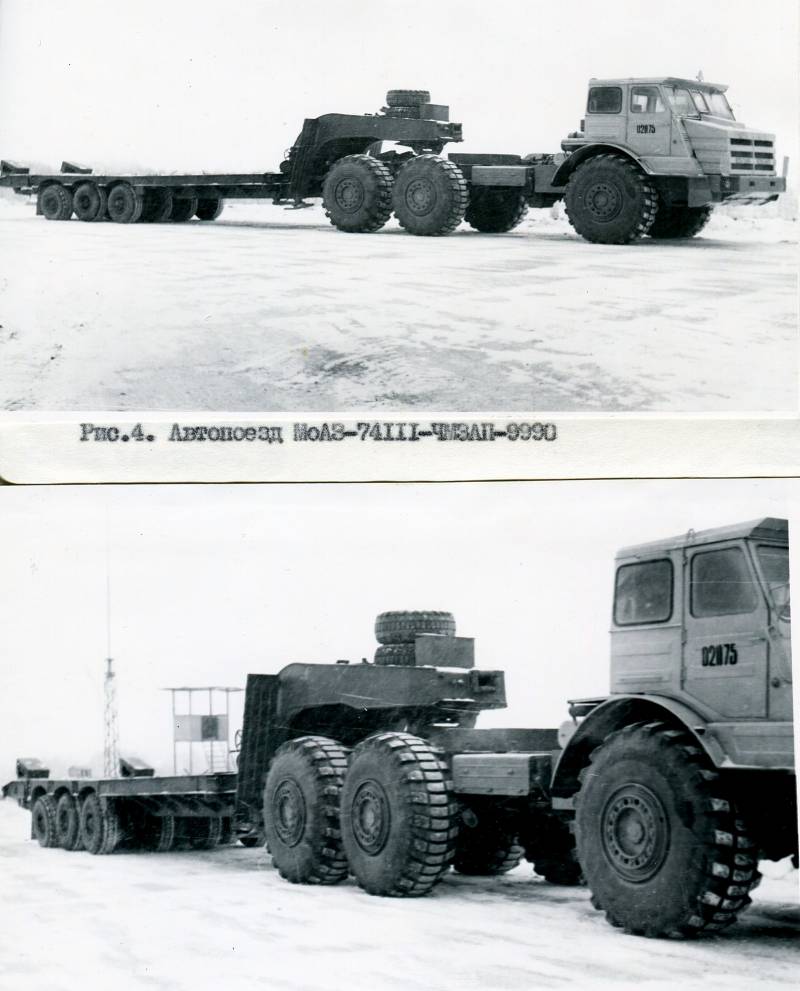 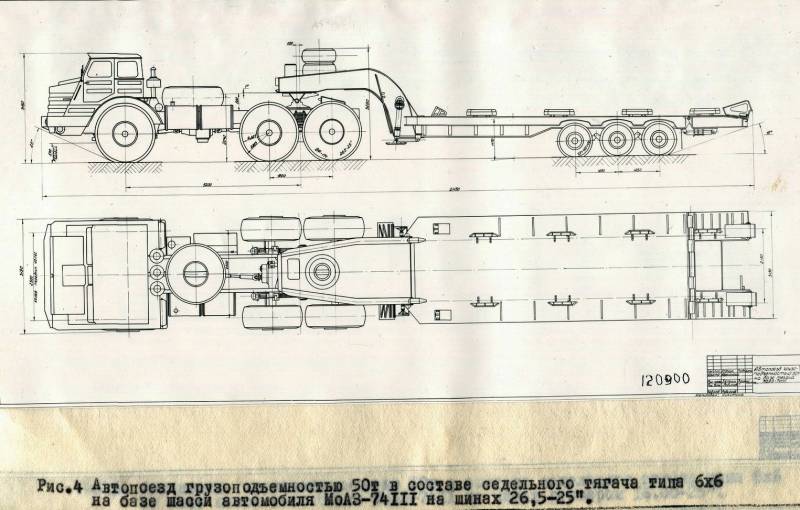 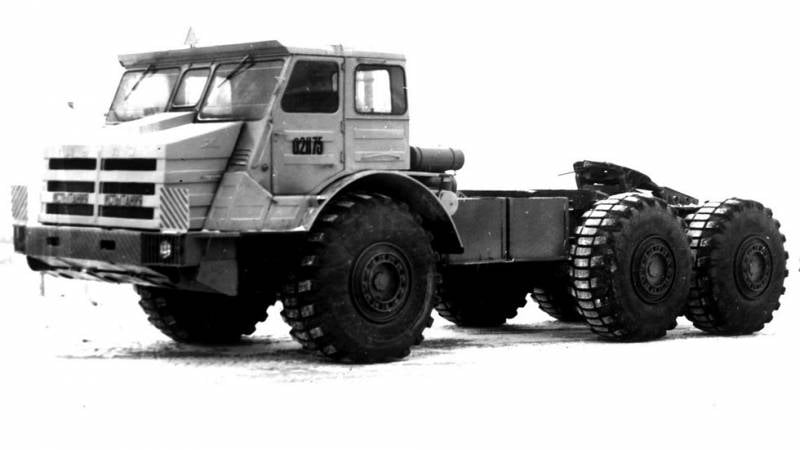 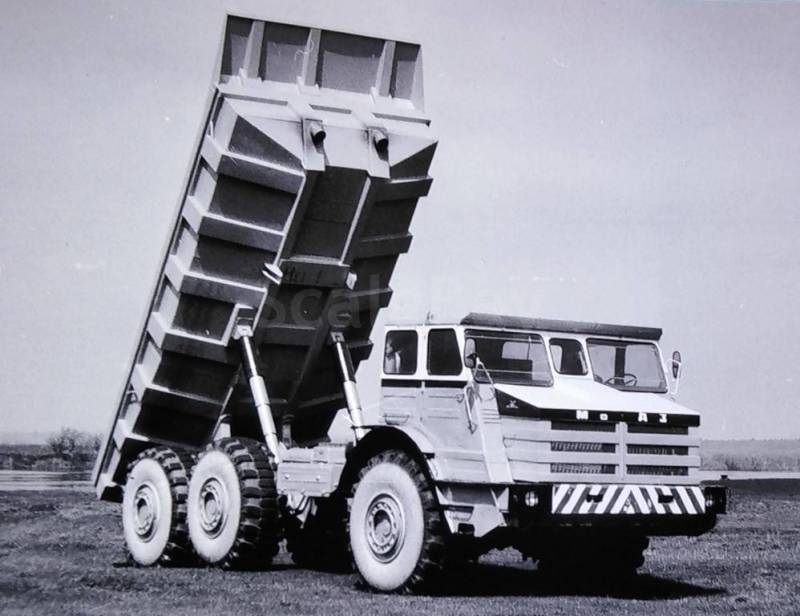 MoAZ-7411 is an example of a regression of the automotive concept. The Mogilev tractor differed from NAMI-076M in a larger curb weight, which did not allow it to meet the tactical and technical requirements of the Minavtoprom. Simply put, the tractor managed to become obsolete even at the testing stage. The photo shows various generations of MoAZ, built on the basis of Yermak.
There were attempts to build a tank carrier on the basis of the Mogilev tractor, but the military already had their own MAZs, albeit less perfect ones.

Finally, the hope for the implementation of the concept of "Ermak" in the serial incarnation disappeared after the construction in 1976 of the MoAZ-7411 timber carrier with double rear axle tires. The engineers tried to increase the carrying capacity of the tractor by reducing the cross-country ability, but this option was also rejected.

NAMI-076 "Ermak" is a typical example of the isolation of the scientific and engineering potential of the Soviet Union from production capabilities. The car, in many respects ahead of the global auto industry, turned out to be too complicated for the industry.

The cool attitude of the military towards Yermak also played a significant role here - if the army really needed the tractor, it would inevitably be brought to the series, albeit at the cost of some simplifications.

Unfortunately, the "live" artifact of the machine was not preserved for posterity, clearly illustrating the potential of Soviet engineering, capable of creating masterpieces without foreign components.