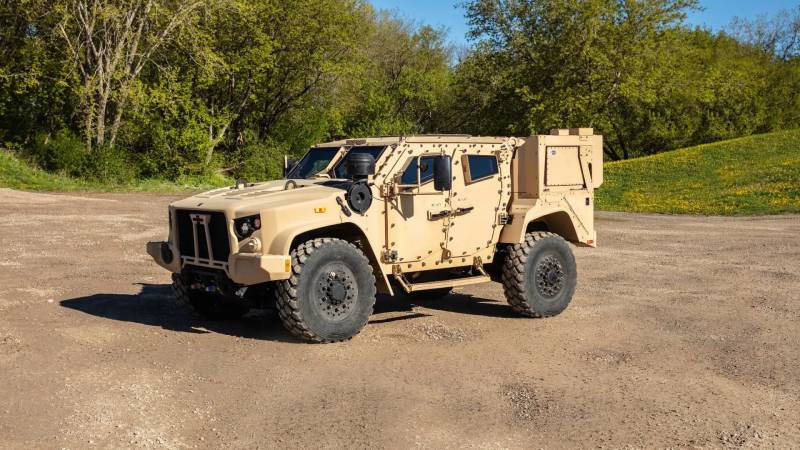 The American company Oskosh Defense continues the serial production of JLTV armored vehicles, and at the same time is engaged in their further development. The other day, she introduced a new version of such a machine, characterized by the use of a hybrid power plant. The upgraded eJLTV armored car retains all the main features and characteristics of the base sample and at the same time receives new features that may be of interest to the customer.

A new model of armored vehicles was officially presented on January 25th. Due to known limitations, the presentation was held online; a press release with the necessary information was also published. Oshkosh Defense spoke about the progress and basic principles of the eJLTV project, and also showed a prototype and revealed its features and benefits.

Oshkosh Defense reportedly has extensive experience in the field of electric and hybrid propulsion systems. For a long time, the necessary studies were carried out, and various experimental samples were built and tested on existing platforms. Now all this experience has been applied to the JLTV armored car.

The eJLTV project is an initiative development and was created without an order from the Pentagon or other structures. It is positioned as an average modernization of an existing model, which provides a number of new features. With its help, a potential customer will be able to relatively easily and cost-effectively "electrify" his fleet of armored cars. 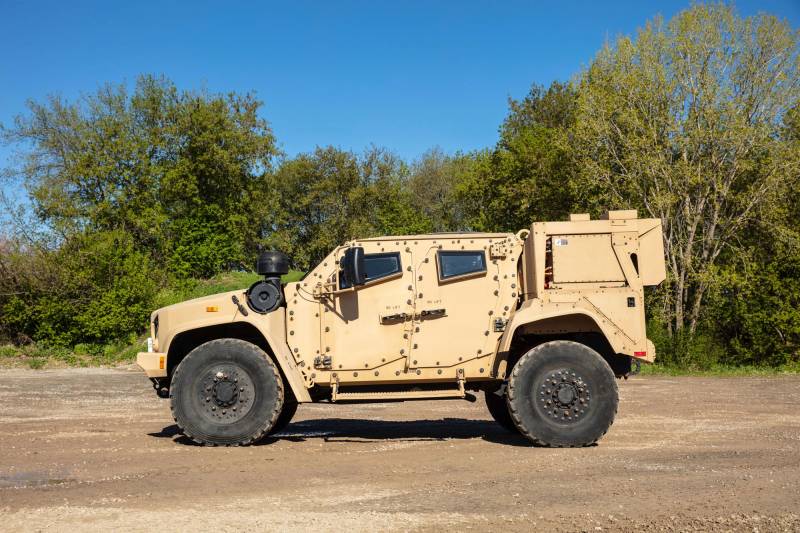 The hybrid armored car retains all the main features and performance characteristics of the base model. At the same time, it acquires the useful qualities characteristic of electric vehicles. So, there is the possibility of silent movement and improved economic performance. In the parking lot, the car can perform the functions of a power plant.

A promising project has already been brought to the test of a prototype. An armored car with a non-standard power plant is tested on different tracks and in different conditions. At the same time, not only driving characteristics are studied, but also its ability to solve fundamentally new problems.

The eJLTV prototype shown does not differ externally from the serial armored car and retains all the main structural elements. New units are placed under the hood and on the rear cargo platform. Unfortunately, the development company does not name the exact composition of the units, their layout and characteristics. At the same time, the main advantages and capabilities of the armored car are revealed.

The hybrid setup for the eJLTV is based on a diesel engine; perhaps this is a regular engine of a serial armored car. The engine is connected to a high power generator which powers the traction motor and/or charges the lithium ion battery. The prototype uses a 30 kWh battery that takes at least half an hour to charge. In the future, the battery capacity will be increased. 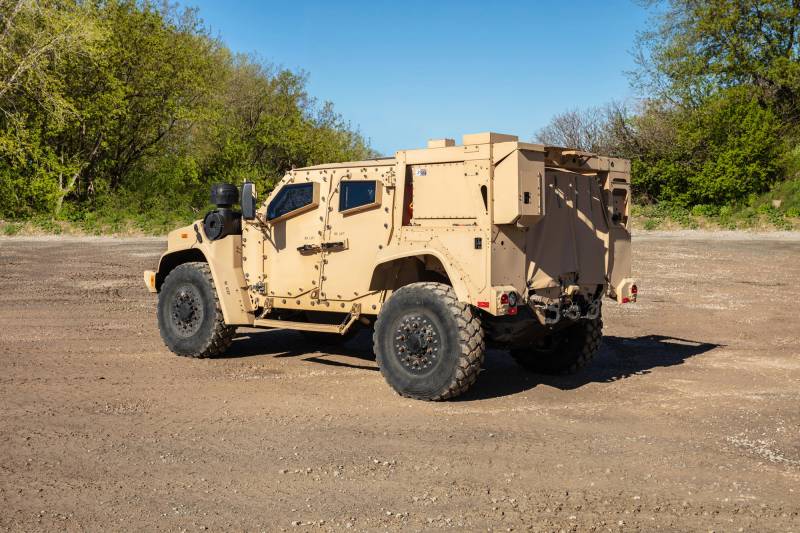 The power plant has several modes of operation. So, the diesel engine can work constantly or only when it is necessary to recharge the batteries. Diesel or just battery can be used for propulsion. In the latter case, the acoustic and infrared signature of the machine is reduced, but the cruising range drops sharply.

The generator has a significant power reserve that can be used for various purposes. Depending on the requirements of the customer, eJLTV can carry one or another equipment with high power requirements. In particular, sophisticated electronic equipment or even combat lasers can be installed on an armored car.

The armored car can serve as a mobile power plant. In the parking lot, without consuming energy for its own needs, it is capable of delivering up to 115 kW of power to third-party consumers. If there is interest from customers, the development company is ready to create systems for power distribution, chargers, etc.

Way to the market

To date, Oshkosh Defense has completed the design of the eJLTV hybrid armored vehicle, built one or more prototypes, and is now testing and fine-tuning them. In the near future, development work will be completed, and the armored car will be ready for mass production. 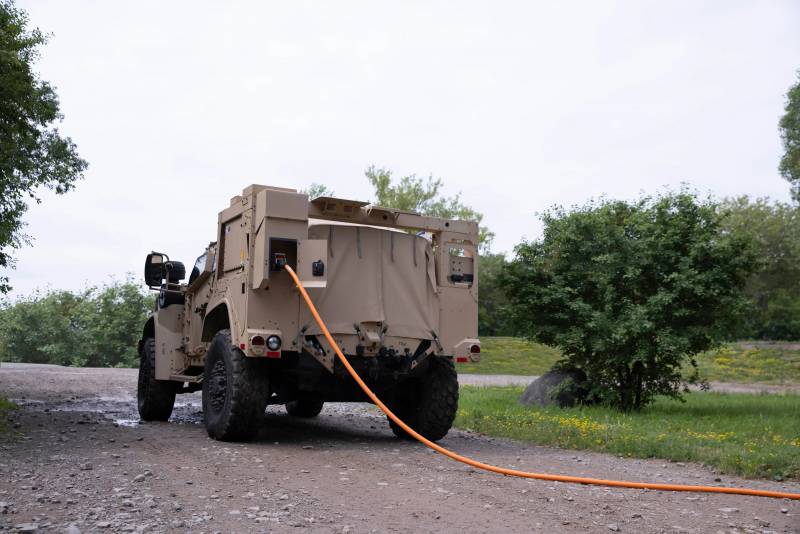 Hybrid armored car as a power plant
However, the commercial prospects of the project remain unknown. It was created on its own initiative, without an order and taking into account the technical requirements of the Pentagon or other structures. The project is not included in any army programs and is unlikely to be included in them. All this leads to known risks, and eJLTV may not receive the desired attention from the most profitable customer.

However, the development company is already making plans for the future and expects to get lucrative contracts. In the near future, she is going to establish contact with the leadership of the ground forces and marines. These types of armed forces actively use wheeled armored vehicles, incl. armored vehicles JLTV, and perhaps a hybrid version with new features will also be of interest to them.

Until such a decision is made, Oshkosh Defense intends to continue work on eJLTV and hybrid technologies in general. The project will be completed anyway. And if the army wants to purchase hybrid armored vehicles of this type, the development company will be ready to start their mass production.

In parallel with the development of a new armored car, Oshkosh Defense continues to produce the base vehicle. It is now completing a current major contract signed several years ago. The last batches of equipment will be handed over to the customer in the coming months, and then the prospects for production become foggy.

Based on the results of past practice, the Pentagon is going to reorganize the production of JLTV armored vehicles and hold a new competition. In September, the winner of the tender will receive a contract worth $6,5 billion to build 15,5 armored vehicles over five years. There are also several options for the following years. 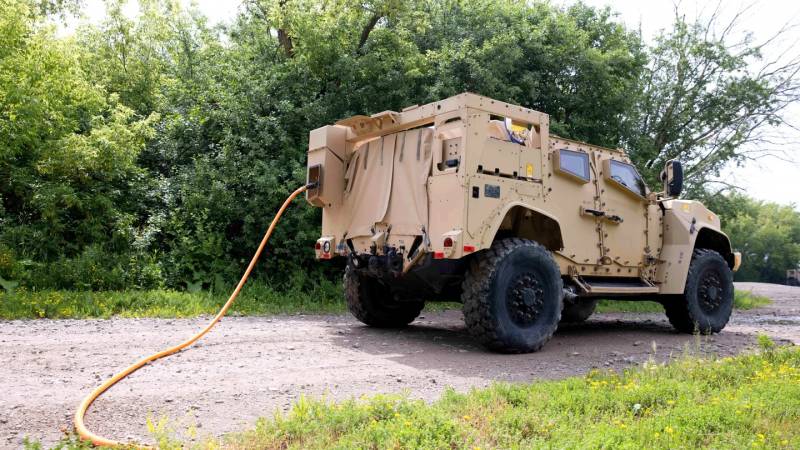 The developer company will certainly take part in the new competition and will do everything possible to obtain a lucrative contract. By offering the best possible terms, it will be able to keep JLTV's mass production in the original version and make good money from it. Then the issue of hybrid modification can also be resolved.

Recently, the Pentagon has shown real interest in new technologies in the field of transportation. In order to optimize the economic, technical and environmental parameters of technology, new research and projects are being launched. The first results of these works are expected in the troops over the next few years. The industry represented by leading enterprises with extensive experience is also interested in this area, primarily in connection with the possibility of obtaining profitable orders.

Oshkosh Defense is no exception and now offers its own initiative development. Her project involves combining new technologies with a finished armored car, which in theory gives it certain advantages. However, characteristic factors may interfere with this project.

At the moment, the future of the eJLTV hybrid armored vehicle remains uncertain. He has a chance to move beyond experiments and get into the troops, but a negative scenario is not excluded. However, Oshkosh Defense can already speak of technical and scientific success. Regardless of further developments, she has already gained experience and created developments in a promising area that she can apply in future projects.