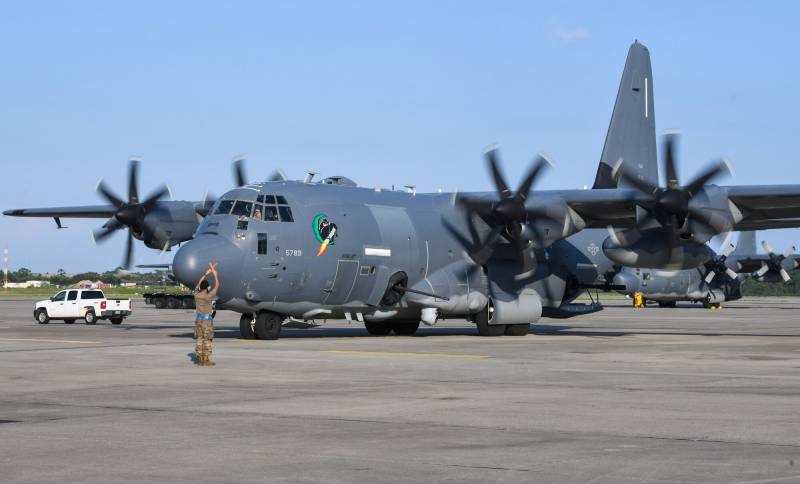 Fire support aircraft of the latest modification AC-130J Ghostrider
Fire support aircraft AC-130 of the latest modifications carry rocket and artillery weapons of various types. Some of the samples used are already outdated and need to be replaced as soon as possible. In order to carry out such an upgrade, a new artillery mount with a 105-mm howitzer has recently been developed. It has passed part of the tests, and in the near future the process of re-equipping combat aircraft will begin.

Since the beginning of the seventies, the “main caliber” of AC-130 aircraft of all modifications has been the 105-mm M102 howitzer with M137A1 recoil devices. For mounting on an aircraft, the existing towed gun was stripped of its carriage and some other parts, and also equipped with new units. In this form, the howitzer is still used and shows the required fighting qualities.

By the middle of the 102s, the MXNUMX field gun was morally and physically obsolete, which is why it was decided to decommission it. To date, only a limited number of such howitzers remain in the US armed forces, with the bulk of them concentrated in the Air Force and used on gunship aircraft. 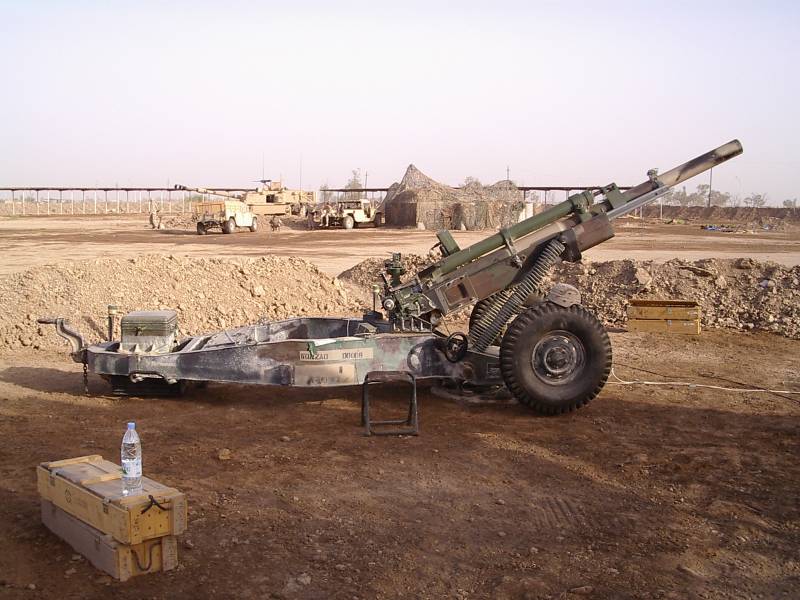 M102 towed howitzer
It should be noted that the Air Force also planned to remove the old howitzers from service. The latest AC-130 modernization projects included the abandonment of the gun mount and replacement with another weapons. In accordance with this decision, part of the aircraft lost M102 products, but in the middle of the tenth years it was decided to return them. Practice has shown that the absence of a large-caliber gun makes the aircraft less flexible and effective means of support.

However, along with howitzers, characteristic problems and difficulties remained. Products M102 and M137A1, as well as spare parts for them, have not been produced for a long time, the resumption of production is impractical, and stocks are coming to an end. The only reasonable way out of this situation was to develop a new gun mount with the required characteristics, using only available modern components.

Work on the new weapons system started in the recent past and was carried out with secrecy. The existence of such a project, and at the same time about its successful implementation, was told only a few days ago. The first reports of a new howitzer appeared on January 11, and one of the Navy units published them. 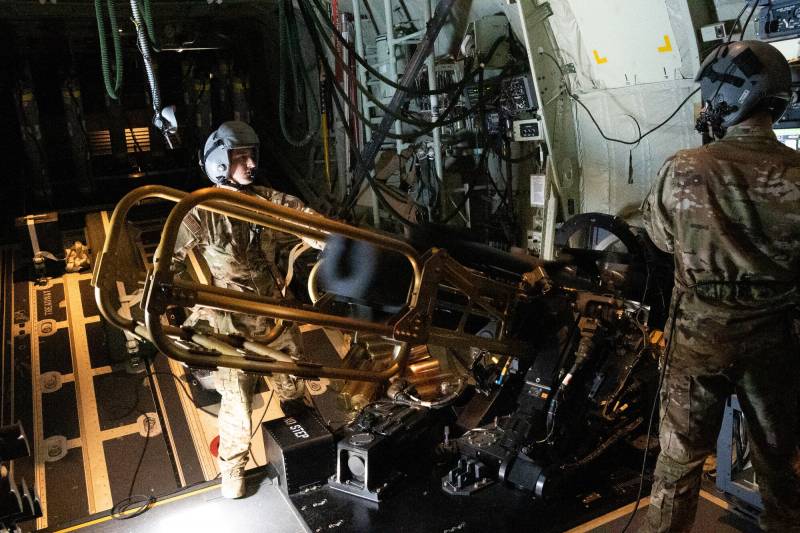 Modified gun on the plane
To develop a new weapon for aircraft, the Air Force turned to the naval forces for help. The design was entrusted to the engineering center Naval Surface Warfare Center Dahlgren Division (NSWCDD), which has extensive experience in creating artillery systems for mobile platforms. This experience was now planned to be used to rearm the "land" aviation.

It is reported that the Air Force and the Navy have organized a fruitful cooperation. NSWCDD designers, Air Force pilots and technicians maintained constant contact and made visits to allied facilities. Future operators actively participated in the design of the gun and its subsequent testing. Such interaction made it possible to fully solve all the tasks set and received high marks.

A new project at NSWCDD developed a new howitzer and auxiliaries for the AC-130. The first sample of the system was also manufactured and tested. After testing at the site, it was handed over to the customer. In the near future, the artillery mount will be mounted on a regular carrier of the AC-130J modification for new tests.

In the official announcement of the completion of the project, the howitzer is designated as 105mm Gun Aircraft Unit (GAU). The habitual species index is not named; perhaps it has not yet been accepted or is not subject to publication. In addition, the tactical and technical characteristics of the gun and auxiliary systems are not disclosed. At the same time, a couple of photographs were published showing the howitzer in the shop. The file names indicate that the pictures were taken in mid-May last year. 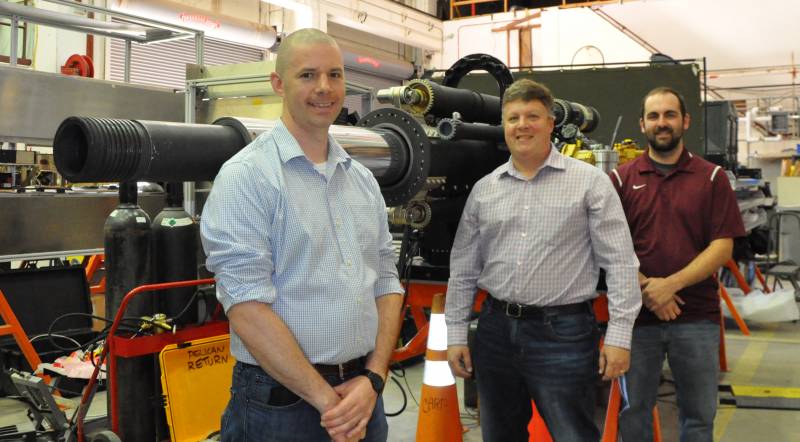 The new gun mount is based on a 105-mm rifled barrel of medium length. There is a thread in its muzzle, on which a tubular flash hider of the type used on the M102 can be installed. The barrel breech, bolt and other mechanisms were not shown. Apparently, they do not fundamentally differ from the equipment of an older howitzer. In this case, a semi-automatic system with manual feed of unitary shots must be used.

The barrel is movably fixed in a tubular cradle, which swings on its pins on vertical supports. Above and below on the cradle are hydropneumatic cylinders of recoil devices. The pistons are mounted in front of the unit, and the cylinders themselves are connected to the barrel breech. Probably, the larger upper cylinder acts as a recoil brake, and the lower one is responsible for returning the barrel to its original position.

Also on the installation there are additional tanks for various purposes and other details. At the same time, it seems that the gun mount was filmed not in a complete set and not in a working position. However, it is clear that this is a prototype that has been tested. This is evidenced by chipped paint and rust on different units.

It is easy to see that in terms of its architecture, the new 105mm GAU howitzer mount does not fundamentally differ from the previously used M102 product. First of all, this is due to the need for a quick and easy replacement of obsolete weapons - a new installation should not require significant processing of the carrier and its on-board systems.

The combat characteristics of the new howitzer could also remain at the same level. The parameters of the old M102 gun are quite consistent with the tasks at hand, and upgrading them can be overly complicated and impractical. In addition, maintaining the existing range of ammunition limits the potential for growth.

The main advantage of the shown howitzer lies in its novelty - it is made of parts and assemblies of modern production. Due to this, some technical and operational characteristics can be improved. At the same time, a significant reserve is created for the long-term use of new installations without any problems with the resource and spare parts.

The experience of operating the AC-130 gunships shows that howitzer installations, receiving the required maintenance, can remain in service for many years or even decades. Accordingly, the new product 105mm GAU will solve all the problems of the "main caliber" of the aircraft for many years to come. 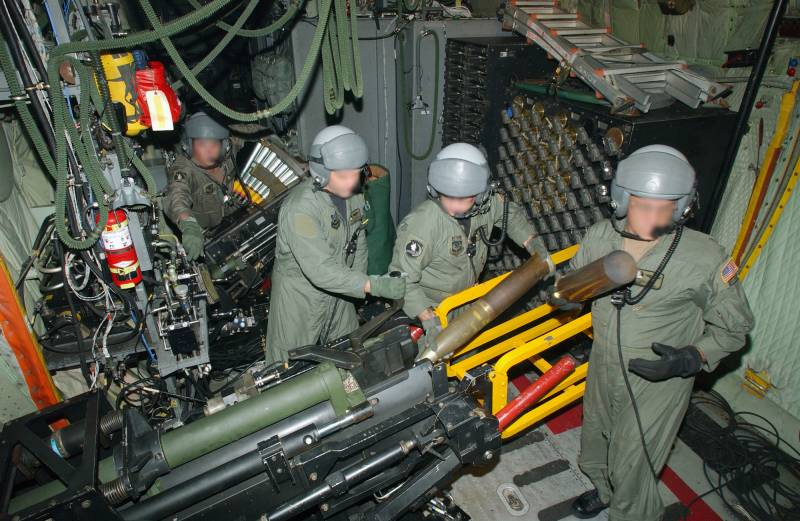 The benefits of such a project are obvious. At the moment, the Air Force considers it necessary to keep the 105-mm howitzer on the support aircraft, but the available weapons are morally and physically obsolete. The new development of NSWCDD will allow re-equipping the AC-130 with maintaining or some improvement in the desired combat qualities and extending the service life.

On the eve of modernization

of the latter, News it follows that the prospective howitzer has passed the first stage of testing, and the second will soon begin. After checking on a regular carrier, the Air Force can order serial production and mass re-equipment of aircraft. How long these processes will last, and how soon the AC-130 will receive new artillery, has not yet been specified.

It should be recalled that new projects for the modernization of fire support aircraft include not only the replacement of artillery. They use modern optoelectronic systems and fire control facilities. New guided missiles are being introduced, and the issue of installing a combat laser capable of taking on some of the tasks of guns and howitzers is being worked out.

All this shows that in the short and medium term, the US Air Force is not going to abandon the AC-130 fire support aircraft. Moreover, it is planned to continue their development with new features and functions. At the same time, despite the appearance of fundamentally new fire weapons, artillery will retain its place.