Hydrogen in aviation: now for hypersound 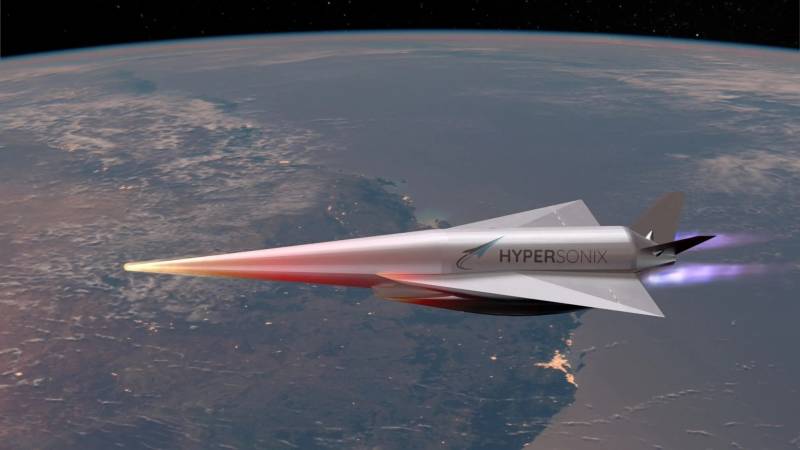 Hydrogen is an almost ideal fuel, and for most engines.

For example, it provides a very high specific thrust impulse, that is, an excellent ratio of engine thrust to mass fuel consumption, for jet engines. This is a direct consequence of the record energy intensity and small mass of hydrogen.

In terms of calorific value, this fuel is three times higher than aviation kerosene. In the combustion chamber, hydrogen also behaves well - it burns steadily and does not create harmful pulsations. A bonus for engineers is the high cooling capacity of the fuel, which increases the performance of engines.

And, of course, the main advantage of hydrogen in our age of total "greening" is its environmental friendliness - in the exhaust there is water vapor with a small admixture of nitrogen oxides.

However, hydrogen is friendly to nature only at the stage of combustion in the engine - the production of this substance is associated with considerable energy costs. But more on that later.

The idea of ​​using liquid hydrogen paired with liquid oxygen as a fuel was proposed by Tsiolkovsky at the beginning of the last century.

With all the advantages described above, the lightest substance in the universe has a lot of disadvantages.

First of all, the high costs of obtaining and liquefying gas - on average, one kilogram of hydrogen is 20–80 times more expensive than one kilogram of the best aviation kerosene.

Difficulties are added by the technology of storing such fuel, which you simply cannot pour into a tank. Even in the most modern tanks for hydrogen, accidental leakage is not ruled out. Therefore, at first, restrictions on the use of hydrogen fuel were purely technological in nature.

The idea of ​​using hydrogen as a fuel was seriously thought about only after the war - the Cold War and the space race just arrived. Research almost simultaneously started in the United States and the Soviet Union, but over time, the technological initiative passed to the Americans.

The skepticism of domestic engineers was associated primarily with the extreme danger of operating various types of hydrogen engines. The slightest depressurization of the fuel system led to the combination of hydrogen and oxygen into "explosive gas". So, when testing domestic rocket engines on hydrogen, it was necessary to carry control points at least 1 meters away.

Filled with 2-3 tons of liquid hydrogen, the propulsion systems were infernal machines in case of emergency situations.

Despite this, the United States managed to launch the Atlas-Centaur launch vehicle in November 1963, which was the first in the world to have an oxygen-hydrogen upper stage.

In the Soviet Union, the oxygen-hydrogen engine RD-0120, developed for the giant Energia launch vehicle, became most famous. 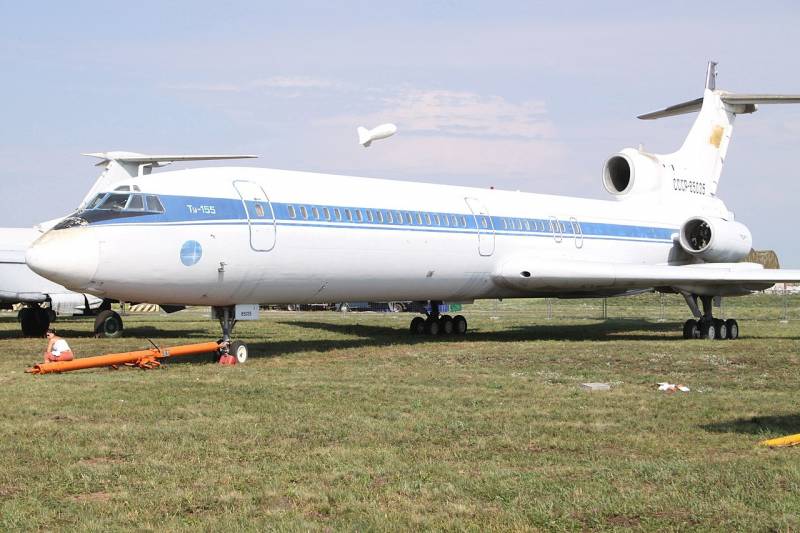 Tu-155. Source: edicthai.com
Closer to the topic of this article, another world achievement of Soviet engineers is the world's first cryogenic-fueled aircraft Tu-155.

It took to the air on April 15, 1988 with "hybrid" power plants. The fact is that one of the three engines, located on the right, was replaced by a hydrogen NK-88.

Evaluate the complexity of the design of the Tu-155 according to the memoirs of Valery Solozobov, who participated in the construction of a unique machine:

When designing the flying laboratory, it was necessary to significantly change the layout of the Tu-154 and solve a number of complex technical problems. In the rear part of the fuselage, where the passenger compartment was located, a sealed compartment was equipped, and a cryogenic tank for 20 cubic meters was installed in it. meters of liquid hydrogen with screen-vacuum thermal insulation, which for a long time keeps the temperature in the tank below minus 253 degrees Celsius.

The development of the Tu-155 was a by-product of the Energia-Buran program, which also created a hydrogen engine, albeit a rocket one.

In the late 80s, the USSR planned to create an entire industry for the generation of hydrogen, which is why its price should have fallen to a level acceptable in civilian transportation. It remains only to find those willing to board the plane with several tons of liquid hydrogen on board - even the most inexperienced passengers remembered the Hindenburg tragedy, which buried the airship industry for many years.

As a result, the Tu-155 made five flights in a hydrogen configuration, after which the NK-88 engine was redesigned for compressed natural gas. However, the calorific value of blue fuel is no longer three times higher, but only 15% higher than that of aviation kerosene.

But with storage, certain difficulties remain - the tanks must constantly hold minus 160 degrees.

However, compressed gas did not live up to expectations, and aircraft still use kerosene.

Now, certain hopes are associated with hypersonic machines, in which hydrogen can open up in a new way.

From Australia with hypersonic

Recent ones news about hydrogen engine building came from where they did not expect - from the Australian Hypersonix Launch Systems, which is only a little more than three years old.

Nevertheless, developers are proposing a revolution in the form of the concept of a hypersonic satellite delivery aircraft into orbit. Delta Velos is powered by four Spartan hypersonic ramjet engines.

Interestingly, for combustion, hydrogen does not require a supply of oxygen on board - the necessary oxidizer is extracted from the air stream at a speed of more than M = 1. The specially designed air duct of the Spartan engine compresses the incoming air to such an extent that the injected hydrogen in the combustion chamber immediately ignites.

At the same time, combustion is maintained at a supersonic flow regime - this is the key parameter of the engine.

For several years now, specialists from the domestic TsAGI have been doing something similar as part of their work on hydrogen ramjet engines.

According to Hypersonic, they have bigger plans, after all, the Spartan engine has been in development for about 30 years and even made more than a dozen suborbital flights. Obviously, other people were engaged in fine-tuning the motor - the company itself, we recall, is only three years old.

In order to put a hypersonic engine into operation, an upper stage is required. This role is performed by the oxygen-hydrogen Boomerang, which, after running out of fuel, separates, spreads its wings and glides to the base. All in the best traditions of Elon Musk.

History is being started only for the sake of a 50-kilogram satellite in the belly of the hypersonic Delta Velos, which, at an altitude of several tens of kilometers, will go into free flight, and the carrier will return home. The maximum speed at the peak of the trajectory is planned from 5 to 7 Machs. 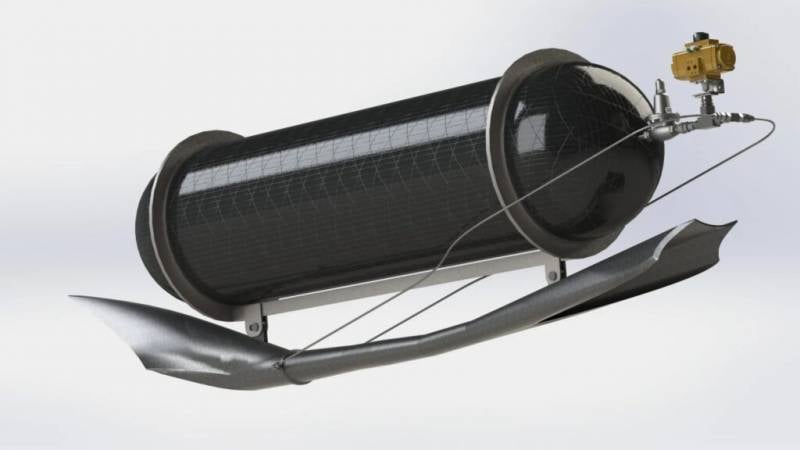 Spartan hydrogen engine. Source: naked-science.ru
So far, this is only a theory, but the Australians promise a practical implementation next year.

True, so far only in a miniature form factor - the prototype will be a reduced scale copy of the Delta Velos with a wingspan of 2,8 meters. A real hypersonic carrier of satellites will already have a span of 12 meters.

If all goes well, the first full-fledged technology demonstrator should fly in 2024. At the same time, the project may have several development options - this is a military embodiment, and a civilian hypersonic aircraft capable of crossing the Pacific Ocean in a couple of hours. 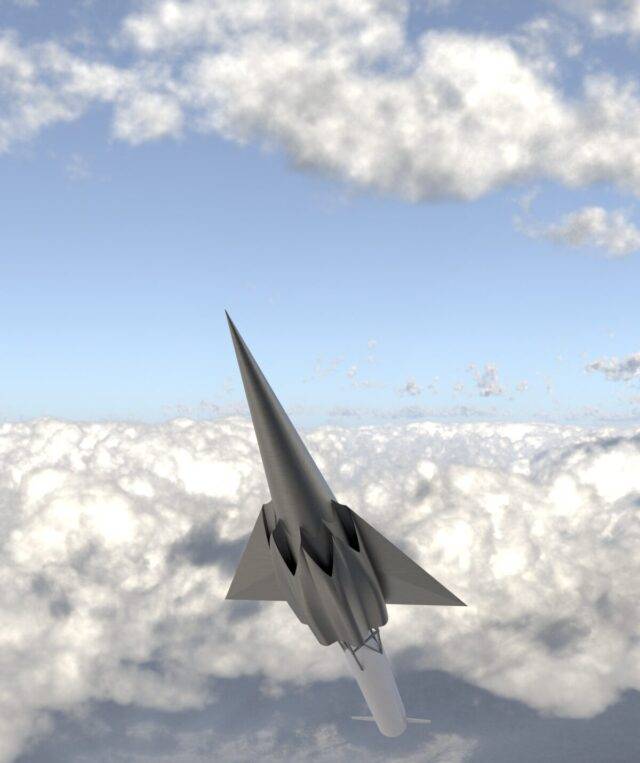 Delta Velos. Source: naked-science.ru
Such a bold use of hydrogen is explained, first of all, by the global "green" strategy - the leading countries are switching to the electrolysis synthesis of a substance.

Solar panels and wind generators were chosen as a source of environmentally friendly electricity. Hydrogen should become a kind of energy accumulator for periods of forced downtime of windmills in calm.

It is from such storage facilities that they plan to refuel their hypersonic and extremely “green” drones Hypersonix Launch Systems.

However, hydrogen will still be economically disadvantageous.

Firstly, the high cost of electricity from wind turbines and solar panels in the coming decades will not compete with the generation of thermal power plants, and even more so, state district power plants and nuclear power plants.

Secondly, to obtain hydrogen from water electrolysis, expensive distillers are required - plain water from the lake is not suitable for such high-tech. And this is also an additional cost.

And if the production of "green" hydrogen really becomes massive (at the cost of incredible costs), then where to dispose of hundreds of thousands of tons of brine left after the distillation of the original?

And will the projects of hypersonic hydrogen shuttles, which consume fuel like crazy, aggravate the situation?