21 September 2012
75
At the beginning of the 199s, Uralvagonzavod demonstrated its new development - Object XNUMX. When creating this vehicle, the goal was to provide fire support. tank connections in various battle conditions. For this reason, "Object 199" received an alternative designation BMPT (Tank Support Fighting Vehicle). The theme on which the project was created bore the code "Frame", which eventually became the name of the machine itself.

By design, the BMPT is a kind of “hybrid” of the main tank and infantry fighting vehicle: a tower with a relatively weak weaponry for heavy armored vehicles is mounted on the tank chassis. At the same time, a complex of 7,62-mm machine guns, automatic guns of caliber 30 millimeters, automatic grenade launchers and anti-tank guided missiles are in some respects not inferior to tank guns. The main purpose of the BMPT is to escort tanks, detect and destroy tank-dangerous targets, enemy light fortifications, as well as tanks. According to the calculations of the designers, one “Frame”, thanks to a variety of weapons, is able to replace six infantry fighting vehicles and 40 men of motorized rifle assault. Because of such high rates of calculated efficiency, the unofficial nickname “Terminator” stuck to the combat vehicle. 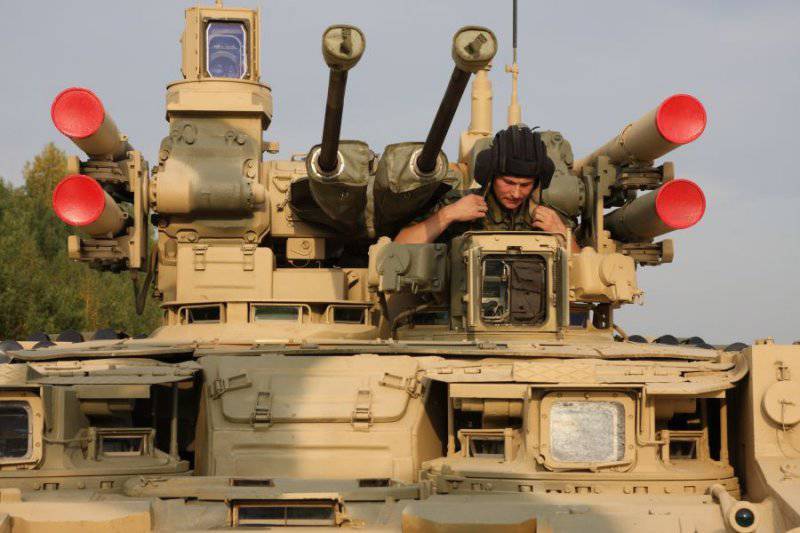 In the middle of the two thousandth, the first information appeared regarding the prospects of the project. Representatives of the Ministry of Defense talked about planned purchases of BMPT, as they say, in commercial quantities. In addition, the project was created on the basis of the chassis of existing tanks, which would allow the existing equipment to be converted into new combat vehicles. There were promises for the year 2010 to form the first company "Frame" in the Russian armed forces. However, new messages were received in 2010. As it turned out, the commanders could not enter the BMPT in the current budget, and also did not find a place for it in the concept of using armored troops and, as a result, were forced to abandon the procurement. Since then, a seemingly promising project has not received appropriate distribution. All orders were limited to ten units, which are now being delivered to Kazakhstan.

It is quite obvious that the rejection of the purchase of a new combat vehicle could not but cause a certain reaction on the part of experts in the field of weapons and fans of military equipment. In the statements of some of them, an undoubtedly interesting and promising machine turned into a kind of miracleweaponable to save the whole army alone and win any war. The leadership of the military department, respectively, in these theses acquired the appearance of villains and traitors who want to destroy the entire defense of the country. Such categorical statements always make one doubt their truth, which has led to numerous disputes. If desired, it is not difficult to find another online forum with similar proceedings and examine all the arguments of the parties, most of which relate exclusively to the technical and combat characteristics of BMPT.

More rarely, attention was paid to the tactical side of using the "Terminator" or even to the very necessity of such a machine. Arguments to appeal to foreign experience were often used in debates on the topic of necessity. In other words, if the BMPT was demonstrated ten years ago and during this time no foreign analogs appeared, does it make sense to develop this theme? It cannot be said that this argument is devoid of logic, although it is perhaps also difficult to agree with it. As it turned out, the opinion about the absence of analogues abroad was based on the absence of relevant information. A similar project in recent years has been developed by French designers.

This week in the blog of the famous expert in the field of armored vehicles A. Khlopotov a small note appeared about an interesting publication in the French magazine Raids. The latest issue of the publication is entirely devoted to the recent Eurosatory-2012 exhibition held in Paris. Among other publications in the journal there is an article about the Russian car BMPT. In general, the material is nothing interesting - a description stories, characteristics, etc. In general, everything that is usually written about a new technique in advertising brochures or review articles. The attention of the expert was attracted by the surname of the author of the publication of "Frame". He was widely known in certain circles, Mark Shasillan. This man at one time participated in the work on the French main battle tank AMX-56 Leclerc and rose to the post of director of the program. Monsieur Chasillan spoke well of the Russian project and spoke a little bit of the little-known Leclerc T40.

As it turned out, a few years after the first demonstration of the Terminator, the designers of GIAT started working on a similar machine. The idea of ​​supporting tanks with small-caliber artillery fire and machine guns appealed to French engineers and attracted the attention of the military. However, for more successful advancement, the project was initially positioned as a reconnaissance tank, and not as a vehicle supporting the main tanks. The project called Leclerc T40 meant dismantling the AMX-56 tank from the home turret and installing a new combat module in its place. The basis for armament T40 became automatic gun CTA caliber 40 millimeters. Auxiliary armament of the “reconnaissance tank” is a machine gun placed on a remote-controlled turret in the upper part of the tower, as well as two four-barreled smoke grenade launchers. The crew consists of three people: driver, gunner and commander. Unlike the Russian BMPT, the T40 does not have automatic grenade launchers in the fencing shelves and does not need additional arrows for them.

Several images of the designed TGNUMX Leclerc were attached to the Chassilan article. It follows from them that the French engineers were more likely to adhere to the general concept of the vehicle for escorting tanks, rather than trying to copy the Russian “Object 40”. Thus, the updated Leclerc with a new weapon system does not have the ability to simultaneously transport and use a large number of guided anti-tank missiles. Moreover, the available images do not show any devices for installing transport-launch containers of an ATGM like MILAN or ERIX. Perhaps with the further development of the project T199 would receive rocket armament in addition to the receiver.

The means of protection of tank support vehicles also vary considerably. Both of them were created on the basis of the main battle tanks and generally inherited the concept of providing protection for the crew and the main components of the structure. In the case of BMPT, there is a counter-booking with the possibility of installing dynamic protection. T40, in turn, is fully compatible with attachments of the project Leclerc AZUR. On the front of the armored hull mounted additional protection modules. The stern of the T40 combat vehicle is covered with anti-cumulation grilles. A set of equipment for the Leclerc tank called AZUR (Actions en Zone Urbaine - Actions in urban environments), as its name implies, was created to ensure the safety of armored vehicles in urban areas and on similar battlefields, where high speed is not required, but good level of protection from all angles.

Specifications "Leclerc" T40, unfortunately, were not called. Therefore, it is necessary to be content only with the available information on the relevant indicators of the base tank AMX-56. Perhaps the lighter tower "reconnaissance tank" slightly increased the maximum speed or throughput. However, all the advantages of a new combat module could be “eaten” by the weight of additional protection. Anyway, there are no exact data at least regarding the calculated characteristics of T40.

The fate of the 199 Object and Leclerc T40 projects is somewhat similar. The first exists in several prototypes and small series. The French combat vehicle is still available only in the form of drawings. The fact is that the design of the updated Leclerc was completed at the very moment when the French government began to cut defense spending. The Fifth Republic did not even have money to build a prototype. When promoting T40, even the offer to make these vehicles out of the withdrawn tanks did not help. The military department was adamant. It did not allow to assemble and test even a new combat module.

Why Monsieur Chasillan wrote about T40 right now is not entirely clear. Moreover, the logic of comparing this machine with the Russian BMPT is rather difficult to see. Yes, the equipment of both projects is designed to fire tanks from tank-hazardous targets. But the appearance of the machines varies considerably: the composition of the armament "Frames" allows you to attack and destroy enemy tanks. T40 does not have such powerful weapons and rather is designed to work with lightly armored or unprotected targets and enemy manpower. Protection of the French military vehicle rather transparently hints at the alleged conditions of use - a city or another similar locality where the threat can come from all sides. This is precisely the reason for the lack of anti-tank missiles and related equipment.

Tank support vehicles, despite the general aspects of the concept, are quite different among themselves and the reasons for putting them in one article are a separate issue. A. Khlopotov expressed the opinion that the French engineer did not fail to recall the project with “political” goals. Probably, Chasillan knows the existence of many disputes around BMPT and he tried using his original method to promote his Leclerc T40, telling the general public about it. In this case, under the pressure of the interest of the popular masses, T40 will be able to reach at least the prototype stage. Of course, this is only an assumption, but in advancing their projects, engineers sometimes go for big tricks. 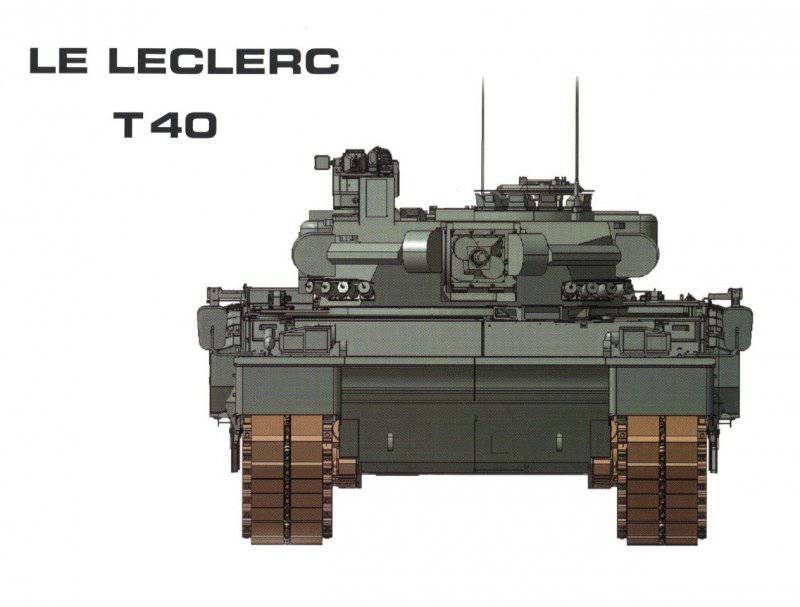 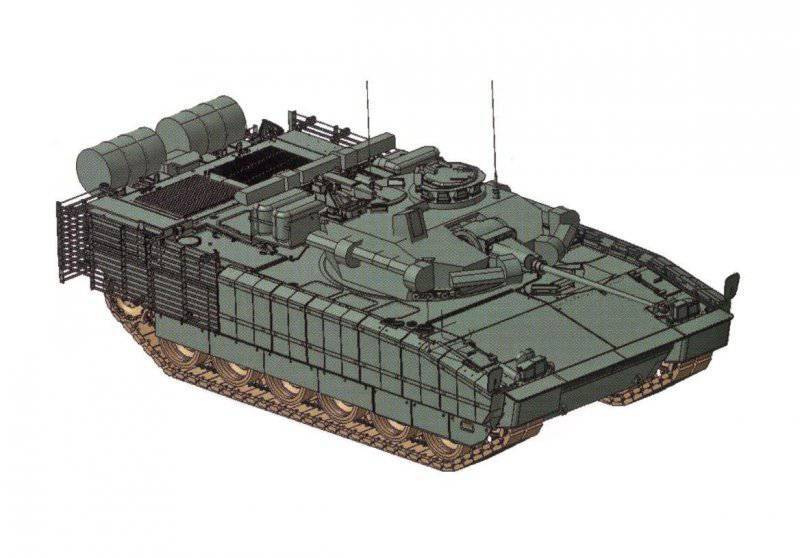 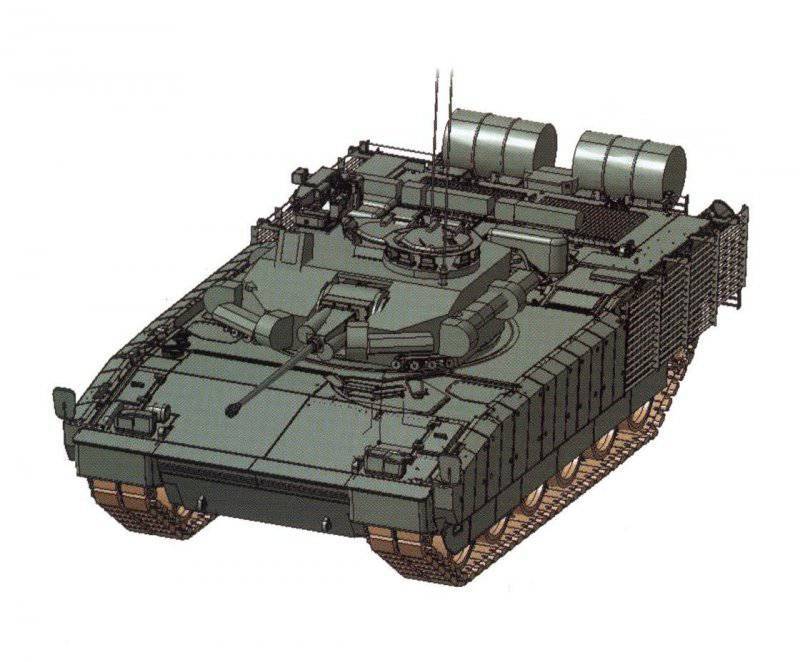 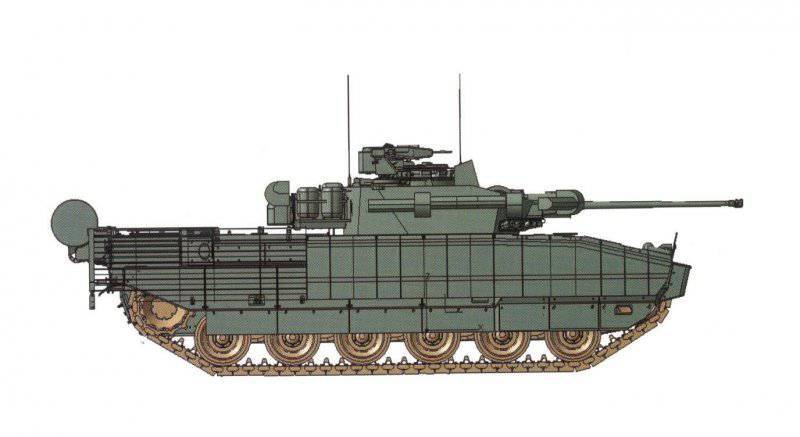