The first flight into the future: Tu-160M ​​of a new construction entered the tests 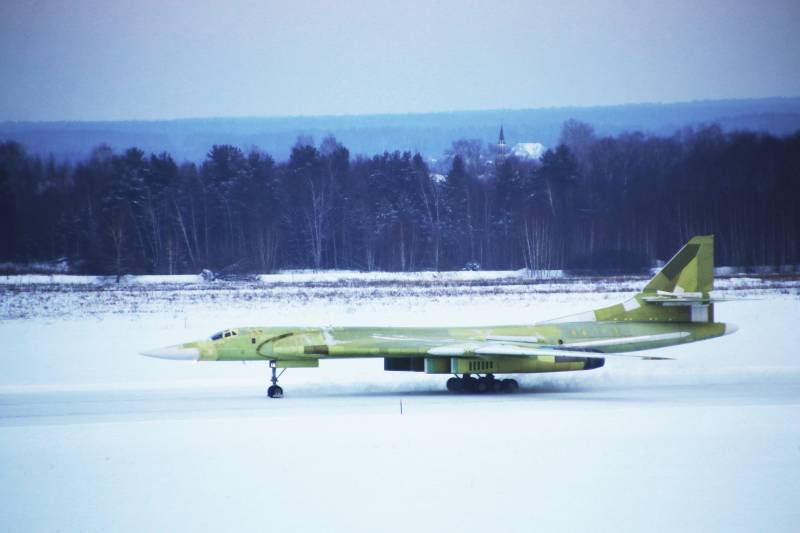 On January 12, a completely new strategic bomber-missile carrier Tu-160M ​​took off from the airfield of the Kazan Aviation Plant for the first time. This event is of great importance for the development of domestic combat aviation... It shows that the production of the most complex aviation complex has been fully restored and is ready to fulfill orders from the Ministry of Defense.

The road to trials

Work on the restoration of the serial production of Tu-160 aircraft has been carried out since the mid-tenths. The preliminary measures took several years, and at the end of 2018, the Ministry of Defense announced the start of construction of two new bombers at the Kazan Aviation Plant. Unlike the machines already under construction, it was planned to make them practically from scratch - using newly manufactured structures and assemblies.

The construction of the first of the new Tu-160Ms was completed last year. In November and December, information appeared in the press about the imminent start of ground and flight tests. It was reported that KAZ works in three shifts and prepares the plane for planned events. The possible dates of the first flight were also given - it could take place at the end of 2021 or at the beginning of 2022.

In recent weeks, the new Tu-160M ​​has passed all the necessary ground checks and made its first flight on January 12. The bomber was in the air for about half an hour; the flight was carried out at an altitude of 600 m. The Tupolev test pilot crew performed the flight according to a simple program and determined the stability and controllability of the aircraft. 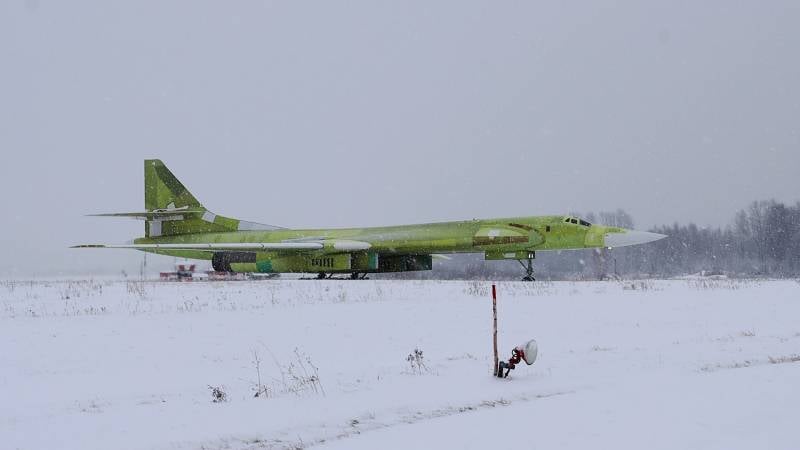 Now the project participants will have to carry out the entire range of flight tests. During these events, it is planned to confirm the calculated characteristics, as well as to determine the compliance of new solutions and technologies with the requirements for the modernized project. In addition, within the framework of the tests, certain shortcomings can be identified and corrected.

It is not known how long the tests of the first new Tu-160M ​​will last. The high degree of novelty and the corresponding responsibility require a particularly careful approach. However, there is no doubt that over the next few years, the new bomber will be handed over to the customer and will go into operation, complementing the aircraft of the previous series.

The new Tu-160M ​​was built from scratch and without using the existing stock or old-made units. In addition, the aircraft is made according to the modernized design and differs significantly from the technology of the old release. All this became possible thanks to the successful implementation of a complex multicomponent program for the resumption of production and restoration of competencies.

This program provided for a wide range of various measures, in fact, affecting all stages of the project. Thus, a fundamentally new digital environment was created for working on a project. It included a number of design organizations involved in the program in different roles, and all documentation was created in digital form. 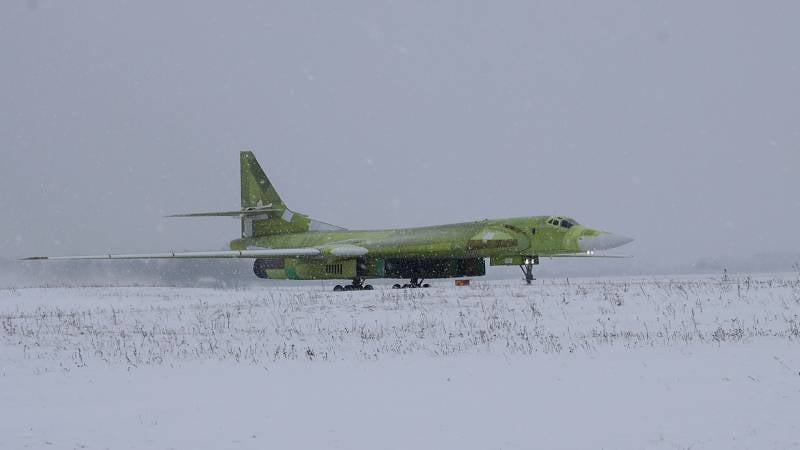 Using this approach, a new version of the Tu-160 project was developed. It is distinguished by the use of a large number of modern systems and components that ensure the growth of various characteristics and parameters. General Director of the United Aircraft Corporation Yuri Slyusar noted that in the latest version of the Tu-160M ​​systems and equipment were updated by 80%. In fact, only the outer appearance of the bomber has been preserved, while inside it is almost completely updated.

In order to prepare for the future production of units and the assembly of aircraft, several enterprises involved in the project were modernized. In particular, the Kazan aircraft plant, which plays a leading role in the project, updated approx. 40% of workshop equipment. A unique installation for electron-beam welding and vacuum annealing of titanium, used for the manufacture of key airframe units, was restored and put into operation. Part of the plant's employees involved in the construction of the Tu-160M ​​underwent retraining with advanced training. The flight test base has been updated, where all new aircraft will be tested, and not only the Tu-160M.

The key task of the program was to restore the production of NK-32 turbojet engines. The United Engine Corporation and the UEC-Kuznetsov company successfully coped with this and set up serial production of the upgraded NK-32-02 products. They are already being used in the construction and modernization of the Tu-160.

The efforts of other project participants have developed and modernized a lot of electronic systems and devices intended for use on the Tu-160M. With their help, compliance with modern requirements is ensured, as well as a number of operational and combat characteristics are increased. 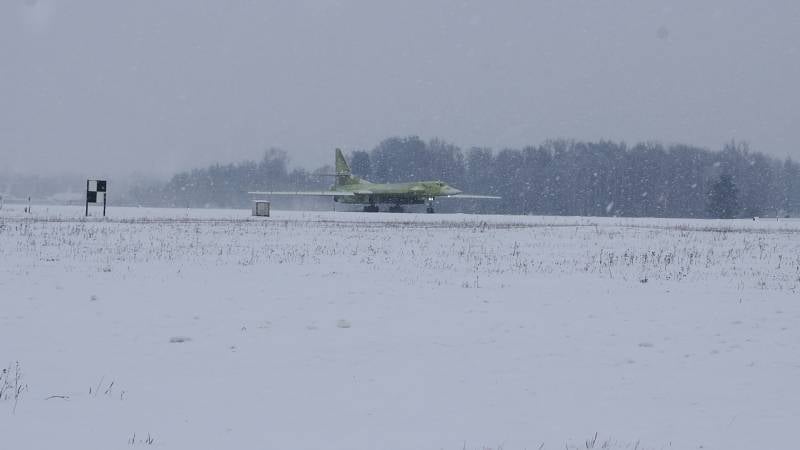 Considering the overall scale of the program, the initial conditions, the volume of work carried out and the changes made to the project, one can speak not just about the restoration of the existing production. In fact, it was built and re-launched - and now it gives the desired results. So far, we are talking only about one new aircraft, but more are expected in the near future.

The construction of new Tu-160M ​​aircraft is carried out in accordance with an order from the Ministry of Defense issued in January 2018. This document provides for the construction of 10 missile-carrying bombers of a new series by 2027. It was reported that the first flight of the lead aircraft will take place in 2021, and supplies of equipment to the troops will begin in 2023.

The recent start of flight tests of the new Tu-160M ​​shows that the work is generally proceeding in accordance with the established schedule. The first flight of the car took place a little later than the previously named date, but such a lag cannot be called significant or capable of negatively affecting the entire program.

Even at the stage of launching the production recovery program, it was argued that the Ministry of Defense could order 50 new aircraft over the next few decades. In addition, it was planned to carry out overhaul and modernization of existing machines of the previous series. Both tasks are being successfully solved at the present time. 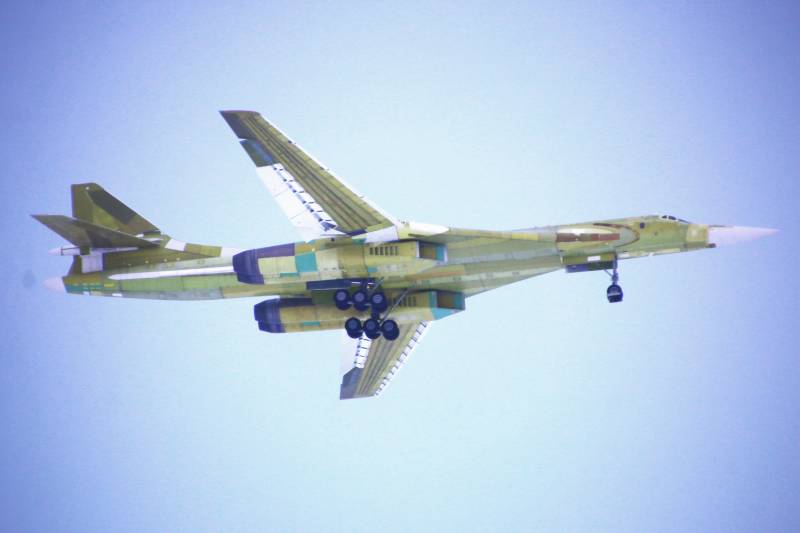 Currently, the Russian Air Force has less than 20 Tu-160 bombers in several basic modifications. At the same time, the modernization of equipment continues, which gives known positive results. The appearance of a dozen new missile carriers by 2027 will significantly improve not only the qualitative, but also the quantitative indicators of the bomber. fleet.

In the future, most likely, the production of new Tu-160M ​​will continue. The fulfillment of new contracts will again increase the number of bombers. In addition, in the distant future, the technology of future series will make it possible to decommission old aircraft, which by that time will have reached their end of life.

As a result, we can expect that in a few decades - in the middle of the century or later - a noticeable share of our strategic aviation will continue to be Tu-160M ​​in the current modification at that time and with a sufficient remainder of the resource. Even after the appearance of the promising missile carrier PAK DA, the new Tu-160M ​​will not lose their significance.

First flight to the future

Thus, the Russian aviation industry and related industries have successfully completed the necessary work and restored the entire production cycle of Tu-160 strategic missile carriers, and immediately in a modernized version. Proof of this success is now the lead aircraft of the new series, which recently made its maiden flight.

Now "UAC", "Tupolev" and allied companies will have to carry out tests, perform the necessary modifications, hand over the aircraft to the customer - and continue the construction of the series. The production resumption program has passed the first difficult stage and begins a new stage. It will not be simple either, but now its results will be real aircraft entering the Air Force.