"Generalissimo Suvorov" and others. Boreas in 2022 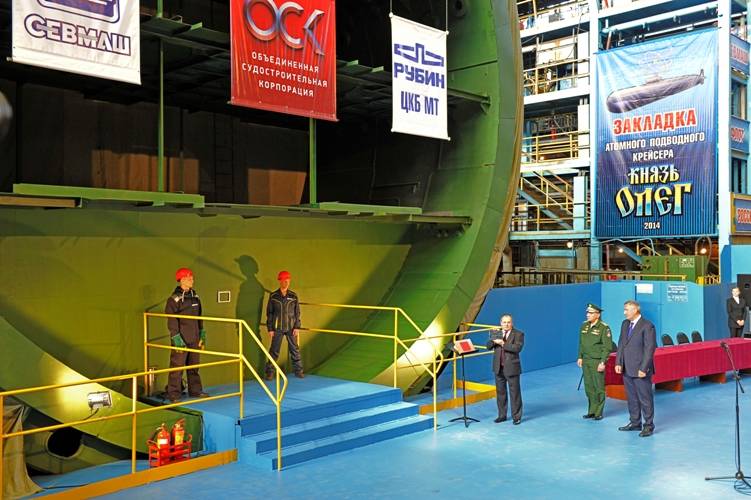 In the context of the modernization of the naval fleet of particular importance is the program for the construction of strategic missile submarines pr. 955A Borey-A. Not so long ago, the latest successes of this program were reported, and work continues. In the new year 2022, a number of important events are expected to positively affect the state of the submarine forces.

On December 21, a solemn ceremony of accepting new submarines into the Navy took place in Severodvinsk. The flag of the Navy was hoisted on the Knyaz Oleg strategic missile cruiser and on the Novosibirsk multi-purpose nuclear submarine. The Commander-in-Chief of the Navy and the Deputy Minister of Defense were present at the ceremony. The President and the Minister of Defense watched the event via video link.

Two submarines were built at the Sevmash enterprise in Severodvinsk and tested in the nearest waters. The flag-raising ceremony was also held at the plant. At the same time, the ships are intended for the Pacific Fleet. In the near future, when weather conditions allow, the submarines will make the transition to a permanent duty station. 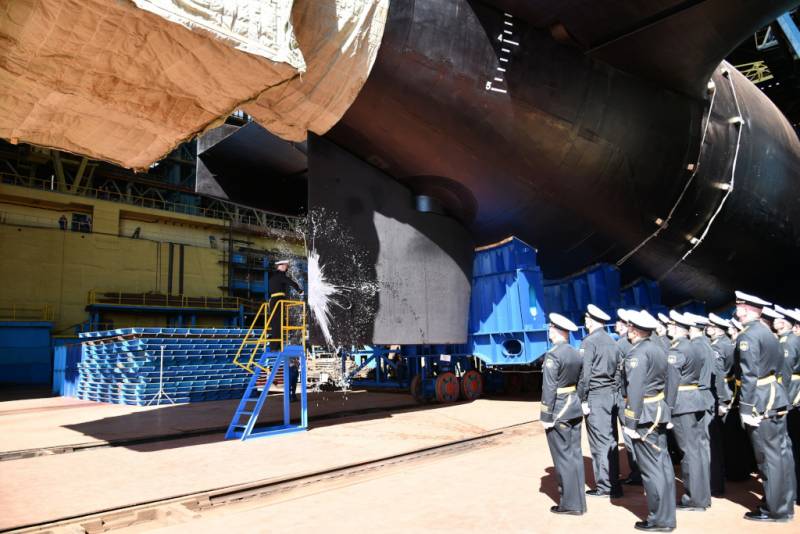 "Prince Oleg" is ready for launching, July 2020
The dates of the submarines' arrival at the bases of the Pacific Fleet have not yet been specified. Most likely, this will happen within the next few months. Accordingly, during the year the crew of the "Prince Oleg" and coastal units will carry out all the necessary measures, and the cruiser will be ready for full-fledged service and for combat patrols.

Thus, by the end of 2022, the Navy will already have five combat-ready and ready-to-work Boreevs. Three of them will serve in the Pacific Ocean. At the same time, the submarine forces of the Pacific Fleet will be replenished with a new ship built according to the modernized Project 955A, which has significant advantages over the basic design.

On December 21, during an expanded meeting of the Collegium of the Ministry of Defense, the leadership of the department revealed some of the current plans for the further construction of Borey-class nuclear submarines. In particular, they indicated that the priority task for the next 2022 is the completion of work and the acceptance of the new submarine Generalissimo Suvorov into the fleet. This cruiser is the sixth in the entire series and the second serial representative of Project 955A. 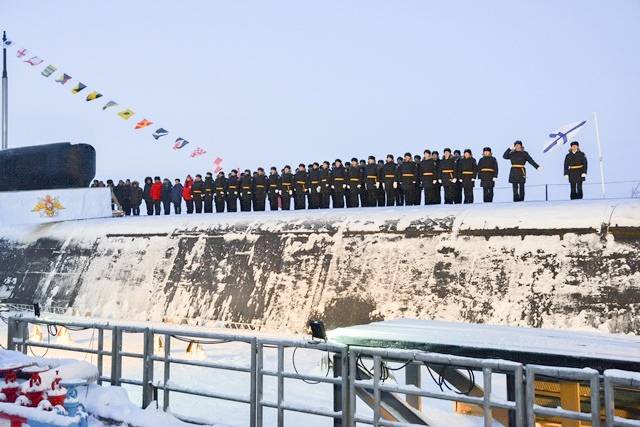 Flag-raising ceremony on new nuclear submarines, December 21, 2021
At that time, "Generalissimo Suvorov" was in the workshop of "Sevmash". Employees of the enterprise carried out the remaining work before the withdrawal of the submarine from the slipway and launching. In addition, a ceremony was being prepared during which the ship was supposed to leave the workshop.

The solemn event took place just a few days later - on December 25th. At the ceremony, congratulations were received from the command of the fleet and the leadership of the Arkhangelsk region. In addition, according to naval tradition, the submarine commander broke a bottle of champagne on the side, and the process of withdrawing the ship from the boathouse began.

The coming months "Generalissimo Suvorov" will spend at the pier of the manufacturer. The remaining work and the first checks of the equipment will be carried out. Then mooring tests will begin, according to the results of which the ship will be allowed to sail. It is expected that all these events will take place during 2022. No later than December, the new cruiser can be accepted into the fleet. According to known data, it will be transferred to the Pacific Fleet. 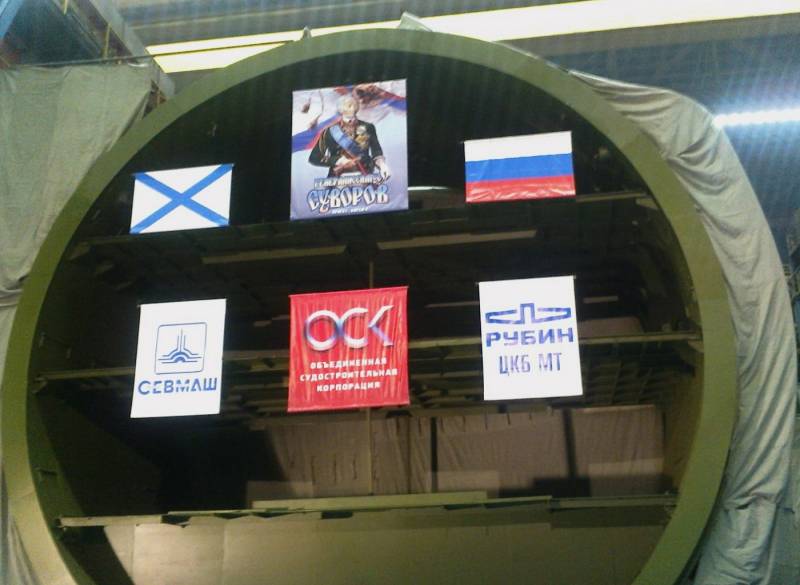 The first section of "Generalissimo Suvorov", December 2014
Plans for carrying out all the remaining work and testing during this year look quite realistic, and this is confirmed by practice. So, the lead Borey-A, Knyaz Vladimir, was launched in November 2017, went on trial about a year later, and went into operation in June 2020. The first serial ship of the project, Knyaz Oleg, was launched in July 2020, brought to trials in May 2021, and the acceptance certificate was signed in December.

This shows that the project has been fully worked out, and the manufacturer is ready for a quick and smooth execution of orders. Any significant problems that could negatively affect the delivery time of the new SSBN should not be expected. Accordingly, the Generalissimo Suvorov has every chance of joining the fleet at the end of the year. Shortly after that, the cruiser will go to the place of service, and as early as 2023, the first trip may take place.

Until the end of the year

At an expanded meeting of the Collegium of the Ministry of Defense, the head of state noted that after the "Prince Oleg" industry should transfer five more submarines of Project 955A to the Navy. It is obvious that the first of them this year will be the "Generalissimo Suvorov". The next four ships are still at different stages of construction, and their acceptance will take place only in a few years. However, some events are already planned for this year. 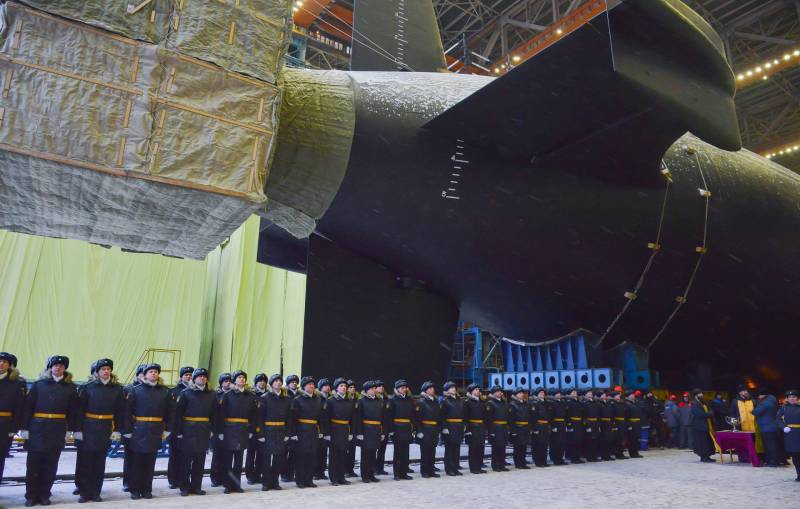 The withdrawal from the boathouse of the submarine "Generalissimo Suvorov", December 25, 2021
The new "Generalissimo Suvorov" will be followed by the cruiser "Emperor Alexander III" - the fourth representative of the modernized Borey-A project and the seventh ship of the entire series. It was laid down in December 2015 and is still on the slipway. However, the construction is already moving to the final stage. A month ago, domestic media reported that this ship would be launched at the end of 2022. The transfer to the fleet will take place about a year after that.

The next in the series will be the Knyaz Pozharsky, laid down at the end of 2016. The work schedule for this order has not yet been specified. The construction process of the previous submarines of the series suggests that in 2022 this SSBN will remain under construction, and launching and testing should be expected no earlier than next year.

A similar forecast can be made for the cruisers "Dmitry Donskoy" and "Prince Potemkin". They were laid down just a few months ago, in August 2021, and construction is still in its very early stages. According to current plans, these submarines will be launched and handed over to the fleet only in the second half of the decade. 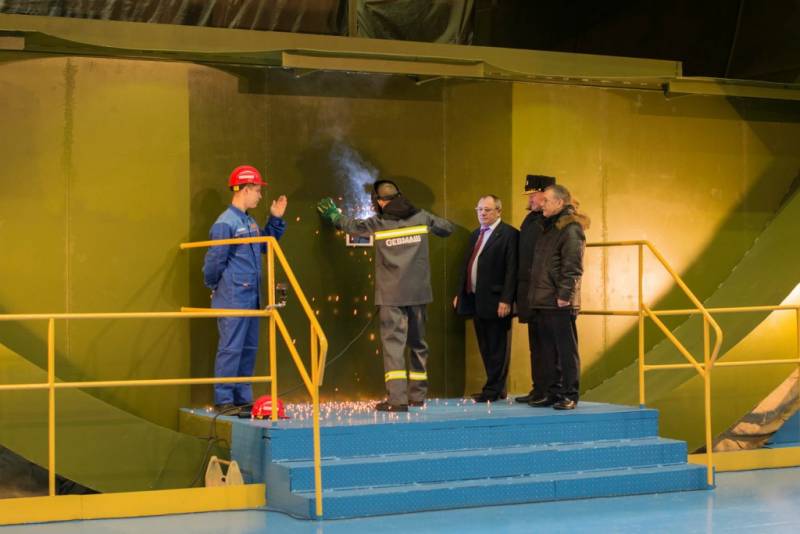 The construction of strategic nuclear submarines pr. 955 (A) continues and has reached a fairly high pace. In recent years, several important developments have taken place within the framework of this program, and more are expected in 2022. At the same time, the year that has just begun is of particular importance. This year, industry and the navy will have to test one cruiser, complete and launch a second one, and continue building two more.

For obvious reasons, the main focus this year will be on the Generalissimo Suvorov cruiser. It is already at the berth of the Sevmash plant and is preparing for testing. In the absence of serious difficulties, which are now unlikely, the fleet will be able to receive it before the end of the year. It should be noted that news about new stages in the biography of "Generalissimo Suvorov" will be received in the next 2023. After acceptance, the ship and its crew will have to make the transition to the place of service, get used to it, and also begin to perform the assigned tasks.

However, the Boreev construction program is not limited to the submarine that was taken out of the shed a few weeks ago. This year, work on other orders will continue, and important events and events are also expected. And thanks to this, the new year 2022 will be able to take a prominent place in the modern stories Russian submarine fleet as an important and successful period.