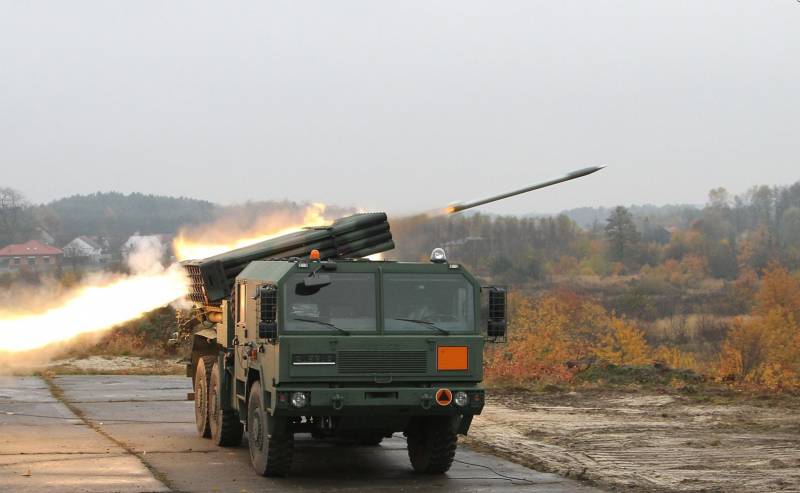 MLRS WR-40 Langusta, photo: www.hsw.pl
The Grad multiple launch rocket system is one of the hallmarks of the Soviet armed forces. Produced since the 1960s, the system entered service in many countries around the world, and the total production volume exceeded 8,5 thousand units.


Almost 60 years later, the Grad MLRS is still in service with many armies of the world, including thanks to the modernization of installations to modern standards.

In Russia, the 9K51M "Tornado-G" MLRS, which are a further development of the "Grad" system, are gradually entering service. Among other things, the firing range of the 122-mm MLRS was increased to 40 km. Many post-Soviet states, as well as countries of the former Warsaw Pact, have followed the same path of modernization of installations.

Development of the WR-40 Langusta

By 2007, Poland still had 227 BM-21 Grad installations on the chassis of the Ural-375 all-wheel drive truck in its armed forces.

The idea that these MLRSs need to be modernized and improved to meet modern challenges emerged in Poland in the early 1990s. True, the process of modernization itself was noticeably delayed.

First of all, it was proposed to replace the chassis of the installation with a domestic development, abandoning the Ural-375D base. By that time, the Soviet chassis was already sufficiently worn out, and the engine installed on the car was recognized as uneconomical. In addition, the supply of spare parts and components to Poland from the post-Soviet countries has become noticeably more complicated.

In addition to replacing the chassis, the Polish military planned to update the guidance system and adjust the fire of the MLRS. In parallel with this, the country was in the process of creating new jet ammunition with an increased firing range, which would also extend the service life of the installation and increase its combat potential.

One of the main requirements for the modernization was the preservation of the possibility of transportation by the most massive NATO military transport aircraft, the C-130 Hercules. 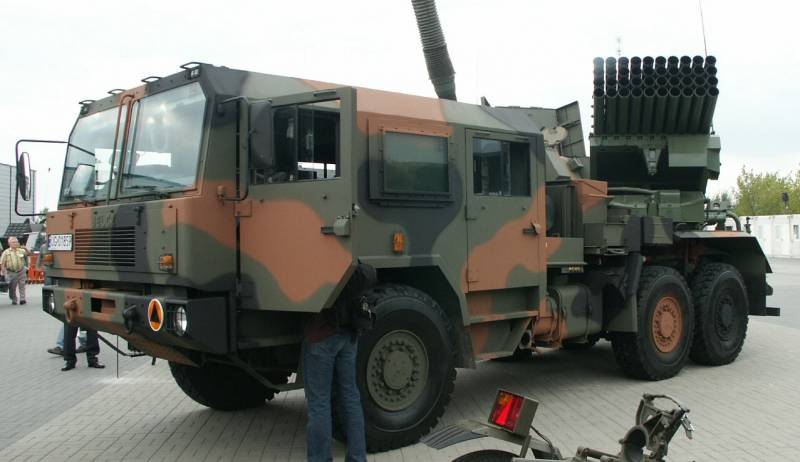 MLRS WR-40 Langusta of the 5th artillery regiment of the Polish army, photo: wikimedia.org
The first version of the modernization was presented only in 2003 and was based on the chassis of the Polish truck Star 1466 with an extended cab and a 6x6 wheel arrangement. This installation even managed to pass military qualification tests, but did not go into production and was not adopted for service. And soon the production of this truck was stopped in Poland.

The second modernization option was presented already in 2005. This time it was proposed to use the Polish Jelcz P662D.35 chassis with the same 6x6 wheel arrangement, but with an armored cabin that protects the calculation of the installation from small arms fire weapons enemy and light fragments.

The prototype was fully completed at the end of 2006.

Then, in December, the updated MLRS successfully passed military trials and was put into service under the designation WR-40 Langusta. The number "40" in the title is the approximate range of the new Polish Feniks-Z ammunition.

In addition to the chassis with an armored cabin and new missiles with an increased firing range, the updated Polish Grads received a modern fire control system with a ballistic computer, created by specialists from the Polish company WB Electronics. At the same time, the launch unit itself, in principle, has not undergone any special changes.

On April 22, 2008, the Polish army ordered the modernization of the first Grad MLRS.

The first batch consisted of 31 units. The production of MLRS was deployed at the facilities of the large Polish defense company Huta Stalowa Wola (HSW).

The base for the "Langusta" was the Polish chassis Jelcz 662D

The Jelcz 662D off-road truck with a 6x6 wheel arrangement was chosen as the chassis for the modernized Grad.

The family of off-road trucks developed by the Polish company of the same name Jelcz is widely used in the Polish Armed Forces. In addition to the base for the WR-40 Langusta MLRS, this truck is used as a base for an anti-ship missile launcher, artillery reconnaissance radar, and specialized military equipment.

For the variant with MLRS, a modification of the Jelcz P662D.350 car is used. This truck is equipped with a six-seater four-door cab, also developed by Jelcz engineers. The WR-40 Langusta's cockpit has STANAG 1 level 4569 ballistic protection (including armored glass), protecting the crew from conventional small arms ammunition. 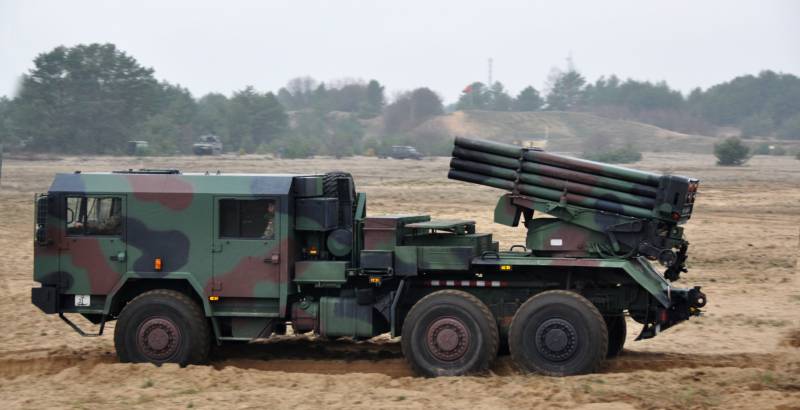 MLRS WR-40 Langusta, photo: www.hsw.pl
The carrying capacity of the specified chassis is 10 kg, the total weight of the installation is 000 kg (without rockets). Chassis length - 17 meters, width - 100 meters, minimum height - 8,6 meters, ground clearance - 2,54 mm. A car without special training is able to overcome water obstacles up to 2,74 meters deep.

The combat capabilities of the MLRS WR-40 Langusta

The combat capabilities of the Polish WR-40 Langusta MLRS are comparable to the Grad, the installation retained the same package of guides and is able to fire 40 122-mm rockets at the enemy.

The main ammunition is high-explosive fragmentation.

The increase in the combat capabilities of the installation was carried out by modernizing the chassis with increased ballistic protection, the emergence of modern fire control and guidance systems, and satellite navigation systems.

A noticeable role in improving the combat capabilities of the Polish Grad was played by new Polish ammunition, which made it possible to increase the maximum firing range of the MLRS from 20,4 to 42 kilometers.

Development of the 122-mm Feniks-Z rocket began in Poland at the same time the first ideas for modernizing the BM-21 appeared.

The process of modernizing these ammunition continues to this day.

If the first versions, tested in the 2000s, provided a flight range of up to 32 kilometers, then the latest versions of the improved M-21 FHE Feniks missile with modified weight and dimensions showed a maximum firing range of 2017 kilometers in 42.

The Polish military ordered at least 2019 of these ammunition in 3. 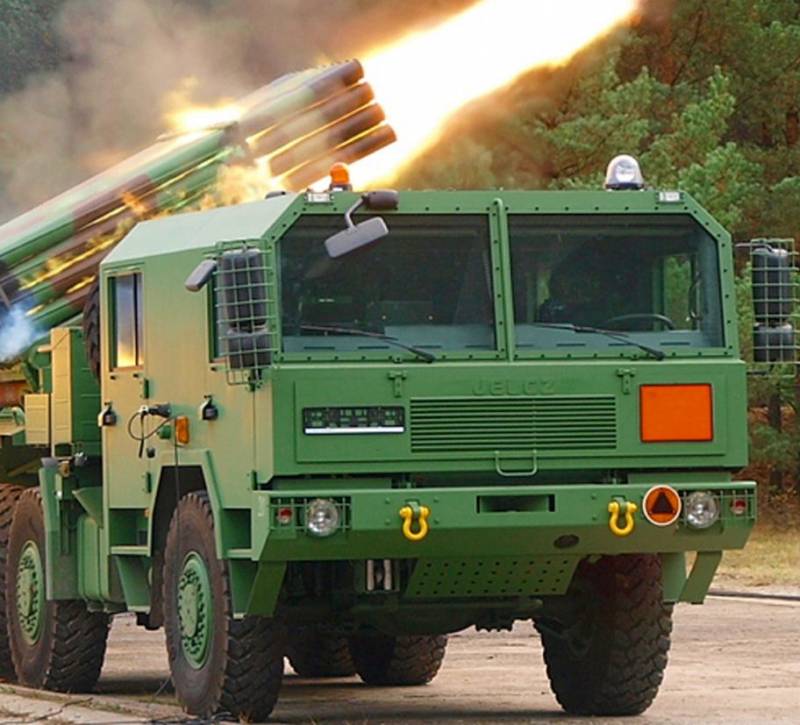 MLRS WR-40 Langusta is firing, photo: www.hsw.pl
MLRS WR-40 Langusta is able to release all 40 rockets at the enemy in 20 seconds. The maximum elevation angle of the rail package is 55 degrees, in the area bounded by the truck cab it is 11 degrees, the minimum elevation angle is 0 degrees. Horizontal firing angles are different. To the right of the vehicle chassis axis - 70 degrees, to the left - 102 degrees.

Despite the fact that the first MLRS were ordered by the Polish army back in 2008, the process of re-equipping the ground forces with the modernized Grad systems is rather slow.

According to data for 2018, the number of WR-40 Langusta MLRS delivered to the troops was estimated at 75 units. All of them are concentrated in the composition of three artillery regiments of the Polish army, three more vehicles are operated at the Artillery Armament Training Center in Torun.