A shooter with a Hungarian Gepard GM6 Lynx rifle in a prone position. Photo: gm6lynx.com

“Someday,” he said, wiping his fingers on his thighs, “all fools will die, and living people will want to go forward; they will understand what the strength of the strong is - they will unite all their forces, and they will not have to fight with each other, there will be no soldiers, no watchmen, no walls. Wild beasts will be killed, and, as Hairy Muzzle predicted, goats will graze in all the meadows, and all fields will be sown with wheat, all people will become brothers, and no one will be fattening in the sun in idleness. This will be when all the fools die and when there are no more singers singing songs from the life of bees.
"The strength of the strong." Jack London
Weapon and firms. Not so long ago, the British newspaper "Daily Mail" reported that British special forces acquired 150 Gepard GM6 Lynx rifles, capable of shooting down planes, helicopters and armored vehicles with one shot. It is also reported that they will equip such units as SAS, SBS, and the Special Reconnaissance Regiment in Iraq and Syria is already using this rifle. 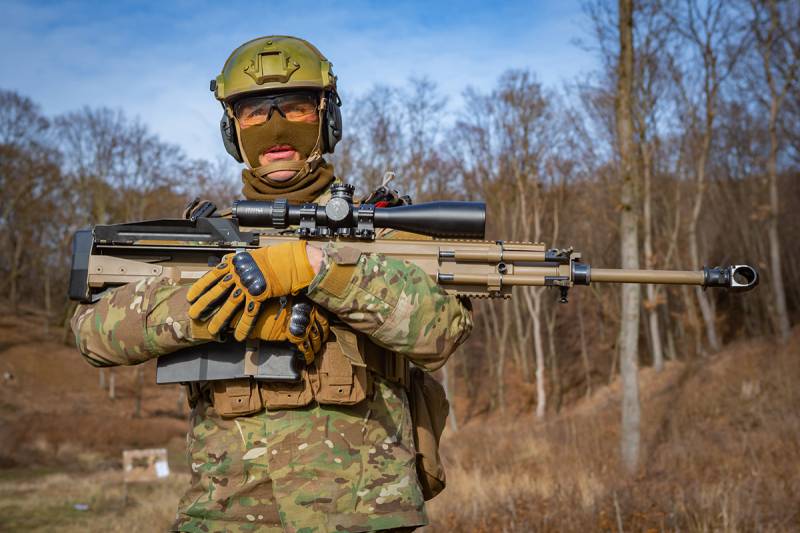 Shooter with a rifle during its tests. Photo: gm6lynx.com
Speaking of the Cheetah, one SWAT soldier likened this rifle to a howitzer for its strong “punch”, despite the fact that it weighs only 23 pounds (10,4 kg) and is 4 feet (1,2 m) long. ). In an interview with a British newspaper, he stated:

"A team equipped with such rifles can destroy half a dozen very expensive fighters or helicopters very quickly." 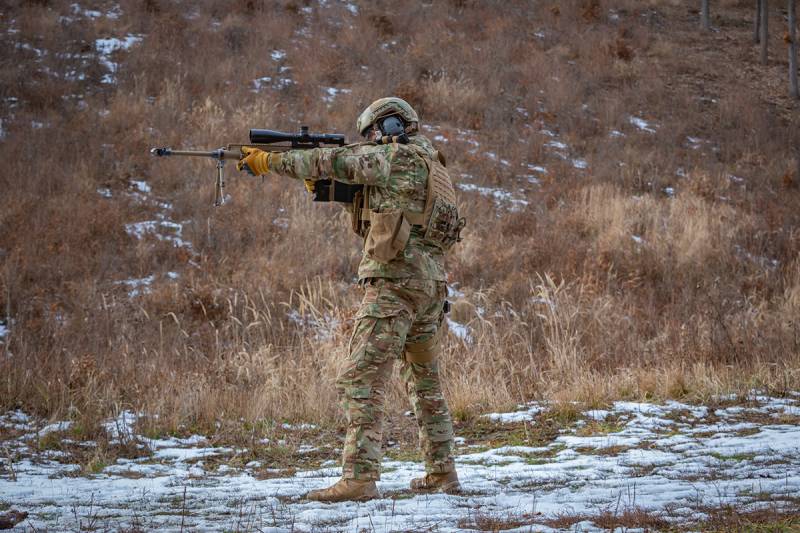 Standing with hands, you can also shoot from it, but it is unlikely that everyone can do it. But why shouldn't the special forces shoot ?! Photo: gm6lynx.com
It is noted that the bullet of this rifle caliber .50 (12.7 mm) has an initial velocity of 780 m / s (2559 ft / s) and easily penetrates the vehicle's armor, and then also explodes inside. 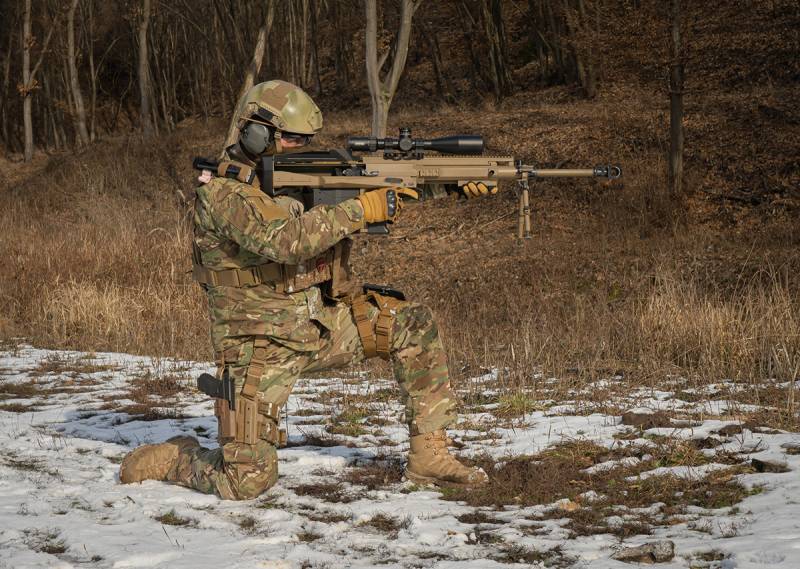 This is how it looks with the body in protective paint. Under the rifle is a box for storing and transporting it. Photo: gm6lynx.com
However, the most important thing in all this information message is that ... with all its developed military industry, if possible to buy "anti-material rifles" (as this class of small arms is called in England and the United States), the British military preferred to buy Gepard rifles in Hungary! That is, this is a Hungarian weapon designed and manufactured by the Hungarian company Sero International Ltd! And this is a great success for the Hungarian gunsmiths from this company!

Rifle in "black" design. Photo: gm6lynx.com
By the way, in addition to the helicopter, which it can hit at a distance of 1968-2625 meters, it is also designed to engage targets such as “light shelters and buildings, electronic structures and rocket launchers».

But how did the Hungarian designers manage to create such an effective weapon, and what are its "highlights"?

Well - it did not appear by chance, but was the result of almost three decades of development. The Hungarian military first requested a .50 caliber rifle around 1987, after which they were presented with a single-shot M1 rifle chambered for the Russian 12,7x108 mm cartridge. It was a precision weapon of great power, but it reloaded slowly, and shortly thereafter, the semi-automatic M2 was developed, followed by the semi-automatic M3 chambered for 14,5x114 mm (!). By the end of the 1990s, the company began producing an improved version of the M4 semi-automatic, and the M5 variant. And now, finally, the M6 ​​prototype appeared, representing an improved version of the M4 rifle.

This is how it looks when folded. In this form, it is very short! Photo: gm6lynx.com
The M6 ​​"Hiúz" (Lynx) (full name: Gepard Model 6 Lynx - "Cheetah model 6 Lynx") is a rifle with a long barrel travel and a rotating bolt, powered by a five-round magazine. It can use either 12,7mm Browning rounds (standard NATO cartridge), or 12,7mm "Russian" rounds with bolt and barrel replacements. It is designed in a bullpup configuration and can only be used with the right hand. It is currently used by the Hungarian Armed Forces, some military and security organizations, and for commercial / civilian purposes.

Rifle Gepard Model 6 Lynx. Right view. The shutter cover is open. The roller on the bolt is clearly visible, which rolls when the bolt moves back along the curly guide of the receiver. Reaching the end, the roller turns the bolt, and it disengages from the barrel. He immediately goes forward, while an empty cartridge case is removed from it and thrown out. After that, the deputy bolt goes forward, removes the cartridge from the store and sends it to the chamber. The rifle is ready for another shot! Photo: gm6lynx.com

Rifle, magazine and cartridges for it. Photo: gm6lynx.com
Field trials of the M6 ​​rifle began in 2007 and in the same year it was first introduced to the public. And in general, this is a completely unique weapon for its class. First of all, we note that this rifle is compact and lightweight for such a large-caliber sniper rifle. It uses the principle of automatic action with a barrel recoil with a long stroke (today it is very rare!), And the use of an effective muzzle brake significantly reduced the recoil that the shooter feels when firing from it. In addition, thanks to the effective method of damping the recoil, this rifle allows (with more or less convenience - understandably, but allows) aimed fire from hands without resorting to a bipod or some other support, although it naturally has a bipod. The barrel is locked by turning the bolt. At the end of the barrel there is a powerful single-chamber muzzle brake.

A rifle with a muzzle brake-silencer on the barrel. Photo: gm6lynx.com
The use of the principle of barrel recoil with its long stroke made it possible to use an advantageous opportunity in this rifle - to transport it by pushing the barrel into the butt until it stops. The barrel is moved to the "ready to fire" position using a button on the front of the barrel casing. In addition, if there is a loaded magazine and when the barrel is transferred from the traveling position to the combat position, the cartridge is automatically sent to the chamber, and it turns out that the rifle will be immediately ready to fire, as soon as its barrel moves forward from the butt! 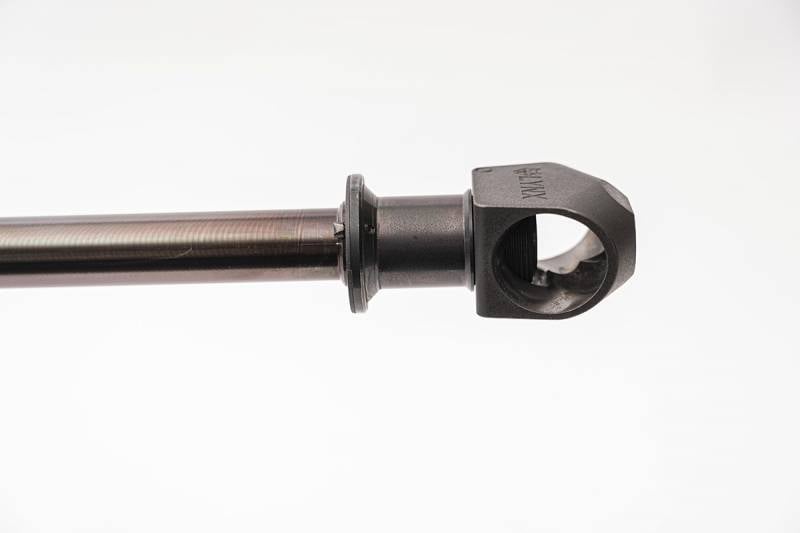 Muzzle brake. Photo: gm6lynx.com
Ammunition is fed from detachable plastic box magazines. Sights can be mounted on it both optical and mechanical, and it naturally has a Picatinny rail, integrated directly into its design. Also, for additional accessories and attachments, there are additional guide rails on the barrel cover. That is, if you wish, you can add weight to this rifle in full! 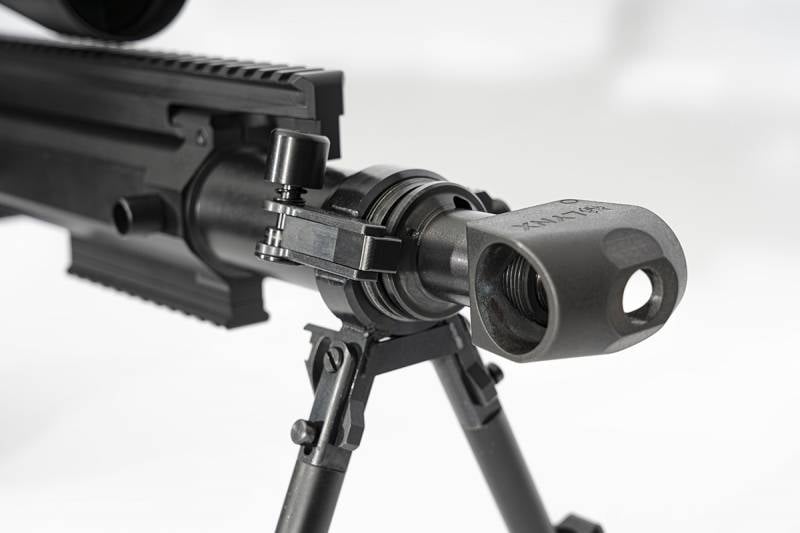 Bipod and its mount on the rifle. Photo: gm6lynx.com 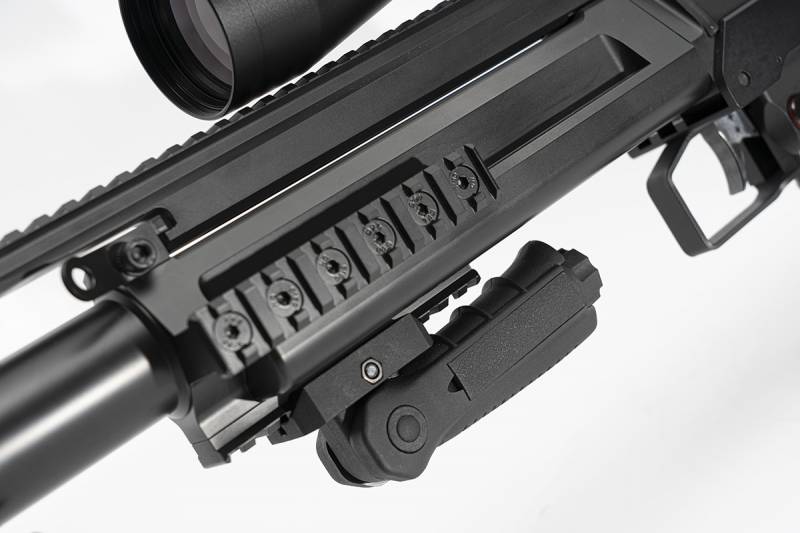 The tactical grip is in the folded position and the Picattini rail located on the left. Photo: gm6lynx.com
The foldable bipod is attached to the front of the barrel shroud on the right side and has height-adjustable legs. The installation of a rubber butt plate also helps to reduce the recoil force. So, as already noted, you can even shoot from it with your hands, although it is a "pleasure" for physically strong people! 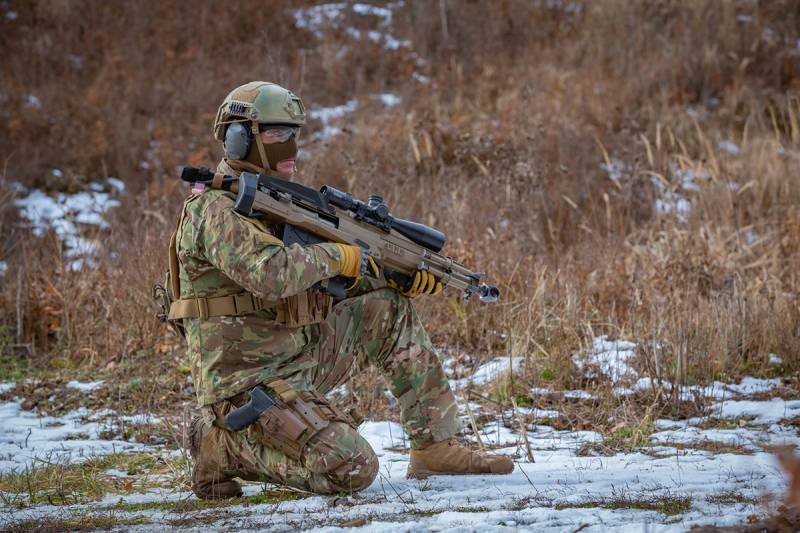 The shooter is waiting. The barrel is pushed into the butt. But as soon as the arrow is pressed on the barrel stop button, it will immediately move out of the butt and at the same time will be charged. So all he has to do is aim and pull the trigger! Photo: gm6lynx.com
A regular rifle bullet at a distance of 100 meters penetrates through a 25 cm concrete wall, and an armor-piercing one is even more effective: it penetrates a homogeneous steel armor 2 cm thick at a distance of 100 meters. An important advantage of this rifle is its multi-caliber capability. By replacing the barrel, bolt and magazine, the Lynx GM-6 rifle can be easily turned into a weapon capable of alternately firing both 12,7x99 (.50 BMG) and 12,7x108 cartridges.

In a word, the rifle from the Hungarian designers turned out: A - unusual in all respects, and not typical for sniper rifles in general, and for large-caliber rifles in particular; B - efficient, easy to carry, and relatively lightweight; and C - the principle of operation of its automation is the most simple. Needless to say: smart people in all respects did it! Well done!