Prospects and future of the Russian fleet

The new state program developed by the St. Petersburg Central Scientific Research Institute named after academician. N. Krylova together with the Ministry of Industry and Trade is based on the implementation of 5 of previously announced federal target programs: “Development of civilian marine technology for 2009-2016 years (RGMT-2016), RGMT-2025, which will be operational from 2017 and RGMT-2030, as well as Development of OPK-2020 ”and“ Development of OPK-2025 ”. Thus, the timing of the implementation of the new program covers the time period to 2030 year. At the same time, the bulk of funds for technical re-equipment of enterprises will be sent to the defense sector.

According to Kommersant, the total funding for the program will be 1,3 trillion. rubles, while the bulk of the amount (940 billion rubles) will be spent on “preserving, strengthening and developing the design, scientific and production potential of the industry”, approximately 319 billion rubles will be spent on “developing advanced scientific and technical potential and modern technologies required for the development of promising marine technology. " Another order of 45 billion rubles will be aimed at “achieving in the Russian shipbuilding the level of advanced countries in terms of manufacturability, product quality, and labor productivity. It is planned to invest about 0,7 billion rubles into training for the industry. At the same time, as the sources of Kommersant note, the final parameters of the program are currently in the “discussion” stage and can be adjusted. 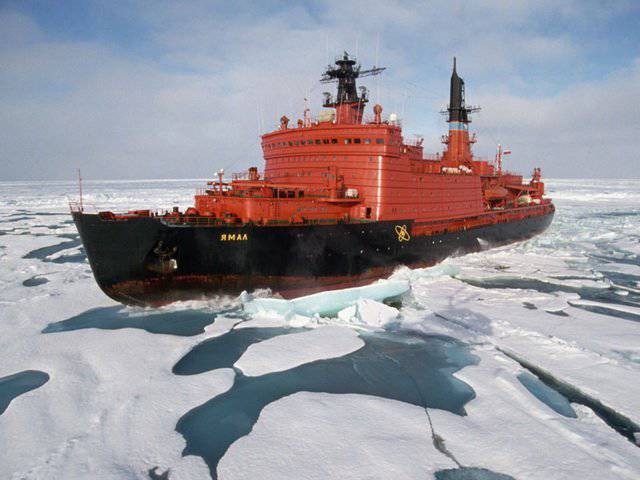 As part of this program, the Ministry of Industry and Trade expects to achieve a return on investment of budget funds at the level of 1,59 rubles. for every ruble of investment. The above presentation states that the additional revenue from investments may amount to more than 25% or 350 billion rubles. At the same time, as part of the implementation of the program, the industry should receive about 20 thousands of new jobs, and the return on investment is planned to be achieved in 10 years.

The main focus of the civil part of the program will be on large shelf and arctic projects, in particular, RGMT-2025 is focused on their implementation. The main objectives of this program are “effective development of offshore hydrocarbon deposits in the Arctic”, as well as “ensuring the effective operation of the Northern Sea Route”. Russia's needs for icebreakers up to 2020 are estimated at 26 units (including 6 nuclear-powered icebreakers — 1 with a capacity of 110 MW and 5 with a capacity of 60 MW). In addition, Russia needs 230 tankers, as well as 40 new gazauzoakh. The total demand for ships for offshore development is of the order of 130 units, of which 30 falls to platforms and 90 to support ships. In general, according to the Ministry of Industry and Trade, the need of Russia for civilian marine engineering is 1 400 vessels.

The emphasis of civilian shipbuilding on the production of ice-class ships and offshore technology is logical because of export potential and domestic demand — in other segments, which include, for example, barges, it will be very difficult to withstand competition with Chinese and South Korean manufacturers. industry of the State Duma of Russia Vladimir Gutenev. At the same time, far from all the offshore projects are being implemented in Russia, on which the producers were very much counting. For example, development of the Shtokman field located in the Barents Sea was postponed indefinitely. 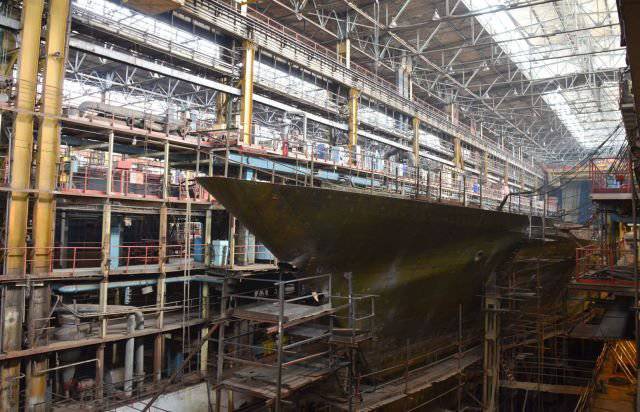 Shipbuilding program under the HPV-2020

Until 2020, as part of the implementation of the state arms program, it is planned to spend about 20 trillion on the re-equipment of the army. rubles. At the same time, the shipbuilding program within the framework of GPV-2020 is one of the most costly and problematic industries. Only for updating Russian fleet It is planned to spend about 5 trillion. rubles. At one time, Anatoly Serdyukov called the prices announced by shipbuilders “wild.” But this wildness has its own explanation. The long cycle of construction of large surface and submarine warships amid rising prices for components, materials, energy and ongoing structural inflation negatively affects the pricing of the industry.

At the same time, as an additional factor of significant growth in prices for the mass production of new submarines in comparison with the head boats, there was also widespread use in their construction of metal structures from other submarines, the construction of which was "frozen" in the early 1990-s. Despite all this, the task of updating the naval composition of the Navy will have to be solved in any case. According to the decisions that were taken during the formation of the general appearance of the LG-2020, it is planned to spend about 4,7 trillion on the needs of the fleet. rubles, while about 1 / 3 of this amount will be spent before the 2015 year.

Along with this, at the beginning of 2012, Deputy Prime Minister Dmitry Rogozin said that in 2011, the shipbuilding industry had a significant decline in production volumes - by 16,2%, to 211,5 billion rubles. At the same time, the composition of the Russian Navy in its quantitative composition closely approached the minimum necessary level for solving various kinds of combat missions. That is why Russia just needs an urgent renewal of the fleet of warships. 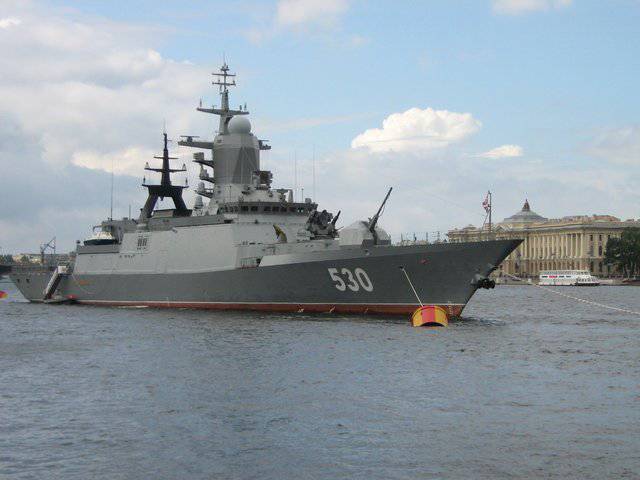 The upgrade of the nuclear submarine fleet of Russia is associated with 2-I new platforms: the multi-purpose submarines of the project 885 "Ash" and the strategic submarine missile carriers of the project 955 "Borey". At present, the 2 submarine of the Borey project, the submarine Yury Dolgoruky and Alexander Nevsky, as well as the lead ship of the 885 project, the Severodvinsk, are on trial. Before 2020, the Russian fleet should receive, in addition to the already existing submarines, at least 6 strategic missile carriers (to be built according to a modified project), as well as at least 9 multi-purpose submarines of the modernized 885M project

If we talk about non-nuclear submarines, the situation here is not so rosy. An attempt to put the 677 “Lada” submarine with air-independent engines into service with the fleet has not yet succeeded. The head boat of this series, the St. Petersburg, is still in trial operation, and the 2s of other boats, the Kronstadt and Sevastopol, are likely, if they are completed to the end, then by a modernized project. Under these conditions, it is advisable to recognize the decision according to which, to replenish the submarine group of ships of the coastal zone, the fleet command began to place orders for the already developed platform - the boats of the 636.3 Varshavyanka project. The first contract for the construction of such boats 3-x has already been concluded. In total, for the needs of the Russian Black Sea Fleet, it is planned to build 6 submarines data.

The surface grouping of the Russian fleet, it was decided to update the "bottom". Currently, the military department is working on the issue of the appearance of a promising aircraft carrier, but the construction of such a ship is not included in the plans to re-equip the fleet before 2020. At the same time, it is planned to implement a program for the construction of ships of the ocean zone - “corvettes” and “frigates”. In this case, the ships of the project 22350, which at one time served as a universal platform for warships of the main class, while stalled with the commissioning. The lead frigate "Admiral Gorshkov" was laid back in the 2006 year, the launching of the ship took place in the 2011 year, while the second ship of the project "Admiral Kasatonov" was laid only in the 2009 year. By the construction of other ships from this series in 8 units at the "Northern Shipyard" have not even transgressed. At one time, even voiced figures about the construction of 20-30 ships of this project, but today these figures look clearly unrealistic. 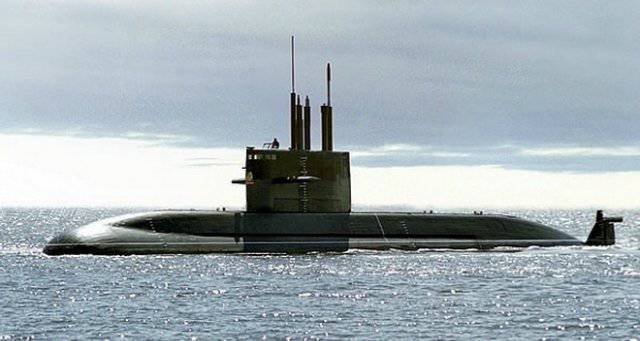 On the basis of this, the fleet command decided to resort again to the previously tested method: the rapid contracting of a spent export project, which is being reworked for Russian needs and realities. It was in this way that the 2 contract for the construction of the 11356M frigates, which represent a slightly reworked version of the frigates built according to the Indian Talwar project, appeared at the Yantar shipyard in Kaliningrad.

If we talk about smaller vessels, then a significant number of 20385 corvettes are currently contracted. At the same time, the troubles with the shipyard “Northern Shipyards”, where it was planned to build these ships, did not allow to debug the fast and rhythmic execution of this order. At the moment, the Northern Werves are under the operational control of USC, which may entail the transfer of the order to other shipbuilding enterprises, but in any case, work on these corvettes will follow a realistic schedule.

In addition to warships, the composition of the Russian fleet by the end of 2020 of the year must be replenished with various auxiliary vessels. According to the Deputy Minister of Defense of Russia, General of the Army Dmitry Bulgakov, 2020 auxiliary ships for the fleet are planned to be built until the year of 96. In the 2012 year, contracts were already signed for the purchase of the first 5-auxiliary vessels. According to Dmitry Bulgakov, at present, the Ministry of Defense is purchasing only complex logistics and technical support vessels. Everything necessary will be provided on each of these ships: from the availability of fire extinguishing equipment to food, water, fuel, various military equipment, including ammunition and missiles, the general noted.

In general, it is worth noting that the bulk of orders for the LG-2020 have yet to be formed in the 2015 area of ​​the year, so that Russian shipbuilders have a small amount of time to prepare.