SAM TOR-M2E nicknamed "cleaner" for the reflection of any goals 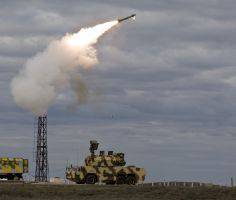 The TOR-M2E anti-aircraft missile system is a representative of a new generation of Russian short-range air defense weapons. Designed to repel massive air attacks, the air defense system is capable of hitting any target. At a distance of 12 kilometers, it can destroy an airplane, a “drone” and guided missiles flying at altitudes up to 10 thousands of meters. The search for targets occurs automatically during the movement of the combat vehicle. Missiles are launched at a short stop.

"ТОР-М2E" is the only complex in the world that can simultaneously attack four targets. Its electronics can distinguish targets even through strong radio-electronic interference. The air defense system is capable of protecting the ground forces during movement, administrative and military facilities and complies with the modern concept of "contactless war".

The anti-aircraft missile system exists in two variations: on a tracked and wheeled chassis. The second option is intended, as a rule, for export deliveries so that the machine “does not damage the asphalt”.

There are still no analogues of the TOR system in the world. It is planned that the upgraded complex will begin to come into service with the Russian army from 2011 onwards.