From HMMWV to ISV. Procurement of automotive equipment for the US armed forces 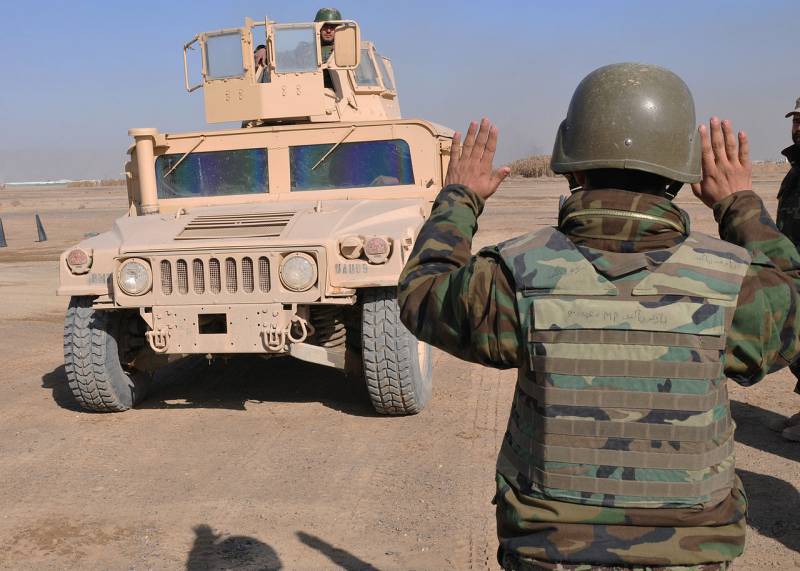 HMMWV car of one of the combat units

The US armed forces have several hundred thousand vehicles of various classes and models. Armored and unprotected vehicles for the transport of personnel with some cargo constitute a significant part of this vehicle fleet. Several types of such equipment are now in serial production, and we are talking about both modern and old models.

The main vehicle for soldiers in the US Army is still the HMMWV / Humvee multipurpose vehicle. It was accepted for supply in the early eighties, and now a program is underway to replace it with modern technology. Nevertheless, at least 120-130 thousand vehicles remain in service - unprotected and armored vehicles, carriers of various weapons, special modifications, etc.

Despite obsolescence and plans for replacement, the HMMWV remains in service and in production. So, in August 2017, the Pentagon issued another order to AM General for the production of new cars for transfer to third countries. By the end of February 2023, the contractor should have built 11560 vehicles with a total cost of just over $ 2,2 billion - approx. 191 thousand dollars each.

It is proposed to resume purchases of HMMWV for their own needs. The new military budget for FY2022 is. substantial expenses are envisaged for the operation of the existing vehicle fleet. It is also possible to launch a new program for the modernization of equipment. As required, combat Humvees will undergo modernization with the replacement of the power plant, general and auxiliary systems, etc. 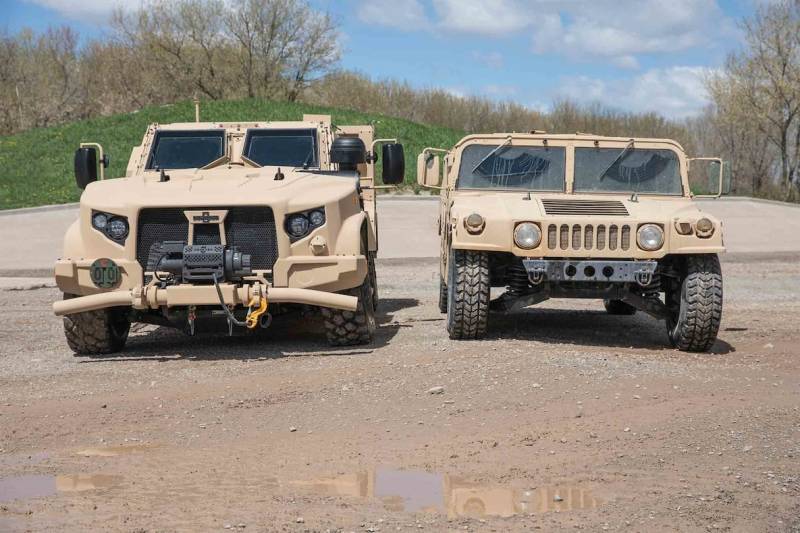 Old Humvee (right) and modern JLTV
The military still retains tens of thousands of original unarmored HMMWVs and must be disposed of. To do this, the authors of the budget proposed to resume purchases of cars in the M1152A1 and M1165A1 modifications of the new production. The exact plans of this kind have not yet been approved and the contracts have not been signed. Accordingly, the number and cost of the newly purchased armored cars remain unknown.

It was proposed to free up part of the funds for the purchase of new Humvees by reducing plans to purchase new JLTV armored vehicles. In this sentence, you can see the evil irony of fate. The fact is that JLTV was created as a modern protected functional analogue of HMMWV. According to the initial plans, this armored car was supposed to completely replace the old cars - but this turned out to be impossible.

The winner of the JLTV program was determined in August 2015 - it was the L-ATV armored car from Oshkosh. Then a preliminary contract for serial production was signed. It provided for the production of 16901 armored vehicles with a total cost of up to $ 6,75 billion, as well as the supply of necessary spare parts and support. Thus, the average cost of each serial sample, including all additional costs, reached the level of $ 400 thousand.

In March of the following year, the Pentagon issued the first order for the production of such equipment. The contract, worth $ 243 million, provided for the supply of 657 armored cars and the necessary spare parts, as well as the provision of support for some time. This means that in a real series, the cost of the machine and additional units / services was reduced to $ 370 thousand. 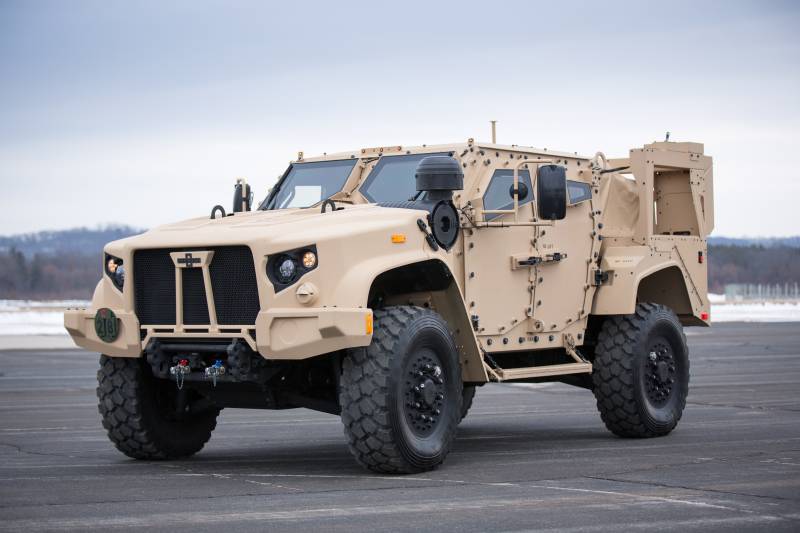 Subsequently, the Oshkosh company received new orders for the supply of different quantities of equipment. In mid-2019, she was given permission to start full-scale serial production. This was followed by large orders for a large number of vehicles. So, in the plan for FY2020. The Pentagon included 2530 armored vehicles for the ground forces, 1398 units. for the Marine Corps, as well as 140 units. for the Air Force and 22 units. for the Navy - a total of almost 4100 vehicles.

The total value of these contracts amounted to $ 1,64 billion. The average price of an armored car reached the level of $ 400 thousand, which is significantly more expensive than the first series of vehicles. However, the rise in prices was not due to technical or production issues, but to inflation.

FY2021 almost $ 885 million was spent on the purchase of JLTV, and almost $ 575 million was requested for the next fiscal year. Such expenses allow building more than 2100 and 1400 vehicles, respectively. At the same time, the possibility of revising plans upward is not excluded.

At the moment, the Pentagon plans to purchase a total of 64500 JLTV armored vehicles by 2041. More than 49 vehicles will be delivered to the ground forces. The needs of the ILC are estimated at 16 thousand units. The Air Force requires only 2 thousand armored cars, and the fleet will purchase approx. 400 units 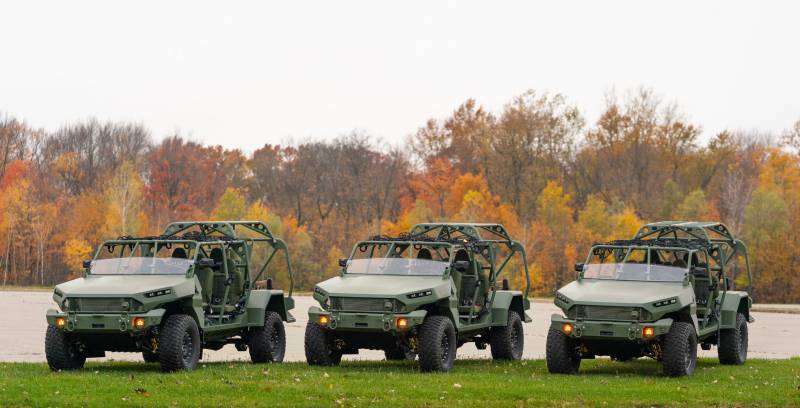 GM ISV light multipurpose vehicles
The numerical indicators of the plans have been repeatedly revised in the past, and it cannot be ruled out that they will be adjusted again in the future. JLTV plans to release another 20 years - and the customer has enough time for certain changes. At the same time, it is clear that the cost of serial equipment at current prices will remain at the current level, although nominal prices will rise for objective reasons.

Transport for the department

Recently, in 2019, the US Army launched the Infantry Squad Vehicle program, the goal of which was to find a light, unprotected vehicle capable of carrying an infantry squad with weapons and some supplies. In June of the following year, a project from GM Defense and Ricardo plc became the winner of the competition. At the same time, the first order for mass production "at a slow pace" was issued. Deliveries of the ordered ISVs began this year.

The first contract provides for the production of 649 vehicles with a total value of $ 214,3 million - 330 thousand each. The last batches of such equipment will be handed over to the customer until 2025 inclusive. ISVs are planned to be used in brigade tactical groups. The current order will allow equipping 11 such formations.

The general needs of the ground forces are estimated at 2085 ISVs. If the first batches of such equipment show themselves well in operation, new contracts for the next 1436 vehicles should be expected in the coming years. Apparently, the cost of serial ISVs will not fundamentally change in the future. 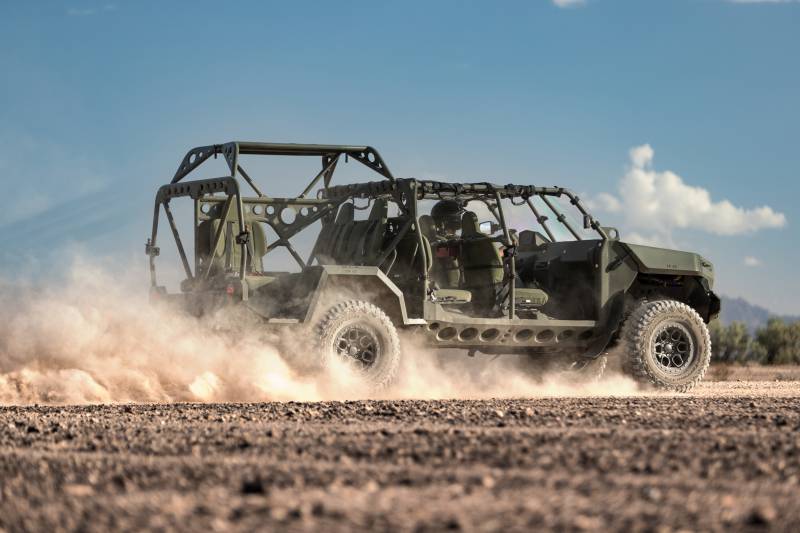 In the process of updating

Thus, the US military has the largest vehicle fleet and is taking the necessary measures to maintain it in the required condition. For this, the repair and modernization of existing equipment is carried out, as well as new samples are purchased. All categories of equipment are being updated, but the priority area is armored and unprotected vehicles for personnel, on which the combat effectiveness of a number of formations actually depends.

In recent years, serious changes have been observed in the field of such transport, but their scale and results have not yet met all expectations. In addition, the Pentagon had to revise its plans due to objective restrictions. Perhaps, in the foreseeable future, plans and procurement schedules will be adjusted again in connection with certain factors.

One way or another, now different tasks in the context of transporting and ensuring combat work of soldiers are solved using several types of equipment, some of which are in the same niche and duplicate each other. So, despite all the attempts and plans, the old and outdated HMMWV car remains the main model in this category, and it will not be abandoned in the foreseeable future. The newer JLTV, with all its advantages, has not yet become truly mainstream.

According to the latest information, there are no prerequisites for a fundamental change in this situation. At the same time, the purchase of new samples and the gradual write-off of obsolete equipment in the future will affect the overall quantitative and qualitative indicators. However, the implementation of all approved plans for the next two decades is not guaranteed - the vehicle fleet renewal program may face new difficulties.