Light attack aircraft A-37 Dragonfly: a successful aircraft for its niche 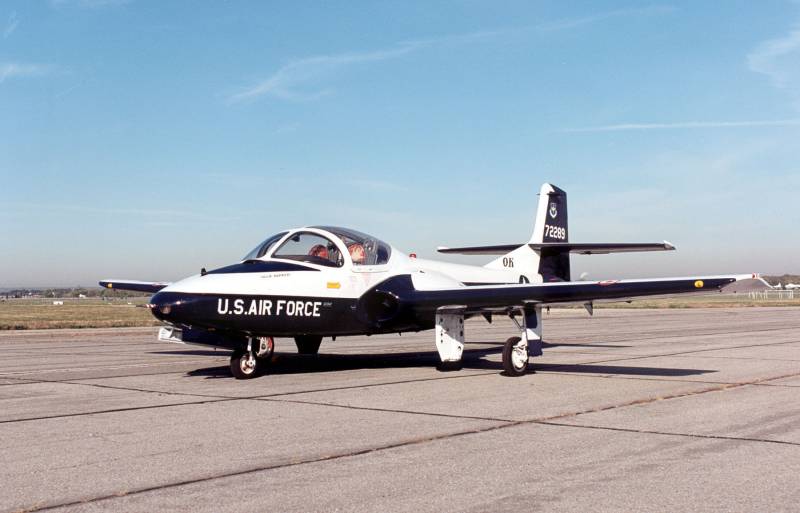 During the Vietnam War, the United States and its allies actively used several types of tactical attack aircraft. The light attack aircraft Cessna A-37 Dragonfly is deservedly considered one of the most successful representatives of this class. This machine, developed on the basis of the existing training aircraft, showed an advantageous ratio of technical and combat characteristics, and also fully corresponded to the assigned tasks.

In the early sixties, against the backdrop of a deteriorating situation in Vietnam, the US Air Force began searching for a promising "anti-guerrilla" attack aircraft. In 1962, the Air Force examined the combat potential of the existing Cessna T-37 Tweet trainer and came to positive conclusions. After certain modifications, this machine could become a good strike aircraft. The terms of reference were soon drawn up and Cessna was awarded a contract to carry out the necessary work.

In October 1964, the YAT-37D prototype took off for the first time, later joined by a second flight prototype. Based on the test results, the first production and delivery contract was signed. The Air Force ordered 39 aircraft with the new designation A-37A. To speed up the work, they decided to rebuild them from the serial T-37. In 1967, a contract was issued for the serial production of improved new A-37Bs.

Cessna continued to produce two versions of the A-37 Dragonfly until 1975. A total of 577 were built. In the early stages, the equipment was supplied only to the US Air Force, and later other American structures received it. Since the late sixties, more than 250 aircraft have entered the Air Force of the Republic of Vietnam. About a hundred of these vehicles later became trophies of the Democratic Republic of Vietnam and were even used in battles. 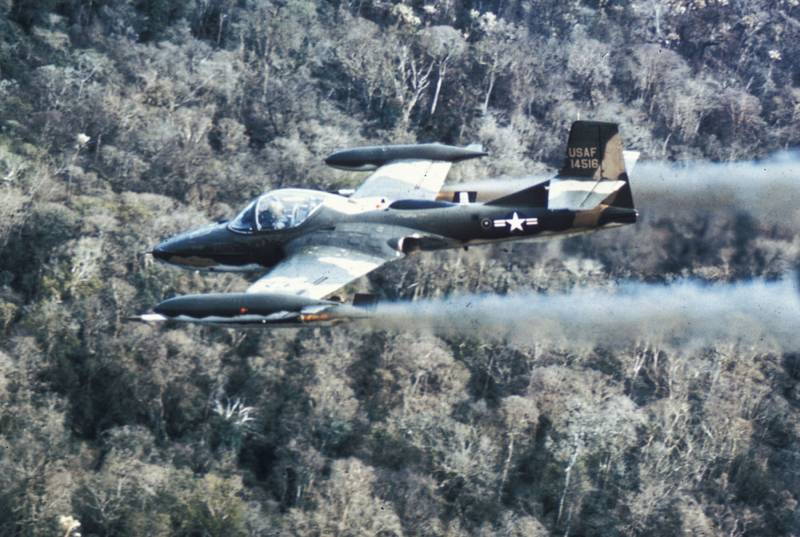 Serial attack aircraft A-37B in flight
Already in the mid-seventies, the United States began to sell the remaining aircraft, and they hit 12 foreign countries. The new owners have repeatedly used this technique in various wars and operations. Operation of the A-37B is still ongoing in six countries, and often such equipment has to be involved in real combat missions.

During the Vietnam War, Dragonfly aircraft showed fairly high combat qualities. In total, they made more than 160 thousand sorties and delivered tens of thousands of tons of bombs and missiles to their targets. At the same time, high survivability and stability were shown. Attack aircraft operated only at low altitudes and were constantly bombarded from the ground. They regularly returned to base with various damages, but the US Air Force recorded only 22 aircraft in combat losses. The losses of the South Vietnamese Air Force were at about the same level.

The high technical and combat qualities of the A-37A / B aircraft were primarily determined by a fairly successful design. At the same time, the choice of the basic platform in the form of the T-37 trainer made a significant contribution to the overall results. The latter showed fairly high flight performance and had a good modernization potential, due to which it was possible to create a new attack aircraft.

In the course of such a restructuring, the general architecture and layout of the airframe did not change. At the same time, they developed a new reinforced wing with pylons for a combat load and additional fuel tanks at the tips. The chassis was also strengthened for work on unpaved airfields. The avionics complex was supplemented with new means required for combat use. 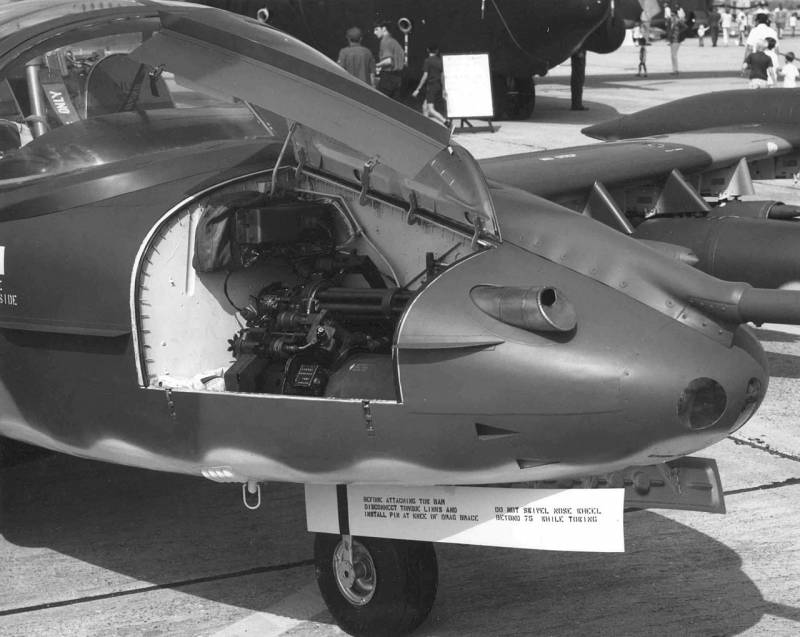 Bow compartment with built-in machine gun
As a result of all such modifications, the weight of the aircraft increased from the original 3 tons to 6,35 tons, which required new engines. The Teledyne J37-T-69 engines standard for the T-25 were replaced with a pair of General Electric J85-GE-17A. These measures did not require a radical revision of the airframe, but compensated for the increase in mass and even increased the overall thrust-to-weight ratio.

The heavier attack aircraft with new engines had a maximum speed of 816 km / h versus 684 km / h for a training aircraft. At the same time, the stall speed was only 182 km / h. Thus, the shock A-37 could quickly arrive at a given area, and then, after slowing down, look for targets and attack them.

The T-37 had a two-seat cockpit with pilots seating side by side. The cockpit was distinguished by low sides and received a large area canopy, which significantly improved the forward, sideways and downward visibility necessary for searching and hitting ground targets. The pilots' seats received booking, and the sides of the cockpit were equipped with anti-splinter lining.

Both workplaces provided full control of the aircraft and the solution of combat missions. In practice, such control capabilities have been used in an interesting way. So, the pilots flew one at a time to attack, and the reconnaissance and correction flights were carried out together. 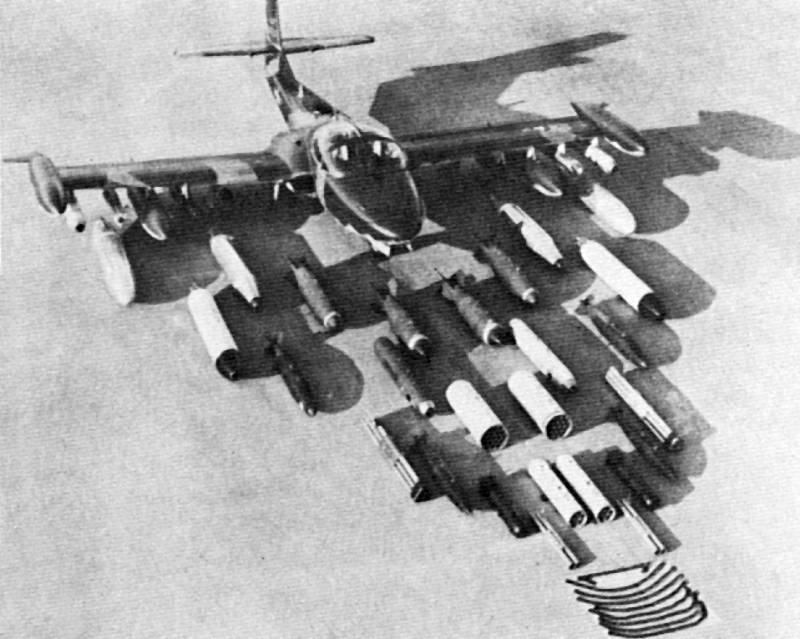 Armament display
With all the advantages, the aircraft remained quite simple in technical and operational terms - especially against the background of modern fighter-bombers. Due to the simplicity of the design as a whole and its individual elements, minimal maintenance was required. So, for one flight hour there were only two hours of various work on the ground.

At the request of the customer, the "anti-guerrilla" attack aircraft was supposed to have built-in machine-gun armament and carry a wide range of bombs, missiles and incendiary tanks on the external sling. By modernizing the basic training platform, these tasks have been successfully solved. The attack aircraft could carry more than 2700 kg of combat load. The normal load was 1800 kg.

A 7,62-mm GAU-2B / A machine gun with a rotating barrel block and a box for 618 rounds was placed in a voluminous nose cone. If necessary, the built-in machine gun could be supplemented by hanging containers with cannons of 20 or 30 mm caliber. However, this weapon was used infrequently, and was preferred over traditional air-to-surface weapons. 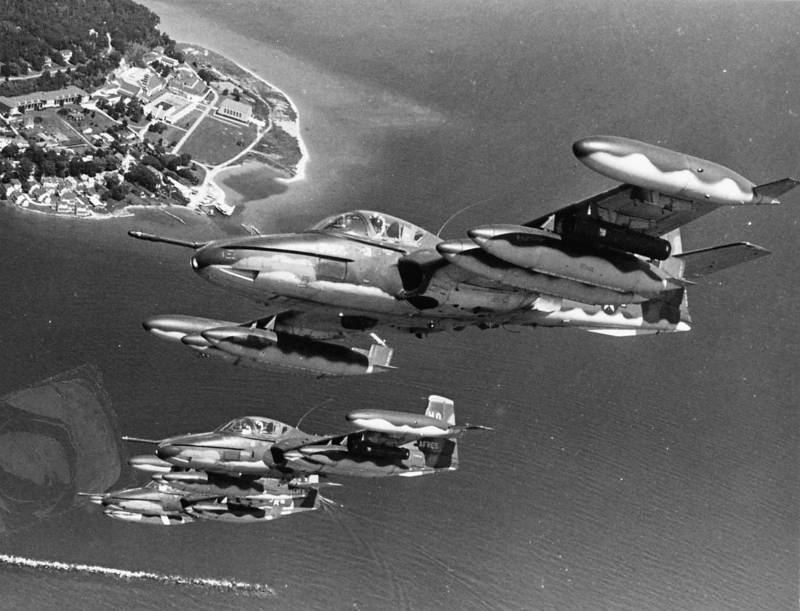 Under the reinforced wing of the Dragonfly, there were eight pylons for various weapons. Two internal pylons on each plane had a carrying capacity of up to 390 kg; the third carried 270 kg, and the outer one was loaded up to 230 kg. Such a set of suspension points with different capabilities made it possible to carry a wide range of ammunition and increase the flexibility of combat use.

Depending on the expected goals and assigned tasks, the A-37A / B could carry blocks of unguided missiles in the required number. In addition, various types of free-fall high-explosive fragmentation or cluster bombs were used, as well as incendiary tanks up to 750 pounds in caliber. Suspension of several outboard tanks was allowed.

Using unguided weapons, the Dragonfly attack aircraft demonstrated high combat characteristics and advantages over existing fighters. So, approaching a target with a relatively low speed made it possible to dramatically increase the accuracy of hitting missiles and bombs. In the main modes of use of weapons by an experienced pilot, the KVO did not exceed 15-20 m - better than that of other attack aircraft.

It should be noted that the Cessna A-37 Dragonfly attack aircraft had more than just advantages. There were a number of shortcomings, some of which worsened technical and combat characteristics, while others imposed restrictions or even increased risks for aircraft and pilots. However, this did not prevent the attack aircraft from reaching exploitation and did not have a fatal effect on the results of combat work. 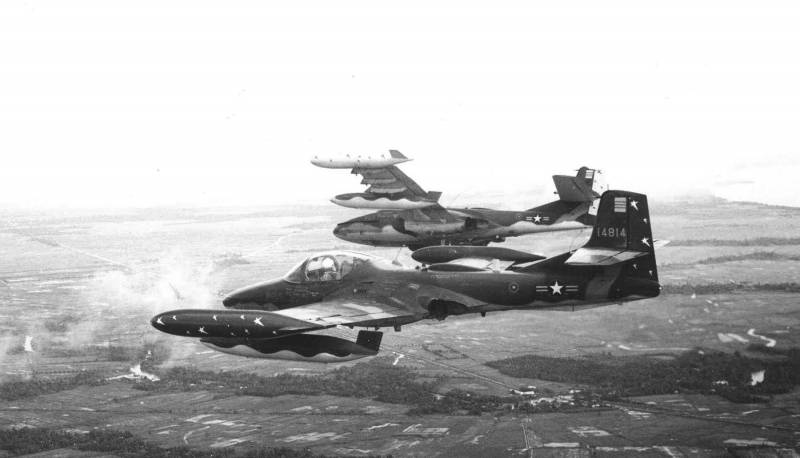 Perhaps the main problem of the A-37 aircraft was the lack of advanced protection. Armor of seats and lining could not protect pilots from all threats. In this case, vital units, incl. motors and key electronics had no protection whatsoever. Such an aircraft could only be used against an enemy with extremely limited anti-aircraft capabilities. Otherwise, the attack aircraft risked at least getting multiple damage.

The first version of the A-37A attack aircraft had insufficient range and combat radius. This problem had to be solved using a refueling system with a specific placement of the units. In addition, quite often the plane carried a whole set of suspended tanks, which took the place of weapons under the wing.

Significant restrictions on combat use were imposed by the absence of any optical means and weapon control systems. The pilot had to rely only on his eyes and a reflex sight. Accordingly, the results of the strikes directly depended on the skills and abilities of the flight personnel, as well as on meteorological conditions, enemy camouflage and other factors. In addition, the effectiveness could be affected by the limited combat load, at which the attack aircraft was inferior to other aircraft of its time.

The light attack aircraft Cessna A-37A / B Dragonfly had serious advantages and noticeable technical and other disadvantages. At the same time, according to the experience of combat use during the Vietnam War, it is considered almost the most successful aircraft of its class at that time. The reasons for such assessments are clear and understandable. 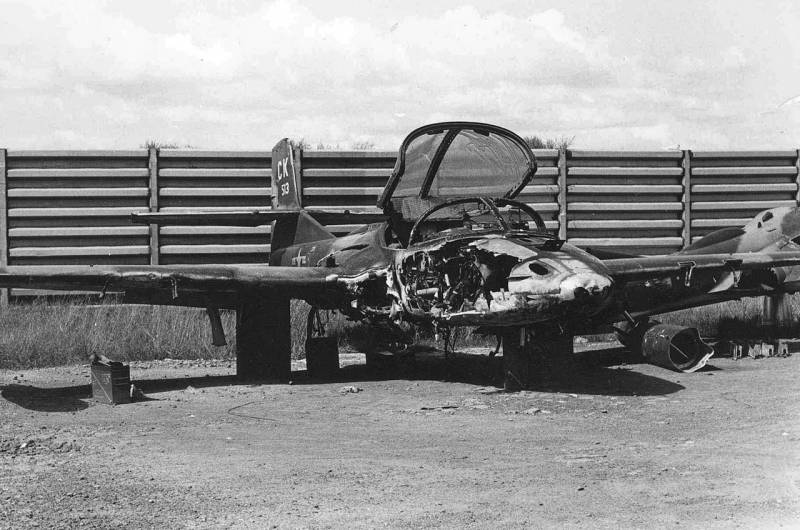 Lost aircraft of the 605th US Air Force Special Operations Squadron. During the flight, the attack aircraft was damaged, lasted until the base and caught fire only after landing. October 1968
The A-37 project was developed with the aim of quickly filling the niche of the "anti-guerrilla" attack aircraft. This niche has specific requirements, but does not impose serious restrictions. In particular, such an aircraft is not required to have outstanding speed or altitude characteristics, but it must be able to patrol for a long time, carry significant ammunition and effectively engage small targets.

The A-37 of both modifications generally met these requirements. Its flight performance made it possible to fulfill all assigned tasks. With a competent organization of combat work, it was possible to fully realize all the advantages of this aircraft and level its disadvantages. It was due to this that it was possible to conduct 160 thousand sorties in Vietnam and solve most of the combat missions at the cost of minimal losses.

In this way, история attack aircraft A-37 Dragonlady clearly shows that the development of a specialized aircraft for a specific narrow niche allows you to solve urgent problems and give the Air Force the desired capabilities. At the same time, such a solution may turn out to be a compromise and inappropriate for other tasks. Serial A-37Bs are still in service with several countries and are even used in various operations. But the real "finest hour" of this technique has long passed - and in the current conflicts, "full-size" attack aircraft and fighter-bombers take over the main work.