Do we need such ships at sea? 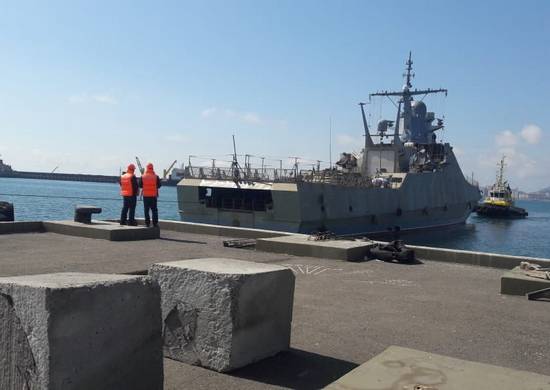 A very peculiar, I would say, a twofold situation has developed. On the one hand, the patrol ship of project 22160 "Sergei Kotov" went to sea for testing - this is, given our position with the ships, a very joyful event. Moreover, the "Sergei Kotov" is the fourth ship in the series, which replenishes the ranks of the Black Sea fleet Russia. 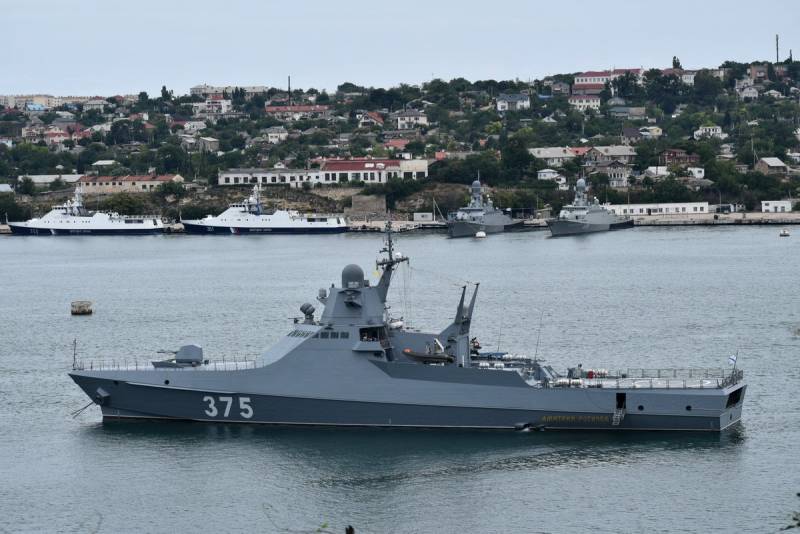 By the end of the year, "Sergei Kotov" will undergo scheduled tests, after which the ship will officially enter the ranks of the Black Sea Fleet.

It's good? Partly. The bad thing about this news the fact that "Sergei Kotov", how to put it mildly ... a defective ship.

No, as just a patrol ship, whose tasks include the usual patrolling of the water area, the project 22160 ship is quite good. Especially those ships with domestic Kolomna diesel engines. Maybe not as fast as under the German MTU, but it is reliable and maintainable.

In general, patrolling territorial waters, a 200-mile economic zone, in both open and closed seas. Suppression of the activities of pirates and smugglers, escorting ships and vessels, if necessary, the protection of naval bases and water areas, intelligence activities. This is in peacetime.

In wartime, the value of corvettes drops sharply. The initial set of weapons on ships is more than modest. One 76,2 mm AK-176MA artillery mount (side-by-side 304 rounds) and two 14,5-mm machine guns in the MTPU "Sting" mounts. Plus there are also 12,7 mm grenade launchers and machine guns.

The missile armament of the corvette consists of eight Igla-S or Verba MANPADS. That is, a little more than nothing. In principle, with the help of cannon artillery and MANPADS, the corvette can turn out to be a dangerous enemy for a pair of helicopters. But nothing more. In order to become a more serious ship, you need more serious weapons. But he is not.

But if we talk about something more serious than grinding salt water with screws - here corvettes do not look very serious yet.

Yes, the ships are listed in the project as the first modular ships in Russia. That is, in principle, the project 22160 corvettes can be retrofitted with any weapon in theory that will be placed in container installations. 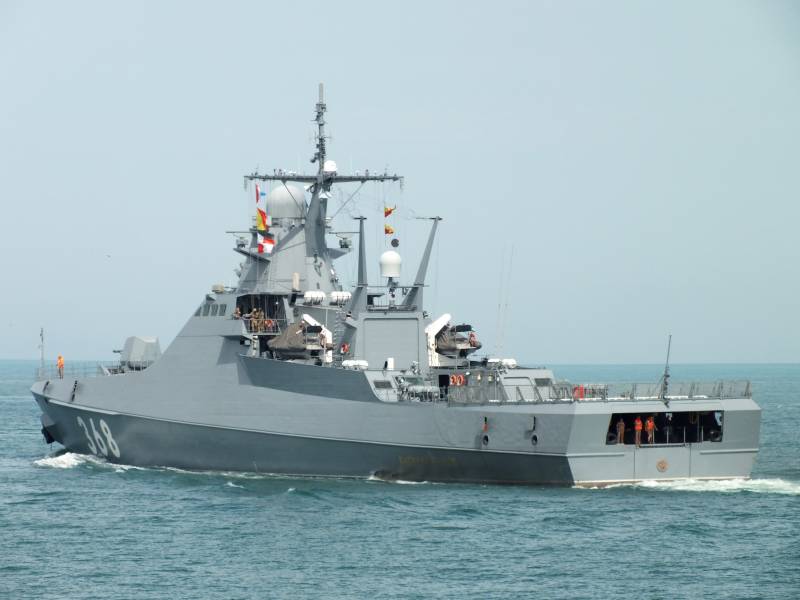 Photo: Artyom Balabin / balabin-1712.livejournal.com
It was due to the modules that it was planned to equip ships with various shock systems. Strike missile, anti-submarine, air defense systems and so on. You can fantasize endlessly.
However, things are not as simple as we would like.

And modules were to be developed simultaneously with BIUS. And then the picture would be simply magnificent: the ship has an excellent operating system, modules that can be changed depending on the requirements of the moment, and the system will perfectly manage the modules in any situation.

Everything is good, except for execution.

In the USA, two lines of coastal modular ships were developed at once, the Freedom and the Independence. Ships Littoral combat ship (LCS) is an interesting development, but, alas, not devoid of drawbacks, the main one of which was problems with propulsion systems. 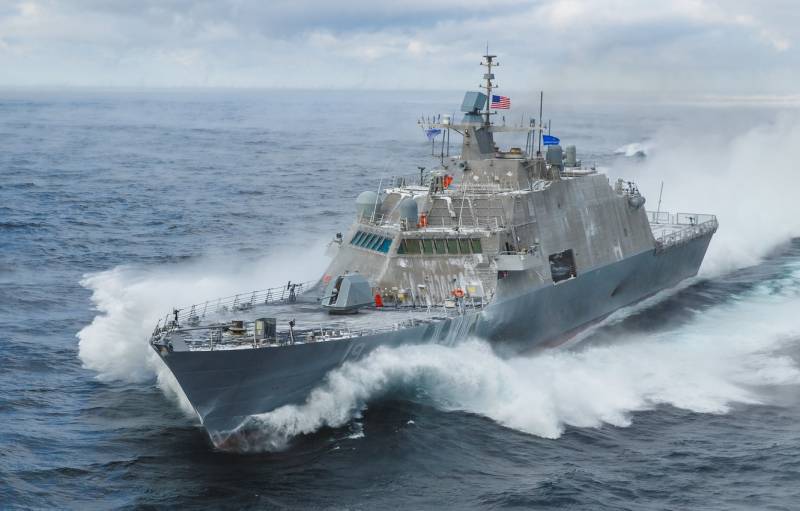 However, there were two more problems that the Americans could not solve and eventually abandoned the construction of littoral ships in large numbers. Indeed, the $ 500 million cost WITHOUT modules is overkill.

And the modules in the USA ... were not completed either. They re-equipped the ships so that they could at least fight off the aircraft in close combat, and that's all. It is not for nothing that in the American navy the Littoral combat ship is voiced as Little Crappy Ship.

It is worth noting here that our project 22160 corvettes differ very favorably from American littoral ships precisely in terms of seaworthiness. In general, if corvettes have advantages, then it is just good seaworthiness, decent speed and more than sufficient cruising range. 25 knots at full speed and 6000 miles at 16 knots - this, of course, is not like the American ships, but our corvettes develop these figures and reach without fatal breakdowns, like the American littorals.

So Russian modular corvettes are still quite decent coastal patrol ships. The combat capabilities with the weapons on board are, of course, minimal. Anti-terrorist operations and actions against smugglers and nothing more. 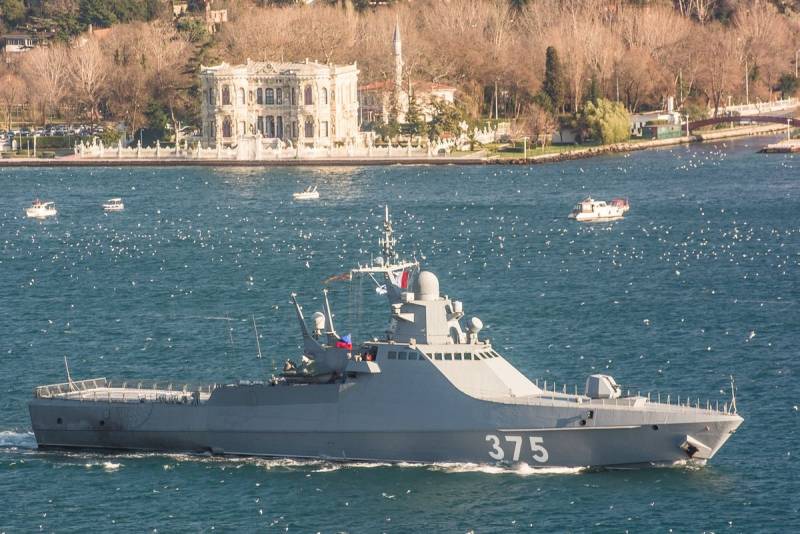 Photo: Ministry of Defense of the Russian Federation
It is worth remembering that project 22160 began to be developed at the beginning of the XNUMXs, when everything was not so clear with the American littorals. They were just being built, and then it was too early to draw conclusions about how successful the ships were and whether modular aspirations would be economically justified.

At first everything seemed very interesting with the modules. Indeed, it looked very progressive: missile launchers, sonar equipment, premises for the squadron headquarters, a hospital - the ship could acquire any configuration depending on the requirements of the moment.

There was only a moment at which for each ship it was necessary to have several crews, for each set of modules.

Many countries have followed this path. The Americans, of course, became the first, and then it turned out that everything is not as great as we would like in terms of modularity.

It turned out that ships plus modules are much more expensive than just normal ships. Plus, the change of modules, which some thought was something like changing SIM cards, turned out to be a somewhat longer process than the 48 hours declared in the project. It turned out that changing the module on the "Freedom" can take up to a month. It is not easy to take out one container and insert another in its place. Reconnecting communications, adjusting and setting up equipment - all this may require many times more time.

The result was the recognition of the Americans in 2016 that all littorals will be completed in different configurations, without regard to modularity.

All the planned twenty-four ships, including those that will only be built, will be divided into six divisions. Three divisions for the Independence class and the same for the Freedom class. Each division will be equipped with its own types of modules - anti-mine, anti-submarine and module for fighting boats and boats.

Ships in divisions will work out exclusively their tasks, for which they are oriented. There will be no replacement crews.

This is how the modular program in the United States died. And what about Russia?

In Russia, everything is about the same. There are modular ships, but no modules. More precisely, there are a couple of exhibition samples that are shown at various exhibitions.

However, we also found out that building a full-fledged ship is much cheaper than a modular one and modules for it. But the main thing is that it is inevitably increasing not only financial costs, but also the human factor. The modules will need to be serviced, this will require teams of specialists, which will also entail additional expenses.

But, it should be said that adequate solutions have not yet been found in any country. There is an opinion that it is still easier to build ships and equip them, and then purchase additional equipment for them.

The result is a very peculiar situation: there are ships, but there are no additional equipment in the form of modules for them, and as it becomes clear, it is not expected.

It is clear that all this did not come out of a good life for us. It was necessary to somehow compensate for the lack of new ships in the fleets. Moreover, the American idea gave hope for the emergence of universal and inexpensive ships.

As a result, we have four ships, which are patrol ships with no chance of becoming universal corvettes. And there will be six of them in total. Six ships with a decent displacement for this class, allowing to accommodate more serious weapons than the original.

And with domestic power plants, which is also very good. After all, only the first ship of the series was made with German diesel engines, the rest are and will be with Russian ones. This is a very positive point.

It turns out that new ships in an amicable way, immediately after testing, should be sent to factories and re-equipped there. Perhaps this is not the best scenario, but it may turn out to be the only one.

If you look at the displacement of the ships of Project 22160 (1800 tons total) against, say, small anti-submarine ships of the 1124M Albatross type (1080 tons total) and compare the amount of weapons on the ships, then obviously the Albatrosses are more armed.

That is, the ships of the project 22160 have where and how to install rockets, sonar stations and other useful things. You just need to modify the ships and at the exit get, albeit spending time and money, quite decent corvettes, capable of operating far from the coast.

This is better than holding on to this modular idea, which has not played even in more advanced shipbuilding countries.

In general, we really need new ships at sea. Capable of performing a variety of combat missions. And the presence of new ships with a displacement like a corvette, but armed with an anti-sabotage boat - we simply cannot afford this.