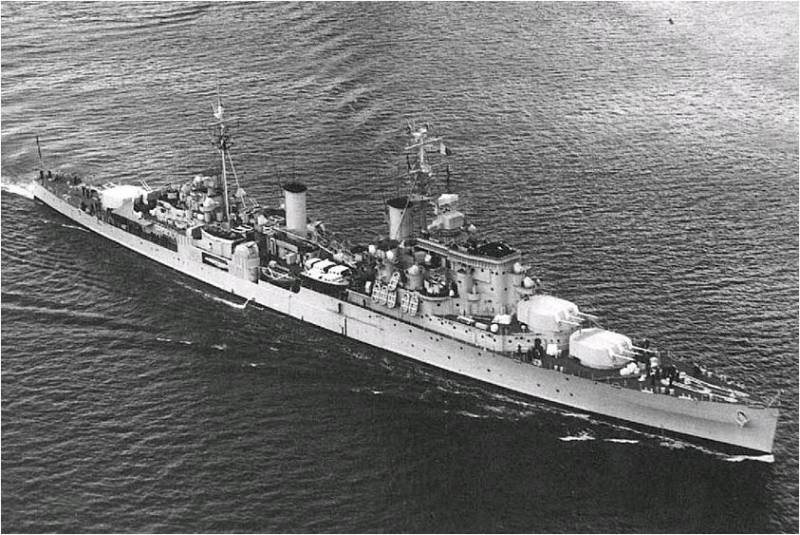 It is correct to call this series of ships by the name of the first one, type "Swiftsure". However, the name of the second ship in the series, "Minotaur", was somewhat more euphonic and romantic.


These two cruisers, the Swiftshur and the Minotaur, were the only light cruisers built in Great Britain during World War II. The third ship, "Superb", was completed after the war. The Minotaur was transferred to the Canadian Navy and renamed Ontario.

The result was not a modified type of "Fiji", but in fact a new type of light cruisers, which differed from the original, and quite significantly. The Minotaurs had better stability due to the increased hull width, greater cruising range due to increased fuel reserves, and significantly enhanced anti-aircraft armament. 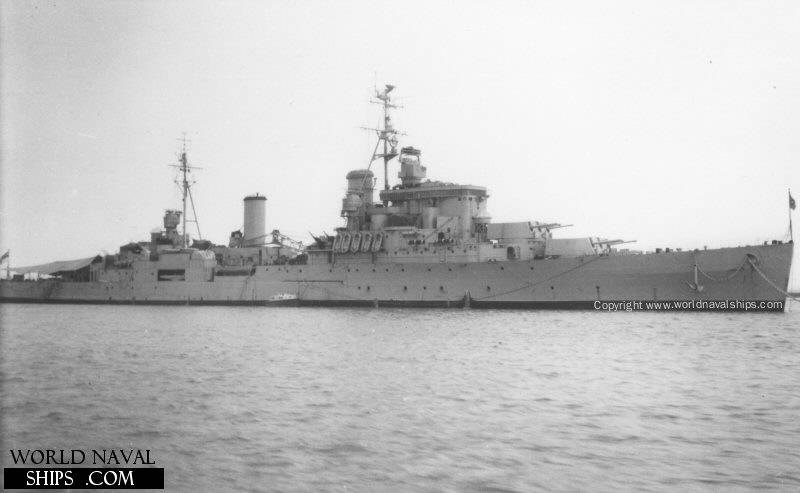 Moreover, almost did not have to sacrifice something.

The hull was made wider by 0,3 meters, which improved the stability of the ships. Aviation weapons were not installed, hangars were eliminated, which made it possible to reduce the height of the superstructure.

The British Admiralty concluded that the greatest threat to ships was in the air. Therefore, the "Minotaurs" was removed one stern tower of the main caliber, and instead installed anti-aircraft guns. 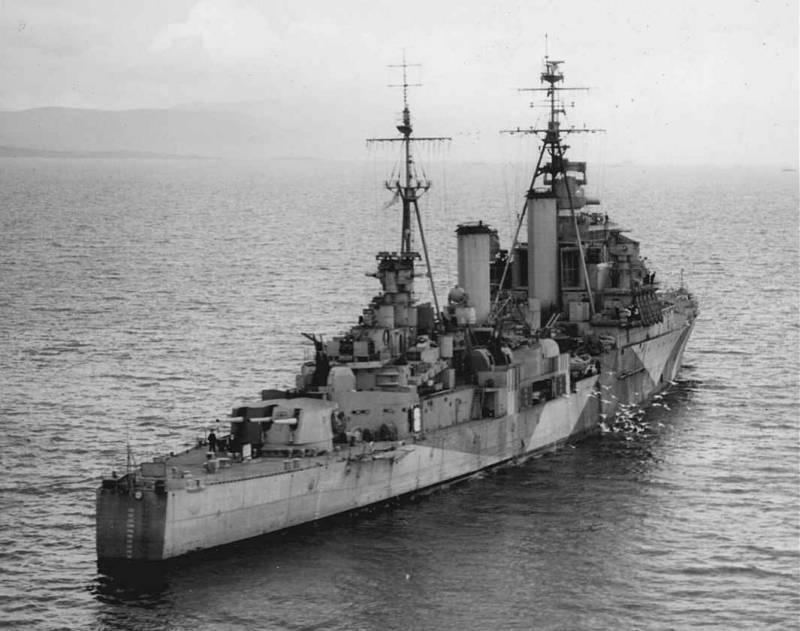 The booking of cruisers of the Minotaur class was exactly the same as that of the Fiji. The power plants were covered by an armored belt with a thickness of 83 mm and a traverse of 51 mm. The armored deck had a thickness of 51 mm, the same thickness were the turrets of the main caliber. The barbets of the towers were 25 mm thick. The artillery cellars were armored with sheets 83 mm thick. 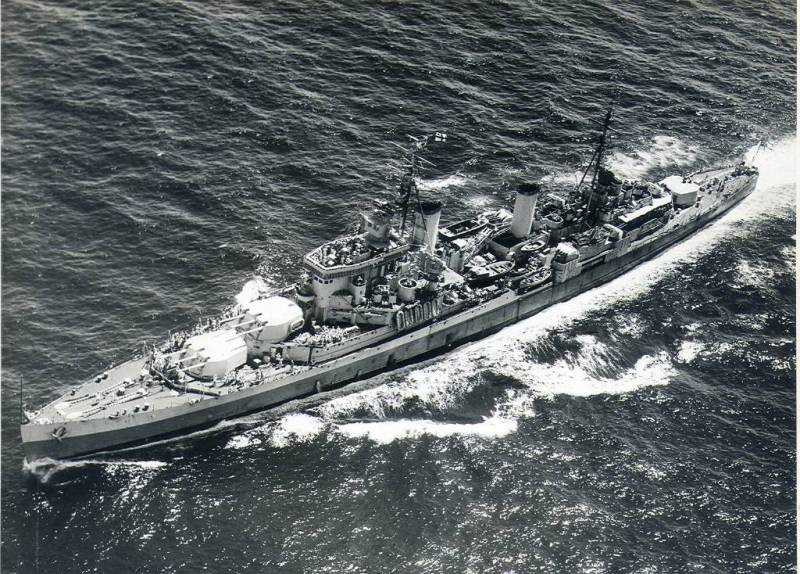 The ship's crew consisted of 865-960 people. Accommodation conditions were identical to the Fiji-class cruisers, that is, they were considered not very good due to the tightness of the premises. True, a new electrical forced ventilation system was installed on the Minotaurs, but in practice this did not greatly improve the habitability of cruisers, since the increase in anti-aircraft weapons entailed an increase in crew members. Not very large, about 40 people, but nevertheless, it was not easy for them to live on ships.

The main caliber consisted of nine 152 mm BL Mk XXIII guns in three three-gun turrets. Two towers were in the bow and one in the stern. 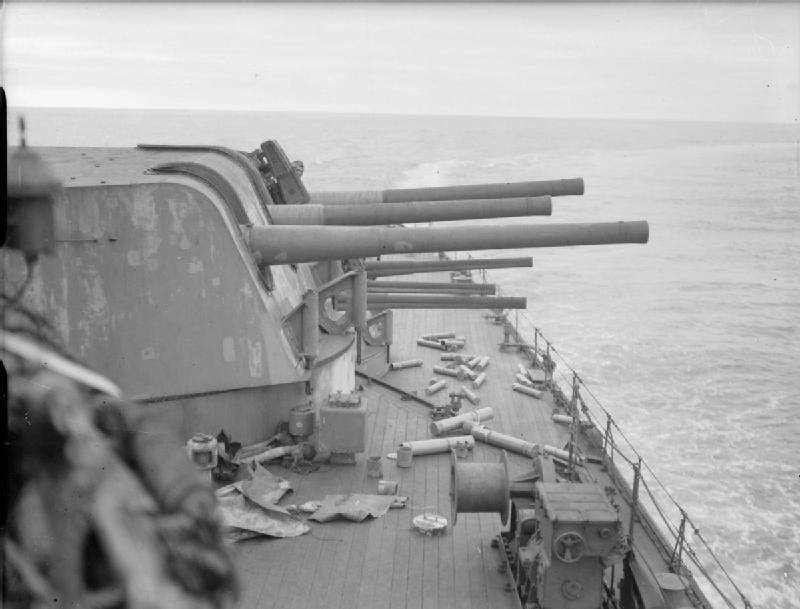 The BL Mk XXIII gun had a resource of 1100 rounds and a rate of fire of 8 rounds per minute. The projectile flew out of the barrel with an initial speed of 841 m / s and flew to a range of 23,3 km.

Auxiliary / anti-aircraft artillery consisted of ten QF Mk XVI 102-mm guns, housed in five twin-gun turrets. Four towers were located in pairs on the sides, and the fifth was behind the third turret of the main caliber. 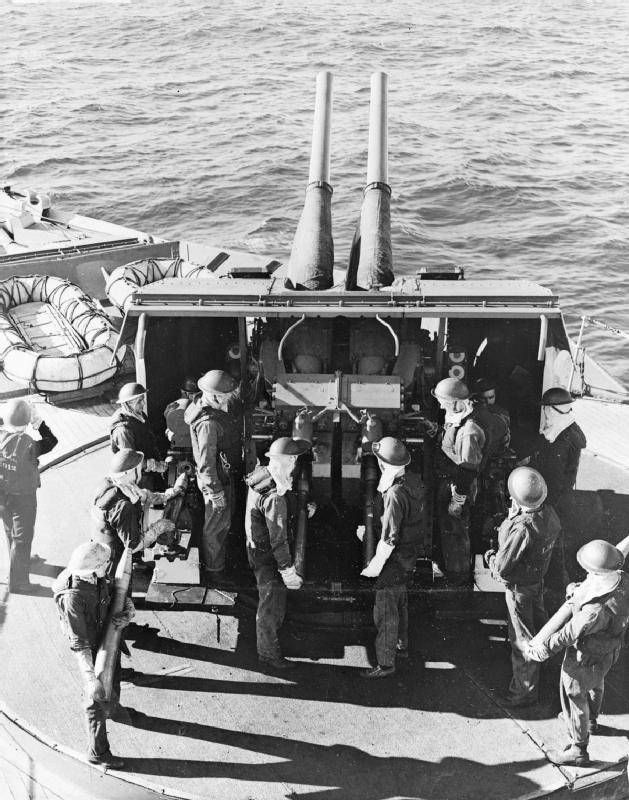 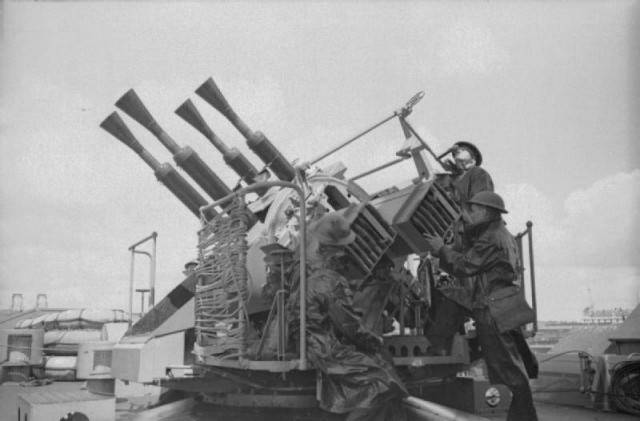 On the "Minotaur" / "Ontario" were installed eight single-barreled 40-mm anti-aircraft guns from the same "Vickers".

In addition to the "Pom-poms", the cruisers had eight twin and six single-barreled 20-mm installations of the "Oerlikon" company.

A total of 16 (24) 40-mm barrels and 22 20-mm barrels. This significantly exceeded the composition of the air defense of the Fiji-class cruisers.

The ships' radar armament was quite impressive. The scientific and technological progress of Great Britain affected.

Radar "Type 277" is often called the best British radar of the Second World War. An antenna with a parabolic array stabilized in two planes provided both the search for surface and air targets, and the determination of the height of air targets. The station detected the aircraft at a range of up to 30 miles at an altitude of 1500 meters.

To determine the range for artillery fire, the Type 293 radar was used. The radar confidently detected a battleship at a range of 17 miles, a destroyer at 12 miles, a submarine at 4 miles, and an aircraft at an altitude of 3 meters at a distance of 000 miles. 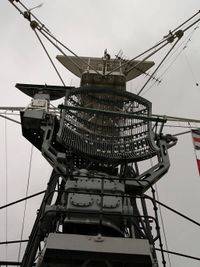 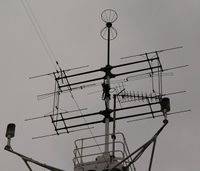 In 1945, Swiftshur underwent only one modernization. Were removed all 20-mm "Erlikons" and replaced them with 13 single-barreled anti-aircraft guns "Bofors" with a caliber of 40 mm.

"Ontario" was modernized after the end of the war, in the 50s, significantly reducing the number of anti-aircraft guns.

In general, the ships turned out to be controversial. Yes, in comparison with the "Fiji", seaworthiness was significantly improved, but the "colonists" did not seem to have any special problems with it, cruisers of this type were dragged all over the world, from the Arctic to Australia, and fought quite decently.

Having made such changes, the British shipbuilders, whatever one may say, weakened the power of the main caliber artillery by a quarter. This is a major change, since the cruiser must deal damage with the main battery fire in the first place.

The aviation was removed, which, we admit, by that time had lost all relevance and having increased the number of air defense barrels, it did not work to make a specialized air defense cruiser. Ten 102-mm barrels are very worthy, but only six could be fired aboard at the same time. And the main number of anti-aircraft guns were small-caliber automatic artillery, which is good only at close range. This is especially typical for "Pom-poms", "Oerlikons" fired further, but at long distances a 20-mm light projectile gave a decent spread and it was simply unrealistic to create a decent density of fire.

However, this artillery was more than enough to fight off the planes himself. 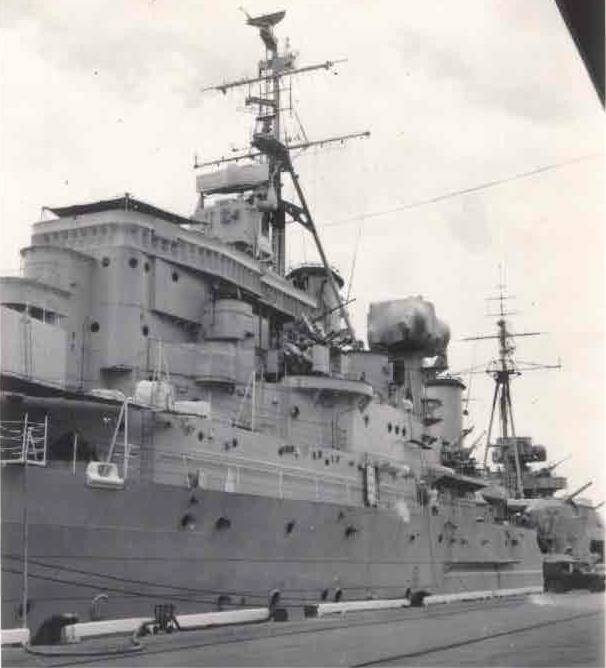 Probably, "Minotaurs" could be attributed to cruisers-scouts. These ships could conduct reconnaissance and airspace control just fine. The radars installed on the ships made it possible, moreover, they overlapped each other's work and two observation posts definitely gave less flaw in their work. 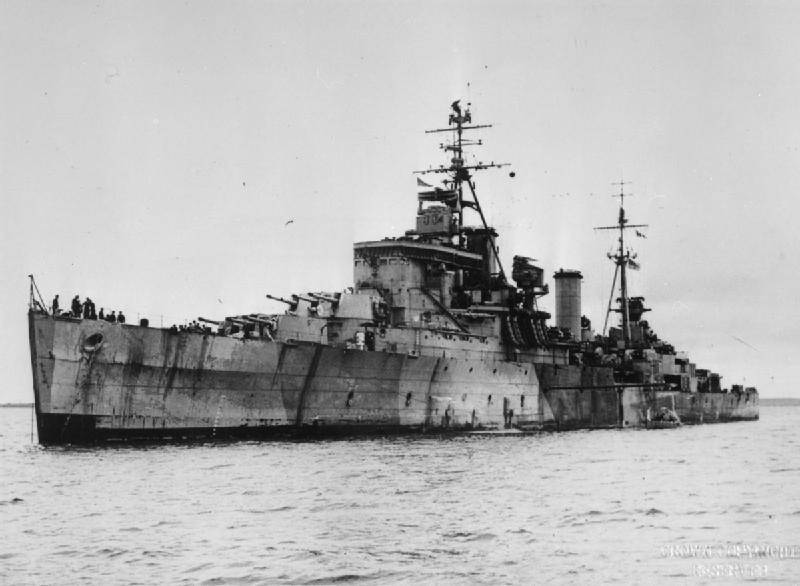 He entered service at the end of the war, when everything was more or less clear and understandable. Therefore, the cruiser was prepared for hostilities slowly. Having entered service in July 1944, only by December did the Swiftshur arrive in Sydney, where the ships of the Pacific Ocean fleet Great Britain. Sailing from the metropolis through the Suez Canal through Ceylon to Sydney can be counted as a preparatory process for the crew.

January-March 1945 took place in military coordination exercises with ships of the US Fifth Fleet.

In March, "Swiftshur" was assigned to task force G57, whose base was on Manus Island (Admiralty Islands) and as part of the group took part in operations against Japanese troops on Sakishima Island. The main task of the cruiser was to provide air defense to allied aircraft carriers, whose aircraft attacked Japanese coastal targets. 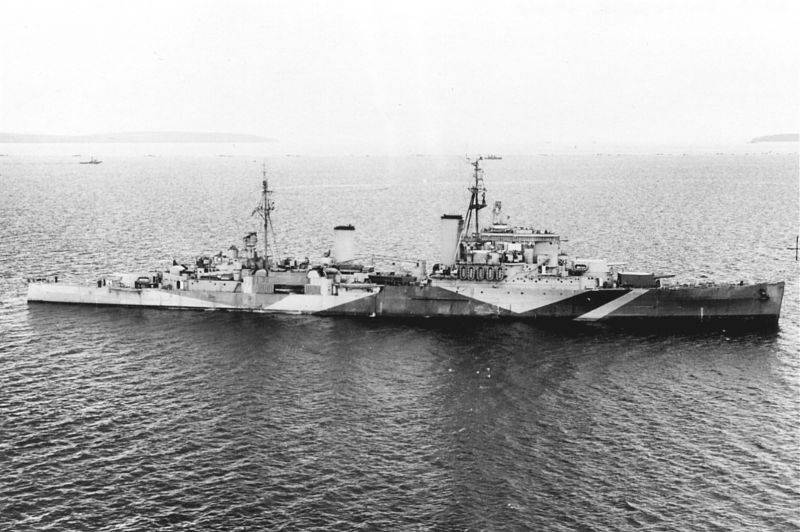 At the end of the operation on Sakishima, the cruiser was sent as part of a group to the island of Formosa (present-day Taiwan), which was 200 miles west of Sakishima and where heavy fighting with the Japanese was also unfolding.

On April 1, the cruiser was attacked by kamikaze for the first time, but no damage was done. Until the end of the month, the Swiftshur was covered by British aircraft carriers operating in Formosa.

In early May, together with the cruisers Euryal and the Black Prince, he was sent on a separate mission to fire at targets on the islands of Formosa and Miyako. The cruisers for three days inflicted artillery strikes on objects on the islands, but were driven off by constant kamikaze attacks.

The kamikaze attacks began to worry the group command so much that on May 10, the Swiftshur was separated, along with the destroyer Kempenfelt, into a separate air surveillance group. That is, the cruiser controlled the airspace with her radars, and the destroyer covered the Swiftshur from possible attacks by Japanese submarines.

Together with the aircraft carriers of the Swiftshur group, he took part in the final battles for Okinawa.

In June 1945 he took part in a massive artillery attack on Truk Island. Then he was assigned to cover the aircraft carrier "Implacable", under which he again performed the role of a radar patrol.

June 15, together with the destroyer "Teaser" fired at the Japanese positions on the island of Moen. After a short repair, on August 15, the cruiser ended up in Hong Kong and took part in the operation for the second occupation of the island as part of the task force TG111. 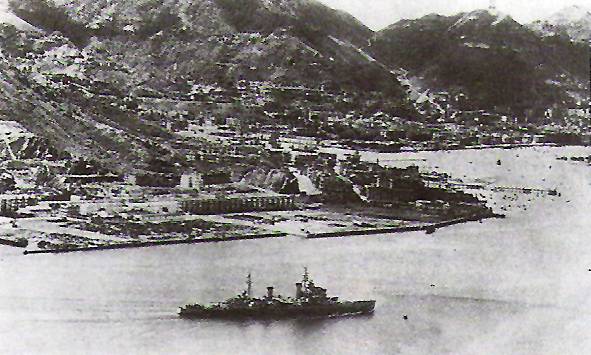 Took part in repelling multiple kamikaze attacks, guarding the aircraft carrier "Vengeance". Until the very end of the war, the cruiser was based in Hong Kong, where she met the surrender of Japan.

At the end of the war, the ship was returned to the metropolis. There he continued to serve as the flagship of the 2nd Cruising Squadron and took part in the coronation events of Queen Elizabeth II. 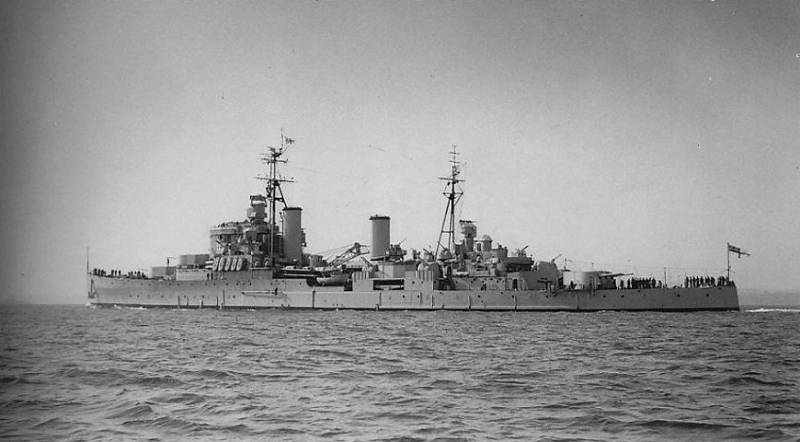 In 1959, the modernization of the cruiser to the level of the "Tiger" class began. However, in the process, the complete unprofitability of further modernization became clear, and it was decided to write off and scrapped the cruiser, which happened in 1962. 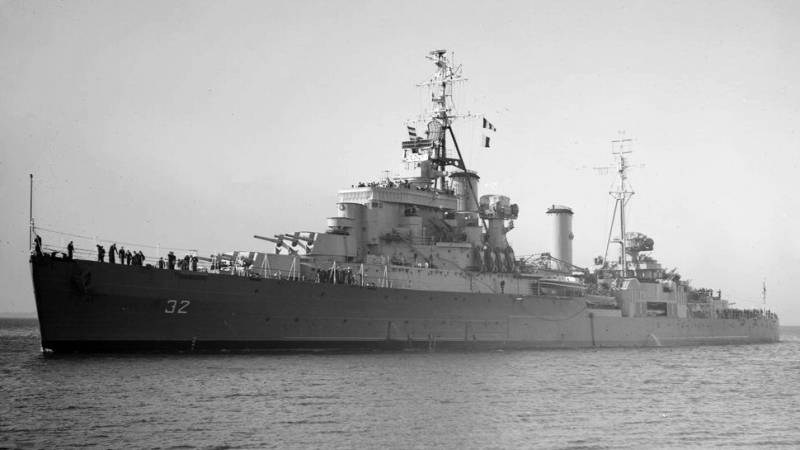 This ship did not have time to take part in the hostilities. It is difficult to say what was the reason, whether the Canadian authorities were in no hurry to expose the new ship to kamikaze strikes, or there was simply no such urgent need for ships (although the Swiftshur plowed quite seriously), but Ontario at least and became part of the 4th Pacific Squadron of the Royal Navy, but was engaged there in completely incomprehensible matters.

It is noted in the ship's annals as "used in various operations in Hong Kong, Manila and Japan." On November 27, 1945, he arrived at his place of permanent deployment in Canada. 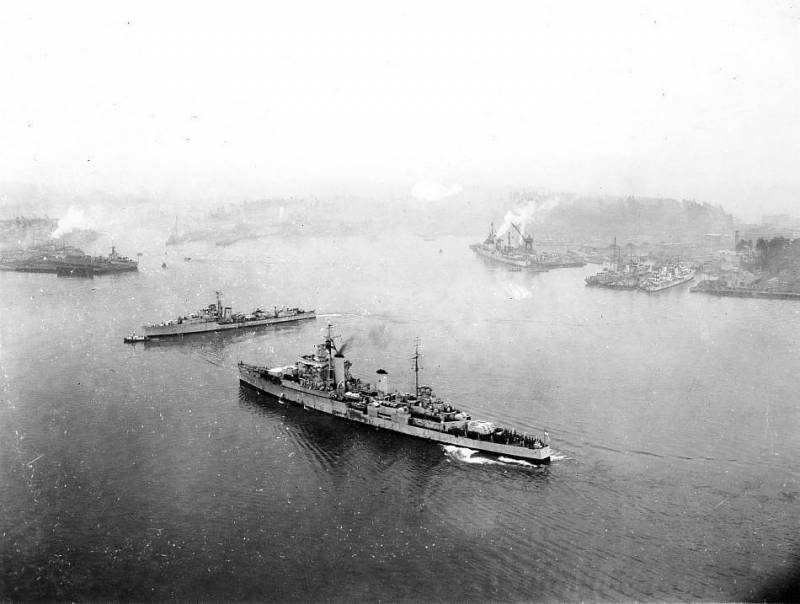 Since 1948, the ship more than actively participated in various exercises and maneuvers, ashamed of the ships of the US and British navies. In fact, "Ontario" has become a training and representative ship. As a training, he made transitions to two round the world, as a representative in 1951, he drove Princess Elizabeth and Prince Philip, Duke of Edinburgh from Sydney (which is in Nova Scotia, Canada), through the Cabot Strait to Newfowland.

Could have won by sinking the merchant ship Arauco by colliding with it. Luckily, everyone survived, but the cruiser spent two weeks undergoing repairs in Rio de Janeiro, and then at a quiet pace across half the world reached Canada, where the ship was normally repaired.

Participant of the coronation events of Queen Elizabeth II. 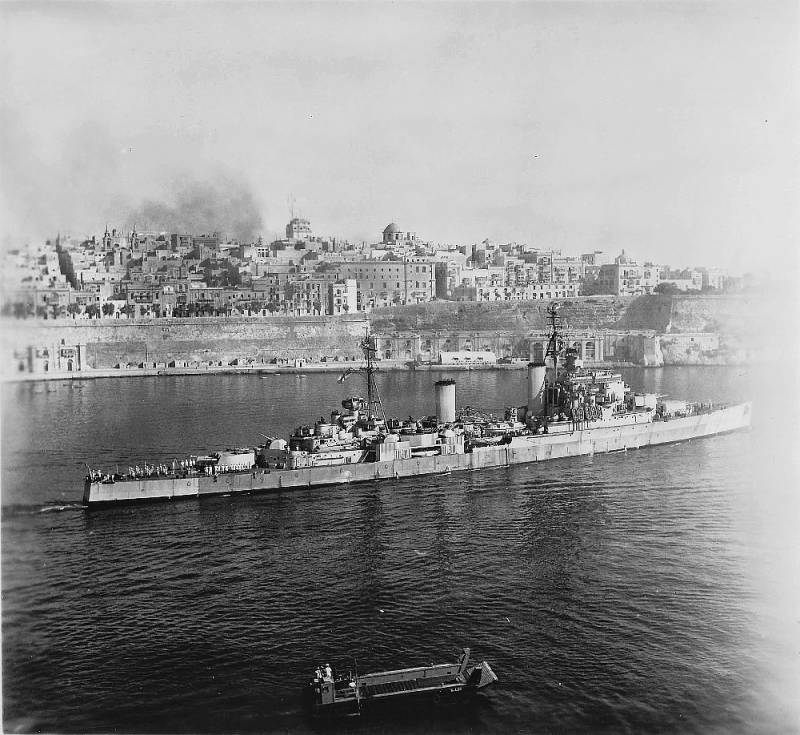 In general, the project of reworking the "colonists" was not exactly successful. Despite the removed main battery tower, hangar, catapult and aircraft, the installed rather bulky radar equipment overloaded the ships. The total displacement of the cruisers reached almost 12 tons.

However, there was something about these ships that makes them full-fledged participants in our reviews, despite the fact that Ontario did not fight.

"Swiftshur" has shown in practice, having occupied a rather peculiar niche, that a cruiser can be not only an artillery platform, but also a ship that searches for targets and designates targets.

Basically, cruiser scouts did exactly the same thing in World War I. But Swiftshur took this to a new level, as its radar equipment turned out to be no less (and maybe even more) useful than the 152-mm guns.

So the best term that could be applied to "Minotaurs" is "useful." Indeed, as a radar patrol cruiser, the cruisers proved to be quite useful.