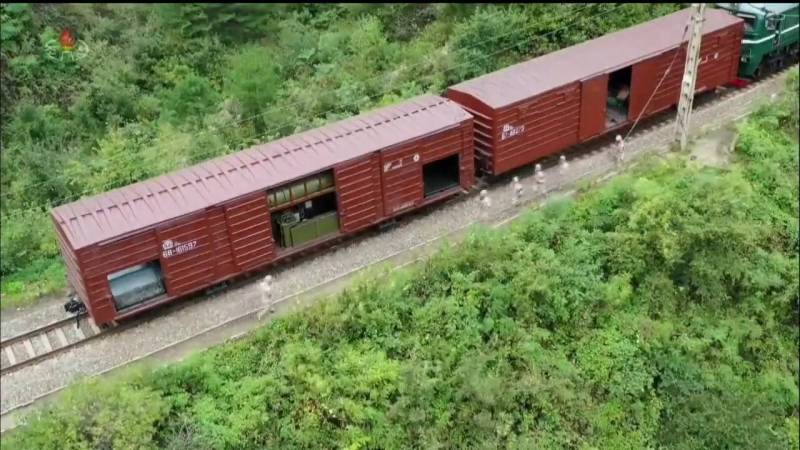 BZHRK in position, the calculation takes its place

The DPRK is actively developing new missile weapons of all major classes designed to provide strategic deterrence. A new step in this direction was the creation of the first own combat railway missile system (BZHRK). Tests of this product with a combat training missile launch began a few days ago.

In recent days, the army and industry of North Korea have conducted several tests of various missile weapons... So, on September 11-12, there were successful tests of a promising mobile complex with a cruise missile. In an official statement, this product was called a strategic weapon of particular importance for the country's defense.

On September 15, the Ministry of Defense of South Korea announced that the DPRK was carrying out two new missile launches. It was found that ballistic missiles were launched from the central interior regions of the DPRK. Having overcome a route several hundred kilometers long, the missiles fell into the Sea of ​​Japan. The Japanese Self-Defense Forces confirmed this information, and also noted that North Korean missiles sank outside the territorial waters and the exclusive economic zone. As always, the country's officials condemned the DPRK. 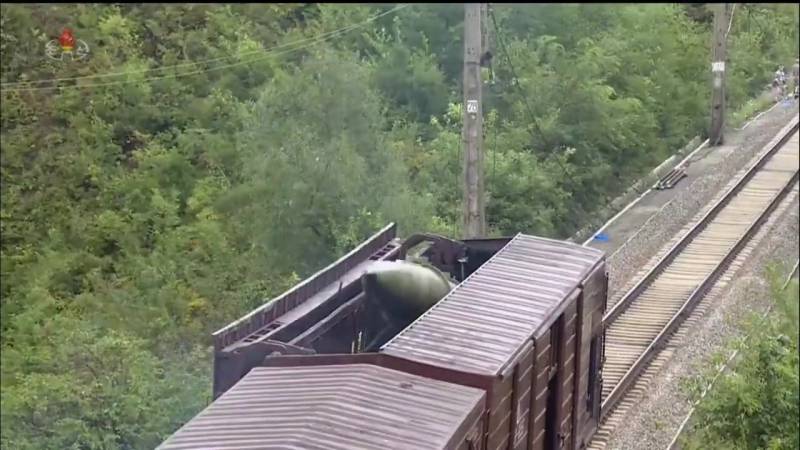 Rocket lift
Soon, the Korean Central Telegraph Agency released official information about the tests. In addition, photographs and video footage of the BZHRK in position, preparation for launching and launching missiles were published.

According to the TsTAK, on ​​the morning of September 15, a railway missile regiment equipped with a new type of complexes was ordered to go into the mountainous terrain and deliver a training strike at a conditional target at a distance of 800 km. The calculation of the complex promptly reached a given firing position, deployed, and then launched two missiles. The tests were completed with the successful defeat of the intended target.

TsTAK reports that the BZHRK is being used for the first time, and the purpose of the tests was to practice combat use, assess combat readiness and determine the overall potential. The complex was created with the aim of "increasing the ability to deliver intensive simultaneous strikes" against enemy targets. 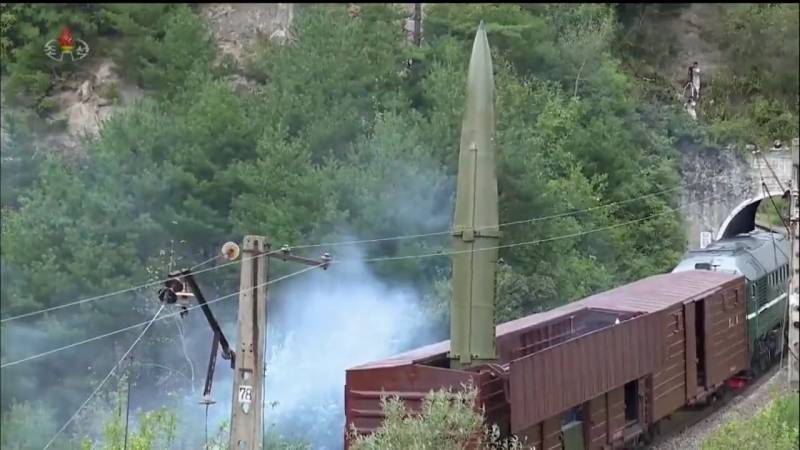 The published photo and video materials show the general appearance of the new North Korean BZHRK, although they do not reveal all of its features. At the same time, there is every reason to believe that an incomplete complex was involved in the demonstration tests, which did not fully meet the requirements of real duty.

BZHRK for test launches has a limited set of tools. It consisted of an M62 diesel locomotive and two carriages with special equipment. The first is probably intended for the transportation of the calculation and various technical means. The second contains launchers and other systems. Both special wagons are disguised as ordinary covered freight cars. Thus, the means of the missile complex outwardly almost do not differ from the usual rolling stock of the railways.

The launcher car uses standard biaxial bogies. At the same time, under the sides there are two pairs of jacks for support on the embankment and leveling. The car body features an openable roof of two halves; the flaps open separately. In addition, in the front and rear parts of the car, additional side hatches are provided for the discharge of reactive gases. 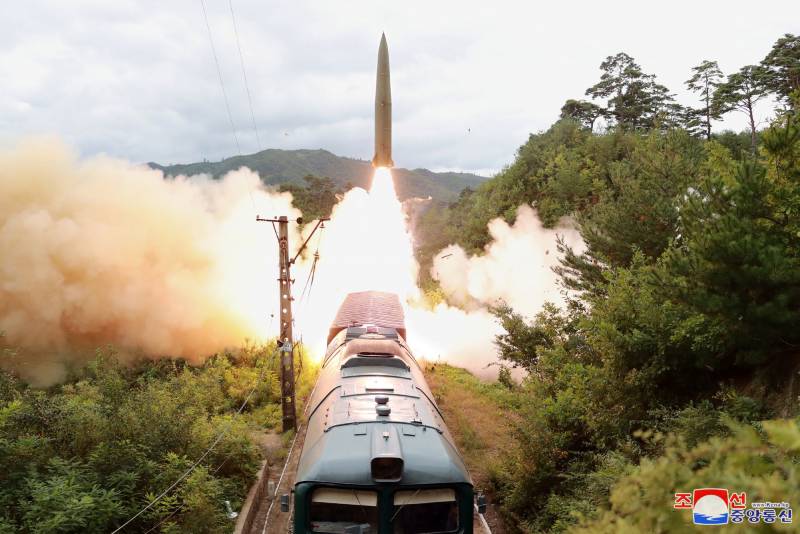 In the center of the car, behind the regular doorway, a certain protective-colored casing is noticeable, the filling of which is unclear. Also inside the car there are two lifting launch rails for missiles. The left (in the direction of travel) installation is in the front of the car, the right one - in the back. Thus, in the transport position, two missiles lie side by side and "towards" each other.

BZHRK missiles have a characteristic appearance formed by cylindrical and conical aggregates. The tail has rudders or stabilizers. Apparently, this missile was borrowed from a previously presented short-range complex known as the KN-23.

According to foreign data, the KN-23 rocket is a single-stage and is equipped with a solid-propellant engine. Product approx. 7,5 m and a mass of 3,4 tons, it carries a load of up to 500 kg. The launch range was previously estimated at 670-690 km. It follows from the latest reports of the TsTAK that this parameter reaches 800 km. 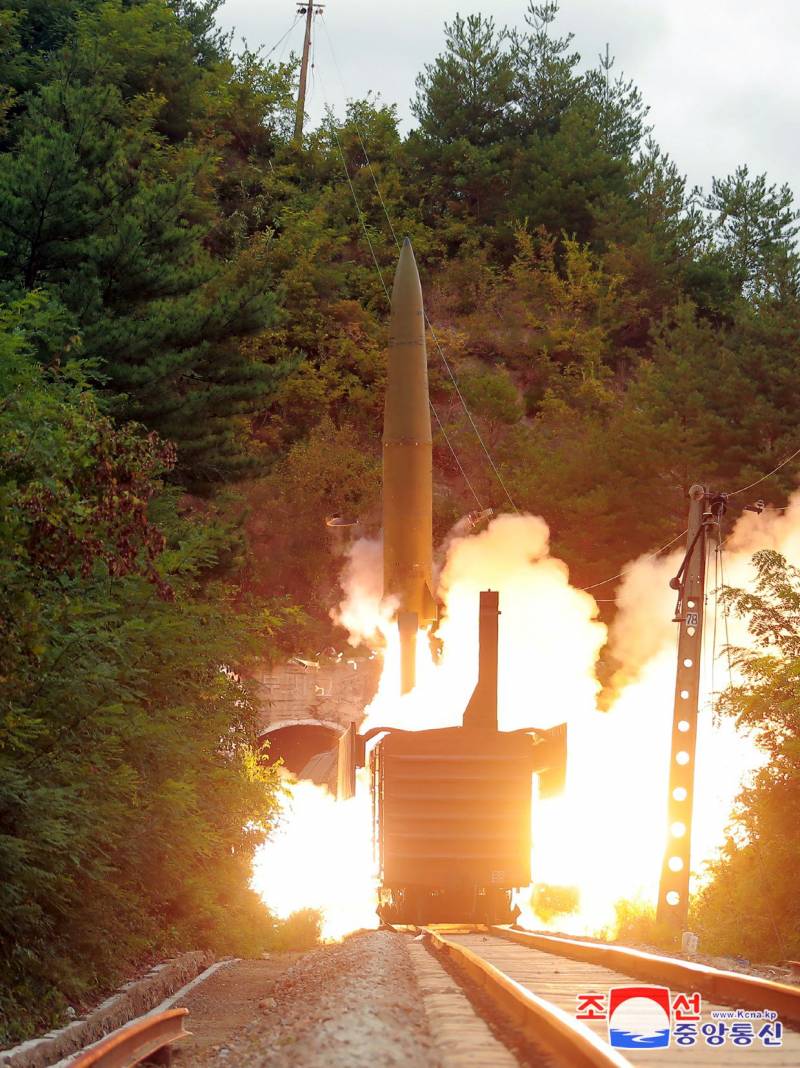 Official video footage shows a train of a locomotive and two carriages leaving the tunnel and stopping at a firing position. Then the missile men in protective suits leave their carriage and carry out the necessary manipulations. At the same time, one of the roof flaps was opened and the first rocket was raised. The launch is carried out in a "hot" way, for which hatches are opened in the sides of the car. After the launch of the first rocket, the complex prepared and launched the second.

So far, we are talking only about the first tests of the new BZHRK, but in the foreseeable future the project may reach mass production and the launch of a full-fledged combat alert. As a result, another modern missile system will appear in service with the Korean People's Army, and it will have a number of characteristic differences and advantages over other products.

The main advantages of the BZHRK are mobility and stealth. At the disposal of trains with missiles is approx. 6400 km of railways for constant movement and a large number of tunnels suitable for use as shelters. It will be extremely difficult to detect and track the complex on duty, and for this the probable enemy will have to attract all available reconnaissance means. 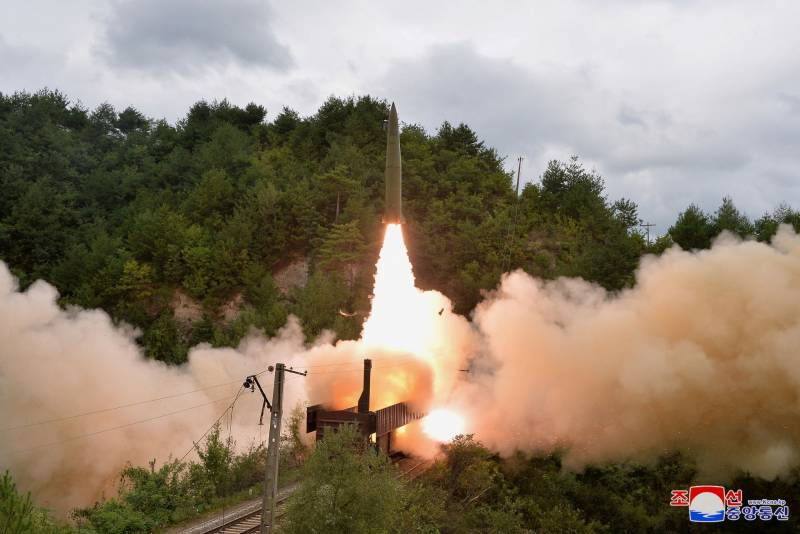 However, there are some drawbacks. Apparently, the Korean BZHRK does not have an overhead drainage system, which can lead to restrictions on the choice of launch sites. In addition, it is seen that the tracks must be equipped to use the jacks of the launcher. It is unlikely that the DPRK will prepare all its roads in this way. Preparation for launch after arriving at a position takes some time, on which efficiency and survivability may depend. However, the duration of such training is unknown, which does not allow drawing conclusions.

With the help of the KN-23 ballistic missile, the Korean BZHRK can attack strategically important objects of a potential enemy, and the launch is possible both from the border and from inland regions of the country. At the same time, such an ammunition does not allow solving all the urgent tasks of engaging distant targets of a potential enemy.

The complexity and cost of production of the complex are of great importance. The volumes of future production and, accordingly, the possible number of BZHRKs on duty and in reserve depend on them. A project with high potential could receive a corresponding priority - and all the necessary resources will be allocated for it. 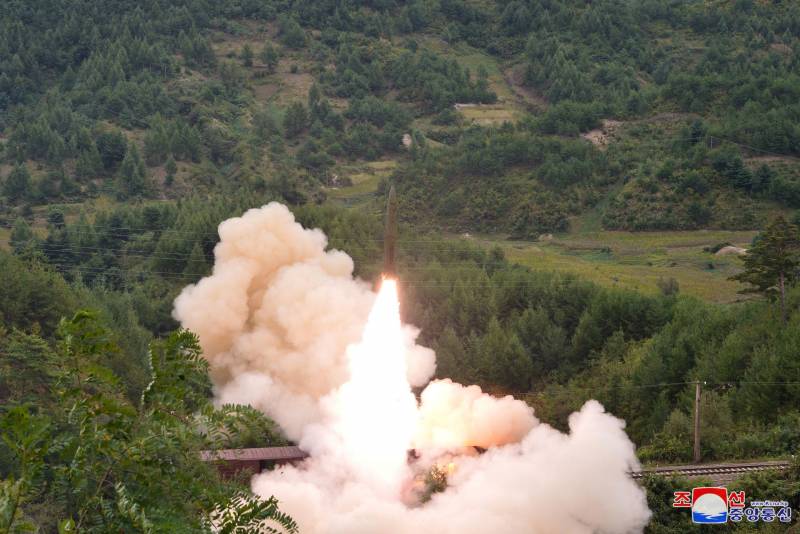 Departure of the rocket from the launcher. You can consider the jacks of the car and the preparation of the tracks.

The DPRK presented its new BZHRK to the public. This suggests that his fate has already been decided. After all the necessary tests have been carried out, the complex will be put into service, put into series and will start constant watch and patrol. As a result, in the short term, a new important component will appear in the North Korean system of strategic deterrence.

It is curious that with its new project, the DPRK is included in a narrow circle of countries-developers of the BZHRK. She becomes only the fourth creator of such technology, and can also count on the second or third place among the countries that have adopted it - after the USSR and, possibly, China. At the same time, for some time, the DPRK may remain the only operator of the BZHRK in the world.

However, such "honorary titles" are only a pleasant addition to the main results of the project. The latter consists in adopting a fundamentally new model capable of strengthening the system of strategic deterrence. Probably, all this will again lead to criticism from abroad, but the DPRK values ​​its security higher than the opinion of third countries - and therefore will continue to develop missile weapons of all classes.