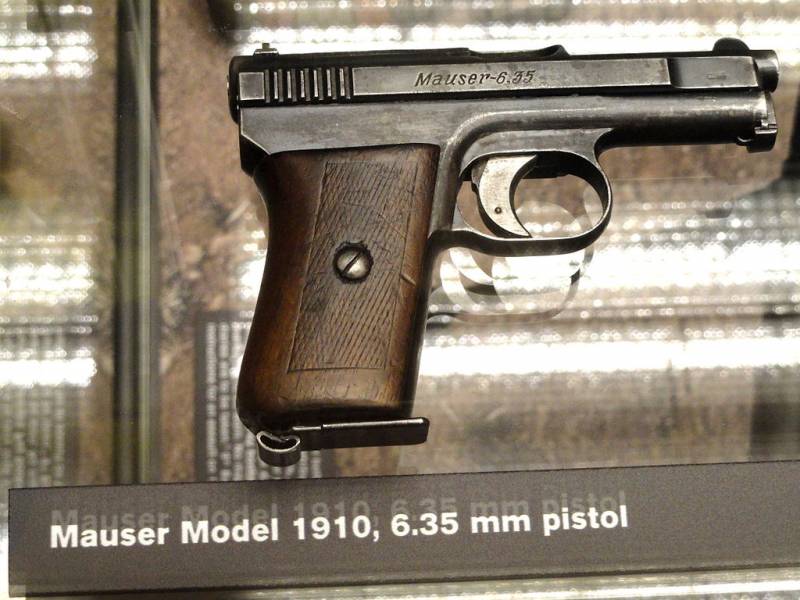 [right] "They were tall people in boots with spurs, in huge breeches and with Mauser in polished wooden boxes"
"Twelve Chairs", Ilya Ilf and Evgeny Petrov [/ right]
History firearms weapons. And it so happened that the Mauser company, like any other, was looking for new niches in order to fill them with their products and profit from the sale of their pistols. C96 was a good product, but expensive, not everyone could afford it, and it was impossible to put it in your pocket. 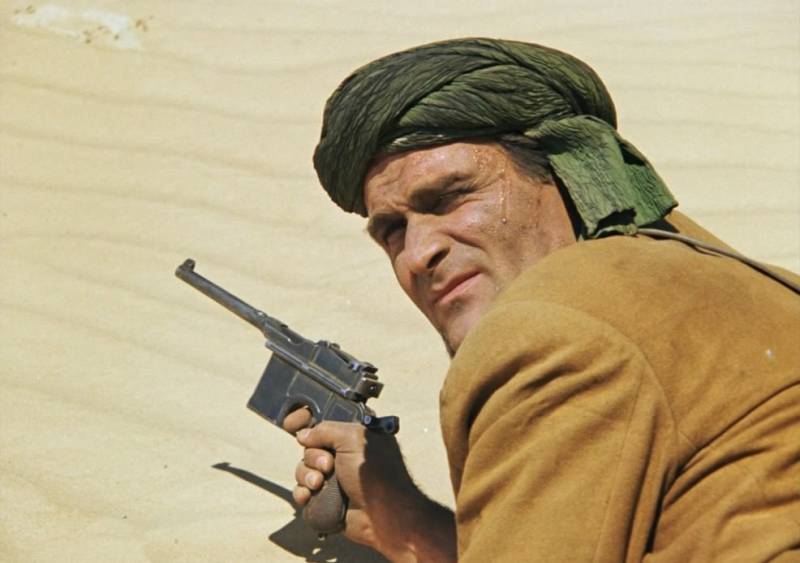 You can't put such a pistol in your pocket, of course! A polished drawer is indispensable! Shot from the movie "White Sun of the Desert"
Therefore, on reflection, the company's management authorized the development of a new, now pocket pistol. So another Mauser pistol was born, which was not Winston Churchill's favorite, which was not associated with major political upheavals, but which was a kind of quiet achievement of this company, and which was sold in the amount of about half a million copies of all variants. Initially, this pistol was conceived around 1908-1909, but its production models appeared in 1910 and 1914.

Paul Mauser saw the design of his new semi-automatic pistol in such a way that it could be easily adjusted for cartridges of different calibers. It is believed that the design of the new pistol was developed by an engineer named Joseph Nickl, whom Mauser hired in 1904. Nickl made a pistol chambered for 9 × 19 mm Parabellum, 11,43 × 23 mm, 7,65 × 17 mm and 6,35 × 15 mm Browning. For calibers 11,43 and 9-mm, he used a system with a semi-free breech, and his designs for cartridges of smaller calibers had a free breech.

It was assumed that both semi-free breech pistols would become military weapons, but this did not happen: the German military adopted the P08 Luger pistol, and the American military adopted John M. Browning's M1911 Colt. Even the British, who considered the automatic pistol "hopeless unsportsmanlike", made their own Webley Mk I pistol, designed by William Whiting (adopted by the Royal Horse Artillery in 1913 and the Royal fleet 1914), but Nickl's Mausers were not paid attention to. So the original idea of ​​creating one basic pistol design suitable for all potential buyers was not implemented in this case. 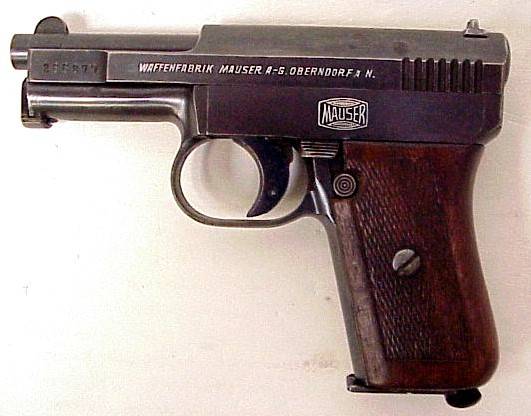 Mauser "Model 1910" caliber 6,35 mm. The side latch of the removable plate, the safety release button and the "hump" of the bolt, which has become a characteristic feature of all pistols of this series, are clearly visible. (Photo courtesy of Alain Daubresse, website www.littlegun.be)
But thanks to all these developments, the M1910 pistol was born, designed for the relatively weak, but common cartridge of 6,35 mm Browning. The pistol got a free breechblock. It was made simple, reliable and easy to maintain. As a result, from 1910 to 1913, about 60 copies of such pistols were produced. In 000, a new model of this M1914 / 1910 pistol appeared under the same cartridge, and then the M14 model was already chambered for the 1914 mm Browning cartridge. These pistols have become a standard weapon not only in Germany, but also in a number of other countries. In total, about 7,65 copies of the pistol were made for the 330-mm cartridge and about 000 (!) For the 6,35-mm cartridge. In 500-000, a small modernization of the models of the 7,65s was carried out, after which their handle acquired a more rounded shape, and the heel of the store was freed from sharp corners. New samples began to be designated as M1934 / 1936 (1914 mm) and M1910 / 34 (6,35 mm). True, fewer of these new models were produced: the 1914-mm caliber - about 34, and the 7,65-mm caliber - about 6,35. Nevertheless, in general, these were excellent indicators of the level of production and demand, that is, of all that , which brought this firm a solid income. 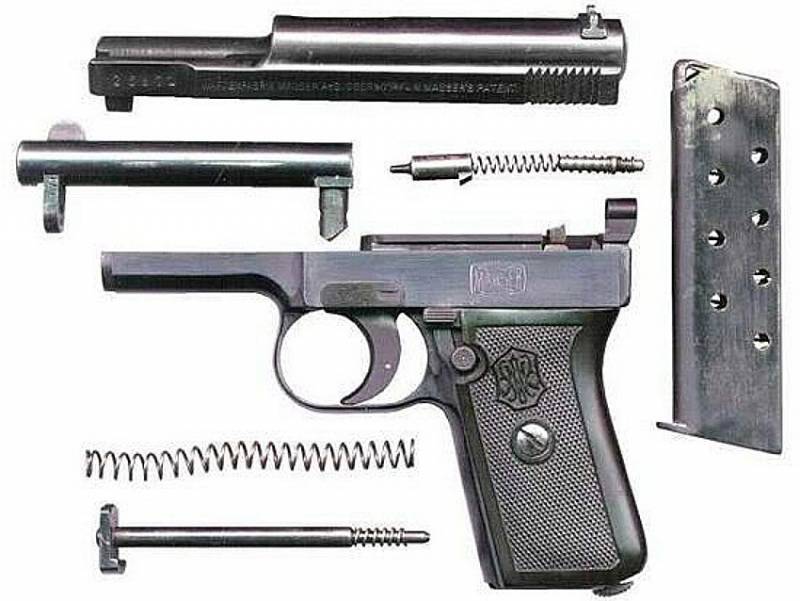 Mauser 6,35mm "Model 1910" disassembled. The pistol consisted of a minimum of parts and was made so that it could be easily disassembled 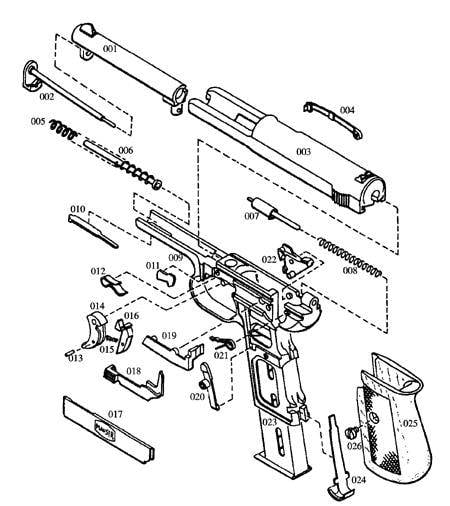 Diagram of the device pistol M1910
As you can see from the picture above, the stationary barrel on it was easily removed, as it was held in place by a long rod, which was also the guide rod of the return spring.

The design of the M1910 pistol, as well as all subsequent pistols created on its basis, was simple, but original in its own way. The shutter is free, but although the barrel was motionless, it could be easily removed. To do this, it was enough to remove the long rod located under the barrel, and it was at the same time the guiding rod of the return spring. Also, the first version of the 1910 model had a side latch just above the trigger, which allowed the side plate (it had the Mauser lettering on it) to be removed to lubricate and clean the trigger. The second option was the "New Model", commonly referred to as the "Model 1910/14" as it first appeared in 1914, with a number of improvements to make it easier to use and maintain. The mechanism itself for the M1910 6,35 mm and M1914 7,65 mm pistols was almost the same. 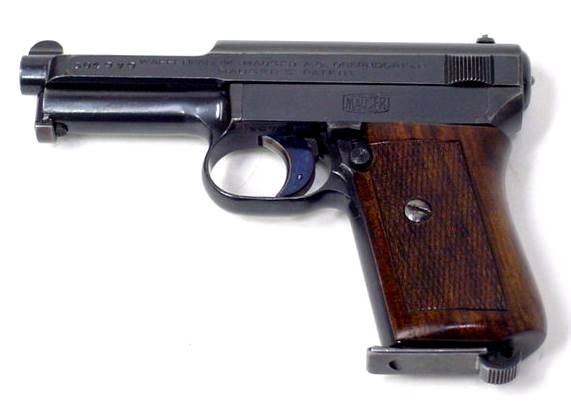 If the magazine is loaded with cartridges, then when it is inserted into the pistol all the way, the bolt goes forward, sending the cartridge into the chamber. This was a very handy feature, providing the fastest reloading possible, as there was no need to engage the bolt to activate the pistol. As soon as the loaded magazine was inserted, the bolt closed automatically and the pistol was ready to fire. Accordingly, after the magazine was shot, the bolt remained in the extreme rear position, that is, the pistol had a “bolt stop” function, which suggests that its mechanism was very well thought out. The stores were for nine 6,35-mm rounds and eight for 7,65-mm. The weight of an empty pistol chambered for 6,35 mm cartridges is 445 g. 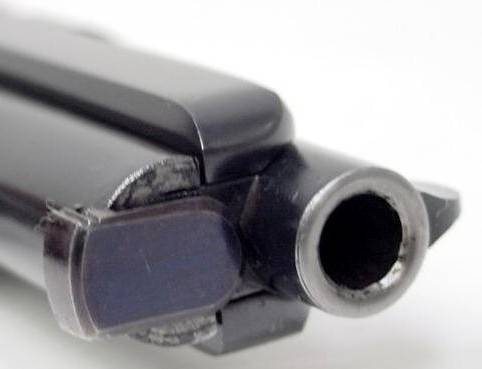 М1914 caliber 7,65-mm - barrel attachment rod shank. (Photo courtesy of Alain Daubresse, website www.littlegun.be)
The fuse was a small lever behind the trigger, which you had to press a little to turn on the fuse. When turned on, the fuse was locked tightly. But to unlock it, you had to press the button under the safety lever, which released the fuse. Without knowing all these features, it was simply impossible to shoot from this pistol! 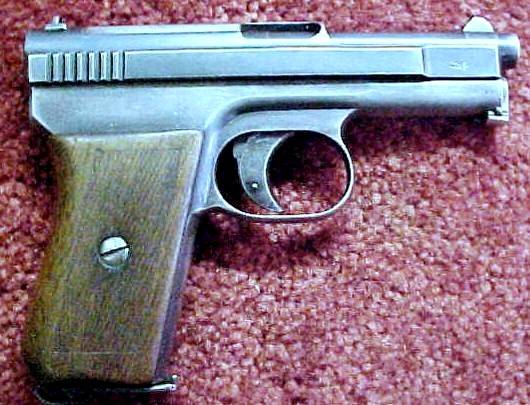 The last major design change for the M1914 was the 1934, which, like the 6,35mm version, received a differently shaped pistol grip. (Photo courtesy of Alain Daubresse, website www.littlegun.be)
It is believed that all Mausers of this model had the same drawbacks. So, the magazine latch was located on the handle at the bottom, but this was typical for all pistols of those years. In addition, the parts of the trigger were very small and could be easily lost during disassembly. A weak spring misfired in severe frost.

The Mauser WTP (Westen Taschen Pistole - "vest pistol") became even smaller in size, the serial production of which by the Mauser company began in 1921. Originally called "Mauser" TP (Taschen Pistole - "pocket pistol"), but after the release of the first batch of 500 pieces, to emphasize its miniature size, the pistol was renamed WTP.

The WTP was another pistol with a high breech casing and a striker type mechanism. Before disassembling it, it was necessary to separate the plastic cheeks of its handle, made as one piece. The pistol fired with 6,35 mm cartridges, magazine capacity - 6 rounds. The drummer's shank protruded from the rear of the frame and thus served as an indicator of the presence of a cartridge in the chamber. In total, from 1921 to 1940, 50 of these pistols of two modifications were produced, and after the war, several thousand more of these pistols were collected from captured components by the French, albeit with different cheeks. 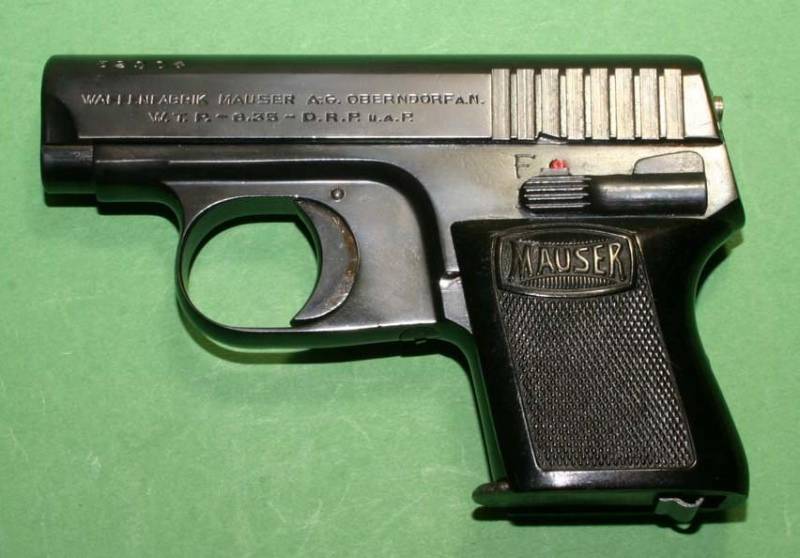 Vest Mauser WTP (Photo courtesy of Alain Daubresse, website www.littlegun.be)
Automatic Mauser pistols were thoughtfully designed and proved to be a very popular civilian weapon in the 20-30s of the twentieth century, and so much so that many of them were exported even to the United States, which clearly did not suffer from a shortage of pistols after the end of the First World War. They were distinguished by very high Mauser quality standards, so they were reliable, had decent shooting accuracy and provided a very high level of safety for their owners.