Ships of Antarctica: "God is with us, party organizer and" Kharkovchanka " 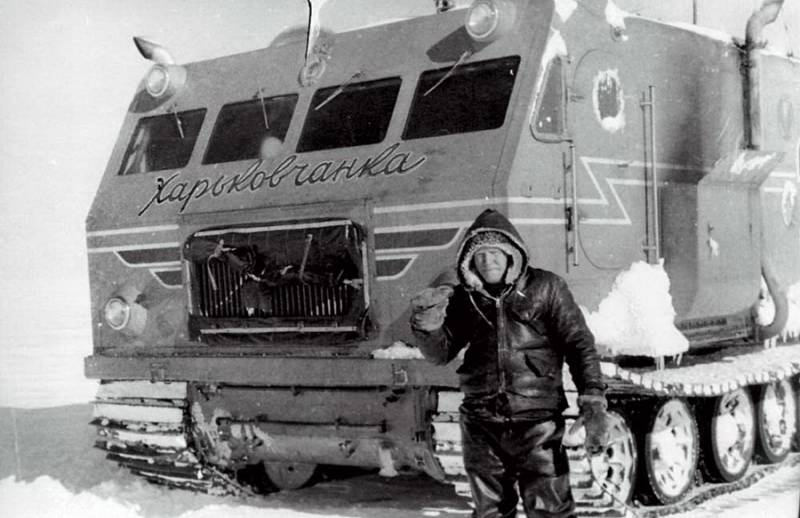 Caterpillars of the country of the Soviets

The first portion stories it was about the first attempts to storm Antarctica with self-propelled vehicles. The American attempt with the wheeled "Snow Cruiser" failed, but the Soviet post-war experience was quite successful. This is not surprising - by that time a whole engineering school for the creation of all-round equipment had developed in the country. Dense snow cover and muddy roads - it was with such difficult problems that domestic automotive designers had to fight.

However, initially this question was acutely faced by the Frenchman Adolphe Kegresse. The personal chauffeur of Nicholas II and the technical director of the Tsarskoye Selo Imperial Garage was the first in the country to attempt a radical solution to the off-road problem. In 1910, the Frenchman began to create a half-track propulsion device, which made it possible to move on a fairly thick layer of snow. The off-road capabilities of the Russo-Balts, Delaunay, Benzov and other imperial vehicles were vanishingly small.

Kegress made a radical decision, multiplying the contact area with the surface due to the tracks at the rear and skis on the front axle. The first car with a Kegress propeller was the French FL 18/24 CV, later in the imperial workshops up to nine cars were altered. Under Soviet rule, the ideas of the Frenchman lived for quite a long time - until the mid-30s, and the leader of the revolution, Lenin, enjoyed using the completely bourgeois Rolls-Rolls Silver Ghost with caterpillars with pleasure. Until now, a pair of "skis in front - behind the caterpillar" works well as a temporary measure to overcome the snow cover. Baumanians and Russian Mechanics presented the Arctic ATV RM-2021 with similar equipment at Army 500. 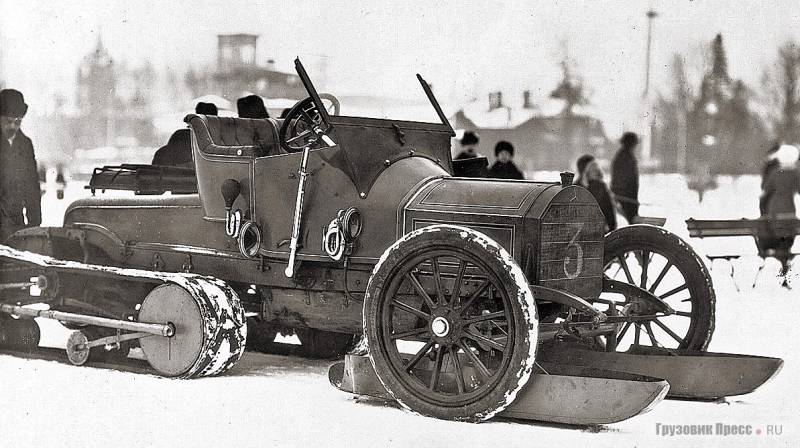 A way to overcome snowy deserts along Kegresse. Source: gruzovikpress.ru
The priority in civilian tracked vehicles, fixed back in tsarist Russia, was not fully implemented later - the country had completely different concerns and problems. When it came time to conquer snowy deserts in the extreme conditions of the Arctic and Antarctic, there was not much to choose from. Almost the only option was the AT-T heavy artillery tractor.

The prototype of the machine under the name AT-45 was developed back in 1943 based on the transmission and chassis. tank T-34. The V-2 diesel engine in a derated version of 350 hp was chosen as the power plant. with. Reducing power has become a necessary measure in the struggle for a longer engine resource. In those days, tank engines worked no more than 500-600 hours. The main task of the tractor was considered to be the transportation of howitzers of the Reserve of the Supreme Command, and, of course, a slightly larger resource was required. The pull on the hook of the AT-45 tractor was 15 tf, and the platform's carrying capacity reached 6 tons. Nothing sensible came out of this prototype - even by the end of the war, the T-34 "bogie" was outdated, the gearbox was not suitable for the needs of the tractor (low power range), and the tracks did not create the required "hook". The first batch of seven cars produced in Kharkov in 1944 was never expanded to a full series. 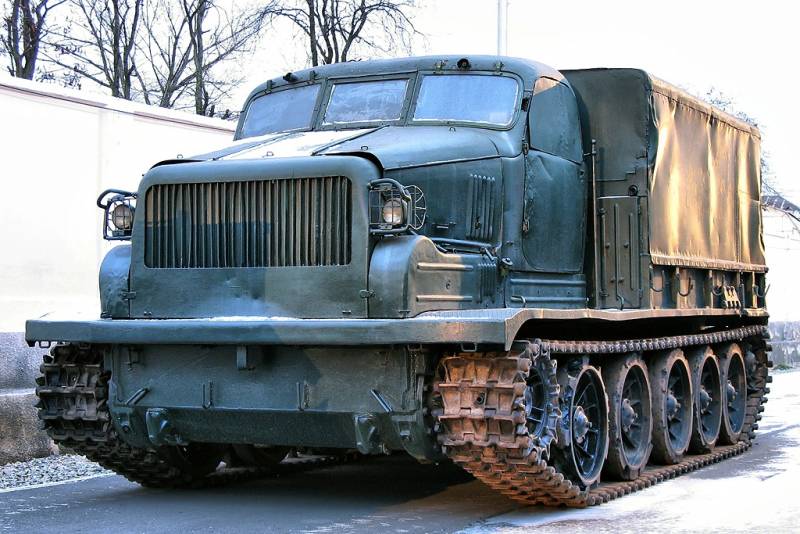 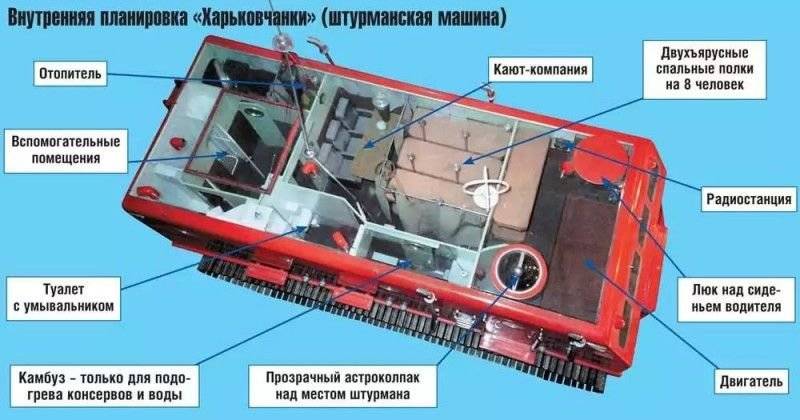 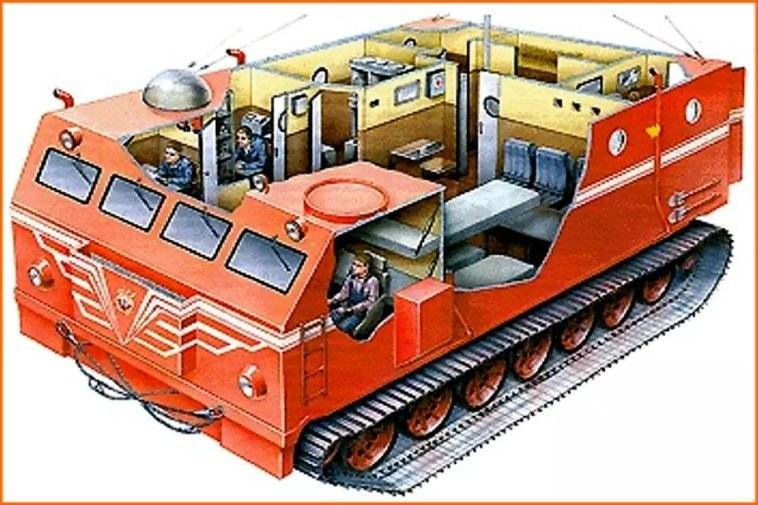 "Kharkovchanka". Source: foto-history.livejournal.com
In the post-war period, it was decided to develop a heavy tractor on the basis of the T-54 under the name "Product 401". It must be said that the car was developed in a very short time for the Soviet industry - in 1947, the first run of an experienced tractor from Kharkov to Moscow, and two years later, serial production. The manufacturer, as in the case of the predecessor of the AT-45, was the Kharkov transport engineering plant. The tractor received the name AT-T, a characteristic recognizable appearance with a cab from the ZiS-150 and turned out to be the only vehicle in its class. Therefore, the tracked vehicle was used not only for its intended purpose as an artillery tractor, but also as a missile carrier, an engineering vehicle, a base for a radar station and much more. The story about this legendary car, which has been in production for 30 years, requires a separate material, but for now let's move on to the Antarctic tractors based on it.

"Kharkovchanka" goes to the blizzard

Nobody really knew how to actually master the poles of the Earth - everything came with experience. Americans in 1935 tried to use wheeled vehicles on the principle of "I carry everything with me." But even the giant wheels of the Snow Cruiser did not allow the polar explorers to succeed. Soviet engineers decided to apply the classic scheme with a tractor, dragging sleds or tracked trailers along the snow. AT-T seemed to be suitable for this very well - the mass of the towed trailer reached 25 tons, the platform was loaded up to 5 tons, and the average specific pressure on the surface did not exceed 0,65 kg / cm2... By 1957, the Kharkovites prepared a version of the tractor, specially modernized for the conditions of Antarctica - AT-TA. The equipment passed through the intrafactory papers under three codes "Product 401A", "403A" and "403B". 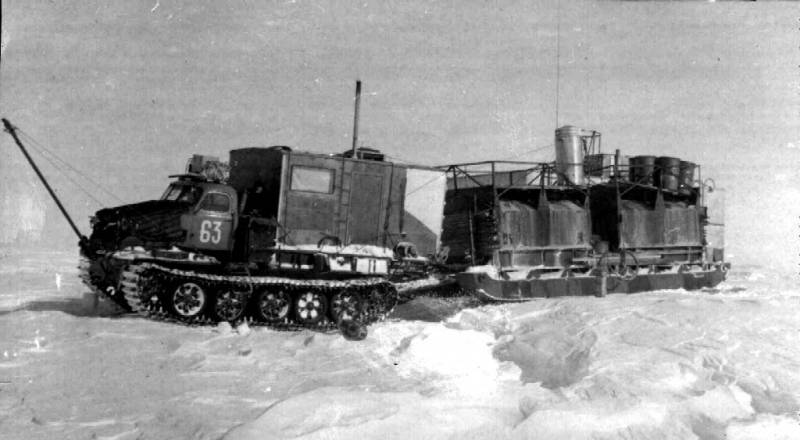 AT-TA in Antarctica. Source: auto.24tv.ua
In addition to insulating the cab, the tractor tracks were expanded to 750 mm (the pressure on the snow immediately dropped to 0,417 kg / cm2), repainted orange and put the diesel engine at 550 hp. On traditional AT-T, a derated for 415 hp was mounted. tank motor. Of course, in all cases variants of the 12-cylinder B-2 were used. The very first expeditions showed the inadequacy of the modernization carried out - the harsh conditions required even more specific equipment. The first deeply redesigned tracked vehicle for Antarctica was the "Penguin" based on the BTR-50P. The technique turned out to be much more successful than the AT-TA, but it was too cramped inside. 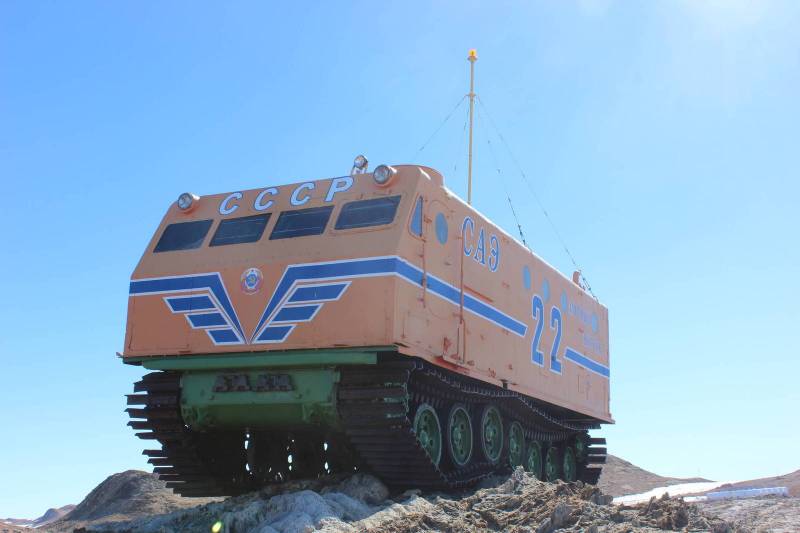 Source: 1gai.ru
The development of "Product-404", which will later become "Kharkovchanka", was carried out by the design group of the Kharkov plant under the leadership of engineers I. A. Borshchevsky and A. I. Minkov. The first copy of the Antarctic tractor appeared in 1957 and was a seriously revised AT-T design. The 35-ton car was placed on a seven-wheel chassis instead of five, and the layout itself was made wagon. Not the most optimal solution, given the tank V-2, which can smoke through all the joints - until the end of the production of the first series of "Kharkovchanka", the problem of gas pollution in the habitable space was not solved.

The Antarctic all-terrain vehicle could more accurately be called a house on caterpillars - in the 8,5-meter cabin there was a bedroom for six polar explorers, a kitchen, a vestibule, a drying and control room, a radio room, a navigator's office and a driver's workplace. With a ceiling height of 2,1 m, the total cabin area reached 28 sq. meters. The walls are duralumin with eight layers of nylon wool, each of which is covered with an airtight fabric. To protect against polar hurricanes at a speed of 50 m / s, all external and internal seams are sealed with putty and sealing tape. The inhabitants of the "Kharkovchanka" surveyed the monotonous landscape of Antarctica through nine portholes made of double organic glass. Pre-dried hot air was pumped between the glasses - this did not allow the windows to fog up even at minus 70. For the first time in domestic practice, the windows of the control compartment were equipped with electric heating - the elements were pressed directly into the glass. They worked especially hard on heating the compartments. The living volume of the cabin was 50 cubic meters. meters, and two air heaters drove all the internal air through the heaters four times per hour. Moreover, hot air was blown out even under the toilet bowl and drain holes.

"God is with us, party organizer and" Kharkovchanka ": 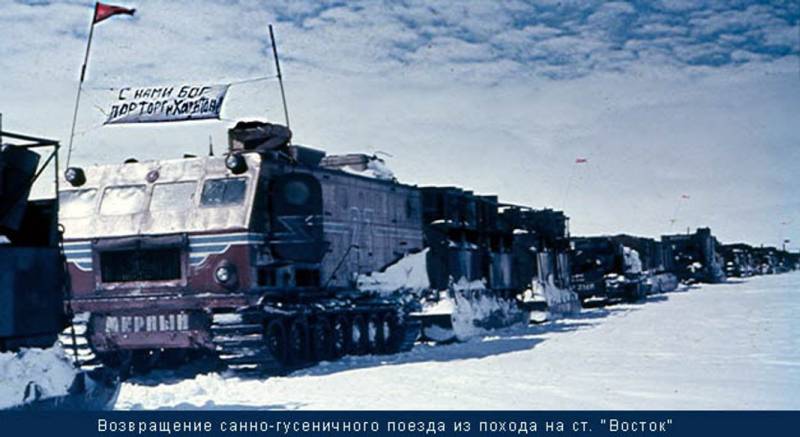 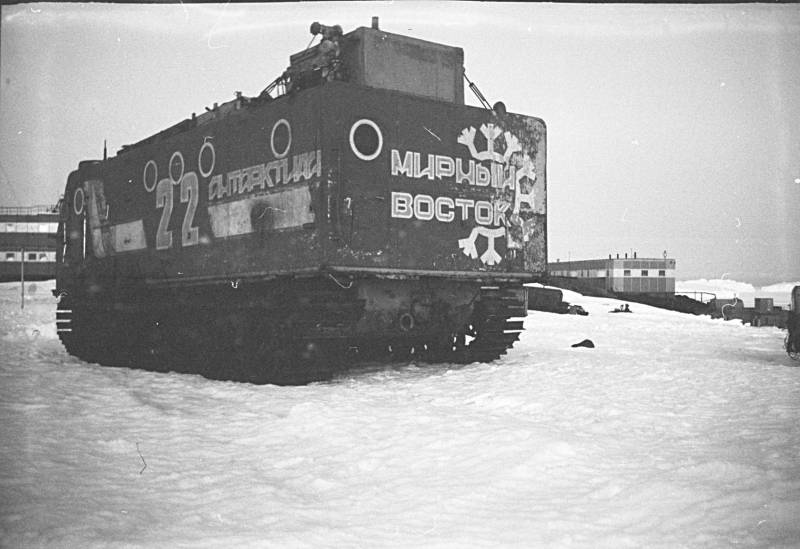 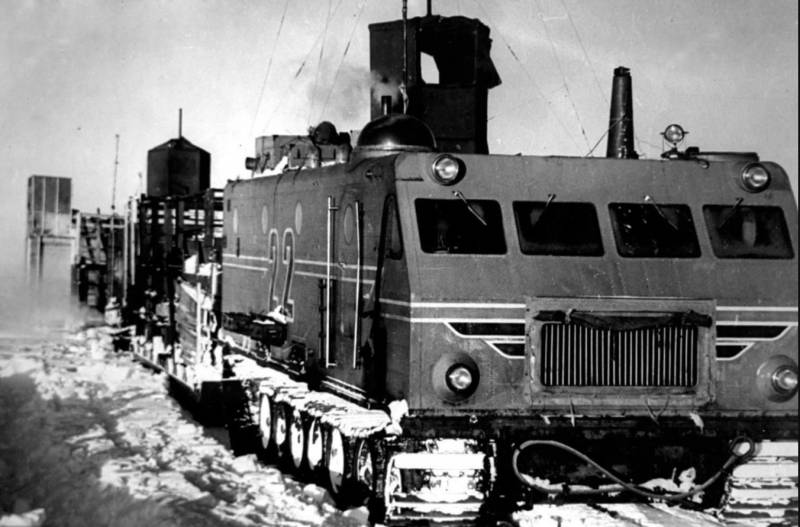 Source: pbs.twimg.com
A number of non-trivial solutions were also used in the engine compartment and the chassis. First, the track links were expanded to one meter, reducing the specific pressure to 0,306 kgf / cm2... Snow chains were a metal plate with a vertical transverse rib. However, all the tricks were imperfect - the expanders were simply cut off by autogenous parts of the cars. On the snow hummocks, they bent and impeded movement. Secondly, the diesel V-2 was pretty much modified and equipped with a turbocharger. In normal mode and in the parking lot, it turned off and the engine produced 520 hp, and in difficult conditions and with a lack of oxygen at high altitudes, the boost raised the power to almost 1000 hp. Eight tanks stored 2,5 thousand liters of fuel - this ensured the mileage of the all-terrain vehicle up to 1,5 thousand kilometers. At the same time, "Kharkovchanka" was dragging a 70-ton trailer on skis or tracks. The consumption of Arctic diesel fuel reached 12 liters per kilometer. An important feature of the tractor was the hull-boat, but it was not used for sailing under normal conditions. The task of the sealed hull was to rescue a tractor that had fallen through the ice. The 35-ton car went into the water along the waterline at the level of the cabin floor, could swim tolerably, and got out on land with a winch. 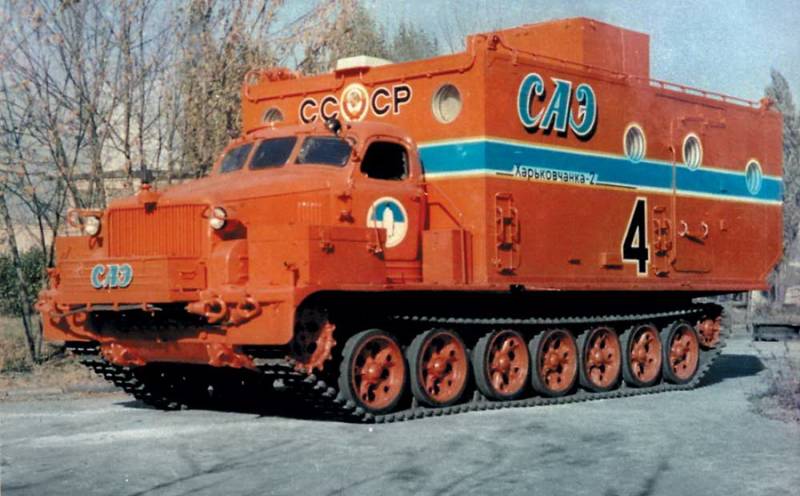 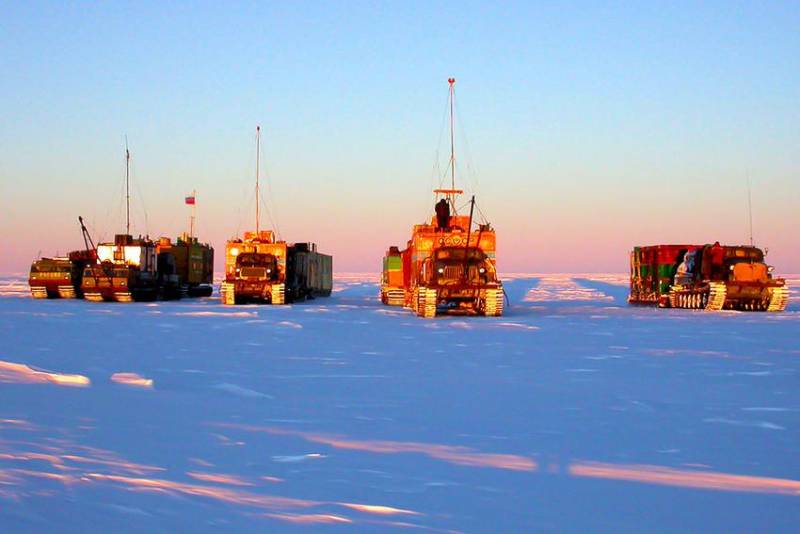 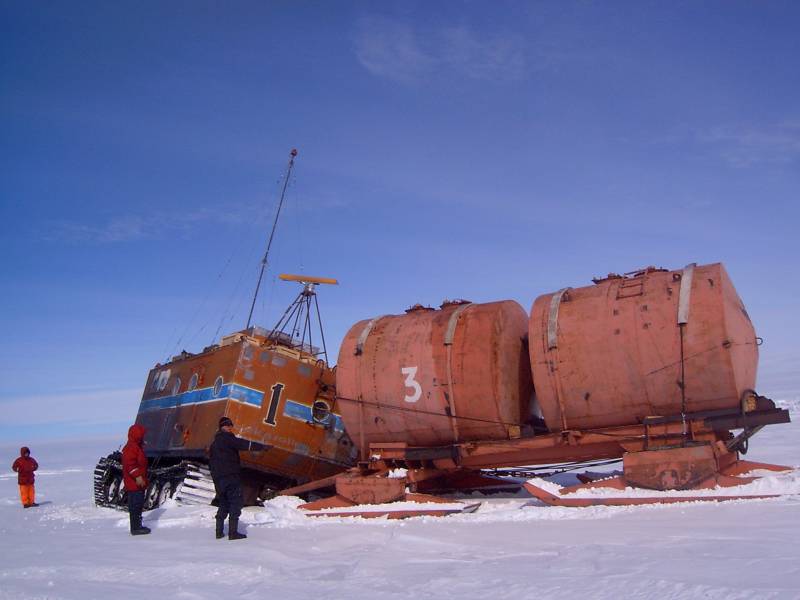 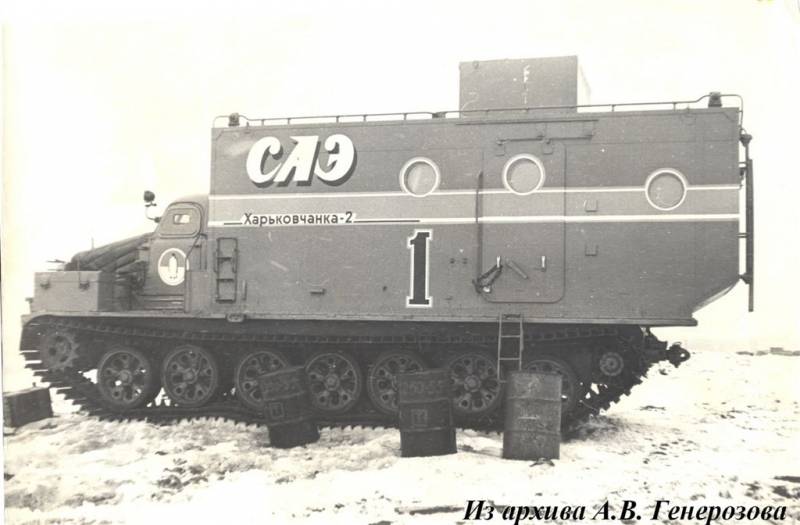 Source: sites.wrk.ru
"Kharkovchanka" in 1975 turned into "Product - 404C", or more traditional "Kharkovchanka-2". An inexperienced eye can confuse this tractor with the army progenitor AT-T - they took the cabin from the progenitor. Engineers abandoned the cabover layout and permanently solved the problem with exhaust gases bursting into residential compartments. We also improved the thermal insulation of the car, adding several layers of insulation.

The Antarctic "Kharkovchanka" has very well established itself in Antarctica, visited the South Geographic Pole, the Geomagnetic Pole and the Pole of Inaccessibility. The last cars were seen in working order in 2008.