The reasons for the creation of these weapons lie in the fact that after the release of the M95 was adjusted, as it turned out, the .50BMG munition behaves not at all as the manufacturer would like, and even the best of the best cartridges are inferior to .338 munitions at distances of up to one and a half kilometers. Not to mention the weight and dimensions of the weapon itself, from which the shot is made. Thus, such a weapon was ideal for firing at lightly armored enemy equipment, but for shooting at live targets was not the best approach. Pursuing the goal to create an accurate weapon that would be effective at a distance of up to 1500 meters, it was precisely when firing at enemy manpower that the development of the new M98 rifle was started. 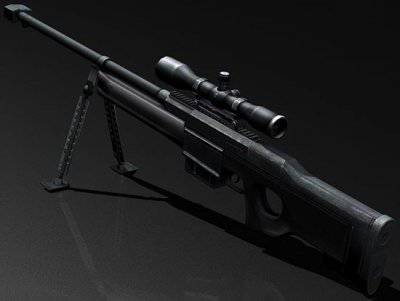 Making a bet on the presence of automatics in weapons, the manufacturer immediately sacrificed the effective range of use, the fastest planned was to replace some specific model of weapons that were in service with the US Army, but looking ahead, we say that this did not happen. The rifle itself turned out to be quite charismatic, the appearance of it really attracts, however, it immediately catches the eye that the barrel of the weapon is rigidly fixed to the forearm on which the bipod is mounted, and not freely hung, and this is again a minus of the effective range. In general, instead of the desired 1500 meters, it turned out 1200, all this thanks to the automaticity of the weapon, built according to the scheme with the removal of powder gases from the barrel, and the fastening of the rifle itself. A lot of attention was paid to the convenience of handling weapons, first of all it concerned the reduction of the rifle's weight, which is only 7 kilogram, while the length is equal to 1175 millimeters with the barrel length 610 millimeters. Weight reduction was achieved by introducing into the construction of a lightweight polyamide butt, the weapon's bed is made of a lightweight aluminum alloy. Recoil compensation when shooting occurs due to the muzzle brake-recoil compensator, and of course partially due to automation. The rifle is equipped with two folding bipods in the front of the forearm, and an additional third bipod can be installed under the butt. The trigger mechanism of the weapon can be adjusted for the force of pressing and the stroke of the trigger. The weapon has no open aiming devices; instead, a picatinny-type mounting bracket is installed. It feeds weapons from detachable box magazine with a capacity of 5 or 10 cartridges. Butt unregulated, also there is no adjustable stop for the cheek arrow.

The weapon as a whole turned out to be really quite good for its class, but no one became interested in them, everyone was satisfied with what was already in service, only a small batch of rifles was purchased for the police, after which the weapon was taken out of production. In principle, this is not surprising, since the M98 sniper rifle turned out to be good, but quite ordinary and did not stand out from dozens of similar models. It was also discontinued due to the fact that a bit later, another M98 appeared, with the prefix in the form of the letter B, and despite the similarity of the names, it was radically different from its almost namesake, and it became much wider. since it still managed to realize the very effective range in 1500 meters. 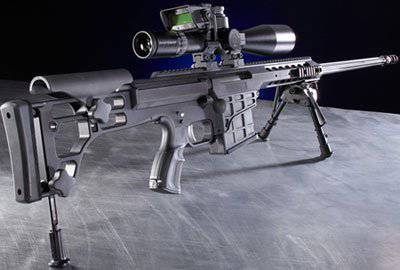 Officially, all the work on creating М98В or М98 Bravo was completed in 2000, but at the same time they became interested in it only in 2008. But at the same time the weapon did not gather dust in the form of a prototype, but was actively sold in the US civilian market and was supplied to the armies of other countries. It took 8 years for US military officials to notice this weapon, which won the competition for a new sniper rifle for the Marine Corps out of the competition, that is, the competition was announced, the rifle was presented and the competition was over. Since 2009, the mass production of these weapons has begun, and it continues now.

The main task that was set by the developers of this rifle was to create long-range high-precision weapons, capable of confidently striking the enemy's manpower at distances of up to one and a half kilometers, while the rifle was supposed to be compact and light. The basis for the new weapon was a longitudinal sliding gate, which enters the coupling with the breech breech, which reduces the load on the receiver and makes it almost foil, which naturally did not become, but made an easy, but durable version of aluminum alloy. If you look at the weapon more closely, you get the feeling that something like this has already been seen, and this feeling is not deceptive, since quite a lot of ideas were actually collected in the rifle that were used in other weapon variants. So, for example, the receiver is divided into two parts, which are fastened with just one pin located in front of the weapon shop, which sends us to the notorious M16, but we will not look for plagiarism where it is not in principle. The weapon is standardly equipped with three bipods, one of which is installed under the butt. The butt itself has a fairly convenient adjustment in length, in addition, the cheek support arrow is also adjustable in height. Just above the handle is a small fuse switch, duplicated on both sides of the rifle.

The length of the weapon is 1267 millimeters, the barrel itself has a length of 686 millimeters. The weapon can be transported both in the assembled and disassembled form, which will shorten the length and facilitate transportation. The rifle's weight is generally equal to the ridiculous value of the 6,1 kilogram, which is really not much for such a weapon. It feeds a rifle from a detachable magazine with a capacity of 10 cartridges. In addition to the long mounting bracket for almost the entire length of the receiver, the weapon also has two more short picatinny strips on the left and right sides, but this is more of a fad than a real necessity. The weapon has no open aiming devices, but they can be mounted on the upper mounting bar in case the telescopic sight fails. The truth here is to take into account very little distance between the same entirely and the front sight, but it’s better that way than there’s any way

The barrel of the rifle is cold forged, freely hung, has longitudinal valleys, the barrel bore is chrome-plated. As such, the recoil muzzle brake compensator does not have a rifle, instead it has a flame arrester. The choice in favor of the flame arrester was made in order for the DTC not to affect the accuracy of shooting, and of course it would be natural to at least minimally mask the position of the sniper. The trigger mechanism of the M98B rifle is modular; it can be easily removed with incomplete disassembly of the weapon for maintenance and adjustment. It is possible to adjust the trigger mechanism by the force of pressing the trigger and its stroke length.

If, in general, to characterize this rifle, then select something special is quite difficult. Speaking simply, this is the most elementary weapon, in which there is absolutely nothing new and remarkable, at the same time, this rifle has rather high characteristics due to the fact that it was made really high-quality and convenient for operation. Naturally, weapons are not for mass weapons, if only for the reason that it is expensive and "bolt". It should be noted right away that M98V was never positioned as “antimaterial”, as indicated in many Russian-language sources. Naturally, the engine of the machine, it may well smash, but still its main task is accurate shooting at the living targets of the enemy. 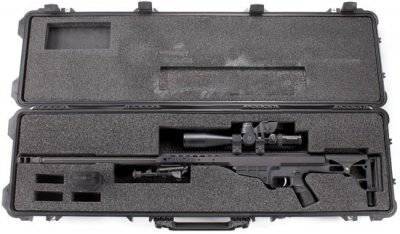 If you go back to the beginning of the article to M98, then you can’t say that it was a mistake of Barrett’s company, rather it was a “test of the pen” to find out whether such weapons are needed on the market at all, well, and the fact that money was spent on developing weapons and creating them of the final version, then all these costs paid off more than the next non-autoloading model. In general, if we talk about self-loading sniper rifles of the company, for some reason they are always unlucky with them and the result is lower than expected. It happened with the M82 family, later the M107, but at least they were widely spread, it also happened with the M82. Perhaps the main reason for such bad luck lies in the fact that production is adjusted to the minimum tolerances, which only have a positive effect in the simplest structures with a longitudinal sliding gate. In the case when everything is lapping to each other, the automation becomes unreliable and the probability of failure increases even with minimal pollution, which causes the manufacturer to blab everything that is possible. Naturally, everyone wants to find a balance, but the matter is very complicated and ungrateful, as the M98 self-loading rifle showed, which in fact did not interest anyone in spite of quite good characteristics. It remains to hope that the M98 did not discourage Roni Barrett and his employees from experimenting with calibers smaller than large and self-loading sniper rifles and, in the end, they will be able to produce weapons that you simply cannot find fault with if you wish and try. Although, of course, I would like the ideal sample to be born in domestic design bureaus and in the shortest possible time would fall into the hands of domestic military personnel.